Associations between erythropoietin polymorphisms and risk of diabetic microvascular complications

Figure 1 shows our study selection process. In total, 688 studies were retrieved from the PubMed, Embase, Cochrane library, Web of Science, Wanfang, and Chinese National Knowledge Infrastructure databases. Of these, 151 duplicates were excluded from this study. Another 493 studies were excluded after reviewing the titles and abstracts. 44 eligible studies were evaluated for full-text review. Of these, 35 were excluded due to non-reporting of available data, duplicate data, or because they were meta-analyses and case reports. Nine original articles containing 12 studies remained after full-text review (Tables 1–2) [14–22]. 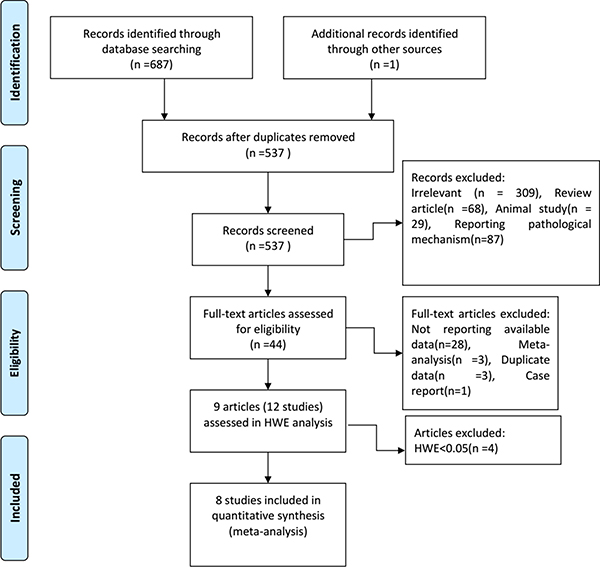 Table 1: Main characteristics of studies included in the meta-analysis, by EPO SNP

Table 2: Main characteristics of studies included in the meta-analysis, by individual study

Hardy-Weinberg equilibrium (HWE) was assessed via Chi-square test in the control subjects of each study. Genotype distributions among controls were consistent with HWE in only eight studies [15–20]. These eight studies, which investigated three SNPs (rs1617640, rs507392 and rs551238), were included in the final meta-analysis. The eight studies included 2,861 cases and 2,136 controls. Five studies focused on diabetic retinopathy, and three focused on diabetic retinopathy and end-stage renal disease. Four examined patients with type 2 diabetes mellitus (T2DM), and one examined patients with type 1 diabetes mellitus (T1DM). Four included patients of Asian descent, three included patients of American descent, and one included patients of Australian descent. According to the Newcastle-Ottawa quality assessment scale (NOS), quality scores ranged from 6–7, and the median score of the case-control studies was 6.5. 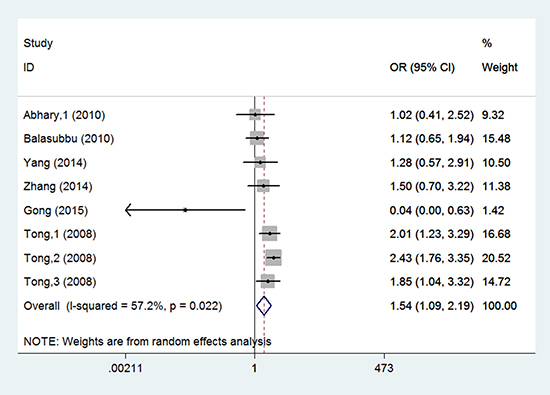 Figure 2: Forest plots of the association between rs1617640 polymorphisms and diabetic microvascular complication susceptibility. (TT vs. GG). Squares and horizontal lines correspond to the study-specific OR and 95% CI. The diamond represents the summary OR and 95% CI. 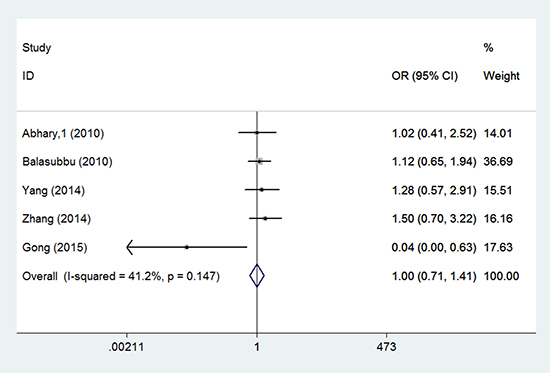 Figure 3: Forest plots of the association between rs1617640 polymorphisms and diabetic retinopathy susceptibility (TT vs. GG). Squares and horizontal lines correspond to the study-specific OR and 95% CI. The diamond represents the summary OR and 95% CI. 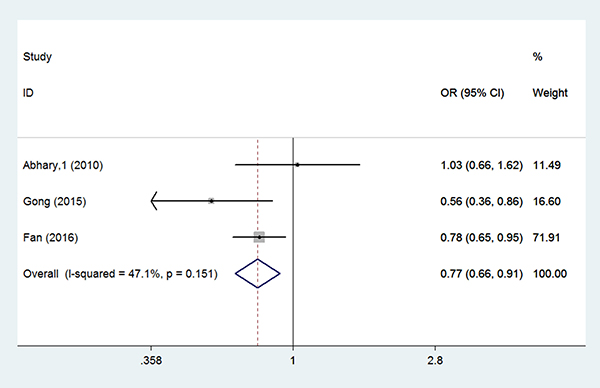 Figure 4: Forest plots of the association between rs551238 polymorphisms and diabetic retinopathy susceptibility (A vs. C). Squares and horizontal lines correspond to the study-specific OR and 95% CI. The diamond represents the summary OR and 95% CI.

Begg’s funnel plot and Egger’s test were employed to detect publication bias in this meta-analysis. We found no evidence of publication bias, with the exception of rs1617640 (TT vs. GG, TT vs. TG+GG), which exhibited a slight publication bias (Figure 5, Table 3). A sensitivity analysis was performed to examine the influence of excluding each study on the pooled ORs. The overall effects were not altered when each study was omitted, suggesting that our meta-analysis results were reliable (Figure 6). 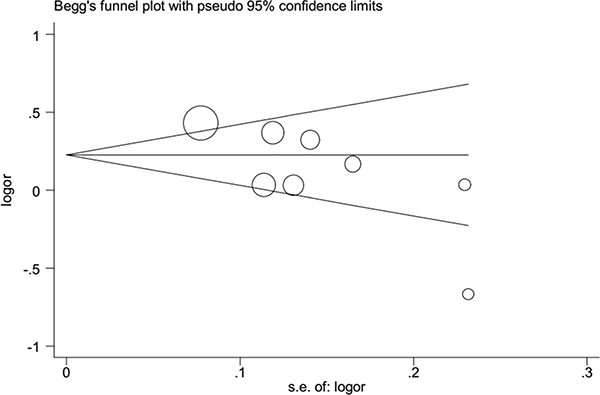 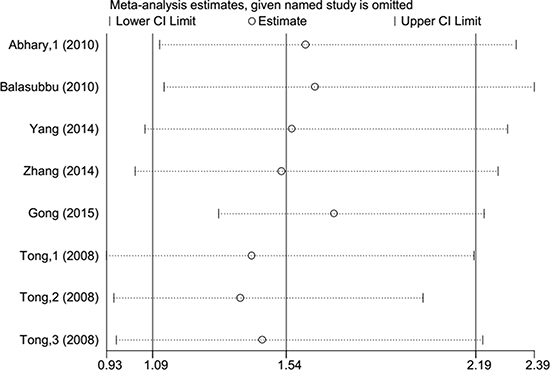 Figure 6: Sensitivity analysis of each study performed by omitting each data set from the analysis (rs1617640 TT vs. GG).

We searched several databases for relevant studies assessing the association between the EPO polymorphisms and diabetic complications. Our analysis included eight studies with a combined total of 2,861 cases and 2,136 controls. These studies were conducted between 2008 and 2015 to investigate the association between EPO polymorphisms and diabetic retinopathy and nephropathy. Tong, et al. suggested an association between the T allele of SNP rs1617640 and proliferative diabetic retinopathy as well as end-stage renal disease [19]. Gong associated higher diabetic retinopathy risk with carrying the TT/GT genotype and T allele at the EPO gene site rs1617640 [20]. Abhary, et al. concluded that all three EPO SNPs (rs507392, rs1617640, and rs551238) were associated with diabetic retinopathy risk independent of duration of DM, degree of glycemic control, and nephropathy [16]. However, some studies found no associations [15]. In our study, the pooled results indicated a relationship between rs1617640 polymorphisms and diabetic complications (genotype model: TT vs. GG: OR = 1.544, 95% CI = 1.089–2.189, P = 0.015).

Our subgroup study stratified by complication type showed that rs1617640 polymorphisms were associated with diabetic retinopathy and end-stage renal disease. However, the association with diabetic retinopathy was not significant in any model. Only one study evaluated T1DM in Australian populations, so we were not able to evaluate statistical significance in this case.

Our meta-analysis had some limitations. First, the number of included studies was relatively small. rs1617640 polymorphisms were examined in eight studies, and rs507392 and rs551238 polymorphisms were investigated in one and three studies, respectively. Previous studies demonstrated that EPO variations played roles in DR and DN development [19, 26], and different results were found for T2DM and T1DM. Thus, we performed a subgroup study stratified by complication type, DM type, and ethnicity. However, some of our stratified analyses were limited by small sample sizes. Three studies focused on DR and DN. Only one study assessed T1DM in an Australian population. There were some differences between cases and controls, including patient age, gender, duration of DM, HbA1c level and BMI (Table 2). Stratification analyses based on differences in DM duration, gender, or other factors could not be performed because of limited sample sizes. Data from large, multi-center studies, including DM severity, ethnicity, and other complications and factors, are needed to confirm these relationships. Second, due to the limited number of studies, we did not investigate publication bias for the rs551238 polymorphism. A small publication bias was detected for the rs1617640 polymorphism in some models (TT vs. GG, TT vs. TG + GG), indicating that some unpublished studies might have been overlooked. Third, heterogeneity was found between the rs1617640 polymorphism studies; however, we could not conduct subgroup analyses to investigate the heterogeneity source due to the limited number of studies. Finally, we did not examine other risk factors, such as environmental effects and genetic factors.

Relevant studies were retrieved from the PubMed, Embase, Cochrane library, Web of Science, Wanfang, and Chinese National Knowledge Infrastructure databases. The last search was performed on August 22, 2017, with keywords including (“erythropoietin” OR “erythropoietin-generating factor” OR “renal erythropoietic factor” OR “erythropoitin-generating factor” OR “EPO” OR “rs1617640” OR “rs507392” OR “rs551238”) AND (“gene” OR “Polymorphisms, Genetic” OR “Polymorphisms, Genetic” OR “Genetic Polymorphism” OR “Polymorphism (Genetics)” OR “Genetic Polymorphisms” OR “Polymorphism” OR “genetic” OR “allele” OR “variation” OR “variant” OR “mutation”) AND (“Diabetes” OR “Diabetes-Related ” OR “Diabetic ”) AND (“Complication” OR “Complications” OR “Disease, Retinal” OR” Diseases, Retinal “ OR “Retinal Disease” OR “retinopathy” OR “nephropathy” OR “ Disease, Kidney” OR “ Kidney Disease” OR “vascular” OR “Blood Vessel” OR “Vessel, Blood” OR “Vessels, Blood” OR “Neuropathy” OR “Neuropathies” OR “Neuralgia” OR “Neuralgias” OR “Cardiomyopathy” OR “Myocardial Diseases” OR “Disease, Myocardial” OR “Diseases, Myocardial” OR “Myocardial Disease” OR “Myocardiopathies” OR “Myocardiopathy”). We also manually searched the reference lists of relevant reports to identify additional studies.

All selected studies in this analysis met the following criteria: (1) case-control studies; (2) explored the correlation between EPO polymorphisms and diabetic microvascular complications; and (3) contained sufficient data for calculating odds ratios (ORs) and 95% confidence intervals (95% CIs). Exclusion criteria were as follows: (1) studies without Hardy-Weinberg equilibrium (HWE) in the control groups; (2) studies not relevant to diabetic complications or lacking a control population; and (3) studies lacking sufficient data for quantitative analyses.

Two investigators (Li H and Xu HP) independently reviewed all articles and extracted available data from individual studies. Any discrepancies were resolved by discussion between these two investigators. The following information was extracted from each eligible study: (1) first author, (2) year of publication, (3) country of origin and ethnicity of study participants, (5) type of diabetes mellitus and complications, (6) genotyping method, (7) number of cases and controls, (8) polymorphism and genotype distribution, and HWE for controls. We assessed the quality of each eligible study according to the Newcastle-Ottawa quality assessment scale (NOS) [27]. Quality score ranged from 0–9.

HWE was assessed via Chi-square test in the control populations of each study. Pooled ORs and corresponding 95% CIs were calculated to estimate associations between EPO polymorphisms and diabetic microvascular complications. Z test was used to assess the overall effect and P < 0.05 was considered statistically significant. The strength of the association was determined using the following models: allele model (T vs. G, T vs. C, A vs. C), genotype model (TG vs. GG, TT vs. GG, TC vs. CC, TT vs. CC, AC vs. CC, AA vs. CC), dominant model (TT/TG vs. GG, TT/TC vs. CC, AA/AC vs. CC), and recessive model (TT vs. TG/GG, TT vs. TC/CC, AA vs. AC/CC). Subgroup analyses were conducted according to ethnicity, type of diabetes mellitus, and complication. We used the Q-statistic and I2 statistic to evaluate statistical heterogeneity among studies [27]. P ≥ 0.1 and I2 < 50% suggested a lack of heterogeneity among studies. A random-effect model was used through the DerSimonian and Laird method in the presence of heterogeneity (P < 0.1 or I2 > 50%); otherwise, a fixed-effect model based on the Mantel-Haenszel method was employed (P ≥ 0.1 or I2 < 50%). We conducted a sensitivity analysis to assess the stability of the results. Egger’s test and Begg’s funnel plot were used to evaluate publication bias. Analyses were performed using STATA version 11.0 software (Stata Corporation, College Station, TX, USA).

This research received no specific grant from any funding agency in the public, commercial, or not for-profit sectors.

7. Kalantar-Zadeh K. History of Erythropoiesis-Stimulating Agents, the Development of Biosimilars, and the Future of Anemia Treatment in Nephrology. Am J Nephrol. 2017; 45:235–247.