Dynamic enhanced CT: is there a difference between liver metastases of gastroenteropancreatic neuroendocrine tumor and adenocarcinoma

Gastroenteropancreatic neuroendocrine tumors (GEP NETs) arise from the diffuse endocrine system of gastro-intestinal tract and pancreatic islet cells [1]. According to the 2010 WHO classification, GEP NETs involve well-differentiated category tumors (Grade1- Grade 2) with mitoses≤20 and Ki-67≤20% [2]. Some GEP NETs produce peptides causing specific syndromes. But quit a lot of them are non-functioning or synthesizing more than one peptide, mostly are not associated with characteristic hormonal syndromes [3]. Although GEP NETs have low to intermediate pathological grades and exhibit indolent clinical behaviors, they frequently present metastatic disease at diagnosis and the liver is the most involved site [3, 4]. Metastatic NETs show an optimistic long-term outcomes (5-year survival > 50%) after aggressive surgical or effective non-surgical treatment options such as somatostatin analogues, peptide receptor radiotherapy, and intra-arterial therapies [5-7]. Adenocarcinomas of GEP are the most common primary tumor of liver metastases. In patients with liver metastases from GEP adenocarcinomas, acceptable 5-year overall survival only achieved after the resection of colorectal liver metastasis [8]. For the liver metastases of other primary tumor such as gastric cancer or pancreatic cancer, the long-term outcomes are still poor [9]. Therefore, considering that there is a definite survival benefit of local treatments or surgical for metastatic NETs, the differentiation of liver metastases between the GEP NETs and GEP adenocarcinomas may be clinically noteworthy.

As the first line imaging modality, the dynamic enhanced computed tomography (CT) play an important role in the assessment of the stage of GEP NETs. Besides lesion detecting, several previous studies have addressed the values of CT findings, including shape and enhancement features, in the pathological differentiation of GEP NETs [10, 11]. As NETs are commonly hypervascular tumors unlike adenocarcinomas, metastatic NETs may also show hypervascularity on hepatic artery phase CT images. We hypothesized that CT features such as the enhancement degree may be helpful for the differentiation of liver meatastases of GEP NETs from GEP adenocarcinomas. The purpose of our study was to evaluate the value of dynamic enhanced CT features in characterization of difference between liver metastases of GEP NETs and adenocarcinomas. 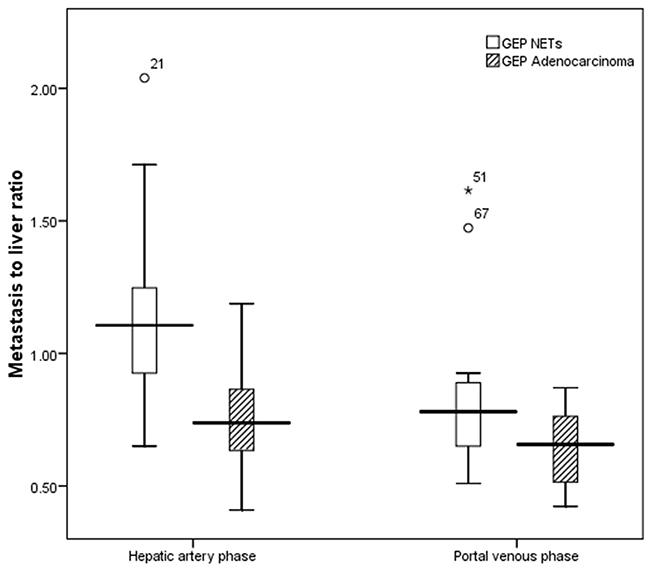 For the subjective CT imaging features, the character of enhancement on hepatic artery phase (P=0.017), dynamic enhancement pattern (P<0.001) and presence of lymphadenopathy (P=0.038) were significantly different between liver metastases from GEP NETs and from GEP adenocarcinoma (Figures 2-5). The inter-observer variability for subjective analysis ranged from substantial to perfect (for distribution type κ= 0.938, shape κ= 0.789, enhancement on hepatic artery phase κ= 0.775, dynamic enhancement pattern κ= 0.914, and lymphadenopathy κ= 1.000) (Table 1). A perfect ICC was achieved for all objectively measured variables(0.864 for tumor size, 0.919 for CT value of tumor and 0.903 for CT value of adjacent normal liver parenchyma). Finally, the first observer(Y.C.)’s measurement was used for the following analyses. 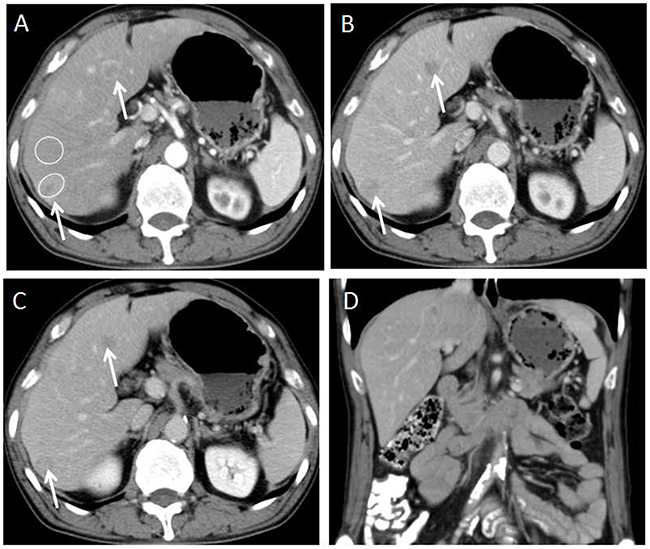 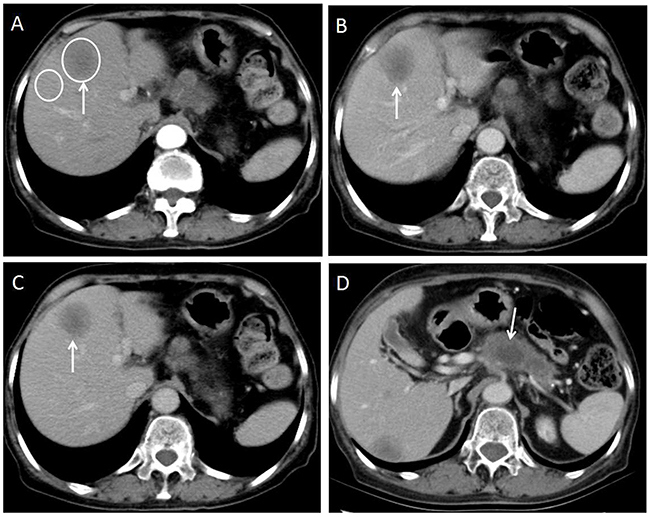 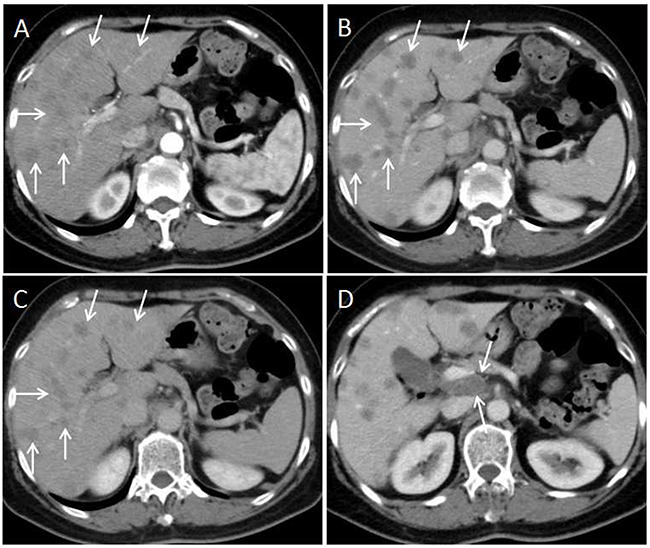 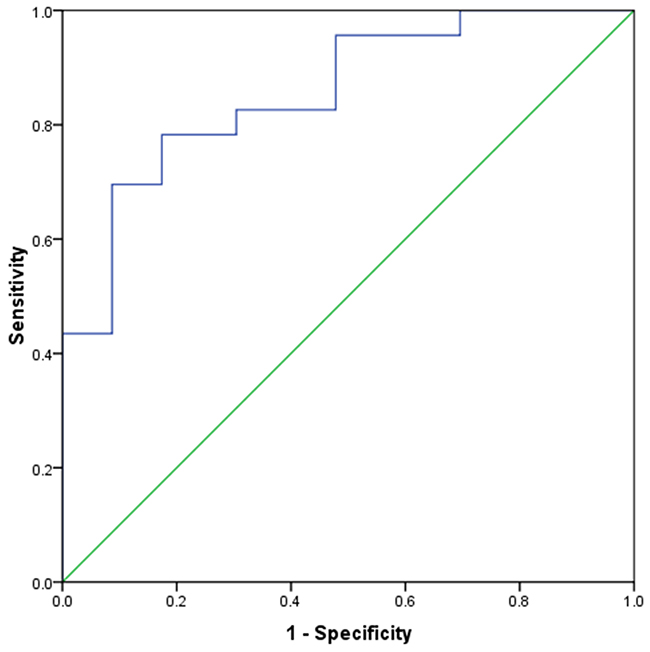 And to the pattern of enhancement, most of liver metastases of GEP NETs demonstrated as washout pattern (15/23), followed by plateau pattern(6/23), contrarialy majority of the liver metastases from adenocarcinomas were plateau pattern(21/23). The pattern of enhancement of liver NETs have been reported in the study of Kim et al. [20], 16 of 34 liver NETs showed enhancing nodule on the hepatic artery phase and washout during the portal and equilibrium phases, and 9 of 34 demonstrated as heterogeneously enhancing nodule on hepatic artery phase, which showed delayed enhancement during the portal and equilibrium phases. Our result well coincided with those investigations that GEP NETs liver metastases showed various enhancement patterns. These findings are believed to be associated with the different degree of fibrosis within the tumors, and that may be the result of combination of vasogenic and fibrogenic activities [21].

In the present study, the present ratio of lymphadenopathy of GEP NETs was lower than that of adenocarcinomas (30.4% vs. 60.9%). The GEP NETs mainly demonstrated a better biology with less lymph node metastases. In the previous studies, lymphadenopathy were found in up to 22.2% of gastric NETs [15], 34.5% of pancreatic NETs [22], and 30.0% in the resectable colorectal NETs [23]. On the contrary, more than 50% of gastric cancer patients have lymph node metastases at diagnosis [24-27]. About 30%–40% lymph nodes of rectal cancer present with invasion [28] and 56% of patients had lymph node metastases in the resectable pancreas adenocarcinomas [29]. It seems that the higher malignancy and stronger invasion of adenocarcinomas can account for this difference.

The present study had some limitations. First, the number of patients in our study was limited by the relatively low incidence of NETs, rendering stratified comparison of patients of different primary location. Second, this was a retrospective study; the start of dynamic enhanced CT used fixed delay time. To eliminate the incoordination of scanning phase, we excluded the cases with insufficient image quality and used enhancement ratio in analysis. Third, pathology result could not be obtained for each of the liver metastases lesions. In some cases, clinical diagnosis were applied, which was also acceptable in previous studies [16]. Our results are promising but should be considered as hypothesis-generating rather than definitive, and prospective studies using novel analysis methods such as radiomics should be conducted in the future.

In conclusion, the subjective and objective features of dynamic enhanced CT are helpful to differentiate liver metastases of well-differentiated GEP NETs from that of GEP adenocarcinomas.

This retrospective study was approved by our institutional review board and the requirement for informed consent was waived. Patients’ records of the radiology and pathology departments of our institute from January 2009 through February 2016 were reviewed and cross-referenced. To create a study group of liver metastases of GEP NET, the following inclusion criteria were used: (a) pathological diagnosis of GEP NET, (b) available dynamic enhanced CT images within 4 weeks of pathology, and (c) liver metastases were confirmed on pathology or based on a combination of CT findings and serial imaging or multi-modality imaging such as somatostatin receptor scintigraphy, Gallium-68 positron emission tomography (PET)/CT, determined by a consensus of two experienced abdominal radiologists (Y.C. and S-Y.G., both with more than 15 year experience). In this study, we excluded patients whose primary tumor was not from the GEP, or who had prior treatment before the current CT scan, or insufficient image quality. Finally, 23 patients with pathologically proven GEP NET were enrolled in this study (Figure 7). To serve as the control group, we systemically sampled patients with a diagnosis of GEP adenocarcinomas liver metastases from the patients’ records between the same periods at our institute. These patients fulfilled the criteria: (a) pathological diagnosis of GEP adenocarcinomas, (b) liver metastases was confirmed pathologically or clinically (by using serial image examinations that showed rapid progression of the lesions) and (c) had dynamic enhanced CT images. Patients had treatment before CT exam were excluded. Each patient was given a random number and then sorted by their numbers. Following the order, the first 23 patients matched in term of primary site, age and sex constituted the liver metastases study group of GEP adenocarcinomas. Thus, our retrospective study included 23 patients (13 men,10 women; mean age, 54.43 ±12.34 years; age range, 34-77 years) of liver metastases from GEP NETs and 23 patients (13 men,10 women; mean age, 55.74 ± 9.56 years; age range, 39-74 years) of liver metastases from GEP adenocarcinomas. Each group had the same proportions of primary sites of liver metastases: gastric (n=4), small bowel (n=2), colorectal (n=9), and pancreas (n=8) in each group. For the GEP adenocarcinomas, the pathological grades were well-moderately differentiated in 2 cases, moderately differentiated in 8 cases, moderately-poorly differentiated in 9 cases, and poorly differentiated in 4 cases. 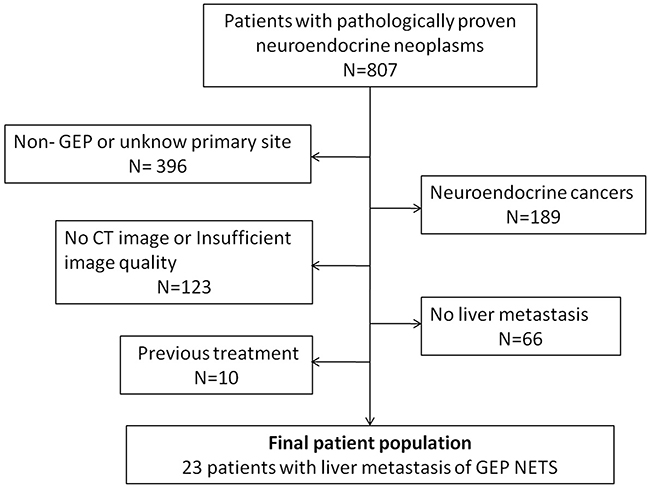 CT was performed with a 64 multidetector CT (MDCT) scanner (LightSpeed VCT or Discovery 750HD, GE Healthcare, Milwaukee, WI, USA) or a 256 MDCT (iCT, Philips Healthcare, Cleveland, USA). Each patient fasted for 6 hours before undergoing CT. After the initial non-enhanced scan, about 100-150 ml (600 mg iodine/kg body weight) of iopromide (Ultravist 300; Schering, Berlin, Germany) or iohexol (Omnipaque 300; Nycomed, Princeton, NJ, USA) through an angiographic catheter inserted into an antecubital vein was administered at a rate of 3 ml/sec by using an automatic power injector. Dynamic enhanced CT scans were obtained 25-30 seconds (hepatic artery phase), 70-75 seconds (portal venous phase) and 150 seconds (equilibrium phase) after the initiation of the intravenous contrast material injection. The scanning range included the upper part of the abdomen from the level of the hepatic dome to the iliac crest. The main scanning parameters of the three scanners were uniform included the following: 120 kVp, automatic tube current modulation, and a tube rotation time of 0.5-0.75 second. Images were displayed in the axial plane with a slice thickness of 5 mm, and multiplanar reformatted images were available for all patients.

All the pathological diagnoses were confirmed by a pathologist (Z-W.L.) with 10 years of experience in gastrointestinal pathology, who was blinded to all clinical information and imaging findings. Pathological tumor grades were determined according to the WHO classification [2] by counting the number of mitoses per 10 high-power fields and the Ki-67 index (percentage of positive cells in the areas of highest nuclear labeling).

The analysis was performed using SPSS software (version 16.0; SPSS, Chicago, IL, USA). The χ2 tests or the Fisher’s exact test was used for comparison of the subjective interpretation and the independent t-test was used to compare the objective measurement between the two groups. Independent factors for differentiating were evaluated using the logistic regression model with backward selection. Receiver operating characteristic (ROC) curves were employed to evaluate the performance of CT features above in the discrimination of the two groups, and area under ROC(AUC) was calculated. An AUC>0.75 suggested clinically useful. The cut-off value was determined by using the maximum Youden’s index method. We performed a simple κ analysis to assess inter-observer agreement for subjective variables and calculated intra-class correlation coefficient(ICC) for objective variables. A kappa or ICC of 0.81-1.0, 0.61-0.80, 0.41-0.60, 0.21-0.40 or 0.0-0.20 suggested perfect, substantial, moderate, fair or poor agreement. For all tests, a P value <0.05 was considered to indicate statistical significance in all analyses.

No, there is no conflicts of interest that I should disclose, having read the above statement.