Using immunohistochemistry, we previously demonstrated that a high number of CD204-positive TAMs infiltrating the tumor site are significantly associated with the histological grade, depth of tumor invasion, vessel invasion, lymph node metastasis, clinical stage, and poor prognosis in ESCC patients [13]. To explore the interaction between ESCCs and TAMs, we compared gene expression profiles between peripheral blood monocyte (PBMo)-derived macrophages and PBMo-derived macrophages stimulated with conditioned media of TE-series ESCC cell lines (TECM) (TAM-like PBMo-derived macrophages) by performing a cDNA microarray analysis [14]. Among up-regulated molecules, we previously demonstrated that GDF15 was associated with poor prognosis, promoting the migration of ESCC cells [14] and that NCAM accelerated the migration and survival of TAM-like PBMo-derived macrophages [15].

In the present study, we focused on one of the up-regulated genes in TAM-like PBMo-derived macrophages, C-X-C motif chemokine ligand 8 (CXCL8). CXCL8 is also known as interleukin-8 (IL-8), and it activates receptors CXCR1 and CXCR2. CXCL8 was reported to be associated with tumor progression in breast cancer [16], colorectal cancer [17], non-small cell lung cancer [18], gastric cancer [19] and melanoma [20]. However, the interaction between CXCL8 derived from TAMs and ESCCs has not been established. Our present findings demonstrate the critical role and biological effect of CXCL8 derived from TAMs in the ESCC microenvironment.

We confirmed the expressions of CXCR1 and CXCR2 (which are CXCL8 receptors) on the ESCC cell lines (TE-8, TE-9 and TE-15) by RT-PCR (Figure 2A) and western blotting (Figure 2B), respectively. To investigate the effect of CXCL8 on the post-receptor signaling of ESCC cells, we applied rhCXCL8 at 10 ng/ml to TE-8, TE-9 and TE-15 under serum-free conditions. We observed the phosphorylation of Akt (Ser473/Thr308) (the PI3K-Akt signal pathway) and Erk1/2 (the MEK-Erk1/2 signal pathway) after 10 min (Figure 2C). 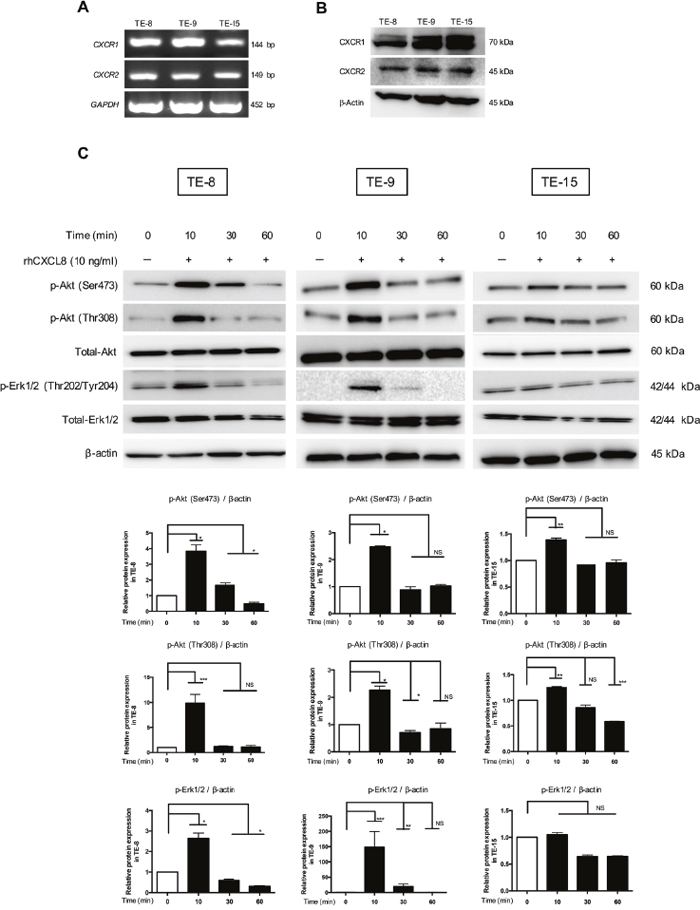 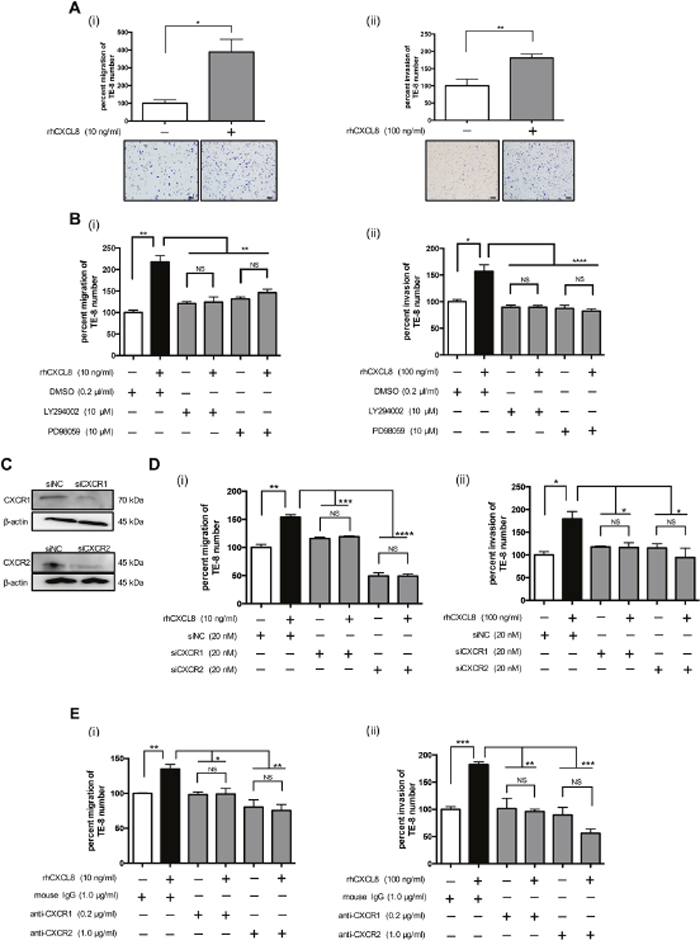 Inhibitors against PI3K and MEK1/2 and neutralizing antibodies against CXCL8, CXCR1, and CXCR2 suppressed the migration and invasion of TE-8 and TE-9 cells induced by TAM-like PBMo-derived macrophages 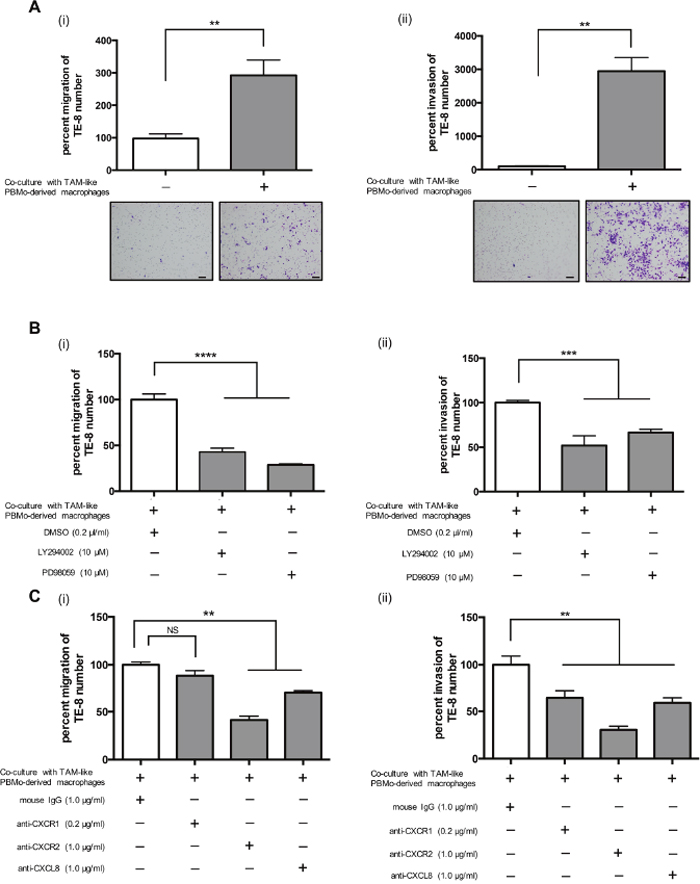 We examined the expression of CXCL8 in human ESCC tissue samples. Immunofluorescence demonstrated that a large fraction of the CXCL8-positive spindle cells co-expressed with the macrophage marker CD11b in the tumor nests and stroma of human ESCCs (Figure 5A, Supplementary Figure 6A). We observed CXCL8 expression in normal squamous epithelia and tumor nests, particularly in the invasive area, by immunohistochemistry. We observed various levels of CXCL8 immunoreactivities in cancer nests (negative, low and high) using corresponding normal squamous epithelia as a positive control (Figure 5B, Supplementary Figure 6B). 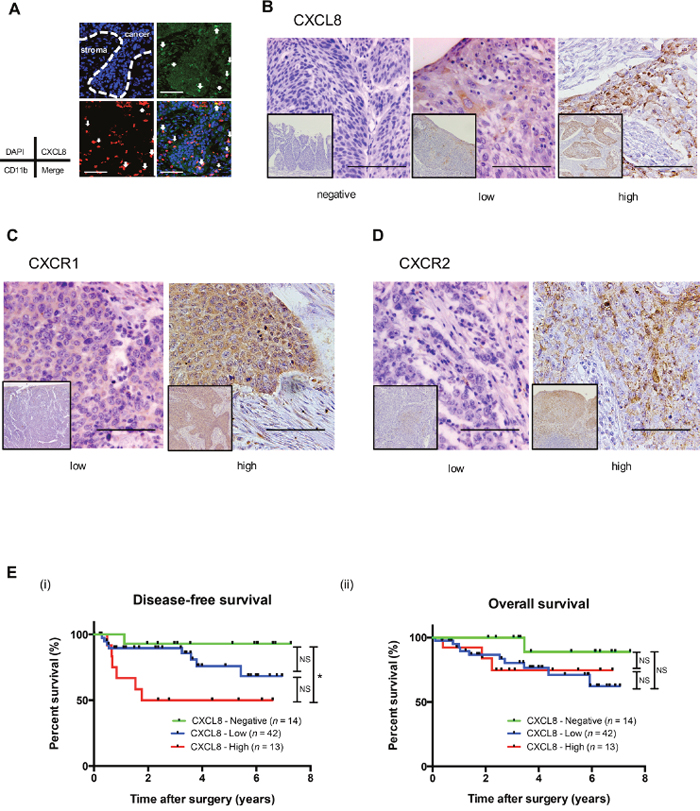 Table 1: Expression level of CXCL8 in ESCC and their correlation with clinicopathological data and infiltrating macrophages phenotypes

aExpression of CXCL8 in invasive area of ESCC tissue was divided into three groups according compared with the corresponding normal esophageal epithelia; Negative, Low and High.

cAccording to the TNM classification by UICC.

dThe median values of CD68 positive, CD163 positive or CD204 positive macrophage numbers in cancer nests and stroma within the areas were used to divide the patients into low- and high-groups.

The overall survival of the patients was not significantly different among the negative-, low- and high-expression CXCL8 groups (p = 0.25) (Figure 5E (ii)). A significant independent impact of CXCL8 on the DFS rate was not revealed by the multivariate analysis in ESCC (Table 2). The expressions of CXCR1 or CXCR2 were not related to DFS or overall survival by log-rank test (Supplementary Figure 7).

bAccording to the TNM classification by UICC.

cThe median values of CD68 positive, CD163 positive or CD204 positive macrophage numbers in cancer nests and stroma within the areas were used to divide the patients into low- and high-groups.

CXCL8, also known as IL-8, belongs to the C-X-C motif chemokine family. The CXCL8 gene encodes for a protein of 99 amino acids, and it is processed to active proteins of either 77 amino acids in nonimmune cells or 72 amino acids in immune cells. CXCR1 and CXCR2, G protein-coupled receptors, are known as CXCL8 receptors and are characterized by seven-transmembrane-spanning regions. CXCR1 is a receptor for CXCL6 and CXCL8, whereas CXCR2 is a receptor for not only CXCL8 but also CXCL1, CXCL2, CXCL3, CXCL5, CXCL6 and CXCL7 [21, 22]. Previous research demonstrated that CXCL8 binds to CXCR1 or CXCR2 and activates the PI3K-Akt and MEK1/2-Erk1/2 signaling pathways [23].

It has been revealed that CXCL8 promoted cell migration and/or invasion in human gastric cancer [32], colon cancer [33], breast cancer [34], hepatocellular carcinoma [35] and prostate cancer in vitro [36]. CXCL8 has also been reported to promote the proliferation of human colon cancer [37], prostate cancer [38] and breast cancer cells [34]. In the present study, we demonstrated for the first time that rhCXCL8 significantly induced the migration and invasion of human ESCC cell lines. rhCXCL8 had no effect on the proliferation of the human ESCC cells. As was reported regarding a papillary thyroid carcinoma cell line [39], CXCL8 might have different functions depending on the origin and histological types of cancer cells.

Earlier studies indicate that CXCL8 derived from TAMs is associated with tumor progression. Using a cytokine array analysis, Fang et al. [39] reported that the CXCL8 expression of TAMs which were isolated from human thyroid papillary cancer tissue was up-regulated in comparison with that of peripheral blood monocytes from healthy donors. They observed that rhCXCL8 promoted the invasion of papillary thyroid carcinoma cell lines, K1, TPC-1 and BCPAP in vitro. They also reported that BCPAP injected into tail vein of rhCXCL8-treated mice tended to metastasize to lung compared to the control mice [39].

CXCR2 is known as multiple C-X-C motif chemokine receptor. Wang et al. showed that CXCL1, one of the ligands to CXCR2, is involved in the migration and invasion of gastric cancer cells in vitro [42]. Using immunohistochemistry, they also showed that the expression level of CXCL1 in human gastric cancer tissues was associated with lymph node metastasis and TNM classification. Zhao et al. reported that the CXCL5-CXCR2 axis promoted the migration of human colorectal cancer cells in vitro and increased liver metastasis from the injected tumor of mice spleen in vivo [43]. Neutralizing antibody against CXCR2 demonstrated a stronger suppressive effect on the phenotypes of ESCC cell lines induced by TAM-like PBMo-derived macrophages compare to the antibodies against CXCR1 and CXCL8. Targeting CXCR2 to suppress the migration and invasion of ESCC cells by inhibiting the function of not only CXCL8 but also other C-X-C motif chemokines derived from TAMs may be a rather effective therapy for ESCC.

In conclusion, we demonstrated that CXCL8 derived from TAM-like PBMo-derived macrophages promoted the migration and invasion of ESCC cell lines via the phosphorylation of Akt and Erk1/2 through CXCR1 and CXCR2 in vitro. A high expression level of CXCL8 in TAMs and ESCC cancer cells was strongly associated with poor prognosis through lymph node metastasis. Targeting the CXCL8-CXCR1/CXCR2 axis in human ESCC tissues might be an effective new therapy (Figure 6). 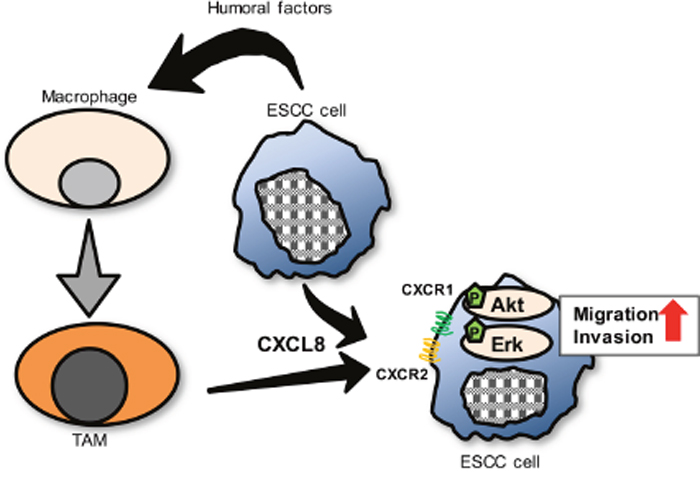 Figure 6: A proposed model of the interaction between ESCC cells and TAMs through CXCL8 in tumor microenvironment. Many humoral factors, including IL-4, induced macrophages into TAMs. Then, expression level of CXCL8 was up-regulated in TAMs. CXCL8 secreted from TAMs, as well as from ESCC cells, contributed ESCC cells’ migration and invasion by activating Akt and Erk1/2 signals through CXCR1/CXCR2 of ESCC cells.

Three ESCC cell lines (TE-8, TE-9 and TE-15) were obtained from the RIKEN BioResource Center (Tsukuba, Japan) [47]. Het-1A is a normal human squamous esophageal cell line transfected non-tumorigenic SV40-T. We purchased it from American Type Culture Collection® (Manassas, VA, USA) [48]. The individuality of the TE series ESCC cell lines was confirmed by a short tandem repeat (STR) analysis at RIKEN and at the Cell Resource Center for Biomedical Research, Institute of Development, Aging and Cancer, Tohoku University in 2009 and 2010 (Sendai, Japan). All TE cells were confirmed to be mycoplasma-negative by a Venor® Gem Classic Mycoplasma Detection kit (Minerva Biolabs, Berlin, Germany). Het-1A was confirmed not to have human pathogenic virus using PCR-based assay for HIV, HepB, HPV, EBV and CMV. We maintained the ESCC cell lines in RPMI-1640 (Wako, Osaka, Japan) with 10% fetal bovine serum (FBS) (Sigma-Aldrich, St Louis, MO, USA) and 1% antibiotic-antimycotic (Invitrogen, Carlsbad, CA). Het-1A cell line was cultured in BEGM™ (Lonza, Walkersvile, MD, USA). The conditioned medium of TE series (TECM) and Het-1A CM was prepared by plating 5 × 106 tumor cells in 10 ml of complete medium in 100-mm dishes for 24 h, and the medium was then changed to complete DMEM (Wako) with 10% human AB serum (Lonza, Walkersville, MD). After 2 days, the supernatants were harvested, centrifuged, and stored in aliquots at − 80°C.

A total of 70 human ESCC tissue samples excised from 2005 to 2010 at Kobe University Hospital (Kobe, Japan) were used in this study. Informed consent for the use of tissue samples was obtained from all patients, and the study was approved by the Kobe University Institutional Review Board. We analyzed the histological and clinicopathological information using the Japanese Classification of Esophageal Cancer proposed by the Japan Esophageal Society and the TNM classification of the Union for International Cancer Control.

Total RNA was extracted from cultured cells using the RNeasy Mini Kit (Qiagen, Hilden, Germany). RT-PCR amplifications of CXCL8, CXCR1, CXCR2 and the internal control gene GAPDH were performed. PCR products were subjected to electrophoresis in a 2% agarose gel. The qRT-PCR amplifications of CXCL8 and the internal control gene GAPDH were performed using the ABI StepOne Real-time PCR system (Applied Biosystems, Foster City, CA). The threshold cycle (Ct) values were determined by plotting the observed fluorescence against the cycle number. Ct values were analyzed using the comparative threshold cycle method and normalized to those of GAPDH.

PBMos (1.0 × 105 cells/well) were seeded on the lower chamber in 24-well plates with M-CSF (25 ng/ml; R&D Systems) for 6 days to induce macrophages, and then incubated with 50% TECMs to induce TAM-like macrophages. After 2 days, the media were replaced with serum-free media. TE cells (5.0 × 105 cells/well) in serum-free media plated on the upper transwell inserts. Transwell migration and invasion assays were performed as described above.

PBMo-derived macrophages, TAM-like macrophages and ESCC cell lines were cultured in 24-well plates (1 × 105 cells/well) with RPMI-1640 10% FBS and 1% antibiotic-antimycotic. After 48 h, the CXCL8 levels in the cell culture supernatants were determined by the Quantikine ELISA Human IL-8 immunoassay (R&D Systems) according to the manufacturer’s instructions. The optical density of each well was determined by the Infinite 200 PRO microplate reader at 492 nm. The CXCL8 concentration of each sample was calculated using a standard curve and the measured absorbance.

All experiments were performed in triplicate and independently conducted three times. The results are expressed as mean ± SEM, and statistical significance was analyzed by two-sided Student’s t-test or one-way ANOVA. The relationships between clinicopathological factors and immunohistochemical results were estimated by χ2 test. Disease-free and overall survival curves were estimated by the Kaplan-Meier method compared by log-rank test. The significance of parameters in a multivariate analysis was tested using the Cox proportional hazard regression model. A p-value < 0.05 was considered significant. Statistical analyses were carried out using SPSS Statistics ver. 22 (IBM, Chicago, IL).

MH, YK, NT, NH, HK and KS conceived and performed the experiments. MH, YK and HY analyzed the data and wrote the manuscript. NU, MN and MS prepared the tissue samples and performed the histological classification.

This work was supported by Grants-in-Aid for Scientific Research (C-26460418) and (JP17K08693) and for Young Scientists (JP16K21159) from the Japan Society for the Promotion of Science. We thank Atsuko Kawashima, Yumi Hashimoto, Nobuo Kubo, Miki Yamazaki and Shuichi Matsumoto for their excellent technical assistance.