Preoperative identification of individuals at low risk of lymph node metastasis is key to the proper management of endometrial cancer. This study evaluated the role of preoperative assessment based on magnetic resonance imaging (MRI) and histological analysis in identifying a group having a low risk of lymph node metastasis. Data of 529 patients with endometrial cancer were obtained from a prospective multicenter database, between January 2012 and December 2014. Clinical staging, based on MRI and histological analysis, was compared with final pathology results after the surgical staging procedure. The preoperative low-risk criteria, based on current guidelines from Korea, France, and Canada, and criteria used for fertility-sparing therapies, were applied to our multicenter cohort and the accuracy of each set of criteria for identifying group at low risk of lymph node metastasis was evaluated. When considering grades or MR stages separately, the overall agreement between preoperative and postoperative findings was poor (Kappa 0.45 for grades; 0.41 for stages). However, when combining these two parameters, the low-risk group, as defined by any of the guidelines, had an acceptable rate of lymph node metastasis (below 3%). The French guidelines identified 249 patients (47.1%) as being in the low-risk group. Criteria used to define fertility-sparing therapy candidates identified 48 patients (9.1%) among the study population, only one of whom had extra-uterine disease. This study shows that the current guidelines, using preoperative assessment based on MRI and histological analysis, can identify low-risk patients, who may be candidates for omitting lymphadenectomy.

In 1988, the International Federation of Obstetrics and Gynecology (FIGO) recommended surgical staging for endometrial cancer patients [1]. Although two randomized controlled studies failed to show a survival benefit for performing lymphadenectomy over not performing this procedure, the value of lymphadenectomy for the treatment of endometrial cancer remains controversial [2, 3]. The current guidelines recommend that lymphadenectomy should be performed for selected patients, but the need for lymphadenectomy could be avoided in a low-risk group [4–8]. Therefore, preoperative and intraoperative assessment is key to the proper surgical management of this disease subset.

Recently, the Korean Gynecologic Oncology Group (KGOG) proposed a preoperative prediction model for lymph node metastasis, using serum CA-125 levels and MRI parameters [9]. In addition, the accuracy and reliability of this model for identifying a low-risk group has been confirmed in a prospective cohort [10]. However, approximately 60% of KGOG members prefer to use routine lymphadenectomy, even in patients satisfying the KGOG-2015 low-risk criteria [11], and some decide on lymphadenectomy based on preoperative imaging and the grade of the tumor, as determined through biopsies, prior to surgery.

Each guideline proposes specific criteria for the low-risk group, based on various combinations of preoperative histology and MRI parameters. In addition, decisions about fertility-sparing therapies are solely dependent on clinical staging, based on preoperative assessment [4, 12]. However, the actual risk of extra-uterine disease in patients that satisfy the above-mentioned criteria has not yet been determined in diverse clinical settings.

The aim of this study was to evaluate the rate of upgrading and upstaging between preoperative assessment and final surgical pathology in a multicenter prospective cohort of patients with endometrial cancer who had undergone surgical staging (KGOG-2015) [10]. In addition, we evaluated the performance of preoperative assessment based on current guidelines and fertility-sparing therapies for identifying a group at low risk of endometrial cancer.

Comparison of clinical and surgical staging

The performance of the KSGO, SOGC, INCa low-risk criteria, and fertility-sparing therapies was assessed by applying them to all 529 patients (Table 3).

*For the diagnosis of lymph node metastasis.

We used a Venn diagram to show the low-risk group for lymph node metastasis and how they satisfied the various guidelines (Figure 1). In our cohort, candidate fertility-sparing therapies were the most conservative for identifying a group at low risk for lymph node metastasis, and patients designated as being at low risk, based on fertility-sparing therapy criteria, also completely satisfied KSGO criteria. By using SOGC and INCa guidelines, we would have identified more low-risk group patients than by using the KSGO guidelines, without a significant increase in the false-negative rate. 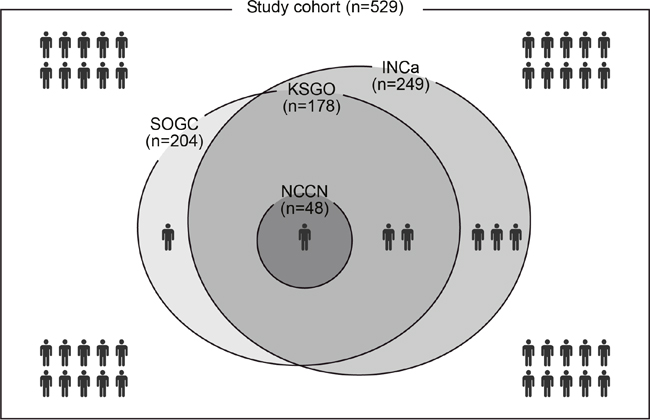 Figure 1: Venn diagram for distribution of low-risk group according to various criteria. The area of circle is proportional to the number of low risk group per criteria. Lymph node metastasis is described by patient icon.

In this study, we evaluated the role of preoperative assessment based on MRI and histological analysis in identifying a group at low-risk of endometrial cancer. When the grades or MR stages are considered separately, the overall agreement between preoperative and postoperative findings was poor. However, a combined analysis of preoperative parameters is highly sensitive in predicting extra-uterine disease, in particular lymph node metastasis, and may result in the accurate identification of patients with endometrial cancer who are at low risk for lymph node metastasis.

The first objective of this study was to correlate the grade and stage based on preoperative assessment with that of the final pathology. Our study results correlated with those of previous studies [13–15]. Body et al. showed that preoperative assessment had a 90% negative-predictive value for the diagnosis of grade 3 tumors [15]. Batista et al. suggested that preoperative endometrial sampling was found to be a modest overall predictor of postoperative histological grading [14]. They showed that 15.2% of patients with preoperative grade 1 diagnosis were upgraded after hysterectomy. Baek et al. found extensive upgrading (16.2%), based on the final pathology report from hysterectomy specimens in cases of preoperative grade 1 disease [13]. In line with previous reports, the overall level of agreement between preoperative and postoperative grading was also disappointing. We showed that upgrading occurred in 19.7% of patients with preoperative grade 1 disease. In addition, previous studies have demonstrated the diagnostic performance of MRI for evaluating myometrial invasion and lymph node metastasis [15–17]. Some studies have specifically evaluated the performance of MRI for FIGO staging and have shown an underestimation rate of approximately 20% [15]. This finding is similar to that of our study; thus, preoperative evaluation based on MRI is incomplete.

We showed that the low-risk group as defined by any of the guidelines had an acceptable rate of lymph node metastasis, and a high negative-predictive value. This suggests that the decision to omit lymphadenectomy based on any of the guidelines could be justified. A previous study has shown treatment preferences for no lymphadenectomy over routine lymphadenectomy in early-stage endometrial cancer [18]. They showed that the majority of patients would accept a small amount of recurrence risk (within 3%) to reduce the incidence of lymphedema from routine lymphadenectomy. Under a selective lymphadenectomy strategy, patients who were unstaged based on false-negative results from low-risk group are likely to have a higher recurrence risk due to unidentified metastatic disease. In our study, the false-negative rate from models did not exceed 3%.

In our cohort, fertility-sparing therapies identified the low-risk group very conservatively, while the Canadian and French guidelines identified more candidates for such therapies, omitting lymphadenectomy, with a low likelihood of lymph node metastasis. Our study demonstrates that the current guidelines may be considered safe for practice.

In conclusion, the criteria used in the current guidelines can identify a group with a low risk of lymph node metastasis. This study has useful implications for physicians counseling patients who desire to avoid lymphadenectomy. Our findings suggest that the vast majority of women could safely avoid lymphadenectomy, with its potential increased lymphedema risk.

From January 2012 to December 2014, 537 patients with endometrial cancer were enrolled into a prospective, multicenter cohort study (KGOG-2015), involving 20 hospitals in three countries, i.e., Korea, Japan, and China [10]. All participating patients had biopsy-confirmed endometrial cancer and underwent preoperative MRI and CA-125 before surgery. Comprehensive surgical staging, including systematic lymphadenectomy, was performed for all patients in this study. Patients were staged on the basis of final pathological findings according to the 2009 FIGO classification. Nine patients were excluded due to inadequate imaging study (n = 1), no lymph node dissection (n = 4), and proven sarcoma (n = 3). All patients underwent MRI of the pelvis at either 1.5T or 3T scanners with a phased-array body coil. MR sequences of each institution varied because of our retrospective study design, but the common sequences in all institutions were precontrast T2-weighted images, precontrast T1-weighted images (T1W1), post-contrast T1W1 after a standard dose of gadolinium administration, and diffusion weighted image. There were no sequences with slice thickness larger than 7.5mm.

Definition of a low-risk group

The results of the preoperative assessment were compared with the final pathological analysis of the surgical specimen. In terms of tumor grade, the agreement levels between the preoperative and postoperative pathological findings were analyzed using Kappa statistics with 95% confidence intervals. Descriptive analysis was performed to evaluate the rate of upstaging during surgical staging, as compared to preoperative MRI staging. In addition, we evaluated the performance of preoperative low-risk criteria, including those of the KSGO, SOGC, INCa, and fertility-sparing therapies. The area under the curve (AUC) was calculated for predicting lymph node metastasis. Analysis was performed using STATA 12.0 (StatCorp, College Station, TX, USA). P < 0.05 was considered to be statistically significant and all P-values were two-sided. Patients with missing or unclear data for calculating the probability of lymph node metastasis were excluded when evaluating each criterion. No imputation method was applied.

Writing, review, and/or revision of the manuscript: JYL, YHK, JML

We thank all participating patients for their efforts. We extend our thanks to the KGOG members who participated in KGOG-2015. This study was partly supported by the Basic Science Research Program through the National Research Foundation of Korea (NRF) funded by the Ministry of Education (2016R1D1A1B03931916).

No potential conflicts of interest exist.