Lung cancer is a malignant tumor with high morbidity and mortality. Lung cancer as the leading cause of cancer-related deaths caused occurred in 1.8 million people and resulted in 1.6 million deaths worldwide in 2012 [1]. It was reported that lung cancer is the highest incidence of malignant tumors in China with the annual new cases about 705,000 [2]. The cigarette smoking, environmental pollution, radon exposure, occupational exposure, and pre-existing lung disease were found to be important contributors to lung cancer risk [3, 4]. However, not all people with these risk factors develop lung cancer. About 8% of lung cancer is due to inherited factors [5]. Previous studies have identified multiple susceptibility polymorphisms in some genes that are associated with the risk of lung cancer, such as TERT [6, 7], TP63 [8] CLPTM1L [9, 10], PSMA4 [11], CHRNA3 [12], CHRNA5 [13], CRP and GPC5 [14], and so on.

Telomeres are special functional structure at the end of chromosomes and they have been deemed as a crucial role in maintaining the stability and integrity of the genome [15]. Telomere dysfunction could lead to chromosomal instability and the increase of carcinoma susceptibility so that the cells would get growth advantages, even develop into tumor cells [16, 17]. The TERT (telomerase reverse transcriptase) gene, encoding the catalytic subunit of the telomerase, is primarily regulated at the level of transcriptional initiation. The TERC (telomerase RNA component) gene, encoding the subunit of the enzyme, provides the template for the synthesis of the TTAGGG repeats. The two major telomerase genes are maintained telomere DNA length, chromosomal stability, and cellular immortality.

A number of studies have reported that single nucleotide polymorphisms (SNPs) of TERT and TERC gene are associated with a significantly higher susceptibility to multiple types of cancers [6, 17-20]. But few studies were reported on the association between SNPs in TERC gene and the risk of lung cancer. In the study, we conducted a case-control study consisting of 554 lung cancer patients and 603 healthy controls to investigate whether SNPs in TERT and TERC are associated with lung cancer risk in the Chinese Han population, and further to verify whether the conclusion we drew was in accord with the former studies.

In our study, the basic characteristics were shown in the Table 1. There were 416 males and 138 females in the case group with a mean age of 58.18±10.534, 496 males and 134 females in the control group with a mean age of 48.24±13.053. There was a statistical difference in age between two groups and no significant difference in gender. We adjusted gender and age in later multivariate unconditional logistic regression analysis in order to eliminate those residual confounding effects.

Table 1: Basic characteristics of the cases and controls

Table 2: Association between the SNPs of TERC and TERT and the risk of lung cancer

Table 3: Genetic model analyses of the association between the SNPs and lung cancer risk 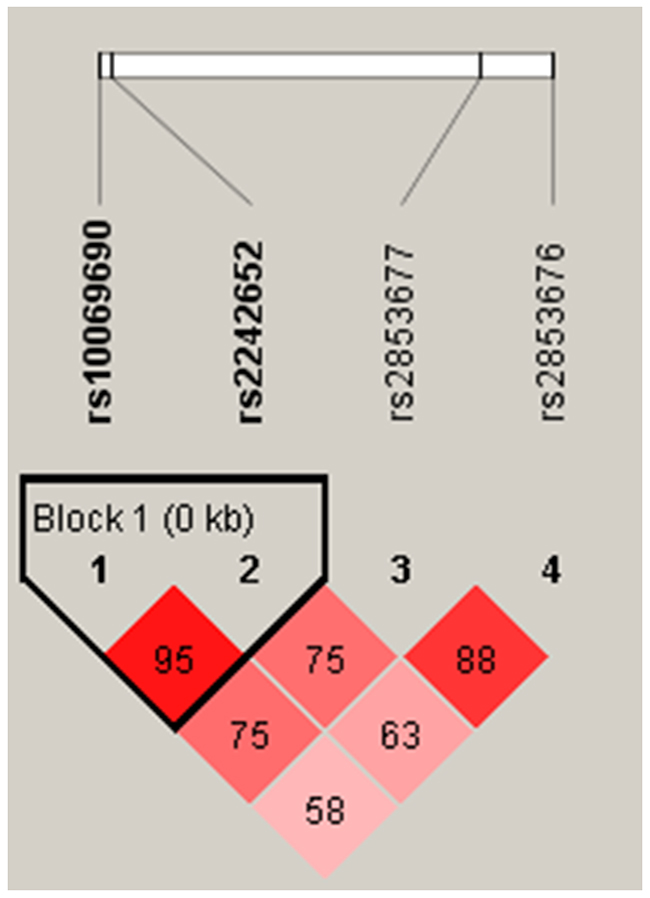 Table 4: Haplotype frequency and their association with lung cancer risk

bP value was calculated by logistic regression analysis adjusted by gender and age.

In the case-control study, we investigated the association between SNPs in TERC, TERT genes and the risk of lung cancer in Chinese Han population. The results showed that rs10936599 in TERC and rs10069690, rs2242652 and rs2853677 in TERT were revealed as risk factors of lung cancer. Besides, the haplotype “TA” of TERT gene was also associated with an increased risk of lung cancer.

Telomeres at the ends of chromosomes play a significant role in maintaining the stability and integrity of the genome [15]. During somatic cell divisions, telomeres progressively shorten. While the telomeres turn into a critical threshold, they may lead to cell senescence or apoptosis [21]. Previous studies reported that telomere length was associated with lung cancer risks, but the conclusions were inconsistent [22-24]. TERT gene at 5p15.33 encodes the catalytic subunit of telomerase reverse transcriptase, which is an important component of telomerase complex and associated with telomere length. TERC gene located at human chromosome 3q26.2 region, which encodes the RNA component of human telomerase. TERC serving as a template for telomere elongation can affect telomere homeostasis.

Previous studies indicated that the allele of rs2853677 in TERT, disrupted the Snail1 binding site, causing derepression of TERT transcription in response to Snail1 upregulation, was associated with a high risk of lung adenocarcinoma [17, 30, 31]. We found rs2853677 was also associated with an increased lung cancer risk. A meta-analysis study showed that rs2853676 (TERT) was associated with an increased risk of lung adenocarcinoma in Caucasians population [32]. However, in our study, no association was found between rs2853676 and lung cancer risk in the Chinese Han population. The difference in sample size and races may be the result of inconsistencies in the findings.

Finally, there are some potential limitations. First, smoking and other risk factors was not included due to lack of corresponding clinical information. Second, the associations between SNPs and telomere length, telomere length and lung cancer risk were not performed in our study. Moreover, the biological function of each SNP was not explored and these deserved further study.

In conclusion, the study demonstrated that rs10936599 (TERC), rs10069690, rs2242652 and rs2853677 in TERT, and haplotype “TA” of TERT are associated with increased risk of lung cancer in Chinese Han population. Our study not only indicated a new SNP (rs10936599) in TERC which as a risk factor of lung cancer, but supplemented and verified the findings reported before, thus there could be more powerful evidences and they can be used as diagnostic and prognostic markers in clinical studies of lung cancer patients.

A total of 554 patients with lung cancer and 603 healthy controls were recruited in our study. All the patients were treated in the First Affiliated Hospital of Xi’an Jiaotong University between January 2014 and August 2016. All demographic and related clinical data including age, gender were collected through a review of medical records. Inclusion criteria included patients who recently diagnosed with primary lung cancer (confirmed by histopathological examination) and patients who had not yet received any chemotherapy or radiotherapy. Patients with other types of cancers were excluded. The healthy controls were randomly recruited from unrelated subjects living Xi’an and nearby. Moreover, people with chronic disease involving brain, liver, and heart were excluded from our study.

We obtained the informed consent from all of the participants and the study protocols were approved by the Ethics Committee of First Affiliated Hospital of Xi’an Jiaotong University and in accordance with the ethical guidelines of the Declaration of Helsinki.

We collected 5mL peripheral blood venous in an EDTA tube from each subject. Genomic DNA was extracted from whole blood samples using the Gold Mag-Mini Whole Blood Genomic DNA Purification Kit according to the manufacturers’ instructions (GoldMag. Co. Ltd., Xi’an, China). The DNA concentration and purity were measured by NanoDrop 2000 spectrophotometer (Thermo Fisher Scientific, Waltham, MA, USA). We reviewed the literatures related to association between TERT and TERC polymorphisms and lung cancer and other cancers then selected five SNPs in TERC (rs10936599) and TERT (rs10069690, rs2242652, rs2853677 and rs2853676) with the minor allele frequencies (MAF) ≥5% in the Chinese Han Beijing (CHB) population by using HapMap database [6, 31-33]. The sequences of primers for amplification and extension were designed by the Sequenom MassARRAY Assay Design 3.0 software (Sequenom, Inc, San Diego, CA, USA), as shown in Table 5. Genotyping was performed using a Sequenom MassARRAY platform (Sequenom, San Diego, CA, USA) in accordance with the manufacturer’s protocol. Sequenom Typer 4.0 software was used to perform data management and analyses.

Table 5: The sequences of primers for SNPs

Sequences are written in the 5’→3’ (left to right) orientation.

The SPSS version 20.0 statistical package (SPSS, Chicago, IL, USA) and Microsoft Excel were used for all statistical analyses. We performed Chi-squared/ exact test to compare the expected frequencies of the genotypes in the controls in order to assess the Hardy-Weinberg equilibrium (HWE) of each SNP. All of the minor alleles were deemed as risk alleles for lung cancer susceptibility. The differences in frequency distributions of alleles were compared between cases and controls by Chi-squared test. We performed five genetic models analyses (codominant, dominant, recessive, overdominant and log-additive) to evaluate associations between the SNPs and risk of lung cancer. The odds ratios (ORs) and 95% confidence intervals (CIs) were used for crude logistic regression analysis and logistic regression analysis adjusted by gender and age. We used the Haploview software package (version 4.2) to analyze the linkage disequilibrium (LD) and haplotypes. For LD analysis and haplotype construction, genotype data of control groups were used to estimate the degree of LD by measures D’, and the D’ value > 0.8 demonstrated the related SNPs formed one haplotype block. The P-value < 0.05 was considered statistically significant. Besides, The P-value < 0.002(0.05/(5*5)) indicates statistical significance after Bonferroni correction. All statistical tests were two-sided.

The authors are also grateful to the patients and control individuals for their participation in the study. We thank the clinicians and hospital staff who contributed to sample and data collection for this study.