Conclusion: VEGFA rs833061 polymorphism is significantly associated with the therapeutic efficiency of bevacizumab in CRC patients.

Colorectal cancer (CRC) is one of the most common malignancies, which is caused by the abnormal growth of cells in colon or rectum part. The tumor cell could spread elsewhere in the body. Recent years, with the development of therapy method, the mortality rate of CRC exhibits decreased trend [1]. CRC is caused by various genetic and environmental factors [2–5]. In the tumor growth and metastasis, angiogenesis is an essential factor [6]. Vascular endothelial growth factor (VEGF), a super family of growth factors, is involved in both vasculogenesis and angiogenesis [7, 8]. It has been reported that the inhibition of angiogenesis will contribute to anti-tumor treatments [9, 10]. Recent decades, many angiogenesis inhibitors have been applied for cancer therapy. Bevacizumab (BEV) is a humanized monoclonal antibody which could suppress the angiogenesis by inhibiting VEGF binding to the VEGF receptors (VEGFR). Therefore, BEV regulates the angiogenesis via the inhibition of signal transduction. BEV has been used in the treatment of metastatic CRC. However, there was few clinical or biological factors to predict the therapeutic efficiency of BEV.

VEGFA is an important regulator of angiogensis in VEGF family, represents the main target of BEV. VEGFA plays a potential role in the development and treatment of CRC. Previous studies showed that polymorphisms of the VEGFA gene influenced the expression or the function of its coded protein [11–13]. Therefore, the polymorphisms may have impact on the onset and progression of tumors [14, 15]. It has been reported that single nucleotide polymorphisms (SNPs) of VEGFA gene could affect the tumor susceptibility, severity, and/or survival [16–18].

A total of 125 (mean age 62.50±8.45 years) CRC patients receiving BEV combined FOLFIRI treatment were collected in this study Baseline characteristics of the participants were summarized in Table 1.

In the current study, PCR-RFLP was performed to identify the genotype of VEGFA rs699947 and rs833061 polymorphisms. In addition, the results of 50 random samples were verified by direct sequencing. The genotype confirmed by PCR-RFLP and direct sequencing technology exhibited similar, suggesting the high accuracy of PCR-RFLP method in genotyping.

Note: a: significant level was adjusted by Bonferroni method, α=0.017. 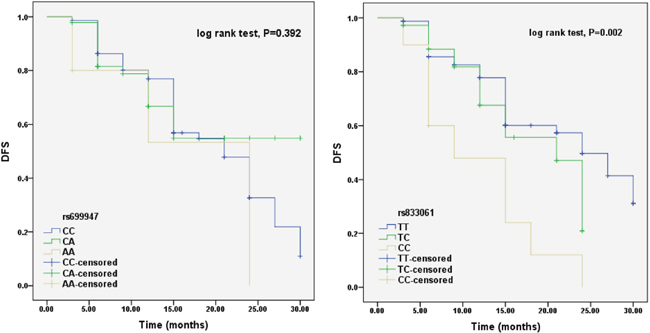 Accumulation of VEGF plays promoting roles in the development of tumors via enhancing angiogenesis. Among the VEGF family, VEGFA has the strongest activity to promote the angiogenesis. BEV is aimed at VEGF, weakens or blocks the interaction between VEGF and VEGFR, thus inhibits the proliferation of endothelial cell, reduces the angiogenesis in tumorigenesis. Inhibition of angiogenesis could prevent the growth of tumors and increase the therapeutic efficacy of radiotherapy and chemotherapy [23]. As one of the most common malignancy in large intestine, CRC has a high incidence and mortality. Recent years, relevant researches showed that therapeutic efficacy of BEV monotherapy is very low [24], but the combination of chemotherapy and BEV significantly improve the therapeutic efficacy of advanced CRC [25]. However, the therapy response is different in the participants who receive the same therapy method. Additionally, the toxic and adverse effects are also different in the patients. These phenomena may be decided by the individual difference.

VEGFA, one of the target gene of BEV, is located at 6p12, and contains 9 exons. It has been reported that polymorphisms in VEGFA gene play a potential role in the development of many tumors, including CRC [14, 15, 26]. Polymorphisms in this gene may impact the therapeutic efficiency of BEV. Ferroni et al demonstrated that -1154AA genotype was negatively correlated with efficacy and toxicity of bevacizumab in metastatic cancer patients [18]. Di and colleagues suggested that rs2010963 genotype was correlated with longer PFS in recurrent glioblastomas patients for the response to bevacizumab [20]. Rs699947 (c.-2578A>C) and rs833061 (c.-1498C>T) are the two widely researched SNPs in the promoter region of VEGFA gene. Previous studies showed that these polymorphisms could affect the promoter activity of the VEGFA gene, and then alter the production of VEGFA [12, 13]. As a target of BEV treatment, abnormal accumulation of VAGFA might contribute to angiogenesis, thus leading to therapeutic failures. It was reported that high level of VEGFA predicted shorter recurrence-free survival among patients receiving bevacizumab-based chemotherapy [27]. Thus, polymorphisms at promoter region of VAGFA gene may significantly influence the therapeutic efficacy of BEV chemotherapy. Because the BEV monotherapy has low therapeutic efficacy, we used the combination chemotherapy to explore the effects of VEGFA polymorphisms in the BEV therapeutic efficacy for CRC.

Growing evidences have suggested that BEV could significantly enhance the PFS of CRC patients who are treated with combination chemotherapy [25]. However, the therapeutic efficacy of BEV may exhibit individual differences. Genetic factors play pivotal roles in individual differences. To explore the association between SNPs and BEV treatments can help the physicians to identify the population who will benefit from BEV combined chemotherapy among advanced CRC patients, thus optimizing the management of BEV. In this study, we explored the association of VEGFA polymorphisms with therapeutic efficacy of BEV in CRC patients. The results were estimated by ORR, DCR, and PFS. Analysis results indicated that rs699947 polymorphism did not show significant association with BEV treatment in CRC patients. Additionally, we found that the genotypes of the rs833061 SNP were significantly correlated with ORR, DCR and PFS among the study population. Multivariate analysis indicated that TC carriers had a higher ORR, while TT carriers underwent well DCR. Furthermore, both of TC and TT carriers had a significantly better PFS than CC carriers. That was partly accordance with previous studies. Pallaud et al. found that among non-squamous non-small-cell lung cancer patients receiving BEV plus chemotherapy, TT carriers of rs833061 had the highest response rate [28]. Loupakis et al. suggested that rs699947 variant could not impact the PFS and OS in CRC patients in Caucasian population [29]. Schneider et al. suggested that rs833061 TT might decrease the hypertension toxicity of BEV [30]. VEGF -2578CC and -1498TT genotypes decreased the hypertension toxicity of BEV in Japanese CRC patients [31], but these two SNPs had no association with the outcome of CRC patients treated with BEV-based chemotherapy [32]. However, other studies were different from our results. For instance, Loupakis et al. revealed that rs833061 TT genotype associated with shorter PFS in Italian CRC patients who received first-line FOLFIRI plus BEV treatment [29]. The divergence may be caused by the diversity of regions, races, select criteria or the categories of disease.

In conclusion, VEGFA rs833061 polymorphism is obviously associated with the therapeutic efficiency of BEV in Chinese Han CRC patients. This result will help us to select the patients who exert high response to BEV treatment, thus improving the clinical outcomes of CRC patients. However, our results may be limited by the relatively small sample size and the single ethnicity in the current study. Additionally, the concrete molecular mechanisms underlying the genetic association of VEGFA rs833061 polymorphism with BEV treatment are not investigated in the current study. Further investigations will be required to verify the conclusion.

This study was approved by the local ethics committee. All of the participants were unrelated Chinese Han people. They understood the objectives of the study and signed the informed consents. The sample collection was in accordance with the Helsinki declaration.

Study subjects were selected from CRC patients who were hospitalized in The Military General Hospital of Beijing PLA from January 2010 to January 2013. Patients were diagnosed with CRC by computed tomography (CT) and histopathologic examinations based on the diagnosis standards of CRC [33]. Include criteria were as follows: CRC patients who had metastasis or postoperative recurrence were included in this study. Patients had the following conditions were excluded from this study: expectancy life was less than 3 months; received anti-angiogenic therapy before this study; and had any other cardiovascular or cerebrovascular diseases. Patients who had the adjuvant treatment less than 6 cycles were also excluded from this study. Finally, 125 patients (age range 31-80 years) were recruited in this study.

Treatment response was evaluated by experienced oncologists according to RECIST 1.1 after three months treatment [34]. Treatment response included complete response (CR), partial response (PR), stable disease (SD) and progressive disease (PD). The short therapeutic efficiency was estimated by object response rate (ORR) and disease control rate (DCR). The rate of CR+PR is defined as ORR. DCR is defined as the rate of CR+PR+SD. The long effects of VEGFA variants on BEV treatments were evaluated by progression-free survival (PFS). PFS is the duration from the beginning of the treatment to the first observation of disease progression or the last follow-up visit. Follow up time was 30 months. Patients were diagnosed by CT scan every 3 months.

5 ml peripheral venous blood was collected form each participant who had a 12h fasting before the adjuvant treatment. Blood samples were anti-coagulated by EDTA, and stored at -80°C until used. Genomic DNA was extracted by a TIANamp Blood DNA Kit (Tiangen, China), following the manufacturer’s protocol.

All of the statistic analyses were conducted by PASW 18.0 software. Significant level was set to two side 0.05 and adjusted by Bonferroni method in multiple comparison. Genotype and allele distributions were detected by Hardy-Weinberg equilibrium (HWE) test. Genotype and allele frequencies were obtained by direct counting. Quantitative variables were shown as mean± standard deviation. Qualitative variables were analyzed by Chi-square test. CR, PR, SD and PD were used to present the responses for bevacizumab treatment. Kaplan-Meier survival curve was utilized to analyze the PFS of the patients after bevacizumab therapy. Time-to-event distributions were analyzed by log-rank test, and the results were adjusted using Bonferroni method. Multivariate logistic regression analysis and multivariate cox regression analysis were performed to estimate the association of VEGF polymorphisms on bevacizumab efficiency after adjusting to the other confusing factors.