Blastic plasmacytoid dendritic cell neoplasm (BPDCN) is a rare haematopoietic malignancy characterized by dismal prognosis and overall poor therapeutic response. Since the biology of BPDCN is barely understood, our study aims to shed light on the genetic make-up of these highly malignant tumors. Using targeted high-coverage massive parallel sequencing, we investigated 50 common cancer genes in 33 BPDCN samples. We detected point mutations in NRAS (27.3% of cases), ATM (21.2%), MET, KRAS, IDH2, KIT (9.1% each), APC and RB1 (6.1% each), as well as in VHL, BRAF, MLH1, TP53 and RET (3% each). Moreover, NRAS, KRAS and ATM mutations were found to be mutually exclusive and we observed recurrent mutations in NRAS, IDH2, APC and ATM. CDKN2A deletions were detected in 27.3% of the cases followed by deletions of RB1 (9.1%), PTEN and TP53 (3% each). The mutual exclusive distribution of some mutations may point to different subgroups of BPDCN whose biological significance remains to be explored.

Blastic plasmacytoid dendritic cell neoplasm (BPDCN) is an orphan disease with a very aggressive clinical course resulting in median survival times of 12-14 months [1,2]. The male-to-female sex ratio is approximately 2.0-3.5:1 and the mean age at diagnosis is 65-70 years. There is no standardized therapeutic approach [3] and despite initial response to chemotherapy, patients show a very high relapse rate, which points to an overall low efficacy of current therapeutic regimens [4-8].

Initially named blastic NK/T cell lymphoma or agranular CD4+/CD56+ hematodermic neoplasm/tumour [6, 9, 10, 11], BPDCN is –according to the current WHO classification- classified as an acute myeloid leukemia-related precursor neoplasm [12] that has been shown to derive from precursors of plasmacytoid dendritic cells [13, 14,15, 16]. The genetic basis of this malignancy, however, whose comprehension may yield new and more efficient therapeutic strategies, remains largely enigmatic [17]. As with other rare diseases, the low prevalence of BPDCN and its only quite recent recognition as a distinct tumour entity are major obstacles for comprehensive and systematic clinical and biological research efforts. Consequently, until now only few studies with limited numbers of cases have focused on the genetic foundations of BPDCN, mainly investigating copy number variations of tumor suppressor genes including TP53 and RB1 [18, 19, 20, 21]. Two more recent studies [18, 22] also addressed somatic point mutations in the genome of BPDCN. To complement previous efforts and to gain more insight into the genetic basis of BPDCN, we performed targeted ultra-deep semiconductor-based massive parallel sequencing of 50 cancer-related genes [23] in 33 formalin-fixed, paraffin embedded primary BPDCN samples and additionally assayed CDKN2A copy numbers.

Thirty-three cases of BPDCN were analyzed for somatic mutations of 50 common cancer genes by ultra-deep targeted semiconductor-based massive parallel sequencing. A detailed overview of detected SNPs including allele frequencies is given in supplementary table 1. Patient demographics are described in table 1. Twenty-seven patients (81.8%) were male and the median age was 72 years. Except for one case with manifestation in the nasopharynx, all biopsy specimens were obtained from cutaneous infiltrates.

Mutations in either RAS genes or ATM were present in 57.6% of cases and in a mutually exclusive distribution (figure 1). Notably, 16 (48.5%) cases displayed somatic alterations in two or more genes.

Figure 3 depicts the type of point mutation and resulting amino acid substitution for all BPDCN specimens showing recurrent mutations in NRAS, IDH2, APC and ATM. Except for a nonsense mutation in RB1, mutations in the other genes were of missense type. 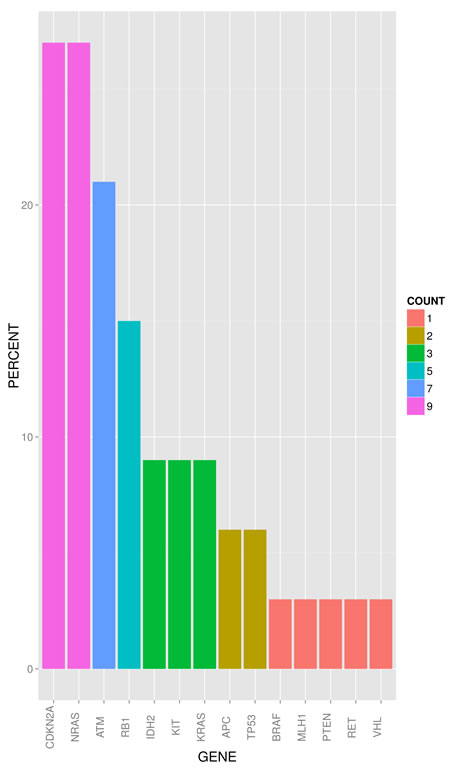 Interestingly, as depicted in figures 1 and 3, one case showed concomitant deletion of one TP53 allele and a double mutation in the remaining TP53 allele and we also found two exceedingly rare mutations in KRAS (p.Gln22Lys and p.Leu23Arg), which have been documented in Cosmic but not reported in the literature yet. 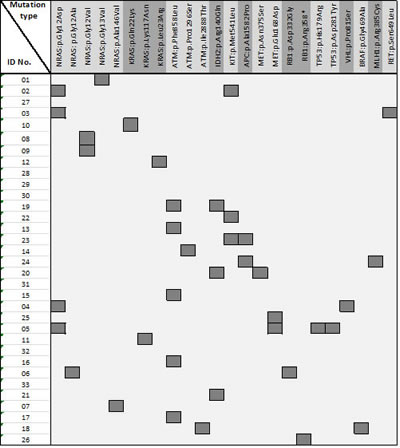 As expected, all mutations in genes coding for the MAPK cascade i.e. KRAS, NRAS genes and BRAF as well as point mutations in the tumor suppressor genes APC, VHL, RB1 and TP53 were classified as deleterious/damaging by four independent in silico tools (table 2). While mutations in MET and KIT as two potential drug targets were predicted as neutral, we found deleterious missense mutations in ATM and RET, both encoding proteins of the DNA damage response.

Table 2: In silico characterization of gene mutations including COSMIC annotations

Here, we performed targeted high-coverage massive parallel sequencing of 50 common cancer genes in 33 cases of BPDCN. We found recurrent mutations in 4 cancer genes and delineated that NRAS, KRAS and ATM mutations are distributed in a mutually exclusive fashion.

BPDCN is a rare and aggressive hematologic malignancy, whose pathobiology is still largely obscure. Over the last 5 years studies on the genetic foundations of BPDCN revealed a peculiar genotype with a complex karyotype and recurrent deletions in several tumor suppressor genes, such as RB1, TP53, CDKN2A and CDKN2B [19, 20, 21, 28]. While the data on copy number variations seem to be rather specific for BPDCN among hematologic neoplasms, recent work [18, 29] demonstrated point mutations in TET2 und TP53 in the genome of BPDCN thereby genetically relating BPDCN to a broad range of myeloid malignancies, where recurrent mutations particularly in the tumour suppressor TET2 but also in TP53 are highly prevalent [30, 31]. In accord with these reports, we detected deletions, which were most prevalent for CDKN2A and less frequent for RB1, TP53 and PTEN. Moreover we found point mutations in TP53, IDH2, KRAS and NRAS further underpinning a genetic relation between BPDCN and myeloid malignancies, including acute myeloid leukemia and myelodysplastic syndrome. Thereby, our findings extend the observations of prior studies and support the genetic rationale for the current WHO classification of BPDCN as a distinct precursor neoplasm that relates to acute myeloid leukemia. In this context it is notable that we did not find mutations in other genes that have been described in myeloid malignancies, such as FLT3, NPM1, IDH1, JAK2, and EZH2. A very recent study by Menezes et al [22], who used a combined approach of whole exome sequencing-based identification of major genetic aberrations and targeted resequencing of 25 BPDCN, found similar frequencies of mutations in NRAS and corroborated TET2 mutations albeit at a lower frequency as reported previously [18, 29]. Additionally, they identified mutations in genes not included in our gene panel, namely in ASXL1 and in the transcription factors IKZF1-3 and ZEB2. Taken together, these findings strongly support the view that BPDCN is a distinct entity within the spectrum of myeloid malignancies.

Interestingly, we discovered missense mutations in DNA damage response genes, i.e. MLH1 and ATM in a substantial number of cases. Of three ATM variants, we have detected in our cohort, two are already reported in the Cosmic database and all three are classified as damaging by the majority of the in silico prediction models used herein. ATM aberrations have been mainly implicated in the development of lymphomas, including T-cell prolymphocytic leukemia [32], mantle cell lymphoma [33], diffuse large B-cell lymphoma [34] and B-cell chronic lymphocytic leukemia [35]. Although we do not know yet what these ATM mutations actually mean for BPDCN biology, In the light of the above mentioned studies, our genetic data may point to a shared trait with lymphoid malignancies. In line with these findings, BPDCN express also molecules that can be found in malignant lymphomas, such as CD4 and CD123 and it has been demonstrated in mice that normal plasmacytoid dendritic cells retain remarkable differentiation plasticity and can derive from both myeloid and lymphoid progenitors [36]. Also, a recent study conducted by Sapienza et al [37] found BPDCN to display an ambiguous expression profile that indeed related to both acute lymphoid and acute myeloid leukemia. Moreover, although these data do not stem from randomized clinical trials and therefore have to be interpreted carefully, several clinical reports have demonstrated a considerable efficacy of acute lymphoid leukemia-like protocols in BPDCN treatment [38, 39].

While it is well known that RAS signaling plays a role in other hematologic malignancies, our study shows for the first time that BPDCN specimens have mutually exclusive mutations in NRAS and KRAS and recurrent mutations in NRAS. Our study suggests that the prevalence of RAS mutations in approximately 35% of BPDCN even exceeds the ones reported for other hematological neoplasms known to harbor RAS-mutations, namely juvenile myelomonocytic leukemia (JMML), chronic myelomonocytic leukemia (CMML), acute myeloid leukemia (AML), myelodysplastic syndrome (MDS), acute lymphoblastic leukemia (ALL) and multiple myeloma (MM) [40]. As already reported for these neoplasms, BPDCN also shows a clear predominance of NRAS mutations over KRAS mutations. Although tremendous research efforts are being made, powerful and clinically effective inhibition of mutated Ras is still at a distant prospect. However, given the high prevalence of mutated RAS genes, targeting RAS or downstream effectors of the MAPK-pathway such as MEK and ERK [41, 42] would be a valuable treatment option for BPDCN.

Since mutations in NRAS and KRAS as well as in ATM were found to be recurrent and mutually exclusive, it is tempting to speculate whether these data point to genetically distinct subgroups within the BPDCN phenotype.

At this point the lack of reliable BPDCN models precludes functional analysis or the study of biological implications of our genetic data. Furthermore, the overall rarity of BPDCN precludes analysis of clinical course or outcome data. Nonetheless, our sample size of 33 primary tumour samples at least equals or exceeds the number of specimens in prior studies [18, 22]. In conjunction with these studies, here, we extend the genetic framework of BPDCN, which is an important step in understanding the pathobiology of BPDCN and may also aid in finding novel therapeutic options for this orphan disease.

This study was conducted as an anonymized case- and specimen review via the tissue bank of the National Center for Tumor Diseases (NCT, Heidelberg, Germany). All experiments were performed in accordance with the Declaration of Helsinki.

Raw data analysis was performed using Ion Torrent Software Suite (Version 3.6 and 4.0, respectively). The reads were aligned to the human reference sequence build 38 (hg19) using the TMAP aligner implemented in the Torrent Suite software. Detection of single base pair variants and insertion-deletion polymorphisms (InDels) compared to the human reference sequence was performed using either Ion Torrent Variant Caller (3.6 and 4.0). Detection thresholds for SNPs and InDels were set at an allele frequency of 5%. Variants were annotated and filtered against the dbSNP and COSMIC databases and screened for possible splice site effect using the CLC genomics Suite 6 (CLCbio, Aarhus, Denmark). Copy number variation was determined using the coverage analysis plug-in of the Torrent Suite software.

All tissue samples were analyzed for CDKN2A copy number using a Taqman® copy number assay (Life Technologies, Carlsbad, CA) to measure copy number variation at the CDKN2A locus. The assay is a duplex polymerase chain reaction (PCR) for the CDKN2A gene and the reference gene, RNaseP (normalizer), using 10 ng DNA in quadruplicate PCR according to the manufacturer’s protocol and run on the StepOnePlus real time PCR instrument (Life Technologies). The results were calculated as a ratio relative to a 2-copy control using the Copy Caller software (Life Technologies). Loss of CDKN2A was defined as ≤1.5 copies, no loss was >1.5 copies.

In silico analysis of mutations

The biological impact of the mutations on the structure and function of the respective protein product was predicted in silico by the use of four different software tools: Provean (http://provean.jcvi.org/index.php) [24], Sift (http://sift.jcvi.org/) [25], MutationTaster (http://www.mutationtaster.org/) [26] and PolyPhen (http://genetics.bwh.harvard.edu/pph/data/) [27]. Additionally we used the COSMIC (catalogue of somatic mutations in cancer) database to check our sequencing data for somatic mutations that have already been reported elsewhere.