Apoptosis contributes to antitumor effect of Newcastle disease virus (NDV). Autophagy is a protective response under cellular stress including viral infection. How autophagy interferes with oncolysis of NDV remains unclear. In this study, we found that NDV La Sota strain induced autophagy and preserved autophagic flux in non-small cell lung cancer cells. NDV-induced autophagy promoted viral replication by blocking cancer cells from caspase-dependent apoptosis. Moreover, we found that NDV recruited SQSTM1-mediated mitophagy to control cytochrome c release, and thus blocked intrinsic pro-apoptotic signaling. Finally, we observed an enhanced oncolysis in NSCLC cells treated with NDV in the presence of an autophagy inhibitor 3-methyladenine (3-MA). Interestingly, a more profound antitumor effect could be achieved when administration of 3-MA was postponed to 24 h after NDV infection. Our findings unveil a novel way that NDV subverts mitophagy to favor its replication by blocking apoptosis, and provide rationale for systemic therapeutic cohort combining NDV with autophagy inhibitors in cancer therapy.

Understanding oncolytic mechanisms in cancer cells is crucial for further improvement of oncolytic virotherapy. Newcastle disease virus (NDV) is a single-stranded, negative-sense, non-segmented RNA virus, a member of the Avulavirus genus in the family Paramyxoviridae. NDV possesses oncolytic properties and has been investigated in clinical studies with good safety records [1, 2]. Studies show that apoptosis dominantly contributes to NDV-induced cell death [3, 4]. Both extrinsic and intrinsic apoptotic pathways can be activated in cancer cells after infection with NDV including Beaudette C and La Sota strains [4]. It seems that the intrinsic apoptotic pathway is more important in NDV-mediated cell death, as infection of NDV in a variety of tumor cell lines leads to loss of mitochondrial membrane potential and activation of caspase9 [4]. It has been shown that the virus-specific HN protein causes apoptosis by a yet uncharacterized mechanism in chicken embryo fibroblast cells [1, 5], and that NDV-induced apoptosis in cancer cells is independent of type I IFN signaling [4, 6]. Interestingly, several previous studies have demonstrated that the preferential antitumor activity of NDV is not due to impaired antiviral innate immune responses in tumor cells, in which robust type I IFN responses have been observed after viral infection [7-9]. Some recent reports show that the oncolytic NDV preferentially replicates in apoptosis-resistant cells overexpressing Bcl-XL or Livin, and exerts a more profound antitumor effect [6, 10].

Accumulated evidences show that autophagy may counteract with apoptosis [11-14]. Autophagy is a conserved homeostatic process for eukaryotic cell under metabolic stress or pathogens infection. The autophagic flux is described as a process, by which a portion of cytoplasm is enclosed by isolated membrane to form autophagosome followed by fusion with lysosome to form autolysosome, where the sequestered contents are degraded [15, 16]. Autophagy eliminates damaged or redundant intracellular components, such as unfolded proteins, dysfunctional organelles or viral pathogens, etc. [17-19]. Mitophagy is a type of selective macroautophagy and is a specific autophagic elimination of damaged mitochondria [19]. Recent works reveal that SQSTM1 (sequestosome-1, also known as p62) acts as a signaling hub through its ability to regulate the packing and delivery of polyubiquitinated, misfolded proteins and dysfunctional organelles for their clearance through autophagy in mammalian cells [20-23].

Some experimental evidences show that autophagy is an essential host defense response to fight infection by destroying infectious pathogens trapped within autophagosomes, and plays an important role in the induction of both innate and adaptive immune response [14, 18, 24-26], whereas some studies show that viruses also subvert autophagy to enhance viral replication and release, such as hepatitis C virus, dengue virus, and measles virus [27-31]. It has been shown recently that NDV strain Beaudette C triggers autophagy both in human U251 glioma cells and in chicken cells leading to enhanced virus replication [32, 33]. However, it remains unclear how autophagy promotes viral replication. In this study, we investigated how NDV La Sota strain recruits autophagy to counteract with apoptosis and provided the potential antitumor strategy by combining NDV with autophagy interference.

It has been shown that NDV Beaudette C strain induces autophagy both in U251 glioma and chicken cells. To know whether NDV La Sota strain also elicits such responses, autophagic processes was determined in human non-small cell lung cancer A549 cells. We found that cellular LC3 accumulated to form autophagosomes (Fig. 1A) and lipidation of LC3 was robustly induced following NDV infection (Fig. 1B). In addition, we found that SQSTM1, a crucial adaptor protein cargos contents to autophagosomes for autolysosomal degradation, was markedly reduced 24 h and almost erased 48 h after NDV infection (Fig. 1C), suggesting that the autophagic flux is preserved following NDV infection. This was further confirmed by the fact that lapidated LC3 was massively increased in the presence of chloroquine, an inhibitor of lysosomal degradation (Fig. 1D). Interestingly, lipidation of LC3 was not induced by heat-inactivated NDV (Fig. 1D), suggesting that active viral replication is required for autophagy induction. Taken together, these results demonstrate that NDV infection induces a completed autophagic flux in A549 cells.

We next investigated the role of autophagy in NDV-induced apoptosis. First we confirmed that NDV infection activates intrinsic pro-apoptotic signaling in A549 lung cancer cells, as cytoplasmic cytochrome c release, cleaved capase-9 and -3 were increased after NDV infection in a time-course manner (Fig. 2A). This was further confirmed by that the cell death was significantly decreased in the presence of a pan-caspase inhibitor z-VAD-fmk (Fig. 2B). We then evaluated the apoptosis in lung cancer cells with impaired autophagy. By silencing with siRNAs targeting autophagy related genes ATG5, a key protein for initiation of pre-autophagosomal membrane formation in mammalians, and SQSTM1 (Fig. 2C), we found that the annexin-V positive apoptotic cells were significantly increased both at early and late stage following NDV infection in autophagy-impaired cells (Fig. 2D). This suggests that autophagy counteracts apoptosis after NDV infection. The protective effect of autophagy in NDV infected cells was further evidenced by trypan blue exclusion (Fig. 2E). In line, the cleaved pro-apoptotic proteins caspase-9 and -3 were also enhanced in autophagy-impaired cells after NDV infection (Fig. 2F). Moreover, we further confirmed that NDV-induced cell death was significantly increased in the presence of an autophagy inhibitor 3-methyladenine (3-MA). Taken together, these results show that NDV induces apoptotic cell death and that autophagy plays a protective role against apoptosis. 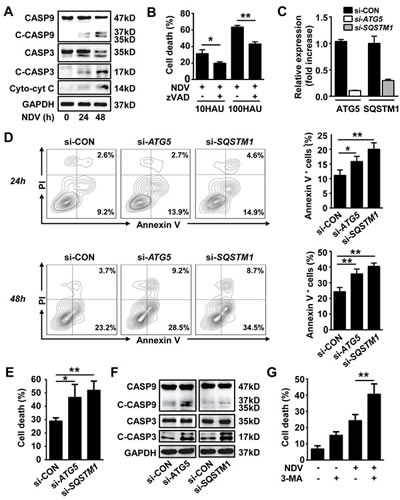 As sufficient viral replication and efficient apoptotic induction are both required in NDV-based oncolysis, it seems that autophagy plays contradict roles in NDV-mediated oncolysis. On the one hand, autophagy promotes viral replication, on the other hand, autophagy compromises NDV-induced apoptosis. We next sought to find a solution for this paradox. As shown in Fig. 3E, while the oncolysis was enhanced in A549 cells treated simultaneously with NDV and 3-MA, a more profound oncolysis was achieved when 3-MA was administered 24 h after NDV infection (Fig. 3E). This result suggests that sophistic manipulation of autophagy is required for efficient NDV-based oncolysis. 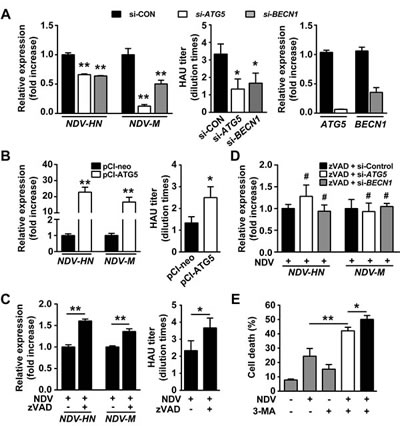 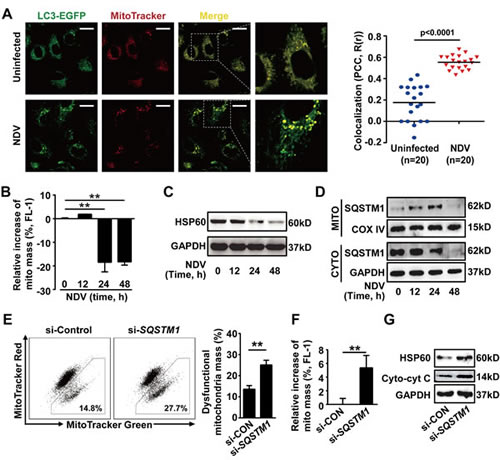 Previous studies have shown that NDV infection results in loss of mitochondrial membrane potential [1, 4, 6], and malfunction of the mitochondrial respiratory chain then increases cytochrome c release leading to caspase-dependent cell death [34, 35]. In this study, we found that mitophagy contributed to elimination of damaged mitochondria following NDV infection, which led to controlled cytochrome c release, therefore, blocked intrinsic proapoptotic cascades. Moreover, we found that NDV-induced mitophagy was mediated by SQSTM1/p62, a protein often overexpressed in many tumor types [36-39]. Given that SQSTM1-mediated mitophagy is required for preventing NDV-induced apoptosis and thus favors viral replication, it might explain why NDV preferentially replicates in cancer cells.

In conclusion, our results clarify the mechanisms by which autophagy facilitates viral replication and provide rationale for systemic therapeutic cohort combining NDV with autophagy interference. This requires further preclinical investigations and might be useful for clinical trial design to improve NDV-based virotherapy.

The siRNA targeting ATG5 (Invitrogen, HS114104), Beclin1/BECN1 (Invitrogen, HSS112731), SQSTM1 (Invitrogen, HSS121770) and negative control siRNA (Invitrogen, 12935400) were all purchased from Invitrogen Stealth RNAi collection. pCI-neo-hATG5-HA (Addgene, Cambridge, MA, #22948) was provided by Noboru Mizushima (Tokyo Medical and Dental University, Tokyo, Japan). pCI-neo was obtained from Promega (Madison, WI, #1841). pBABEpuro-EGFP-LC3 (Addgene, #22405) was provided by Jayanta Debnath (University of California, San Francisco, CA, USA). 100 nM of siRNA or 500 ng/ml expression plasmids coupled with Lipofectamine 2000 (Invitrogen, 11668-019) were used for transfection of A549 on a 6- or 12-well plate according to the manufacturer’s instructions. For all experiments, NDV infection was performed 24 h after siRNA transfection.

NDV La Sota strain was obtained from Jiangsu Academy of Agricultural Sciences (JAAS, Jiangsu province of P.R.China), propagated in 9-day-old SPF embryonated chicken eggs from seed virus, harvested from the allantoic fluid and purified centrifugation at 3000 rpm for 10min. The viral particles in the supernatant were collected and cryopreserved at -80°C. The virus titer was determined by the hemagglutination test in which 1 hemagglutination unit (HAU) is defined as the lowest virus concentration leading to visible chicken erythrocyte agglutination. Briefly, 50 μl aseptic PBS was added to each well of a round-bottomed 96-well dish, mixed with 50 μl viral dilution or infected-cell lysate supernatant in the first column, then repeat mixing and transferring 50 μl to the next well, discard 50 μl from the last well into the bleach solution. Then 50 μl of 0.5% red blood cell working solution was added into each well, mix gently and left at room temperature for 45 minutes. The dilution times leading to visible erythrocyte agglutination was recorded.

Tumor cells were washed once by PBS and infected with NDV in empty DMEM at a dilution of 10 HAU/106 cells for 3 h, and then completed medium was added in each well.

The pBABEpuro-EGFP-LC3 plasmid was transiently transfected in A549 cells 24 h prior to virus infection. Cells were stained with MitoTracker Red (Invitrogen, M7512) at a concentration of 100 nM for 20 minutes at 37°C and then fixed with 4% paraformaldehyde. Cells were observed under FLUOVIEW FV10i confocal microscope (Olympus, Tokyo, Japan) and images were analyzed using FV10-ASW 4.0 Viewer (Olympus).

Apoptotic cell death was detected by Annexin V/propidium iodide (PI) staining assay (Invitrogen, V13241) according to the manufacturer’s protocols. Briefly, cells were harvested and washed once with PBS, then resuspended in 100 μl binding buffer followed by incubation with 2.5 μl Annexin V per test for 20 min. Then 1 μl PI per test was added and then cells were analyzed by a FACSCalibur (Becton, Dickinson and Company, USA).

Mitochondrial mass was measured by fluorescence levels upon staining with 100 nM Mitotracker Green FM for 25 min at 37°C. Cells were then washed with PBS and analyzed at FL-1 by flow cytometry.

Mitochondrial and cytoplasmic proteins were separated using a Mitochondria/Cytosol Fractionation Kit (Beyotime Inst. Biotech, Jiangsu, China, C3601) according to the manufacturer’s protocol. Briefly, cells were harvested and washed twice with ice-cold PBS, cells were then incubated in 500 μl ice-cold mitochondrial lysis buffer on ice for 10 min. Cell suspension was then taken into a glass homogenizer and homogenized for 32 strokes using a tight pestle on ice. The homogenate was centrifuged at 800 g for 10 min at 4oC to remove any unbroken cells. The supernatant was further centrifuged at 8000 g for 10 min at 4oC to remove the mitochondrial fraction (pellet) and cytoplasmic proteins (supernatant). Proteins were quantified and subjected to immunoblotting.

2-tailed Student’s t test was used for all statistical analyses, P < 0.05 were considered as significant difference.

None of the authors have a financial interest to declare.