Growth differentiation factor 15 (GDF15; also referred to as macrophage inhibitory cytokine-1, MIC-1, and nonsteroidal anti-inflammatory drug activated gene-1, NAG-1) is a stress-induced inflammatory cytokine [1, 2]. Under normal physiological conditions, GDF15 is expressed abundantly only in the placenta. However, stressors, such as inflammation and injury, induce GDF15 expression in epithelial cells, fibroblasts, and macrophages. In addition, many pathologic conditions, including insulin resistance, diabetes, cardiovascular disease, impaired cognitive ability, and malignancies, are associated with elevated levels of circulating GDF15 [3–5]. Patients with advanced-stage cancers, including breast, express high levels of GDF15 in tumor tissues and/or sera [6–10].

GDF15 expression, as assessed by IHC (Figure 1), was correlated with baseline clinical characteristics in a cohort (N=592) of patients with breast cancer (Table 1). The majority of patients were older than 50 years (75%) and had low-grade tumors (68%). GDF15 expression (staining score ≥ 1) was observed in approximately two-thirds (65%) of patients. GDF15-positive scoring correlated with high tumor grade (P=0.002), as approximately 75% of patients with high-grade tumors displayed a GDF15 score of 1+. Most (87%) patients in the cohort had fewer than four lymph node metastases. Stratification of patients based on ≤ 3 lymph node metastases versus > 3 lymph node metastases did not show significant correlation with GDF15 staining. The molecular subtypes of breast cancers represented in the cohort were consistent with published literature [6, 20], with 68% estrogen receptor (ER)-positive tumors and 13% human epidermal growth factor receptor 2 (HER2)-positive. A majority of patients in each subtype expressed GDF15, with a statistically higher percentage of ER-negative and HER2-positive tumors exhibiting GDF15-positivity (P=0.03 for each). 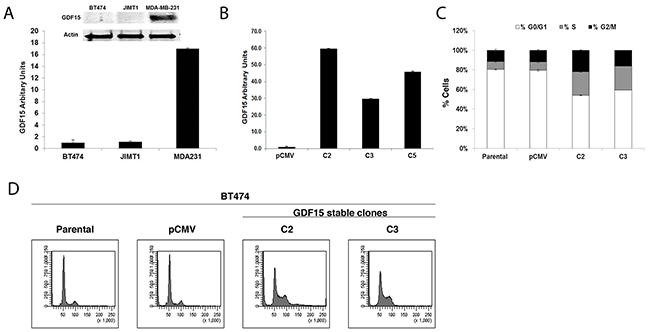 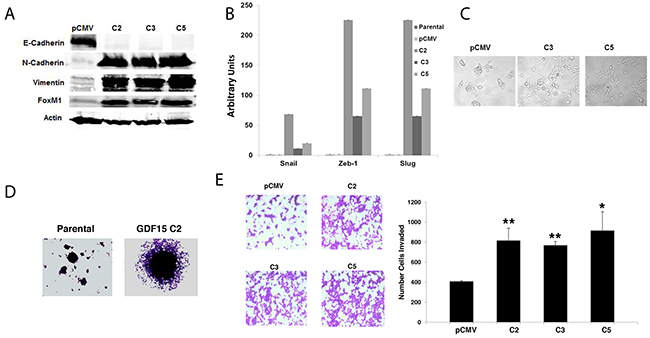 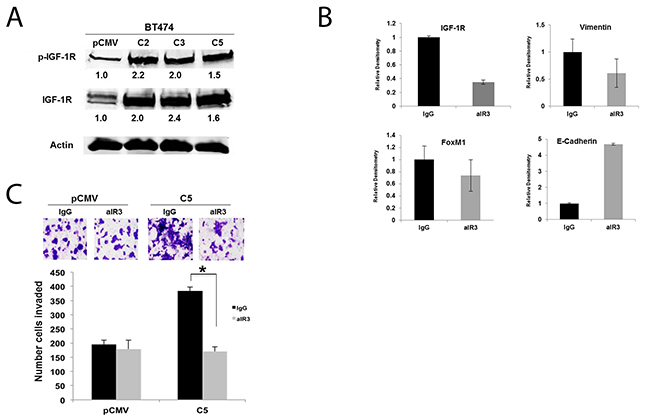 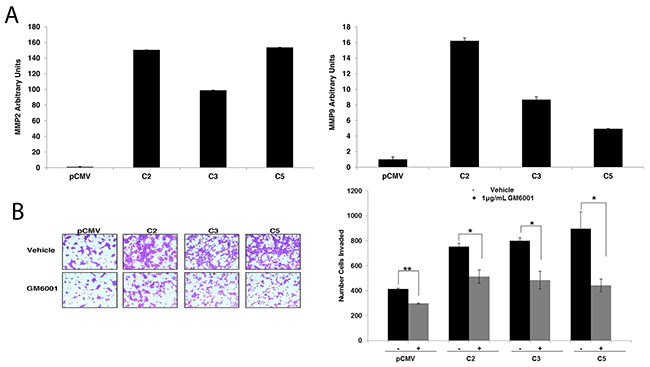 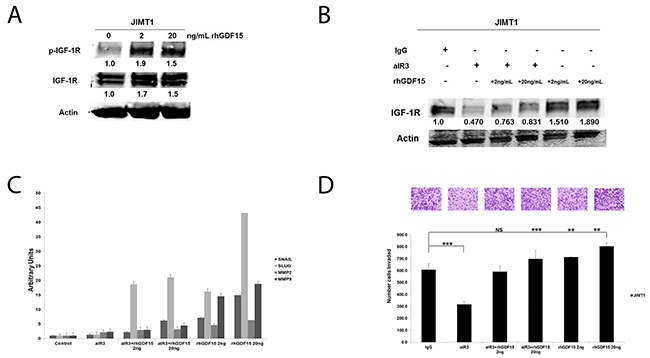 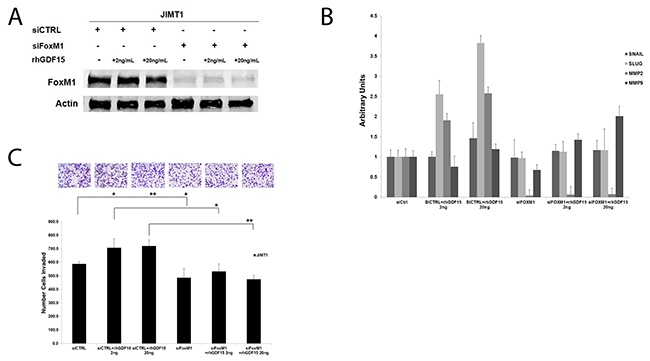 Based on data indicating that GDF15 mediates EMT and invasion, we hypothesized that knockdown of GDF15 expression would block invasiveness of breast cancers that overexpress GDF15. Using siRNA, GDF15 was transiently knocked down in HER2-positive BT474 empty vector pCMV control, BT474 GDF15-overexpressing stable clone, and triple-negative MDA-MB-231 breast cancer cells, which have endogenous overexpression of GDF15 (Figure 9B). Knockdown of GDF15 significantly inhibited breast cancer invasion through basement membrane matrix (Figure 9A). These results establish a functional role for GDF15 in breast cancer invasion, and support further investigation into GDF15-targeting as a potential therapeutic strategy. 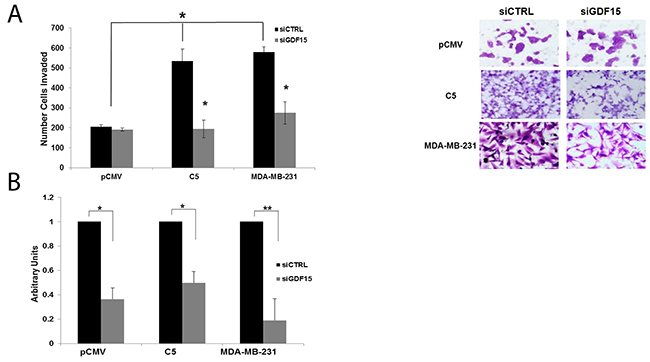 IGF-1R activation and overexpression promote EMT in many tumor types. In breast cancer, IGF-1R signaling induces EMT, migration, and invasion in HER2-positive and triple-negative breast cancer [22, 24]. Acquisition of a mesenchymal phenotype has been reported to confer stem cell-like and migratory characteristics, resulting in recurrent metastases and drug resistance in multiple tumor models [25, 26]. Consistent with the GDF15-driven EMT we observed in our studies, GDF15 was recently shown to maintain stem cell characteristics in breast cancer cell lines [27]. The mechanisms through which IGF-1R promotes a switch to a mesenchymal phenotype are not fully understood. However, IGF-1R activation is known to stimulate MEK-Erk1/2 and PI3K-Akt signaling, which in turn regulate EMT transcription factors. We previously demonstrated that GDF15 induces PI3K and Erk1/2 phosphorylation in HER2-overexpressing breast cancer cells, in association with drug resistance [27]. Further, MEK inhibition blocked the ability of GDF15 to induce tumor sphere formation [16], indicating that MEK activation downstream of IGF-1R activation may contribute to GDF15-stimulated EMT. These data provide rationale for evaluating IGF-1R and MEK inhibition as a potential therapeutic strategy in mesenchymal GDF15-positive breast cancers.

Additional mechanisms are likely to contribute to GDF15-mediated EMT and invasion. Some studies suggest that GDF15 induces phosphorylation of TGF-β signaling effectors Smad2 and Smad3 [14, 17], which are recognized mediators of EMT [28]. Recent studies identified the GDF15 receptor as GFRAL, a distant relative of TGF-β family members [11–13]. Thus, future evaluation of the role of GFRAL and associated signaling pathways in EMT and invasion of GDF15-overexpressing breast cancer cells is warranted. GDF15 also activates focal adhesion kinase (FAK) signaling, driving prostate cancer metastasis [29]. We previously reported that IGF-1R regulates FAK signaling and EMT in triple-negative breast cancer. Further, we and others previously have shown that GDF15 activates HER2 kinase activity [14, 24, 30], resulting in acquired and intrinsic resistance to HER2-targeted antibody therapy [27]. These results are consistent with previous reports that IGF-1R/HER2 cross-signaling causes trastuzumab resistance, and suggest that GDF15 overexpression may represent one mechanism driving activation of the HER2 and IGF-1R receptor kinase signaling network and drug resistance.

Although increased expression of GDF15 is associated with advanced disease in patients with multiple types of malignancies, limited data are available regarding the expression levels of GDF15 in breast cancer. Welsh et al. [10] examined changes in gene expression of secreted proteins in the sera of cancer patients representing 10 different tumor types. Serum levels of GDF15 were elevated in patients with metastatic colorectal (8/8), prostate (8/9), and breast (6/10) cancers when compared with sera from normal controls. Wollmann et al. [31] compared GDF15 transcript levels in 10 breast tumor samples matched with adjacent normal tissue controls, and found higher GDF15 expression in half of the tumor samples. Thus, according to these studies, which included a relatively small number of patient samples, GDF15 expression was elevated in 50% to 60% of serum or tumor tissue specimens from patients with breast cancer. Consistent with those studies, we demonstrate by IHC staining that GDF15 is expressed in 66% (397/605) of patients with breast cancer.

Sasahara et al. [16] recently reported that GDF15 expression was higher in breast cancer tissues compared with normal controls, with HER2-positive tumors demonstrating the highest expression levels of GDF15. We examined potential associations between GDF15 IHC staining and available clinical data, which included age, tumor size, tumor grade, disease involving >3 lymph nodes, ER and HER2 positivity, and overall survival. GDF15 expression was significantly associated with high tumor grade, and ER-negative or HER2-positive status. A limitation of our IHC study was that most patients in this cohort had low-grade tumors with either non-metastatic disease or fewer than 3 lymph node metastases. Thus, this cohort may represent a relatively low-risk population or subgroup with primarily localized or locally invasive disease. Future analyses should examine cohorts that include a greater percentage of patients with lymph node-positive or metastatic disease to determine if GDF15 overexpression is associated with metastasis, recurrence, or reduced survival rates in patients with advanced-stage disease, as is reported in other tumor types [32, 33]. These studies should also evaluate potential subtype-specificity of GDF15 expression in HER2-positive and ER-negative breast cancer, based on results presented here, and associations between GDF15 expression and treatment response or survival.

In summary, while GDF15 exhibits pleiotropic effects in cancer cells [7], the majority of studies support a role for GDF15 in disease progression, with overexpression linked to EMT, invasion and metastasis. Our studies are the first to report activation of IGF-1R-FoxM1 as a mechanism of invasion in GDF15-overexpressing breast cancers, providing rationale for preclinical evaluation of treatments that co-target IGF-1R and FoxM1. Further, based on the reduced invasiveness of HER2-positive and triple-negative breast cancers in response to GDF15 knockdown, future studies should evaluate GDF15 as a potential molecular target in breast cancer.

JIMT1 cells were purchased from DSMZ (Braunschweig, Germany); all other cell lines were purchased from American Type Culture Collection (Manassas, VA). MDA-MB-231, JIMT-1, and BT474 cells were maintained in Dulbecco’s Modified Eagle’s Medium (DMEM) with 4.5 g/L glucose, glutamine, and sodium pyruvate (Corning; Manassas, VA) with 10% FBS and 1% penicillin/streptomycin. All cells were cultured in humidified incubators at 37°C with 5% CO2.

Cells were plated in antibiotic-free media at a concentration of 2×105 cells/mL. The next day, cells were transfected using Lipofectamine 2000 (Invitrogen; Carlsbad, CA) with 100 nM GDF15 siRNA, 100 nM FOXM1 siRNA, or control siRNA (Santa Cruz Biotechnology) according to the manufacturer’s protocol. Media was changed after 6 h of transfection and replaced with complete media. Cells were harvested after 24 or 48 h.

Cells were plated and serum starved for at least 24 h prior to stimulation with vehicle control, 2 or 20 ng/mL of rhGDF15 for varying time points. Experiments were repeated at least twice.

Cells were seeded (5×104) in 1% agar-coated 96-well plates and cultured for 48 h in a humidified atmosphere containing 5% CO2 at 37ºC. Intact tumor spheroids were carefully transferred to a 96-well plate and cultured in complete media for 24 h. Spheroids and migrated cells were fixed with 100% methanol, stained with 0.05% crystal violet, and observed using a normal light microscope (20×) and Olympus DP-30BW digital camera. Eight replicates were included per group, and experiments were repeated three times.

Cells were plated in serum-free media in BD BioCoat Matrigel Invasion Chambers (BD Biosciences; Franklin Lakes, NJ) (1×105 cells/mL) with 0.75 mL chemoattractant (culture media containing 10% FBS) in each well. Depending on the experiment, cells were pre-treated with control mouse IgG or alpha IR3 (0.25 μg/mL) added directly to the chamber, or transfected with control siRNA or GDF15 siRNA overnight prior to placing cells in invasion chambers. Non-invading cells were removed from the interior surface of the membrane by scrubbing gently with dry cotton tipped swab. Each insert was then transferred into 100% methanol for 10 minutes followed by crystal violet staining for 20 minutes. Membranes were washed in water, allowed to air dry completely before being separated from the chamber, and then mounted on slides with permanent mounting medium Permount (Fisher Scientific). Multiple photographs of each sample were taken at 20× magnification, with triplicates per treatment group. The number of cells was counted in each field, and the sum of cells in all fields was calculated for each sample. Triplicate cultures were included per group, and experiments were repeated at least twice.