Vascular smooth muscle cells (VSMCs) are the major construction of the vasculature and act crucial roles in maintaining blood pressure and vessel tone [1–5]. Deregulated proliferation of VSMCs is a central factor in various cardiovascular diseases including hypertension, coronary heart disease and atherosclerosis [2, 6–9]. VSMCs proliferation and migration can be stimulated by a lot of cytokines and growth factors such as TNF-α and leptin, which act an important role in the development of these diseases [10–12]. However, the mechanism of how these moleculars modulate the VSMCs proliferation remains unclear.

Long noncoding RNAs (lncRNAs) are defined as RNAs with length more than 200 nucleotides with limited or without palpable protein-coding functions [13–18]. Recently, various studies have demonstrated that lncRNAs play important functional roles in biological processes such as cell proliferation, metastasis, development, differentiation, migration and invasion [19–24]. Notably, various lncRNAs were found to be deregulated in a lot of tumors including gastric cancer, colon cancer, hepatocellular carcinoma, gallbladder carcinoma and breast cancer [13–15, 25, 26]. BRAF-activated noncoding RNA (BANCR) is a 693-bp lncRNA firstly identified in melanoma cells [27, 28]. Deregulated expression of BANCR was found in lung cancer, colorectal cancer, gastric cancer and bladder cancer [29–32]. BANCR modulated cell migration, invasion and proliferation and acted as a potential tumor suppressor or oncogene [28, 29, 33, 34]. However, its expression, function and roles in VSMCs are unknown and need to be investigated.

BANCR expression was upregulated by TNF-α in the VSMCs 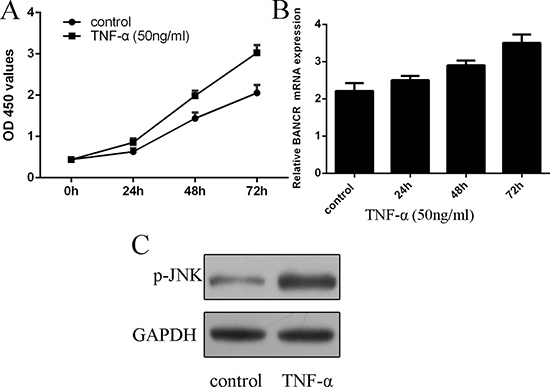 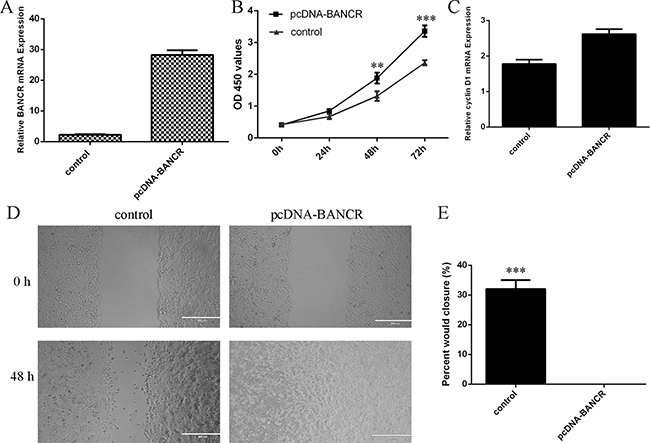 As shown in the Figure 4A, the JNK was activated in the pcDNA-BANCR transfected VSMCs compared with control transfected cells. Moreover, this effect was inhibited by treated with SP600125, which was the inhibitor of the JNK (Figure 4B). 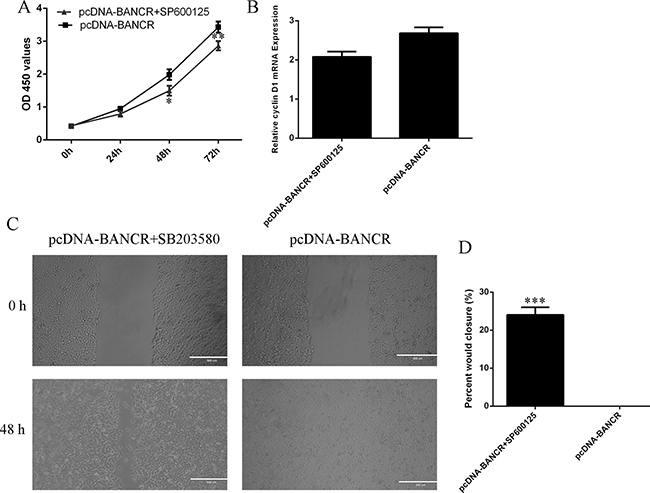 Human atherosclerosis plaques samples in coronary artery patients and healthy vessels tissues were collected from the patients undergoing the surgery in our Departement. This study was approved by the Research Ethics Committee of the Fourth Hospital of Harbin Medical University. Written informed consent was obtained by all patients and this study aslo was complied with the Declaration of Helsinki. The VSMCs were purchased from Cascade Biologics (Portland) and kelpt in the recommended culture conditions. The pcDNA-BANCR and pcDNA-control was purchased from Genama (Shanghai, China) and transfected to the VSMCs by using the DharmaFECT1 Reagent (Dharmacon, TX, USA) according to the information.

Total RNAs were isolated from cells by using TRIzol kit (Invitrogen, USA) following to the manufacturer’s information. The qRT-PCR reaction was measured with the SYBR Green mix (Bio-Rad, CA, USA). The expression of GAPDH was monitored as the internal control. The real-time PCR was performed on the iQ-5 system (Bio-Rad) and the average Ct was used for calculations. The bellow primer was used: BANCR, Forward: 5′-ACAGGACTCCATGGCAAACG-3′; reverse: 5′-ATGAAGAAAGCCTGGTGCAGT-3′. GAPDH, Forward: 5′-GGGAGCCAAAAGGGTCAT-3′; reverse: 5′-GAGTCCTTCCACGATACCAA-3′.

Total cellular protein was isolated by using lysis buffer and the protein concentration was measured by BCA assay (Pierce, Rockford, IL, USA). Equal proteins were separated on the 10% SDS and transferred to the PVDF membrane. After blocking with 5% non-fat milk, the membrane was incubated with the primary antibodies (p-JNK and GAPDH, Sigma) and then incubated with horseradish peroxidase-conjugated secondary antibodies (Santa Cruz, CA). The protein signal was visualized by using the ECL chemiluminescence (Pierce).

For cell proliferation assay, the cell was seeded in the 96-well plate and cultured for 0, 24, 48, 72 hours. Cells were incubated with the MTT (3-(4, 5-dimethylthiazol-2-yl)-2,5-diphenyltetrazolium bromide) for 1 hour. The absorbance OD was determined using the plate reader (PerkinElmer, MA, USA). For the invasion analysis, the insert was incubated with Matrigel (Sigma, St Louis, USA). Cell was cultured on the upper chamber with no-serum medium. 10% serum was added to the lower chamber and the cell was cultured for 48 hours. The cell which invaded into the lower surface was fixed with the paraformaldehyde and stained with crystal.

The result was expressed as the mean ± standard deviation (SD). Statistical assay was done using the SPSS program ver. 17 (SPSS, Chicago, USA). The signicant difference between groups was determined using Student’s t-test or ANOVA. P < 0.05 was thought to be statistically significant.