* These authors equally contributed to this work

Though tumor necrosis factor related apoptosis inducing ligand (TRAIL) has been used as a potent anticancer agent, TRAIL resistance is a hot-issue in cancer therapy. We investigated the antitumor mechanism of Tanshinone I to sensitize prostate cancer cells to TRAIL. Comibination of Tanshinone I and TRAIL exerted synergistic cytotoxicity, increased cleaved PARP, sub G1 population, the number of TUNELpositive cells, activated caspase 8, 9 and ROS production in PC-3 and DU145 cells. Of note, combination of Tanshinone I and TRAIL enhanced the protein expression of death receptor 5 (DR5) and attenuated anti-apoptotic proteins. RT-PCR and RT-qPCR analyses confirmed that co-treatment of Tanshinone I and TRAIL up-regulated DR5 and microRNA 135a-3p at mRNA level or activity of DR5 promoter and attenuated phosphorylation of extracellular signal regulated kinases in PC-3. Conversely, the silencing of DR5 blocked the increased cytotoxicity, sub G1 population and PARP cleavages induced by co-treatment of Tanshinone I and TRAIL. Interestingly, miR135a-3p mimic enhanced DR5 at mRNA, increased PARP cleavage, Bax and the number of TUNEL positive cells in Tanshinone I and TRAIL cotreated PC-3. Overall, our findings suggest that Tanshinone I enhances TRAIL mediated apoptosis via upregulation of miR135a-3p mediated DR5 in prostate cancer cells as a potent TRAIL sensitizer.

Prostate cancer is one of the most common cancers in men worldwide [1]. Most prostate cancer related deaths result from cancer metastasis, the spread of cancer from the prostate to other organs, bones and lymph nodes [2]. Though anti-cancer drugs such as Eulexin, Flutamide and Nilandron have been used for treatment of prostate cancer, their side effects have still occurred. Recent studies reported that TRAIL and microRNA (miR)s were suggested as potential biomarker or therapeutic potential in prostate cancer cells [3].

TNF-related apoptosis-inducing ligand (TRAIL) (Apo2 ligand [Apo2L]) that is a member of TNF superfamily was known to induce two death receptor DR4 (TRAIL-R1) and DR5 (TRAIL-R2) [4, 5]. There are accumulating evidences that TRAIL resulted in cell death in various cancer cell types such as colon, [6] ovarian [7] or hepatocellular carcinoma cells [8] as a selective anticancer agent.

Cryptotanshinone, Tanshinone I, and Tanshinone IIA were known as the three major bioactive compounds from Dansen, the dried roots of the medicinal plant Salvia miltiorrhiza [11] that has been traditionally used for treating cardiovascular diseases [12]. Recent study reported that Salvia militiorrhiza with TRAIL showed evident cytotoxicity against the human lung adenocarcinoma cell line A549 and ovarian adenocarcinoma cell line [13].Though Tanshinone I was shown to exert anti-cancer effects in non-small lung cancer [14], and breast cancer cells [15], its anti-tumor mechanism was not fully understood in prostate cancer cells. 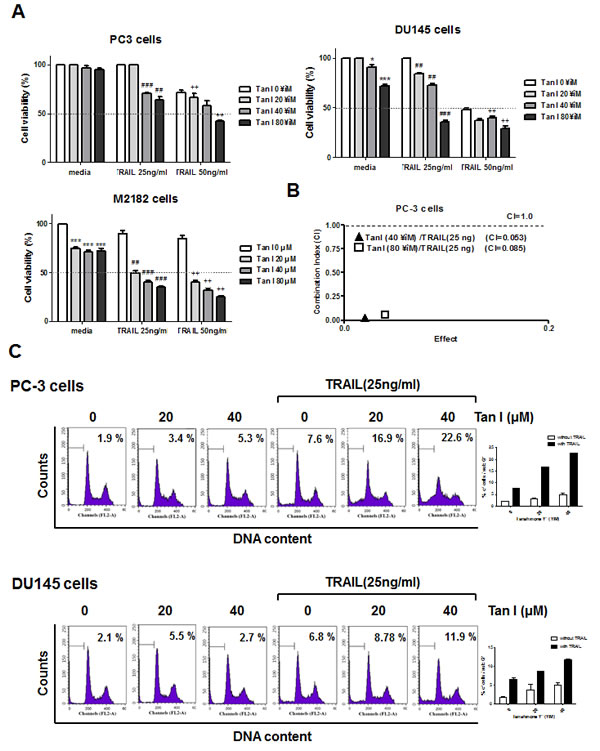 Combination of Tanshinone I and TRAIL activated PARP and caspase 8, regulated the Bcl-2 family proteins and increased the level of ROS in PC-3 and DU145 cells.

Apoptosis is induced through cell death extrinsic pathway or through mitochondrial dependent intrinsic pathway[23]. Western blotting assay showed that combination of Tanshinone I (0, 20, 40 μM) and TRAIL (25 ng) activated caspase 8, caspase 9, caspase 3 and cleaved PARP in PC-3 or DU145 cells (Fig 2C). Furthermore, combination of Tanshinone I and TRAIL suppressed the expression of pro-survival genes such as Bcl-XL and Bcl-2 (Fig 2C) and also attenuated phosphorylation of extracellular signal regulated kinases (ERK), but did not affect p-AKT in PC-3 cells (Fig 2D). In addition, ROS level was determined in PC-3 and DU 145 cells by combination of TRAIL and/or Tanshinone I by fluorescent 2’,7’-dichlorofluorescein (DCF) methods. As shown in Fig 2E, Tanshinone I and TRAIL combination increased the level of ROS in PC-3 and DU 145 cells. 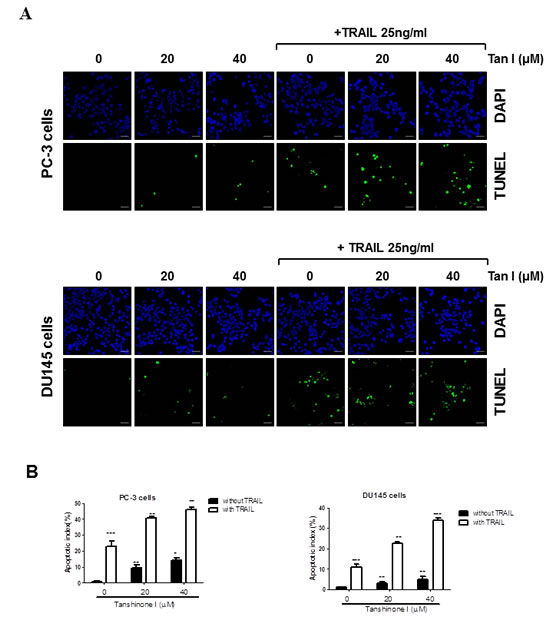 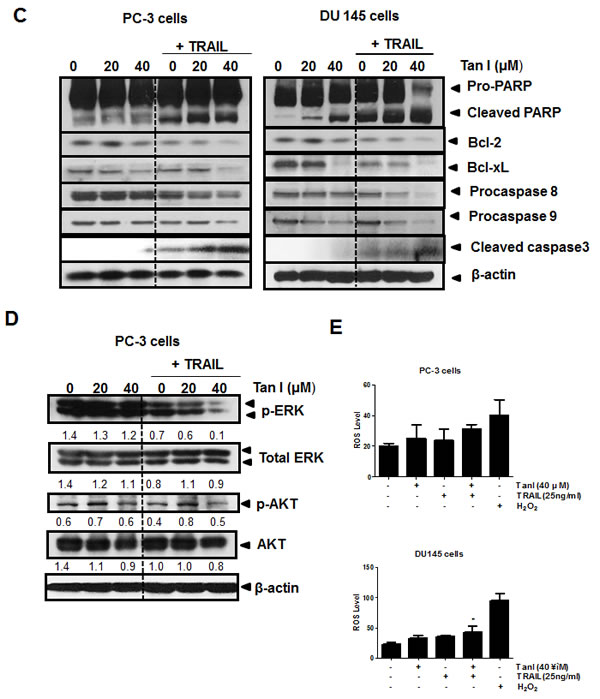 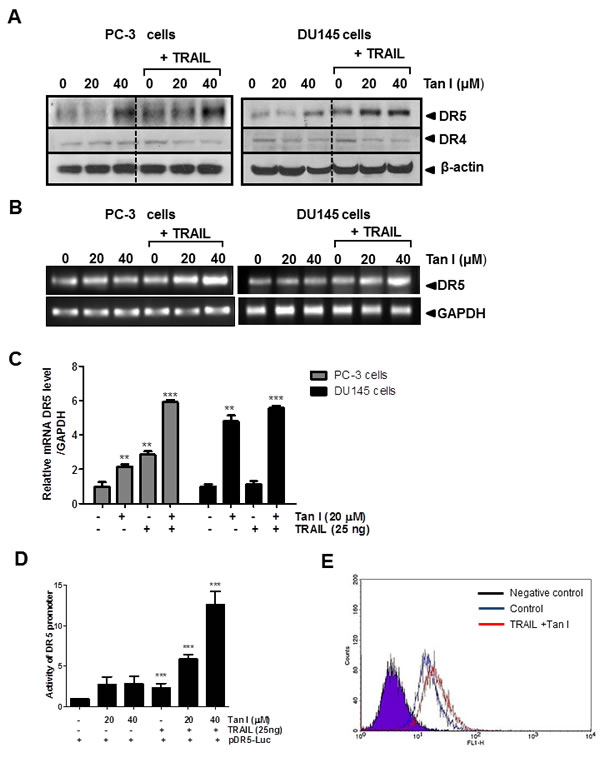 Silencing of DR5 suppressed the ability of Tanshinone I and TRAIL combination to enhance cytotoxicity, PARP cleavage and sub G1 population PC-3 cells. 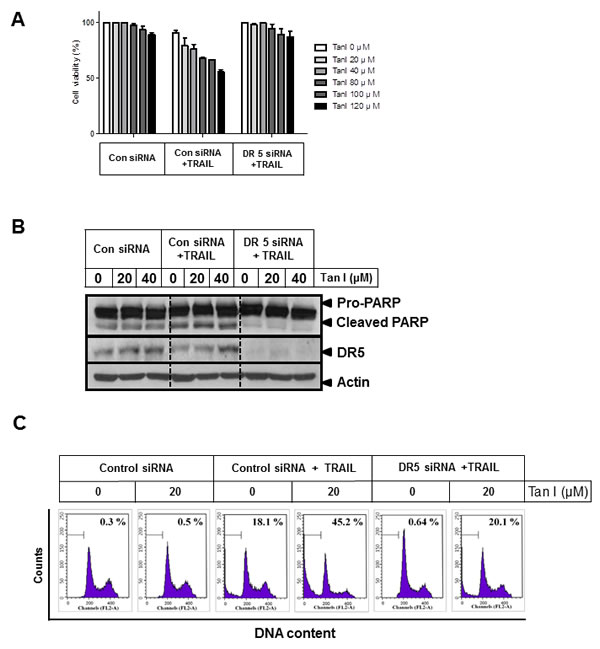 MicroRNAs, non-coding RNAs, play an important role in apoptosis [24, 25]. MicroRNA 135a was known as a selective killer in glioma cancer cells [20] and a tumor suppressor in renal cell carcinoma [19]. We selected the miR135a for TRAIL combination study among many microRNAs, since bioinformatics analysis through microRNA.org predicted that the binding site of miR135a was at the 3’-UTR of DR5 mRNA. In the current study, we checked whether miR135a-3p mediates apoptosis induced by combination of TRAIL and Tanshinone I in PC-3 cells. Here, the expression of miR135a-3p was upregulated by combination of Tanshinone I and TRAIL in PC-3 cells (Fig 5A). Furthermore, overexpression of miR135a-3p enhanced upregulation of DR5 at mRNA or protein level by RT-qPCR (Fig 5B), RT-PCR and Western blotting (Fig 5C). 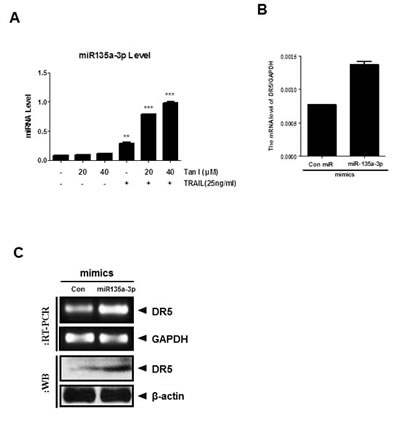 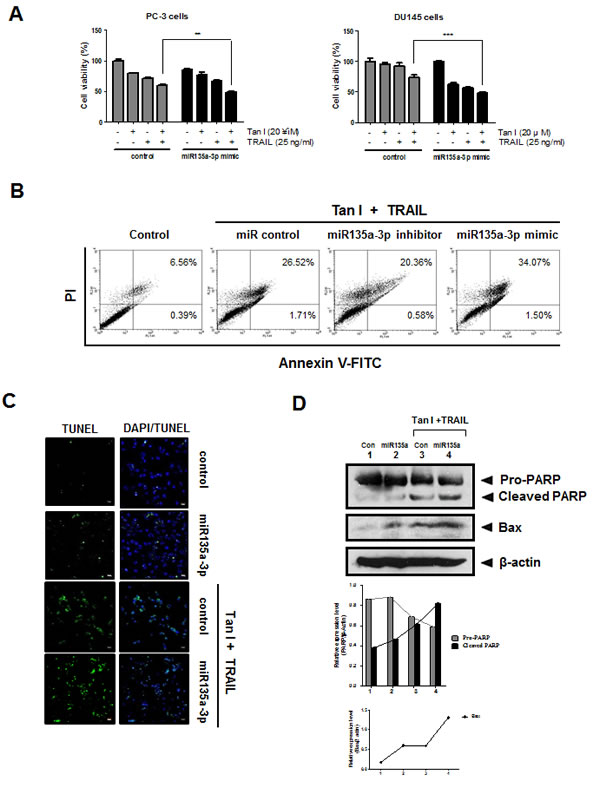 Though TRAIL has been considered as a potent anticancer agent in several cancers such as colon [6], prostate [26-28], breast [29, 30], bladder and kidney cancers [31, 32], its resistance during cancer therapy is a hot issue to overcome. Thus, recently several natural compounds such as quercetin [33], curcumin [34], artepillin C [35], azadirone [36], emetine [37], crytotanshinone [38] and salirasib [39] are attractive as TRAIL sensitizers in many cancers. In the current study, we provide evidences that Tanshinone I sensitizes the prostate cancer cells to TRAIL induced apoptosis via upregulation of miR 135a-3p mediated DR5.

It is well known that apoptosis is induced via two typical apoptotic pathways such as mitochondrial dependent intrinsic pathway and cell death receptor dependent extrinsic pathway in cancers [40-42]. Also, there are accumulating evidences that overexpression of cell survival or anti-apoptotic proteins such as Bcl-2, and Bcl-xL contributes to TRAIL resistance in cancer cells [43] and TRAIL induces apoptosis by binding to its cell surface death receptors such as DR4 and DR5 [44]. In this regard, our western blotting showed that combination of Tanshinone I and TRAIL attenuated the anti-apoptotic proteins such as Bcl-2, Bcl-XL and also activated caspase 8, 9 and DR5 in PC-3 and DU145 cells. We also confirmed the upregulation of DR5 in PC-3 cells by combination of Tanshinone I and TRAIL by promoter assay and FACS analysis for cell surface DR5 expression, demonstrating that Tanshinone I can sensitize prostate cancer cells to TRAIL induced apoptosis via upregulation of DR5 and suppression of survival genes. Conversely, the silencing of DR5 blocked the increased cytotoxicity and sub G1 population and PARP cleavages induced by co-treatment of Tanshinone I and TRAIL in PC-3 cells.

It is well documented that TRAIL induces apoptosis via microRNA regulation [45] including miR34a/ [46] or miR-494 [47] in cancer cells. Thus, Farooqi et al [3] suggested that miRNA regulation of TRAIL-mediated signaling in prostate cancer cells can provide potential biomarkers for the characterization of patients as responders and non-responders for TRAIL-based therapy. Recently, miR-135a was also reported to inhibit the proliferation of renal carcinoma [19], induce apoptosis in gastric cancer cells [48] and promote drug sensitivity in cancer cells[49]. Our RT-PCR and RT-qPCR analyses confirmed that combination of Tanshinone I and TRAIL up-regulated miR135a-3p and DR5 at mRNA level or activity of DR5 promoter in PC-3 cells, indicating the possible involvement of miR135a-3p along with DR5 upregulation in antitumor activity of Tanshinone I and TRAIL in PC-3 cells.

Of note, overexpression of miR135a-3p using its mimic plasmids enhanced the ability of Tanshinone I and TRAIL combination to promote cytotoxicity, upregulate DR5 at mRNA, cleaved PARP and increase the number of TUNEL positive cells in PC-3 cells compared to untreated control, implying that miR135a-3p plays a pivotal role in apoptotic activity by combination of Tanshinone I and TRAIL in PC-3 and DU145 cells.

Collectively, our results demonstrate that combination of Tanshinone I and TRAIL synergistically induce apoptosis via upregulation of miR135a-3p and DR5 in prostate cancer cells and overexpression of miR135a-3p enhances upregulation of DR5 leading to cell death by combined treatment of TRAIL and Tanshinone I. Thus, our findings suggest that Tanshinone I can be used as a potent sensitizer for TRAIL-based combination therapy in prostate cancer cells. 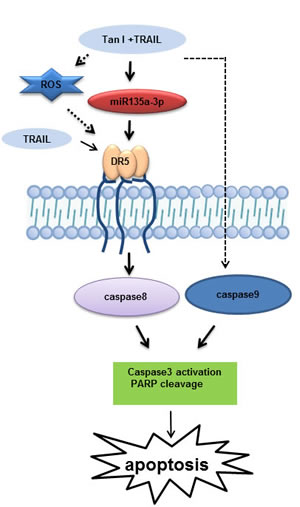 Fig 7: A schematic representation of the signaling pathway affected by combination of Tanshinone I and TRAIL in prostate cancer cells.

The cytotoxic effect of Tanshinone I and/or TRAIL against PC-3 , M2182, or DU145 cells was evaluated by using 3-(4, 5-dimethylthiazol-2-yl)-2,5-diphenyltetrazolium bromide (MTT) assay (Sigma, St. Louis, MO, USA) according to the manufacturer’s instruction. Briefly, prostate cancer cells were seeded onto 96-well microplate and treated with various concentrations of Tanshinone I (0, 20, 40 or 80 μM) (Sigma, St. Louis, MO, USA) and/or TRAIL (25 or 50 ng) (Sigma, St. Louis, MO, USA) for 24 h. MTT solution (5 mg/ml) was added and formazan was dissolved with MTT lysis solution (20% SDS and 50% dimethylformamide). To measure the optical density, microplate reader (TECAN, Austria) at 450 nm was used. Cell viability was determined as a percentage of viable cells in Tanshinone I and/or TRAIL treated group versus untreated control.

PC-3 or DU145 cells were treated with Tanshinone I and/or TRAIL for 24 h and fixed in 75% ethanol. Fixed cells were resuspended in PBS containing RNase A (1 mg/ml), and incubated for 1 h at 37°C. After incubation, fixed cells were stained with propidium iodide (50 µg/ml) for 30 min at room temperature in dark for sub G1 population and also for early and late apoptosis, Annexin-V FITC/ propidium iodide double staining was performed according to the manufacturer’s instruction. To analyze the DNA contents of the stained cells, CellQuest Software with the FACSCalibur flow cytometry was used (Becton Dickinson, Franklin Lakes, NJ).

To detect cell death, the DeadEndTM Fluorometric terminal deoxynucleotidyl transferase-mediated dUTP-biotin nick end labeling (TUNEL) system kit was used according to the manufacturer’s instructions (Sigma, St. Louis, MO, USA). In brief, DU145 or PC-3 cells treated with Tanshinone I and/or TRAIL for 24 h were washed with cold PBS. Cells were fixed with 4% paraformaldehyde for 30 min and washed twice with PBS for 2 min. Fixed cells in permeabilization solution (0.1%Triton X-100 and 0.1% Sodium citrate) were washed and incubated with TUNEL assay mixture for 60 min. The TUNEL-stained cells were visualized by a FLUOVIEW FV10i confocal microscopy (Olympus, Tokyo, Japan).

To determine the surface expression of the DR5, FACS analysis was carried out. PC-3 cells treated with Tanshinone I and/or TRAIL for 24 h were twice washed with PBS and incubated with 10 μg/ml DR5-FITC conjugated or mouse IgG antibody (Abcam, United Kingdom) in PBS for 1 h at 4°C. After washing, cells were analyzed by flow cytometry using a FACS Calibur flow cytometer (Becton Dickinson, Franklin Lakes, NJ).

PC-3 or DU145 cells were cultured and then pre-incubated with dichloro-dihydro-fluorescein diacetate (DCFH-DA) for 1 h at 37°C. After incubation, DCFH-DA added cells were treated with Tanshinone I and/or TRAIL for 1 h at 37°C. To measure intracellular levels of ROS, the concentration of fluorescent 2’,7’-dichlorofluorescein (DCF) was quantified in oxiselect intracellular ROS assay kits (Cell Biolabs, CA, USA) using Fluoroskan Ascent microplate fluorometer (Thomas scientific, NJ, USA).

miR135a-3p or control mimic plasmid (200 nM) (Genolution, Korea) was transfected into PC-3 cells using lipofetamine 2000 (Invitrogen, Carlsbad, CA, USA) reagent according to the manufacture’s protocol. To evaluate the expression of miR135a-3p, total RNA from PC-3 cells treated by Tanshinone I and/or TRAIL was isolated by QIAzol (Invitrogen). To construct microRNA cDNA, GenoExplorer TM miRNA cDNA kit (GenoSensor Corporation, Arizona, USA) was used according to the manufacture’s protocol. To measure the level of microRNA, RT-qPCR analysis was performed with the LightCycler TM instrument (Roche Applied Sciences, Indianapolis, IN). MicroRNA primers were purchased from GenoExplorer TM (GenoSensor Corporation, Arizona, USA) and U6 primer was used to normalized the level of microRNAs.

Statistical analyses of the data were conducted using Sigmaplot version 12 software (Systat Software Inc., San Jose, CA). All data were expressed as means ± standard error of the mean (SEM). The statistically significant differences between control and treatments were calculated by the Student’s t-test and one-way ANOVA test .

The authors have declared that there is no conflict of interest.

This work was supported by the National Research Foundation of Korea(NRF) grant funded by the Korea government(MSIP) (No. No. 2012-0005755).