Saikosaponin a (SSa), one of the main active components of Bupleurum falcatum, has been reported to have anti-inflammatory effect. In the present study, we investigated the anti-inflammatory effect of SSa on IL-1β-stimulated human osteoarthritis chondrocytes. The cells were pretreated with SSa 12 h before IL-1β treatment. The production of PGE2 and NO were detected by ELISA and Griess method. The levels of MMP1, MMP3, and MMP13 were measured by ELISA and qRT-PCR. The expression of NF-κB and LXRα were tested by western blot analysis. The results showed that SSa inhibited IL-1β-induced PGE2 and NO production in a concentration-dependent manner. SSa also suppressed IL-1β-induced MMP1, MMP3, and MMP13 production. Furthermore, SSa significantly attenuated IL-1β-induced phosphorylation levels of NF-κB p65 and IκBα. SSa also up-regulated the expression of LXRα. The inhibition of SSa on PGE2, NO, MMP1, MMP3, and MMP13 production were reversed by LXRα siRNA or GGPP, the inhibitor of LXRα. In conclusion, our results demonstrated that SSa inhibited inflammatory responses in human chondrocytes in vitro. SSa might be a potential therapeutic drug for osteoarthritis.

Osteoarthritis (OA), a common form of arthritis, is characterized by degradation and destruction of cartilage matrix and inflammatory responses in chondrocytes [1]. The pathophysiology of OA is complex. However, accumulating evidence suggested that inflammation played a critical role in the development of OA [2, 3]. IL-1β is an important inflammatory cytokine that involved in the pathologic process of OA [4]. IL-1β could induce the activation of NF-κB signaling pathway, which leads to the release of inflammatory mediators [5]. These inflammatory mediators, such as PGE2, NO, and MMP, lead to articular cartilage damage [6]. In recent years, non-steroidal anti-inflammatory drugs were often used in the treatment of OA [7]. However, due to the numerous side effects, the development of effective and safe drugs to treat OA is urgently needed.

Saikosaponin a (SSa), a bioactive ingredient isolated from Bupleurum falcatum, has been known to exhibit anti-inflammatory effect [8]. Previous study showed that SSa could inhibit LPS-induced inflammatory cytokines production in RAW264.7 cells [9]. SSa also inhibited carrageenan-induced paw edema in rats and acetic acid-induced vascular permeability in mice [8]. Furthermore, SSa has been reported to inhibit oxidative stress and inflammation in LPS-stimulated human umbilical vein endothelial cells [10]. SSa has been reported to inhibit inflammation in hypertrophied 3T3-L1 adipocytes [11]. However, the effects of SSa on IL-1β-stimulated chondrocytes has not been reported. In the present study, we aimed to investigate the anti-inflammatory effect of SSa on IL-1β-stimulated human osteoarthritis chondrocytes and clarify the underling mechanism.

SSa did not affect the viability of human osteoarthritis chondrocytes

In this study, we firstly detected the effects of SSa on the viability of human osteoarthritis chondrocytes. As shown in Figure 1, compared with the control group, SSa at concentration of 5, 10, 15μM did not affect the viability of human osteoarthritis chondrocytes (Figure 1). Therefore, the concentration of 5, 10, 15μM were used in the subsequent study. 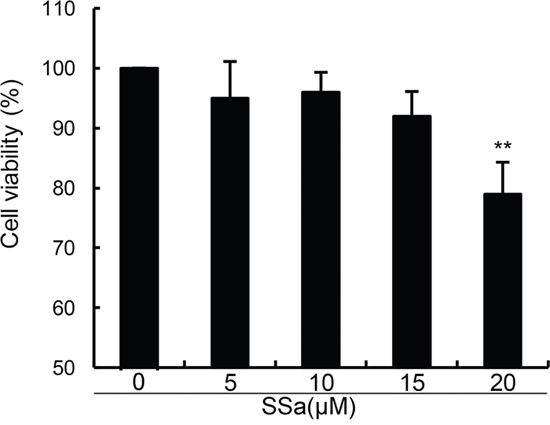 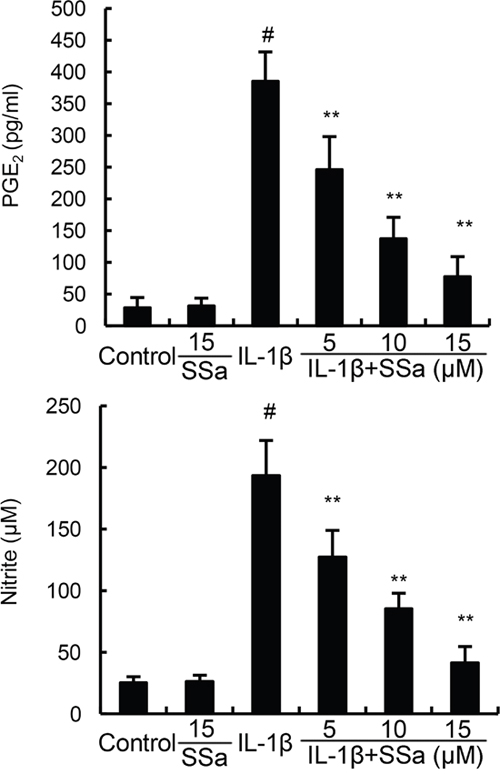 Effects of SSa on IL-1β-induced MMP1, MMP3, and MMP13 expression 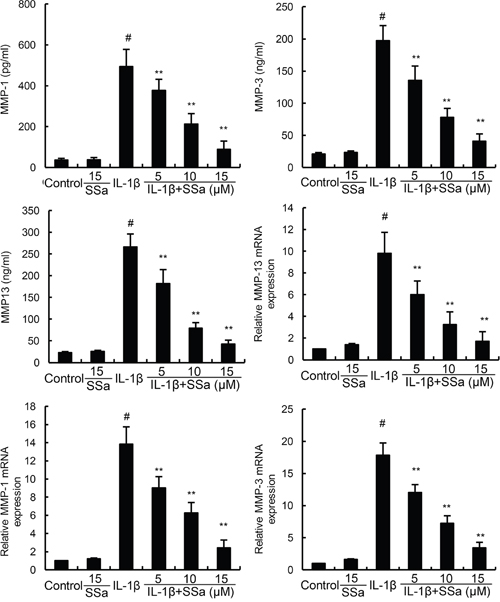 We investigated the effects of SSa on IL-1β-induced NF-κB activation to test the anti-inflammatory mechanism of SSa in human osteoarthritis chondrocytes. As shown in Figure 4, compared with the control group, the levels of phosphorylation of NF-κB p65 and IκBα increased significantly in IL-1β-stimulated human osteoarthritis chondrocytes. However, IL-1β-induced NF-κB activation were significantly inhibited by treatment of SSa. 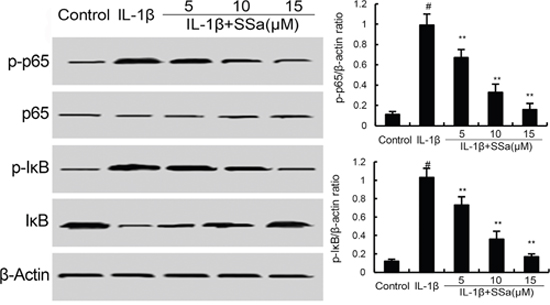 Effects of SSa on LXRα expression

LXRα, the members of the nuclear hormone receptor superfamily, has been reported to have the ability to regulate the activation of NF-κB [12]. Therefore, in the present study, the effects of SSa on LXRα expression were detected by western blot analysis. As shown in Figure 5, SSa up-regulated the expression of LXRα in a dose-dependent manner. 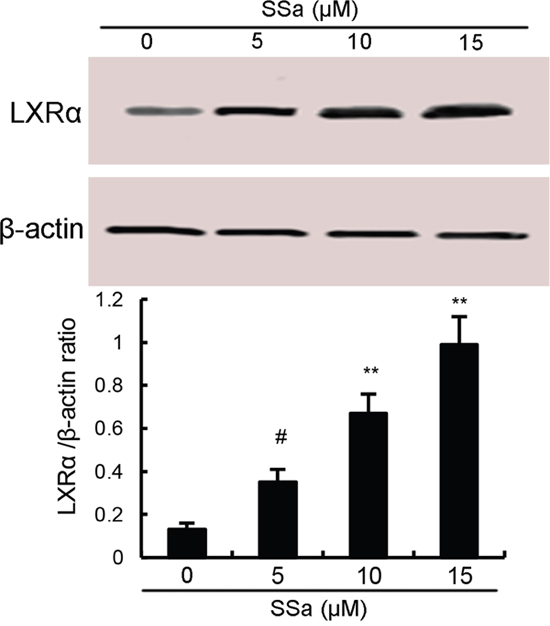 Figure 5: Effects of sesamin on LXRα expression. The values presented are the means ± S.E.M. of three independent experiments. #P < 0.05 vs. control group.

The anti-inflammatory effects of SSa is regulated by LXRα 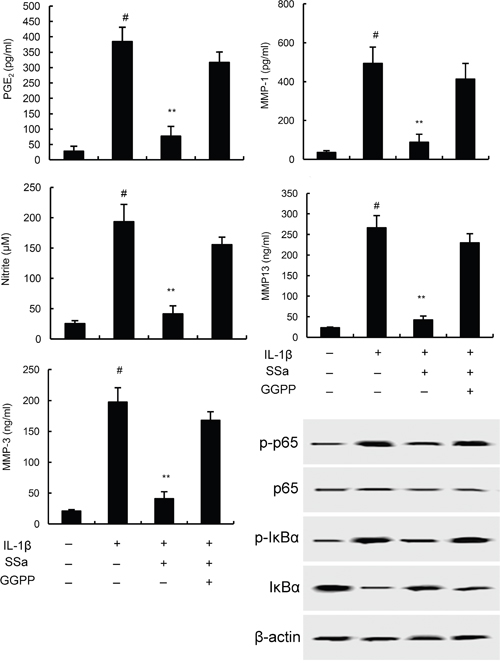 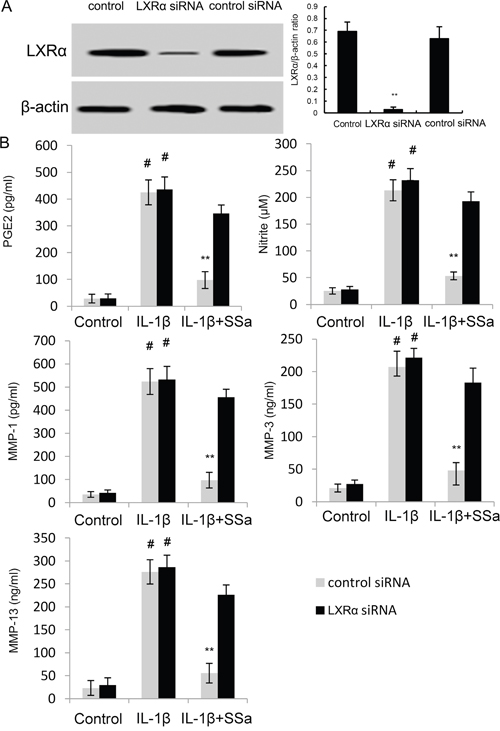 Figure 7: (A) Effects of siRNA on LXRα expression was detected by western blot analysis. (B) Effects of LXRα siRNA on the anti-inflammatory effects of SSa. The values presented are the means ± SEM of three independent experiments. #p < 0.05 vs. control group; *p < 0.05, **p < 0.01 vs. LPS group.

Many in vitro and in vivo studies demonstrated that inflammation play a fundamental role in the damage of articular tissues [15, 16]. The release of inflammatory mediators, such as PGE2 and NO result in destruction of the articular joint, leading to development of OA [6, 17]. Furthermore, these inflammatory mediators could induce the production of MMPs, which could induce degradation of ECM in OA articular cartilage [18]. Inhibition of these inflammatory mediators and MMPs could attenuate the development of OA [19, 20]. In the present study, we found that SSa significantly inhibited IL-1β-induced PGE2 and NO, as well as MMP1, MMP3, and MMP13 production. NF-κB is transcription factor that regulates a large body of inflammatory genes expression [10, 21, 22]. Previous study suggested that NF-κB could be used as a potential therapeutic target in OA [23]. Inhibition of NF-κB activation could attenuate pain of OA [24, 25]. In the present study, our results showed that SSa significantly inhibited IL-1β-induced NF-κB activation in chondrocytes. These results indicated that SSa inhibited IL-1β-induced inflammation in chondrocytes by inhibiting NF-κB activation.

In conclusion, in the present study, we showed that SSa significantly inhibited IL-1β-induced inflammatory response by inhibiting NF-κB activation. Furthermore, SSa has been found to up-regulate the expression of LXRα, which subsequently inhibited the activation of NF-κB. SSa may be a potential therapeutic agent for osteoarthritis.

The effects of SSa on the viability of human osteoarthritis chondrocytes were detected by MTT assay. In brief, human osteoarthritis chondrocytes were cultured in 96-well plate (5×103cells/well) for 12 h. Then, the cells were treated with different concentrations of SSa. 24 h later, the cells were incubated with MTT for 4 h and the insoluble formazan product was dissolved in DMSO. Finally, the optical density was read using a microplate reader.

The level of NO in the culture medium was detected by Griess reagent (Nanjing Jiancheng Bioengineering Institute, Jiangsu, China) according to the manufacturer’s instructions. The levels of PGE2, MMP1, MMP3, and MMP13 in the culture medium were detected by ELISA kits (R&D systems, Minneapolis, MN, USA) according to the manufacturer’s instructions.

The cells were pretreated with SSa (5, 10, 15μM) 12 h before IL-1β (10 ng/ml) treatment. 1 h later, the cells were incubated with 200 μl cell lysis buffer (Beyotime, China) for 5min and subjected to centrifugation with 12000 g/min for 10min. Protein concentration were detected by BCA method. Equal amount of proteins were separated on 12% SDS-PAGE and transferred to PVDF membranes. Then, the membranes were blocked with 3% BSA and incubated with primary antibodies and secondary antibodies. Finally, the membranes were visualized by ECL detection reagents and imaged with the Pxigel imaging system.

Chondrocytes were transfected with siRNA-LXRα (100 nM) or control siRNA (100 nM) with Lipofectamine 2000 transfection reagent (Thermo, USA) for 24 h according to the manufacturer’s instructions. Then, the cells were incubated with SSa and stimulated with IL-1β. The inhibition of siRNA on LXRα expression was detected by western blot analysis.

All the values were presented as the mean ± S.E.M. The differences between groups were analyzed using one-way ANOVA followed by post hoc analyses using the Tukey test. P <0.05 were considered to indicate statistical significance.