Insertion/deletion polymorphisms (InDels) are ubiquitous diallelic genetic markers that have drawn increasing attention from forensic researchers. Here, we investigated 30 InDel loci in Vietnamese and Nigerian populations and evaluated their usefulness in forensic genetics. The polymorphic information content of these populations ranged, respectively, from 0.164 to 0.375 and from 0.090 to 0.375 across loci. After Bonferroni correction, no significant deviation from Hardy-Weinberg equilibrium was found, except for HLD97 in the Nigerian population. The cumulative power of exclusion for all 30 loci in the Vietnamese and Nigerian populations was 0.9870 and 0.9676, respectively, indicating that this InDel set is not suitable for paternity testing in these populations, but could be included as a supplement. For the Vietnamese and the Nigerian populations, the mean observed heterozygosity was 0.5917 and 0.6268, and the combined discrimination power of the 30 loci was 0.9999999999767 and 0.9999999999603, respectively. These findings indicated that these InDels may be suitable for personal forensic identification in the studied populations. The results of DA distance, phylogenetic tree, principal component, and cluster analyses were consistent and indicated a clear pattern of regional distribution. Moreover, the Vietnamese population was shown to have close genetic relationships with the Guangdong Han and Shanghai Han populations.

Typing of short tandem repeat (STR) loci is the most effective and widely used identification method in the forensic field. The advantages of analyzing STRs are that STRs are multi-allelic, highly heterozygous, and easy to analyze [1]. However, limitations of the method are STRs’ high mutation rates and long amplicon sizes unsuitable for degraded DNA [2, 3]. In recent years, insertion/deletion polymorphisms (InDels) emerged as promising genetic markers that have attracted considerable attention in the field of forensic research. InDels are short-length diallelic polymorphisms derived from single mutations that are widely represented across the human genome. Compared with other genetic markers, InDels have prominent advantages such as lower mutation rates, small amplicon sizes, no stutter peaks, and simplicity to implement in forensic genetic laboratories [4]. Furthermore, they are suitable for biogeographical research, testing of highly degraded DNA, and can help identify the source of mutations in STR loci [5, 6].

Guangdong Province is a large economic and trade hub in China, with more than one million foreigners. Nigerians constitute the major expatriate community in Guangdong. Vietnam is adjacent to Guangxi, which enables easy migration into Guangdong for work or marriage. Consequently, a number of cases relating to these highlighted populations require forensic DNA analysis in Guangdong.

The Qiagen Investigator DIPplex kit (Qiagen, Hilden, Germany) is the first commercially available kit that allows simultaneous amplification and identification of 70–160 base pair amplicons of 30 InDels. Information on localization and motif for the 30 InDels is shown in Supplementary Table 1. This kit has been used to investigate, among others, several Asian, European, and American populations, and has been alternatively confirmed as a potential extension for STR kits, a separate and effective system for individual identification, and a supplementary kit for paternity testing [7–17]. However, to date, no investigations using this method have been performed in Vietnamese and Nigerian populations. In this study, the Qiagen Investigator DIPplex kit was used to acquire Vietnamese and Nigerian population data, evaluate the forensic value of 30 InDels, and analyze genetic differences between the studied populations and other reported populations.

Linkage disequilibrium (LD) was analyzed by SNP Analyzer v2.0 for each population separately, and the results are shown in Figure 3. The intensity of the red color in the plot determines the strength of linkage between loci. Positive linkage, represented by a thick black line, was absent among the 30 InDel loci within the two study populations. Moreover, the level of LD between the 30 InDel loci was estimated using r2 and tested by the SNPAnalyzer program. The r2 values of all loci were less than 0.2, indicating that subsequent analyses should treat the 30 InDels as independent loci in these two populations. 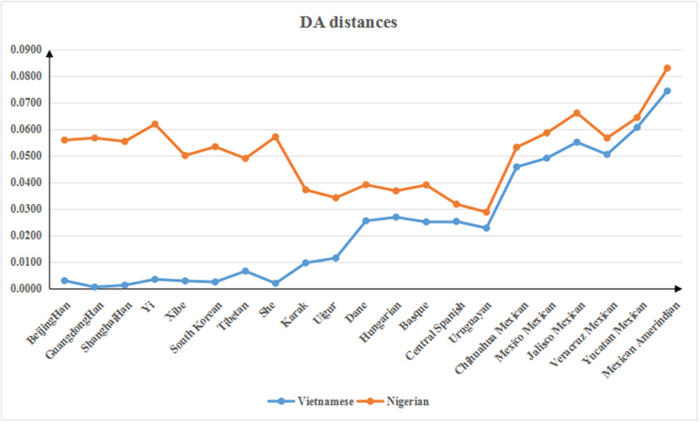 Figure 4: Genetic distances among the Vietnamese and Nigerian populations and 21 reference populations. 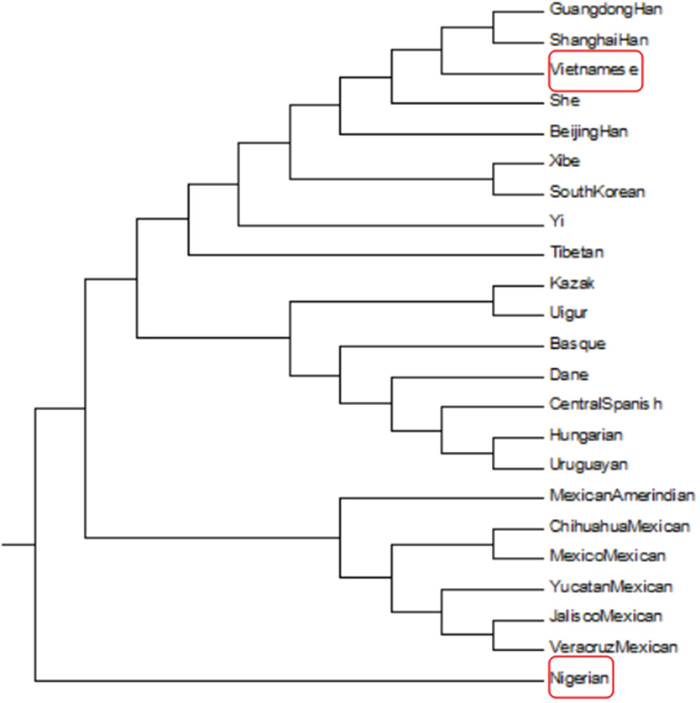 Principal component analysis (PCA) was conducted by MATLAB 2007a based on allele frequencies of our Vietnamese and Nigerian populations, as well as 21 other reference population groups. As shown in Figure 6, the results revealed a clear regional distribution pattern. Nine East Asian groups, including the Vietnamese, were located on the right of the chart, while the Kazak and the Uighur were located centrally. Four European groups were located on the upper left quadrant and close to the Uruguayan group. The lower left quadrant included the 6 North American groups as well as the Nigerian group, which was located further to the left. Here again, the Vietnamese population’s closest relationships were with the Guangdong Han and Shanghai Han populations. Thus, PCA results were in accordance with phylogenetic tree results. 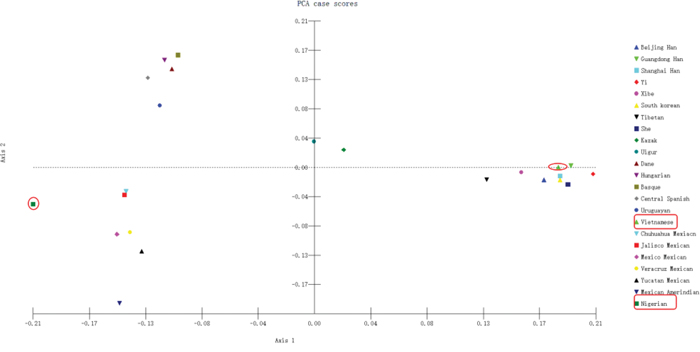 Figure 6: PCA based on 30 InDel loci in the Vietnamese and Nigerian populations and 21 reference populations. 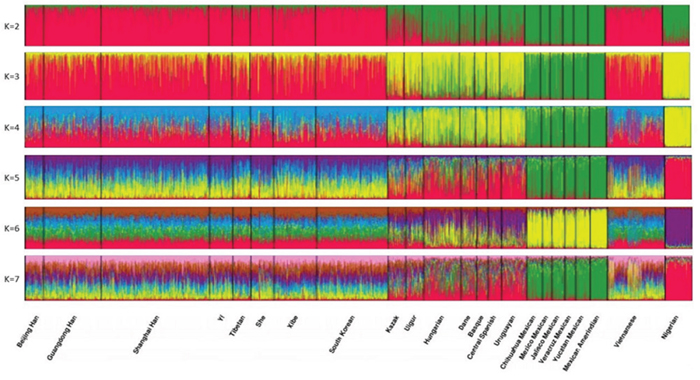 Bloodstain samples were collected from 300 unrelated Vietnamese and 140 unrelated Nigerian individuals. All study participants had recently resided in China, were older than 20 years of age, and both their parents and grandparents were of specific aboriginal descent. Before inclusion in the study, all participants gave full informed consent. The Chelex-100 method was employed to extract template DNA from the samples, following the procedure described by Walsh et al. [20].

The study analyzed DNA polymorphisms in accordance with the recommendations of the International Society for Forensic Genetics (ISFG), as described by Schneider [21].

We report here, for the first time, the forensic efficiency and genetic variation of 30 InDels in Vietnamese and Nigerian populations. Although these InDels showed great potential for forensic personal identification in those populations, we conclude that they could only be used as a useful supplement to routine STR detection for paternity testing. Analyses of DA distance, phylogenetic tree, and population principal component were consistent and showed a clear regional distribution of the studied populations. Furthermore, close genetic relationships were identified between the Vietnamese and Guangdong Han and Shanghai Han populations, whereas distant relationships were identified between the Nigerian the other populations analyzed.

This work was supported by a grant from Undergraduate Training Programs for Innovation and Entrepreneurship in Guangdong (Grant No. 201612121083), Science and Technology Planning Project of Guangdong Province, China (Grant No.2013B021500010), Medical Science and Technology Research Foundation of Guangdong Province (A2015043), and Open project of Key Laboratory of Forensic Genetics, Ministry of Public Security (2015FGKFKT03), Beijing, China.