Purpose: To investigate whether FGFR1 gene amplification is associated with clinicopathologic characteristics and its potential impact on survival in patients with resected esophageal squamous cell carcinoma (ESCC).

Conclusion: FGFR1 amplification is an independent adverse prognostic factor in surgically resected ESCC. FGFR1 may be a promising therapeutic target in patients with ESCC.

Esophageal cancer is one of the most aggressive malignancies [1, 2]. Esophageal squamous cell carcinoma (ESCC), the predominant histological type in east Asia, is considered as an environmental malignancy attributable to tobacco smoking and alcohol intake [3]. In contrast, esophageal adenocarcinoma (EAC) is associated with Barrett’s esophagus, and mainly affects Caucasian population [4]. The two main subtypes of esophageal cancer have considerably different epidemiological features but share the same dismal prognosis despite recent advances in imaging and surgical techniques [5].

Over the last decade, molecularly stratified therapy have afforded benefits to patients with many types of cancer but, unfortunately, the same is not true for ESCC [6]. Many genomic abnormalities have been described in ESCC and there is growing evidence of their biological significance [7, 8]. Further delineation of genetic alterations may help uncover aberrant molecular pathways, novel biologic markers and tumorigenic pathways, and eventually allowing successful targeted therapy. Fibroblast growth factor receptor 1 (FGFR1), whose gene is located at 8p12, is a member of the FGFR family of receptor tyrosine kinases (FGFR1-4). FGFRs activation leads to downstream signaling via the PI3K/AKT/RAS/MAPK pathways, which are essential to cell growth, survival, migration, and angiogenesis. FGFR1 amplification has been identified in breast cancer, head and neck squamous cell carcinoma, ovarian cancer, ESCC, bladder cancer and lung cancer [9–12]. Existing studies on the prognostic impact of FGFR1 amplification for ESCC have yielded conflicting results. Loga et al. investigated the prevalence of FGFR1 amplification in a tissue microarray containing 346 esophageal adenocarcinomas and 254 ESCCs using dual-labeling fluorescent in situ hybridization (FISH) analysis and found that FGFR1 amplification correlated with the histologic subtype of ESCC (9.4% vs. esophageal adenocarcinoma 1.6%, P<0.001) [13]. However, they failed to demonstrate an association between FGFR1 amplification and clinical outcome. Kwon et al. studied 180 patients with resected ESCC and found FGFR1 amplification in 21.4% (37/173) patients; they observed that FGFR1 amplification was an independent predictor of prolonged OS in these patients [14]. Kim et al. investigated 526 curatively resected ESCC using FISH for FGFR1 amplification and found that an association between high FGFR1 amplification (defined as an FGFR1/centromer 8 ratio ≥ 2.0, or average number of FGFR1 signals/tumor cell nucleus ≥ 6.0, or percentage of tumor cells containing ≥ 15 FGFR1 signals or large cluster in ≥ 10% with significantly shorter disease-free survival (DFS) and OS [15]. FGFR1 inhibition in cell lines and mouse models with FGFR1-amplified engrafted tumors suppressed tumor cell growth and induced apoptosis, suggesting that FGFR inhibitors may be an effective therapeutic option in SCCs with FGFR1 amplification [11, 16, 17]. Furthermore, FGFR1 inhibitors (e.g. dovitinib) have entered early stage clinical trials in patients with solid tumors [18, 19].

A total of 687 patients underwent radical resection for ESCC during the study period. 556 cases with undisputable survival data were included in data analysis in the current study (Figure 1). The demographic and baseline characteristics of the study participants are shown in Table 1. The median age of the patients was 63 years (range 39-80 years) and the majority of them (86.2%) were men. The patients had predominantly stage II (58.3%) or III (21.4%) tumors. Slightly more than half of the patients (57.4%) were current smokers and the majority of the patients were moderate (27.3%) or heavy drinkers (48.4%). 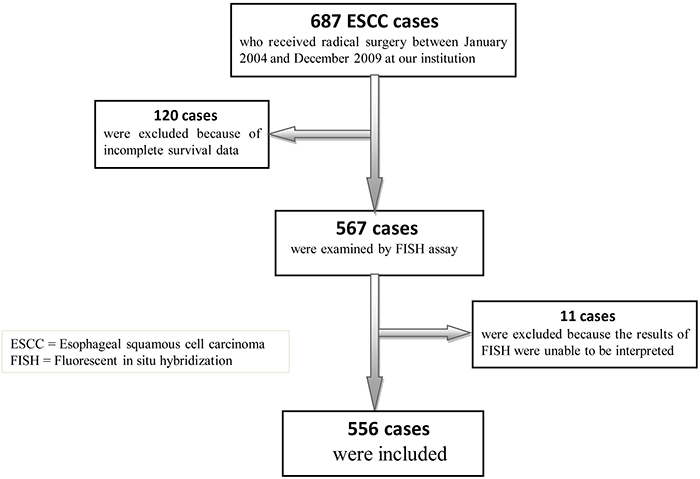 Figure 1: Flowchart of the current study. 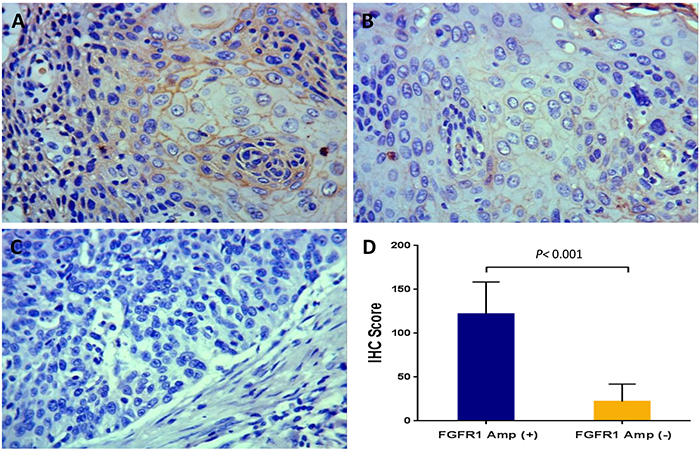 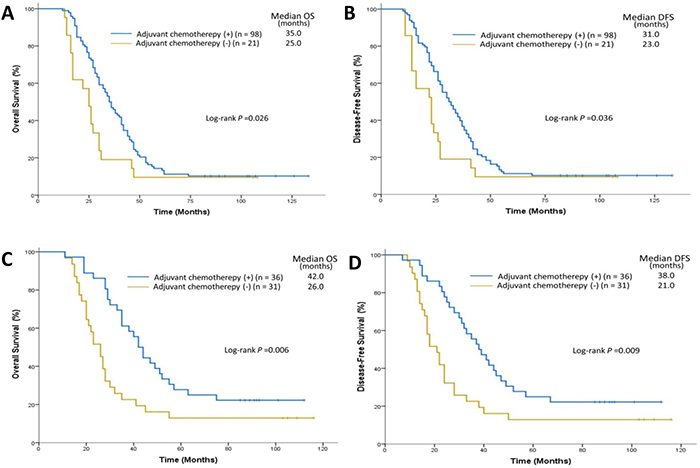 Figure 6: The incidence of FGFR1 amplification according to (A) drinking pattern and (B) alcohol dosage. P value was tested by χ2 test for linear trend.

FGFR1 amplification status has been investigated in several previous studies using different approaches such as comparative genomic hybridization, single nucleotide polymorphism array, and FISH assay [20–23]. Unlike EGFR mutation in lung cancer, which is more prevalent in Asians than in Caucasians, the frequency of FGFR1 amplification in ESCC does not seem to be widely different by ethnicity. The frequency of FGFR1 amplification, as detected by FISH analysis in our cohort, was 12.1%, which was higher than 9.4% reported by Loga et al. for a Caucasian ESCC patients cohort, [13] but lower than 21.4% for a small Korean cohort reported by Kwon et al [14].

The genomic landscape of ESCC is highly complex [29]. Delineation of aberrant signaling pathways in ESCC has identified candidate molecular targets such as HER2, EGFR, VEGF, FGFR and PI3K. However, lack of reliable prognostic predictors hampers development of targeted therapies for ESCC. Our study has demonstrated that FGFR1 amplification is an independent adverse predictor of OS of ESCC patients, suggesting that FGFR1 may be a promising molecular therapeutic target [30]. Defining therapeutic targets for subgroups of ESCC patients is critical to advancing treatment of this disease. Currently, FGFR1 amplification may define one large subgroup, and efforts to target this population are already ongoing with some clinical trials already in progress. FGFR1 inhibitors that are currently in clinical development are shown in Supplementary Table 2. Dovitinib, a potent FGFR inhibitor, has demonstrated antitumor activity in heavily pretreated patients with FGFR pathway-amplified breast cancer but has not been studied in clinical trials for ESCC patients [31].

The main limitations of this study reside in its retrospective nature and the fact that patients were selected from a single tertiary care institution. Also, clinical decisions were not likely uniform in such retrospective study, and could have produced biases. Future studies are required to validate our findings in an independent cohort, especially in a Caucasian population.

We retrospectively analyzed the clinicopathologic data of patients with pathologically proven primary thoracic ESCC who received radical resection of curative intent at Shandong Provincial Hospital affiliated to Shandong University, Jinan, China, between January 2004 and December 2009. Patients with incomplete survival data were excluded. Archived tumor specimens were obtained from the Tissue Bank of Shandong Provincial Hospital. ESCC was staged according to the American Joint Committee on Cancer (seventh edition) guidelines.

The study protocol was approved by the Ethics Committee of Shandong Provincial Hospital. Patient consent was not required because of the retrospective nature of this study. Acquisition of tissue specimens was approved by the Shandong Provincial Hospital Ethics Committee and performed in accordance with the established institutional and state guidelines.

We retrieved data, including age, gender, co-morbidities, smoking and drinking status, TNM stage, OS and DFS, from the medical records of eligible patients. Never-smokers were defined as those smoking fewer than 100 cigarettes in lifetime; former smokers were those who had stopped smoking for more than one year, and current smokers were those who currently smoke or quit smoking for less than one year [37]. Alcohol intake was categorized into light drinker (0-15g/day), moderate drinker (15.1-30g/day) and heavy drinker (>30 g/day) [38]. Diabetes was defined as fasting blood glucose ≥ 7.0 mmol/L or 2-hour plasma glucose ≥ 11.1 mmol/L or previously diagnosed diabetes. Hypertension was defined as seated resting systolic blood pressure ≥ 140 mmHg or diastolic blood pressure ≥ 90 mmHg, or taking an anti-hypertensive medication [39].

Paraffin-embedded tumor specimens were used to construct a tissue microarray with 2-mm-diameter cores. Two pathologists (Y.J.Q. and Q.X.W.) confirmed the diagnosis of ESCC by hematoxylin and eosin (H&E) staining. FISH assay was performed on the tissue microarrays by using a ZytoLight SPEC FGFR1/CEN 8 Dual Color Probe (ZytoVision, Bremerhaven, Germany) according to the manufacturer’s recommended protocol. All samples were independently analyzed by two evaluators (Y.J.Q. and Q.X.W.) who were blinded to clinical data using a fluorescence microscope (DM4000, Leica). At least 100 nuclei per sample were evaluated. FGFR1 amplification cases were defined as harboring a gene copy number ≥ 6 or FGFR1/CEN 8 ratio ≥ 2.2 [40]. Images were produced using the AxioCamMRm CCD camera and Axiovision v4.5 software suite.

Immunohistochemical analysis was performed using anti-FGFR1 antibody (GTX100264, GeneTex, U.S.A.) following conventional methods. FGFR1 expression levels were scored semi-quantitatively independently by two pathologists (Y.J.Q. and Q.X.W.) who were blinded to patient information. Only clear membranous staining of tumor cells was considered to be positive; cytoplasmic or granular staining was considered negative or trace. The percentage of positive tumor cells per core (0% to 100%) was multiplied by the dominant staining pattern (1, negative or trace; 2, weak; 3, moderate; 4, intense). The overall score theoretically ranged from 0 to 400 [41]. The cutoff value for IHC scores was determined using the X-tile software (version 3.6.1) to stratify ESCC patients into the high and low FGFR1 expression groups [42]. Cases with discordant results underwent a consensus review by a third pathologist (Z.G.Y.).

Patient demographic and baseline characteristics are expressed as mean (SD) or percentage (%) and compared using Student’s t-test and χ2 test, where appropriate. The primary end point of OS and secondary end point of DFS are presented as median and 95% confidence interval (95%CI), and analyzed using the Kaplan-Meier method, followed by log rank test. Statistical significance was set at P<0.05. All statistical analyses were performed by using SPSS 19.0 software.

The authors thank the Department of Pathology, Shandong Provincial Hospital Affiliated to Shandong University, for specimen collections and staining evaluation.

This work was supported by the National Natural Science Foundation of China (No. 81172161).