Thyroid cancer has many histological subtypes; the most common of which are papillary thyroid cancer (PTC) and follicular thyroid cancer (FTC). Although many studies have focused on the morphological and clinicopathological risks as well as prognosis of PTC and FTC [2–9], mixed subtype thyroid cancer (MSTC), that is, adenocarcinoma combined with other types of carcinoma in the thyroid have rarely been investigated.

The Surveillance, Epidemiology, and End Results (SEER) Program has been established by the National Cancer Institute and is supported by the Surveillance Research Program to reduce the cancer burden, including that of thyroid cancer, among the US population. The SEER is a premier source of cancer surveillance data as well as analytical tools and is a leader in methodological expertise in collecting, analyzing, interpreting, and disseminating reliable population-based statistics.

In this study, we investigated the prognosis, that is, cancer-specific mortality and all-cause mortality, of MSTC compared with PTC and FTC using propensity score matching based on the SEER database. Our finding would provide a reference for further understanding and treatment of MSTC.

This study assessed data from 98888 patients with thyroid cancer to analyze the prognosis of MSTC. Of these patients, 92963 had PTC, 5865 had FTC, and 60 had MSTC. The mean age and follow-up duration according to different histological subtypes are shown in Table 1. No significant differences were noted in terms of the age between patients with MSTC and those with PTC or FTC.

Table 2: Hazard Ratios of different histological types for the cancer specific deaths and all cause deaths of thyroid cancer 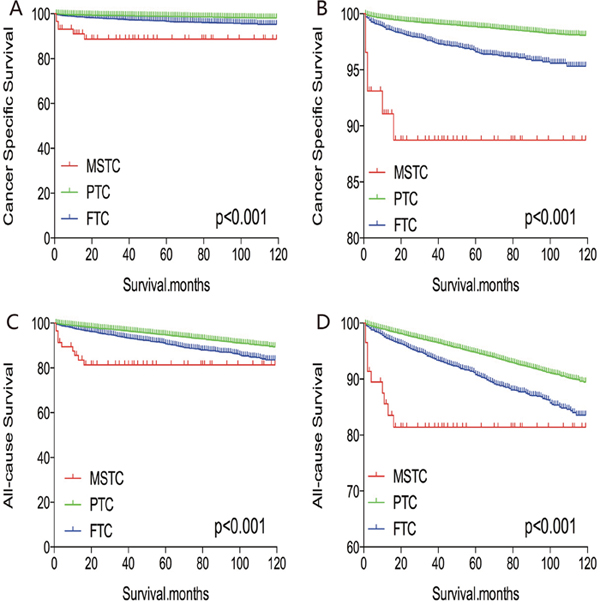 Figure 1: Kaplan Meier curves among patients stratified by subtype for cancer-specific mortality (A, B) and all-cause mortality (C, D).

Figure 2: Kaplan Meier curves of cancer-specific mortality for matched subtype pairs. Age, sex and race matching between MSTC and PTC (A), MSTC and FTC (B).

Figure 5: Kaplan Meier curves of all-cause mortality for matched Subtype pairs. Age, sex and race matching between MSTC and PTC (A), MSTC and FTC (B).

The histogenetic and pathogenetic origin of MSTC has been a topic of interest and has remained controversial. Volante et al. suggested “the hostage hypothesis” that stipulates that MSTC originate from different cells [10]. In their study, they suggested that MSTC are not derived from a single stem cell because the clonality analysis shows that different subtypes exhibit different patterns of molecular mutations and X-chromosomal inactivation.

In addition, whether MSTC has unique biologic behaviors compared with other subtypes is still unclear. Currently, only few investigations focus on the prognosis of MSTC [10-12]. Furthermore, the discussion of the American Thyroid Committee guideline on the biological behavior, molecular features, and prognosis of MSTC is limited.

In our study, analysis results of information obtained from the SEER database showed that histological subtype was not an independent factor for cancer-specific and all-cause mortality rates of MSTC. Before matching risk factors, MSTC had worse cancer-specific and all-cause mortality compared with PTC and FTC. However, after matching for all influencing factors, including radiation treatment, MSTC had similar prognosis to PTC and FTC. These results indicate that if patients with MSTC had similar demographic features, clinicopathological factors, and radiation treatment with those of patients with PTC and FTC, the survival rate would not be significantly different. Such results would be helpful for clinicians during the decision-making process.

One dilemma of MSTC is the diagnosis by fine-needle aspiration cytology. For example, mixed medullary-follicular thyroid carcinoma characterized by coexistence of morphological features of both follicular thyroid cancer and medullary thyroid cancer. It is difficult to identify without immunocytochemical examinations. When fine-needle aspiration cytology is preferred to diagnose such malignancy, adequate specimen and determination of serum calcitonin and thyroglobulin levels would be help for establishing an accurate diagnosis [13-17].

Notably, whether the type of treatment, including surgical approaches and radiation, affects the prognosis of MSTC still lacks adequate evidence [10-12, 17-20]. In our study, radiation was more frequently performed in patients with MSTC (61.7%) than in patients with PTC (48.5%). Moreover, MSTC patients (86.2%) were more likely to undergo total thyroidectomy than patients with PTC (82.1%) and FTC (70.9%). Therefore, the similar cancer-specific mortality of MSTC to PTC and FTC after matching for treatment approaches may suggest that patients with MSTC require aggressive treatment. It means that the difference of cancer-specific mortality between MSTC and PTC, FTC was shrink down may due to the aggressive treatment of MSTC.

Our study has some limitations. First, the lack of information on recurrence may cause overestimation bias when evaluating cancer-specific and all-cause mortality. Furthermore, we cannot differentiate the specific subtypes. Clonality analysis of mixed type thyroid cancer was also not performed; thus, analysis for each type compared with PTC and FTC separately could not be performed. In addition, BRAF mutation, TERT promoter mutation, and other molecular markers were not investigated in our study or matched for analysis.

In conclusion, we have shown the prognosis of MSTC compared with PTC and FTC. Our result would be beneficial for developing a personalize and accurate treatment guideline and understanding of MSTC.

This study’s retrospective protocol was approved by Union hospital’s ethical review board and complied with the ethical standards of the Declaration of Helsinki, as well as the relevant national and international guidelines.

The quantitative variables were expressed as mean ± standard deviation (SD), while the categorical ones were presented as percentages. Patient survival curves for thyroid cancer-specific mortality and all-cause mortality were examined by Kaplan-Meier analyses with the log-rank test. Cox proportional hazard regression analyses were using to estimate hazard ratios and 95% CIs, in order to quantify the effects of the different histological subtypes on cancer-specific and all-cause mortality. PSM was also used to further adjust for potential baseline confounding factors. All p-values were 2-sided, and p-values < .05 were considered significant. Analyses were performed using SPSS version 23.0, Stata/SE version 12 (Stata Corp.), and GraphPad Prism version 6 (GraphPad Software Inc.).