Schizophrenia is a complex, severe, chronic psychiatric disorder with a heterogeneous clinical phenotype [1]. The prevalence of schizophrenia is approximately 1.1% of the population over the age of 18, and 25 million people worldwide are currently affected by this disorder [2]. However, at present, schizophrenia is primarily diagnosed using criterion-based approaches, such as the criteria from the International Classification of Diseases, Tenth Edition (ICD-10), and the Diagnostic and Statistical Manual of Mental Disorders, Fifth Edition (DSM-V) [3]. Biomarkers for the diagnosis, prognosis or therapeutic efficacy of schizophrenia are currently being examined extensively.

Many efforts have been made to investigate the etiology of this disease, including studies focused on genetics, early environmental factors, psychology and neurobiology [4–7]. Gene–environmental interactions have been found to play a crucial role in the development of schizophrenia [8, 9]. Considering these various factors, the development of genomics and molecular biology improved the understanding of the molecular pathophysiology of schizophrenia, especially the related neuronal signaling pathways and the influences of antipsychotic drugs on them [10–13].

The phosphoinositide-3 kinase - protein kinase B (PI3K-Akt) pathway is an important downstream intracellular pathway of DRD2, which is associated with the function and development of central nervous system and the pathophysiology of schizophrenia [10–15]. PI3K-Akt pathway is also the intracellular downstream pathway of glutamate, serotonin, dysbindin, disrupted in schizophrenia-1 (DISC-1), and neuregulin 1 (NRG1), which are all the targets for mood stabilizers and antipsychotic drugs [10, 15, 16]. Almost all aspects of the cell developments, such as growth, proliferation, metabolism and apoptosis, were modulated by PI3K-Akt pathway. Reduced PI3K/Akt activity destroys schwann cells and oligodendrocytes, damages axonal guidance and cell–cell interactions, and reduces synaptic number, which may all lead to schizophrenia [16, 17]. Dysregulation of PI3K-AKT signaling cascade could critically disturb the neurodevelopmental process via genetic and environmental risk, and has been regarded as a root cause of several neurodevelopmental diseases, including schizophrenia [18]. The murine model of Akt3 genetic deficiency exhibited selective deficits of temporal order discrimination and spatial memory, tasks critically dependent on intact prefrontal-hippocampal circuitry, which related to schizophrenia [19]. Double deficiency of Akt1 and Nrg1 can result in the impairment of social cognitive functions, which might be pertinent to the pathogenesis of schizophrenia-related social cognition which related to schizophrenia [20].

According to recent researches, DRD2-PI3K-AKT pathway could have at least three intracellular downstream segments, which play important roles in cell growth and proliferation [21, 22]. Firstly, AKT could induce the inactivation of forkhead family of transcriptional regulators (FOXOs) by promoting the phosphorylation of them. And FOXOs could contribute to neural stem cell renewal and proliferation [23–25] and also have prominent roles in the development of neuronal circuits [26]. Secondly, AKT could also induce mammalian target of rapamycin (mTOR) to be phosphorylated. mTORs could regulate intracellular protein synthesis, synaptic plasticity, neuronal morphology, and the pathophysiology of schizophrenia [27]. Thirdly, a multifunctional serine/threonine kinase, glycogen synthase kinase-3 (GSK-3) also could be inactivated by AKT. GSK-3 can regulate a series of neuron response, such as microtubule dynamics [28].

Comparisons of the DRD2, AKT1, and PI3KCB expression levels between the two groups 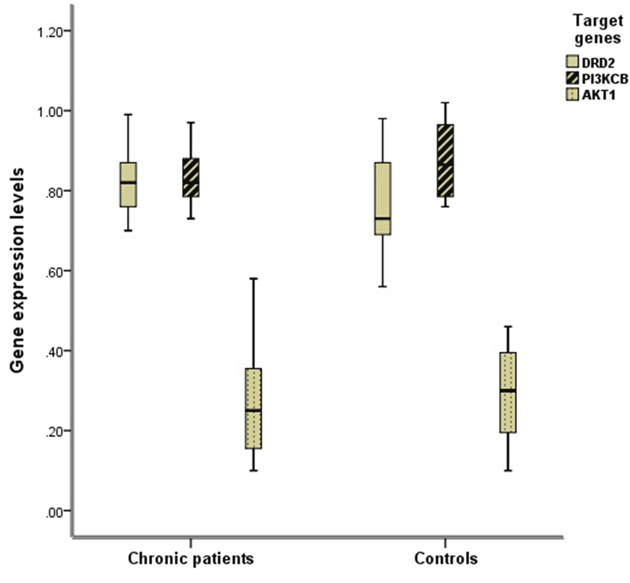 Table 1: Comparison of the expression levels of DRD2, AKT1 and PI3KCB between two groups (means±S.D.)

The mRNA expression levels of DRD2, AKT1, and PI3KCB in PBLs were normalized respectively by the ratio of their CT values and that of GAPDH as internal housekeeping gene. The independent-samples T test was used. * p<0.05. 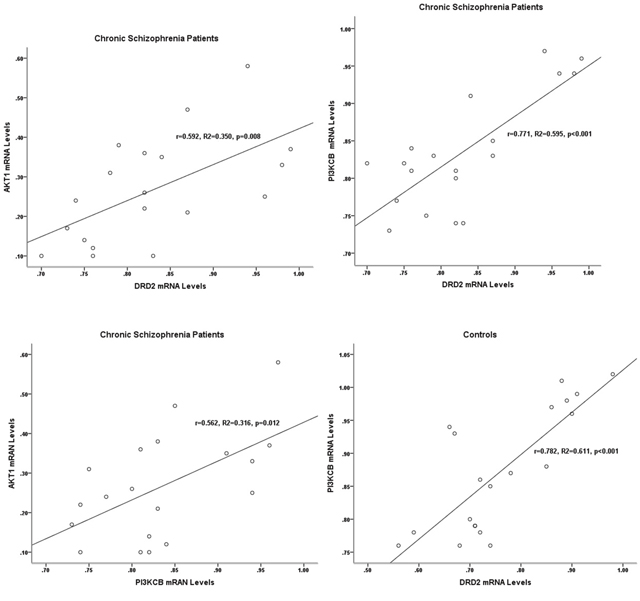 Table 2: Correlations between the mRNA levels of DRD2, AKT1, and PI3KCB (R-values) 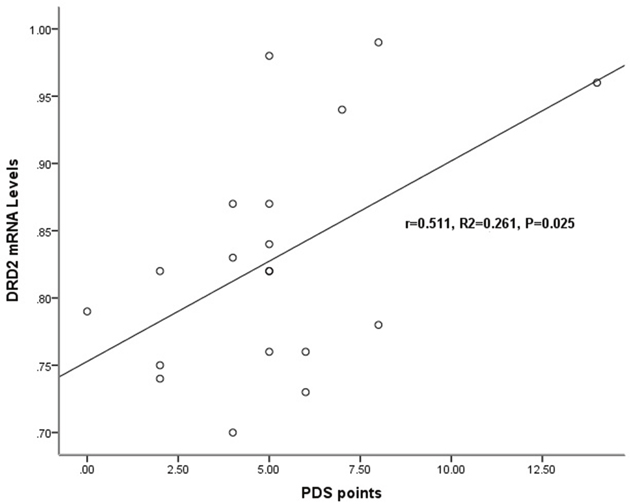 Table 3: Relationships between the expression levels of DRD2, AKT1, and PI3KCB and the PANSS scores of chronic schizophrenia patients (R-values)

These inconsistent results of mRNA expression levels of DRD2, PI3KCB and AKT1 may have been obtained because in contrast to the above studies, firstly, our samples were collected from chronic schizophrenia patients receiving long-term treatment with single clozapine. The deficit syndromes of chronic schizophrenia patients and the pharmacological effects of clozapine might have influenced the examined mRNA levels. Secondly, the expression level of DRD2, PI3KCB, and AKT1 in peripheral blood may not an index of schizophrenia, but only an index of psychiatric symptoms.

With regard to the correlations between the mRNA levels of DRD2, AKT1, and PI3KCB, significant correlations were detected between the mRNA levels of AKT1 and DRD2, AKT1 and PI3KCB, DRD2 and PI3KCB in chronic schizophrenia patients. In healthy controls, the only statistical correlation was observed between the mRNA levels of PI3KCB and DRD2. PI3K-Akt pathway was the non-classical downstream signaling pathway of DRD2. And the combination of DA and DRD2 receptor leads serially to the activation of PI3K and the dephosphorylation and inactivation of AKT [14, 15]. In chronic schizophrenia patients receiving long-term clozapine treatment, the pharmacological effects of clozapine might influence the functional status of the DRD2-PI3K-Akt signaling cascade. Studies have shown the superiority of clozapine to typical agents for treating the negative symptoms and positive symptoms of schizophrenia [51]. The time lag between the start of treatment and the therapeutic effect of antipsychotic agents suggests that changes in gene expression contribute to their efficacy [52–55].

This research also had some limitations. Firstly, the small sample size was the major limitation of this study, which may have led to insufficient statistical power to detect some slight difference. Secondly, the chronic schizophrenia patients were monotherapied with clozapine for more than 6 months before recuited in the study, but we did not limit the antipsychotic drugs which might be used before that. So, the possible long-term effects of antipsychotic drugs ever used were not considered. Thirdly, there are evident limitations of using peripheral blood to explore a central nervous system disease, but researches of postmortem brain samples circumvent the corresponding confounding factors, such as effects of long-term hospitalization and lifetime exposure to antipsychotic drugs [61, 62]. The researches of peripheral mRNA expression could provide a chance to understand the gene expression profile of central nervous system because, the gene expression levels of many kinds of biologically substances display the similar gene expression patterns in peripheral blood and prefrontal cortical tissue [50, 61, 62].

In conclusion, a correlation was observed between increased deficit syndrome severity and elevated DRD2 expression levels in PBLs of chronic schizophrenia patients receiving long-term clozapine treatment. However, considering the limited in vivo evidence concerning the proteins phosphorylation levels which related to the functional status of PI3K-Akt pathway and the understanding that PI3K-Akt pathway is activated by several different regulatory mechanisms to exert its biological effects [63], the alterations in the DRD2-PI3K-Akt pathway have not been fully elucidated as biological markers of schizophrenia.

All subjects were Han Chinese, who had no previous history of drug abuse, nervous system disease and immune disease. The health controls group had no history in neuropsychology. The female subjects were not in lactating, menstruating or pregnant stage when recruited. There was no significant difference in gender and age between two groups. Their demographic and clinical characteristics are shown in Table 4.

Table 4: Demographic and clinical characteristics of the subjects

The psychotic symptoms of the patients were quantified with PANSS by one rater just in the same day when the blood samples were drawn. Then the deficit syndrome of schizophrenia was evaluated by the PDS calculated with PANSS items which was mentioned previously in the introduction.

The research is based on the principles described in the Helsinki declaration. The research was approved by the ethics committee of the Wuxi mental health center. Before the research, all the participants were informed the procedures and corresponding rights. And every subject or major legal guardian, in case the decision-making ability of participant was limited, had signed the informed consents.

Each subject was drawn 2 ml of fasting ulnar vein blood in vacutainer tube with heparin. Total ribonucleic acid (RNA) of each sample was extracted with QIAamp RNA Blood Mini Kit (Qiagen Co., Germany) contained DNase processing steps. The absorbance of RNA samples were examined to conduct the quality check using Bioanalyzer 2100 System, Agilent. The RNA integrity numbers (RIN) of RNA samples were 8.21±0.36, and the 28S/18S ratios were 1.88±0.45, which all displayed the good integrity.

RNA extraction and reverse transcription were conducted in 3 hours after drawing blood samples in order to reduce the RNA degradation. To minimize batch effects, the fasting blood sample was consistently drawn at 6:00 am, and RNA extraction and reverse transcription were performed by the same laboratory technician utilizing identical experimental procedures.

To conduct real-time PCR reaction, QuantiFast Probe PCR Kit (Qiagen Co., Germany) and QuantiFast Probe Assays (Qiagen Co., Germany) were used in ABI Prism 7500 PCR instrument (ABI Co., USA). The probe assays were prefabricated with probes and primers for glyceraldehyde-3-phosphate dehydrogenase (GAPDH) as internal control, including probes and primers of Hs_AKT1P_QF_1 assay (QF00525315) for AKT1, Hs_PI3KCB_QF_1 assay (QF00069097) for PI3KCB, and Hs_DRD2_QF_1 assay (QF00103047) for DRD2. The volume of each reaction system was up to 25 μl with the reaction conditions as pre-denaturing at 95°C for 5 min, then 40 cycles of denaturing at 95°C for 30 s and annealing at 60°C for 30 s. Each sample was conducted 3 parallel reactions in order to calculate the average CT value. 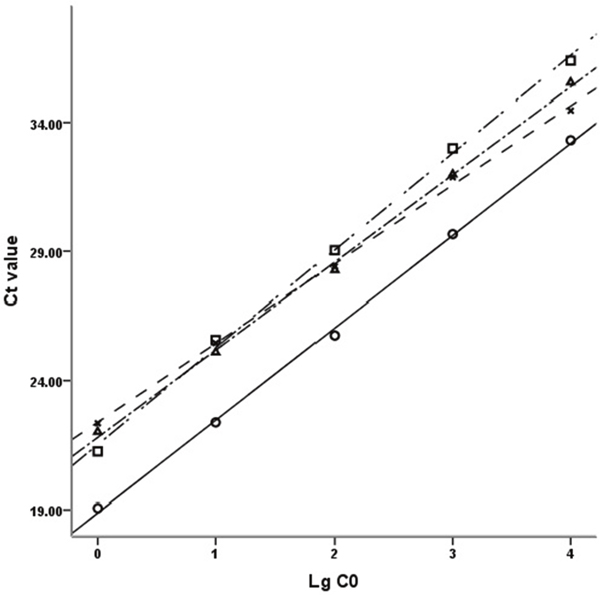 The authors thank the patients, their families and the healthy volunteers for their participation, and the physicians who helped us to take clinical data and blood samples in Wuxi Mental Health Center and Wuxi Tongren International Rehabilitation Hospital, Nanjing Medical University.

14. Beaulieu JM. A role for Akt and glycogen synthase kinase-3 as integrators of dopamine and serotonin neurotransmission in mental health. J Psychiatry Neurosci. 2012;37:7-16.

41. Kordi-Tamandani DM, Sahranavard R, Torkamanzehi A. Analysis of association between dopamine receptor genes' methylation and their expression profile with the risk of schizophrenia. Psychiatr Genet. 2013;23:183-187.