Long non-coding RNAs (lncRNAs) are longer than 200 nucleotides with no protein-coding or limited capacity [12–15]. Increasing studies have suggested that lncRNAs can server crucial roles in cell development, proliferation, differentiation, migration and invasion [16–20]. Recent evidences have demonstrated that lncRNAs are upregulated or downregulated in neuropathic pain models, which support the potential role of lncRNAs as a novel group of targets for the treatment of neuropathic pain [21–23]. Colon cancer associated transcript-1 (CCAT1) was a novel lncRNA which was demonstrated to be upregulated in the colon cancer and gastric cancer [24]. LncRNA CCAT1 plays important roles in the proliferation, migration and invasion. However, the role of CCAT1 was still uncoverd in the developmen of neuropathic pain.

In our study, we found that CCAT1 expression was decreased in the spinal dorsal horn, DRG, hippocampus, and ACC of rats with bCCI injuries. LncRNA CCAT1 overexpression could alleviate the pain thresholds partly through regulating miR-155/SGK3 expression.

Figure 1: Mechanical sensitivity threshold of the model rats. (A) Left hindpaw; (B) Right hindpaw. Rats submitted to sciatic ligation developed tactile stimulus-induced hypersensitivity at 7th and 14th day postsurgery, whereas sham-operated and naive rats had no change in their sensitivity. **p<0.01 and ***p<0.001.

CCAT1 expression was downregulated in the bCCI model 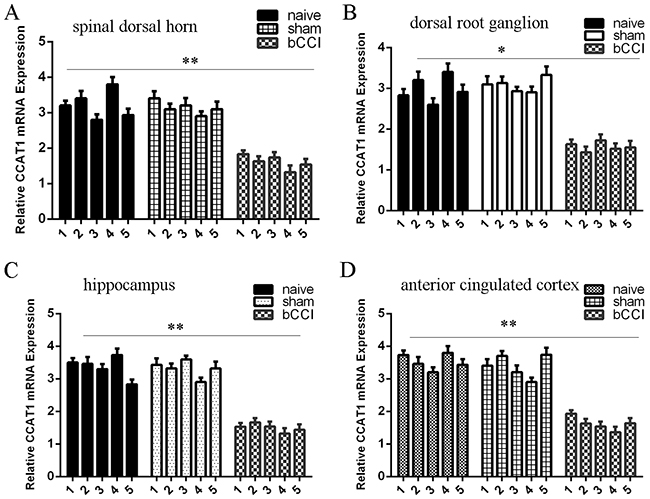 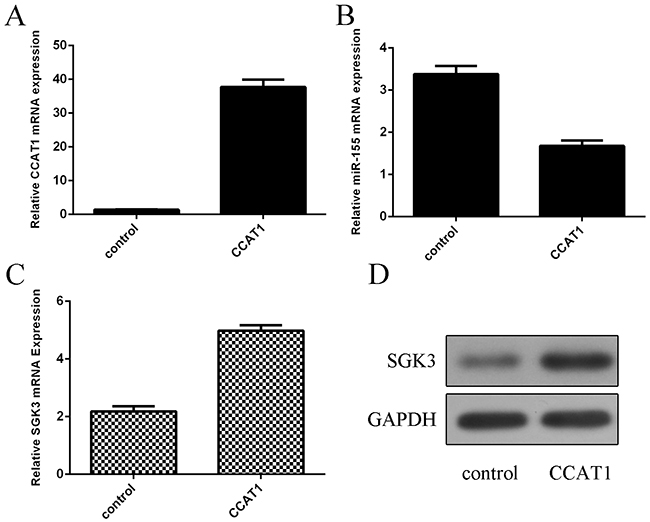 MiR-155 expression was upregulated in the bCCI model

Next, we determined miR-155 and SGK3 expression in the different regions of the rat nervous system. We found that miR-155 expression level was upregulated in the spinal dorsal horn (Figure 5A), DRG (Figure 5B), hippocampus (Figure 5C), and ACC (Figure 5D) compared to sham-operated and nave group rats. 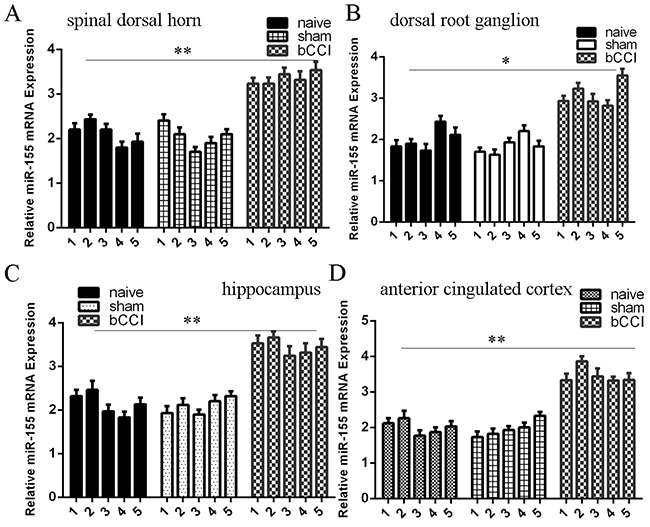 SGK3 expression was downregulated in the bCCI model 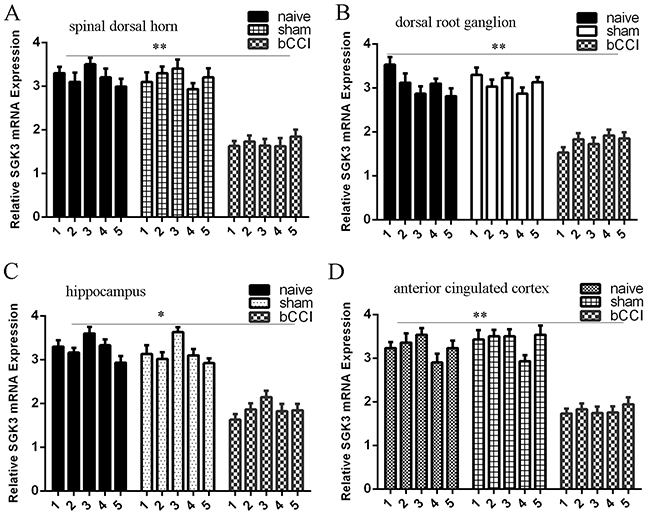 Functional analysis of CCAT1 in the neuropathic pain model

To determined the role of SGK3 in the mechanism of CCAT1 in neuropathic pain model. si-SGK was transfected into the neuropathic pain model. Compared to the controls, inhibition of SGK3 expression decreased the pain threshold and cold allodynia effect of CCAT1 overexpression treated bCCI rats, indicating that CCAT1 could lighten pain threshold and cold allodynia through enhancing SGK3 expression (Figure 8A and 8B).

Previous studies suggested that lncRNAs played important roles in the development of neuropathic pain [2, 22, 28, 29]. For example, Wang et al [30]. showed LncRNA uc.48+ was involved in the diabetic neuropathic pain regulated by the P2X3 receptor in dorsal root ganglia. Peng et al [28]. showed that lncRNA NONRATT021972 expression was upregulated in the Type 2 diabetes mellitus (T2DM) rat model. The expression of NONRATT021972 in the T2DM patient serum was also upregulated compared to the healthy subjects. Inhibition of NONRATT021972 can decrease the hyperalgesia potentiated by the TNF-α in T2DM rats. Liu et al [31]. demonstrated that the expression of NONRATT021972 was upregulated in the DRG of diabetes mellitus (DM) rats and NONRATT021972 siRNA could promoted the thermal withdrawal latency, the sensory nerve conduction velocity and mechanical withdrawal threshold of rat tail nerves. In our study, we indicated that lncRNA CCAT1 expression was decreased in the spinal dorsal horn, DRG, hippocampus, and ACC of rats with bCCI injuries. Moreover, lncRNA CCAT1 overexpression could alleviate the pain thresholds.

In conclusion, our data revealed that lncRNA CCAT1 expression was significantly decreased in the spinal dorsal horn DRG, hippocampus, and ACC of bCCI rats. LncRNA CCAT1 overexpression could alleviate the pain thresholds partly through regulating SGK3 expression. These results suggested that lncRNA CCAT1 played crucial roles in the development of neuropathic pain.

Our study were approved by the Animal Care and Committee of Henan Provincial People's Hospital and used in the accordance with the guideline of International Association for the Study of Pain. Thirty-five clean adult female Spragure-Dawley (SD) rats were randomly divided into three groups (bCCI, sham, and naive) and hosed at the climate-controlled room under a 12/12 hours light/dark cycle with cycle with free access to water and food. Bilateral chronic constriction injury (bCCI) model was created for neuropathic pain as previous report [25]. Rat was anesthetized using sodium pentobarbital through intraperitoneal Injection. The sciatic nerve was exposed at the level of the middle of the thigh by blunt dissection through biceps femoris. Each sciatic nerve was identified the trifurcation and then freed from surrounding loose connective tissues before the 4 snug ligatures of four-zero chromic gut suture was placed around them. The sciatic nerves of Sham-operated rats were exposed but not ligated and the naïve rats were not operated upon.

Electronic von Frey filament (IITC Life Sciences, Woodland Hills, CA, USA) was used to determine the mechanical hyperalgesia. Rat was acclimated to the mesh bottom cages for five to fifteen minutes. Pressure was applied to the plantar surface of each hindpaw of rat through the mesh floor from below with the electronic Von Frey filament. Each hindpaws was alternated with this process for a total of 10 times each day (5 per hindpaw). The force used at the time of paw withdrawal was marked. Pretesting was performed for three consecutive days before bilateral constriction injury surgery. The threshold for the paw withdrawal in response to mechanical stimuli was determined at the 1, 2 and 3 days before surgery and 1,2,3 and 7 and 14 days after surgery. The L4-6 dorsal horn, bilateral L4-6 DRG of spinal cord segments, anterior cingulated cortex (ACC) and hippocampus were harvested and then frozen at the liquid nitrogen.

Cold allodynia was measured on the three consecutive days before surgery and on 1, 2, 3 and 7 and 14 day after surgery. A drop of acetone was applied to each hindpaw through the polyethylene plastic tubing on the room temperature. A withdrawal of hindpaw in response to spread of the acetone over the surface of hindpaw was meann as a sign of the cold allodynia. Data was regarded as the percentage of the applications that induced the hindpaw withdrawal response. An augment in percentage of application eliciting the withdrawal response compared to the control was regarded as the development of promoted cold sensitivity.

PC12 cell (pheochromocytoma cell lines of rats) was collected from the cell bank center of the of Institute of Basic Medical Sciences, Chinese Academy of Medical Sciences (Beijing, China) and was cultured in the RPMI-1640 media (Gibco; Invitrogen; Life Technologies, Germany) supplemented with donor horse serum and fetal bovine serum. NGF-2.5 (50 ng/mL, Peprotech) was added to the medium and maintained for seven to ten days.

Total RNA from cell or tissue was extracted with the TRIzol Reagent (Invitrogen, CA, USA). Real-time PCR was performed to determine the CCAT1 and miR-155 and mRNA expression by using the SYBRW Green PCR Master Mix (Roche, Germany) on the LightCycler 480 system (Roche, Basel, Switzerland). The relative expression level of XX was normalized to GAPDH. U6 was performed as the internal control. The result was measured following to the comparative 2-DDCT method.

Primary antibodies were used in our study including xx (Bioworld Technology, Louis Park, MN, USA). Equal amount of the protein was separated with 12% SDS-PAGE and then transferred to PVDFmembrane (Beyotime). The membrane was blocked in nonfat dry milk for 1 hour and incubated with primary antibodies overnight. After washed three times in TBST, the membrane was incubated with HRP-linked secondary antibodies for 1 hour. The signal was measured by using ECL detection system. GAPDH was used as the loading control.

This work was supported by grants from the Science and technology research project of Henan province (grant number: 201503178) and (grant number: Wjlx2015068).