Recent studies have indicated that long non-coding RNAs (lncRNAs) play important regulatory roles in tumor development and progression. However, the contribution of small nucleolar RNA host gene 20 (SNHG20) to gastric cancer development remains largely unknown. The aim of the study is to investigate the functional significance of SNHG20 involved in gastric cancer (GC) progression. In the study, our results demonstrated that the expression levels of SNHG20 were remarkably up-regulated in GC cells. Functionally, SNHG20 promoted the GC MKN45 and BGC-823 cells proliferation and invasion. Furthermore, knockdown of SNHG20 significantly inhibited the epithelial-mesenchymal transition (EMT) in MKN45 and BGC-823 cells, whereas, the overexpression of SNHG20 had the promoting effects. Moreover, we found that overexpression of SNHG20 in MKN45 and BGC-823 cells significantly inhibited the expression of E-cadherin and p21 via binding to EZH2 and regulated the GSK-3β/β-catenin signaling pathway. Thus, the results showed that SNHG20 acted as an oncogene in GC and targeting SNHG20 may serve as a therapeutic target for GC.

Gastric cancer (GC) is one of the most common digestive malignant tumors and ranks as the second cause of death by malignancy worldwide [1, 2]. About 35% GC patients appear synchronous distant metastases and the vast majority of patients present with hepatic metastatic disease, sometimes accompanied by synchronous peritoneal and lung dissemination [3]. In the recent years, survival of GC patients has shown only minor improvement, although significant advances including diagnostic techniques, surgical and chemotherapeutic approaches, the development of novel therapeutic agents [4]. Therefore, an improved understanding of molecular biology mechanisms involved in gastric cancer progression will facilitate the development of effective targeted therapeutic strategies for patients.

Small nucleolar RNA host gene 20 located at 17q25.2 was originally reported in hepatocellular carcinoma (HCC) and promoted the cell proliferation [11]. Another study confirmed that SNHG20 expression was significantly up-regulated in colorectal cancer (CRC) and knockdown of SNHG20 suppressed CRC cell proliferation, invasion and migration, and cell cycle progression [12]. To date, nothing has been known how SNHG20 are involved in GC progression. Therefore, we conducted this study to investigate the functional significance of SNHG20 in gastric cancer (GC) progression and to explore possible mechanisms underlying its functionality.

Total RNA was extracted from the cells by using Trizol reagent (TaKaLa, Dalian, China), according to the manufacturer’s instructions. RNA was reverse transcribed to cDNA by using a Reverse Transcription Kit (Takara, Dalian, China). Real-time PCR analysis was carried out with SYBR Premix Ex Taq (Takara, Dalian China). Results were normalized to the expression of GAPDH. The cycle conditions were 95°C for 30s, then 40 cycles of 95°C for 5 sec, 60°C for 34 sec. The qRT-PCR assays were conducted on an ABI 7500. Relative quantification (2-ΔΔCt) method was used for calculating fold changes. The Primer sequence for SNHG20, forward:5′-ATGGCTATAAATAGATACACGC-3′,reverse:5′-GGTAC AAACAGGGAGGGA-3′, for GAPDH, forward: 5′-CGG AGTCAACGGATTTGGTCGTAT-3′, reverse 5′-AGCCTT CTCCATGGTGGTGAAGAC-3′.

Three siRNAs targeting SNHG20 and one negative control siRNA were purchased from Genepharma (Shanghai, China). In brief, 50 nM of each siRNA was transfected into 1 × 10 5 MKN45 or BGC-823 cells per well in 6-well plate by using Lipofectamine 3000 Transfection Reagent (Invitrogen) according to the manufacturer’s instructions. The sequences of siRNAs against SNHG20 were as follows: siSNHG20-1,sense, 5′-GCCUAGGAUCAUCCAGGUUTT-3′,anti-sense, 5′-A ACCUGGAUGAUCCUAGGCTT-3′; si-SNHG20-2, 5′-C CUGUUGUGUAUGGCUAUATT-3′, si-SNHG20-3, sense, 5′-UAUAGCCAUACACAACAGGTT-3′, anti-sense, 5′-GC CACUCACAAGAGUGUAUTT-3′. Si-EZH2, sense, 5′- TTCATGCAACACCCAACACT-3′, anti-sense, 5′- GAG AGCAGCAGCAAACTCCT-3′. Ectopic expression of SNHG20 was achieved through pcDNA3.1-SNHG20 transfection, with an empty pcDNA3.1 vector used as a control, the cells were harvested and detected after transfection at 48 h.

The cell proliferation was measured by using Cell Counting Kit-8 (CCK-8) (Dojindo Molecular Technologies, Kumamoto, Japan). Briefly, cells transfected with si-SNHG20 or si-NC and pcDNA3.1-SNHG20 or pcDNA3.1 plasmid were seeded in a 96-well microplate with 3000 cells per well. Cells were cultured in 10% CCK-8 diluted in normal medium until visual color conversion occurred. Proliferation rates were detected at 0, 24, 48, 72 hours after transfection and measured in the absorbance at 450 nm.

Cell migration and invasion were evaluated by using non-Matrigel-coated or Matrigel-coated transwell cell culture chambers (BD Matrigel Invasion Chamber; BD Biosciences, San Jose, CA, USA) of 8 μm pore size according to the manufacturer’s instruction. For migration assays, 1 × 105 cells were seeded in the top chamber without Matrigel (For invasion assay, the 1 × 10 5 cells were seeded in the top chamber coated with Matrigel) supplemented with 200 μL serum-free medium, and 500 μL of 10% FBS containing medium was added to the lower chamber. After 24 hours, cells were fixed with methanol and stained with crystal violet. Cells on the upper surface were removed using a cotton swap. The number of migrating or invasion cells was calculated under the microscope in ten random fields and shown as the average per field.

RIP experiments were performed according to previous report by using a Magna RIP RNA-Binding Protein Immunoprecipitation Kit (Millipore, USA) according to the manufacturer’s instructions [13]. Antibody was used for RIP assays were EZH2, H3K27me3 (Cell Signaling Technology, USA). When RIP treated with RNase, lysates were incubated with RNase for 1 hour in 37 °C. The co-precipitated RNAs were detected by RT-PCR analysis.

ChIP assay was performed as previously described [14]. Briefly, Cell lysates were then sonicated to generate chromatin fragments and immunoprecipitated with EZH2 and H3K27me3-specific antibody (CST, USA) or IgG as control. Precipitated chromatin DNA was recovered and Real-time PCR was used to detect the amount of DNA immunoprecipitated by antibody.

The experiments were independently repeated at least triplicate times. Data were expressed as mean ± SD. Differences between two independent groups were tested with the student’s test. All statistical analyses were performed by using SPSS 17.0 software. P < 0.05 was considered to be statistically significant.

To explore the expression levels of SNHG20 in GC cells, we performed real-time PCR assay. The results showed that the expression of SNHG20 in three human GC cells were significantly up-regulated compared with normal gastric epithelial cell GES-1 (Figure 1A). To further detected the biological function of SNHG20 in GC progression, we knocked down SNHG20 in MKN45 or BGC-823 cells by using three siRNAs oligos (Figure 1B–1C), and overexpressed the SNHG20 levels by transfecting pcDNA3.1-SNHG20 into BGC-823 cells (Figure 1D).The results showed that the SNHG20 was effectively inhibited by si-SNHG20-2, and the si-SNHG20-2 was used in the following study. 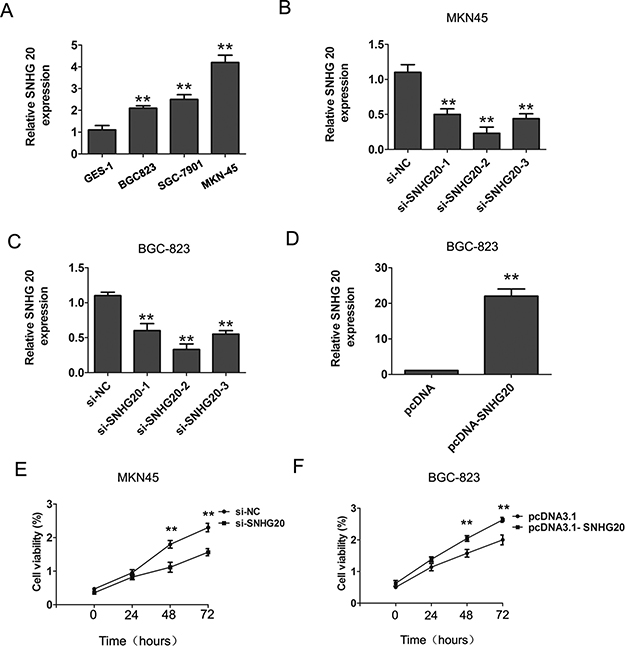 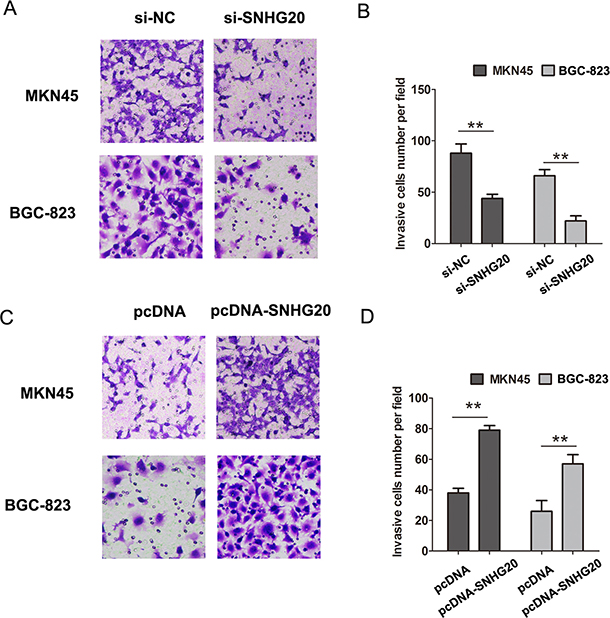 It is well recognized that EMT plays a critical role in GC invasion and metastasis [15]. Therefore, we further explored whether SNHG20 had effects on EMT phenomenon in GC cell. The western-blotting results showed that knockdown of SNHG20 significantly inhibited the expression levels of transcription factor Twist1 and EMT maker Vimentin, but upregulating the E-cadherin expression in MKN45 cells (Figure 3A). Ectopic expression of SNHG20 in BGC-823 cells promoted the expression levels of Twist1 and Vimentin, but downregulating the E-cadherin expression (Figure 3B). In general, these results showed that upregulation of SNHG20 promoted the epithelial-mesenchymal transition (EMT) in GC cells.

EZH2 had been reported promoted tumor cell migration and invasion via epigenetic repression of E-cadherin [17]. In GC cells, a previous study found that long non-coding RNA ZFAS1 promoted gastric cancer cells proliferation by epigenetically repressing KLF2 and NKD2 expression [18]. Our results found that after knockdown of SNHG20, the p21 and E-cadherin expression were increased in MKN45 or BGC-823 cell (Figure 3F and Figure 3G). In addition, after knockdown of SNHG20, the protein levels of p21 were also increased in MKN45 and BGC-823 cells (Figure 4A–4B). 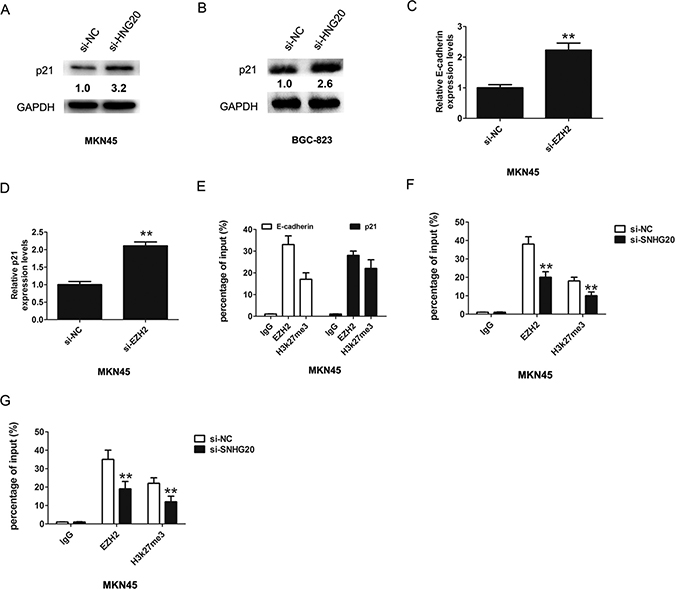 To investigate the effect of SNHG20 on Wnt/β-catenin signaling pathway, GSK-3β, p-GSK-3β and β-catenin were detected by the western-blotting analysis after knockdown or overexpression of SNHG20 in MKN45 or BGC-823 cells. As expected, the protein level of β-catenin and p-GSK-3β were significantly decreased, but GSK-3β was increased by transfecting si-SNHG20 into MKN45 cells (Figure 5A). However, the expression of β-catenin and p-GSK-3β was increased, but the GSK-3β was downregulated when transfecting pcDNA3.1-SNHG20 plasma into BGC-823 cells (Figure 5B). Thus, overexpression of SNHG20 activated GSK-3β/β-catenin signaling pathway in the GC cell.

Figure 5: SNHG20 activated GSK-3β/β-catenin signaling pathway in the GC cell lines. (A–B) The relative protein expression levels of GSK-3β, p-GSK-3β, β-catenin were detected after knockdown of SNHG20 or overexpression of SNHG20 by western-blotting analysis in MKN45 or BGC-823 cells, and normalized to GAPDH expression.

Recent findings have revealed that lncRNAs are involved in the development and progression of human disease, especially in some tumors [19]. However, the mechanism of action and biological function of SNHG20 in GC cells remain unknown. Only two reporters in previous study were involved in SNHG20. One is that Li et al. found that increased long non-coding RNA SNHG20 predicted poor prognosis of colorectal cancer [12]. The other study revealed that SNHG20 was overexpressed in HCC tissues and knockdown of SNHG20 in SK-Hep-1 cells significantly inhibited cellular proliferation, migration and invasion [11]. In the study, we demonstrated that the expression of SNHG20 was remarkably up-regulated in GC cells and knockdown of SNHG20 significantly inhibited GC cell proliferation, invasion and EMT.

In conclusion, our present results proved that SNHG20 plays vital roles in controlling GC cell invasion by activating EMT process. Furthermore, SNHG20 mediated the oncogenic effects through its epigenetic silencing of the p21 and E-cadherin expression by binding with EZH2 and regulated the GSK-3β/β-catenin signaling pathway. Thus, the results showed that inhibition of SNHG20 may serve as a therapeutic target for GC.

We thank the Department of Gastroenterology, Long gang District Central Hospital of Shenzhen, for its generous help.