Platinum-based chemotherapeutic drugs are irreplaceable for the treatment of advanced non-small cell lung cancer (NSCLC). However, acquired drug resistance has become a major obstacle for the clinical application of chemotherapy on NSCLC. In the present study, we established carboplatin-resistant NSCLC models on A549 and PC9 cell lines, which were named A549/R and PC9/R. Besides the low sensitivity of A549/R and PC9/R to carboplatin treatment, they exhibited higher metabolism rate of glucose compared to their parental A549 and PC9 cells, respectively. Mechanically, we confirmed that overexpression of PKM2 in A549/R and PC9/R was responsible for the high glucose metabolism and carboplatin resistance. Metformin, an antidiabetic drug, was observed to increase the sensitivity of carboplatin-resistant NSCLC cells to carboplatin treatment in vitro and in vivo. Mechanically, metformin decreased expression of PKM2 and subsequently inhibited the glucose uptake, lactate generation and ATP production in A549/R and PC9/R. Therefore, metformin promoted carboplatin-induced apoptosis through the mitochondria pathway. In addition, we demonstrated that metformin treatment also impaired the cross-resistance of A549/R and PC9/R to cisplatin, etoposide and 5-fluorouracil.

Due to the high potential of metastasis and low sensitivity to chemotherapy and/or radiation therapy, non-small cell lung cancer (NSCLC) is the leading cause of cancer-related deaths worldwide [1, 2]. For NSCLC patients without mutation of epidermal growth factor receptor (EGFR), chemotherapy is an irreplaceable treatment [3, 4]. Unfortunately, repeated use of chemotherapeutic drugs usually induces multiple drug resistance in cancers, especially in NSCLC [5]. It is urgent to explore and reveal the mechanisms by which chemoresistance occurs in NSCLC.

Platinum-based chemotherapy is considered as the first-line treatment for patients with advanced NSCLC. Carboplatin or cisplatin activates apoptosis signaling pathways of tumor cells by formatting inter- and intrastrand cross-links with DNA [6, 7]. However, due to the repeated use of platinum-based chemotherapeutic drugs, NSCLC cells develop strategies to resist apoptosis pathways [8]. Thus, adjuvant therapies are regard as indispensable treatments to reverse or delay the occurrence of drug-resistance.

Metformin (1,1-dimethylbiguanide hydrochloride) is a well-known oral medicine for treatment of type-II diabetes. Recent research demonstrates that the use of metformin in patients with diabetes may reduce the occurrence of cancers [9]. Furthermore, metformin treatment is reported to prevent lung adenoma formation and induce growth inhibition and cell cycle arrest in renal cancer cells [10, 11]. For adjuvant therapy of cancer, studies have indicated that metformin may reverse the resistance of breast cancer cells to doxorubicin by reducing the drug efflux [12]. Combination with metformin promotes sorafenib to suppress the proliferation and induce autophagy of hepatocellular carcinoma cells [13]. In lung cancer, metformin was found to reverse resistance to tyrosine kinase inhibitors and ALK inhibitors [14, 15]. It is indeed that metformin acts as a potential anti-cancer drug. The aim of this study is to investigate the role of metformin in reversing the carboplatin-resistance in NSCLC and explore the underlying mechanisms.

Overexpression of PKM2 is associated with carboplatin-resistance in NSCLC cells 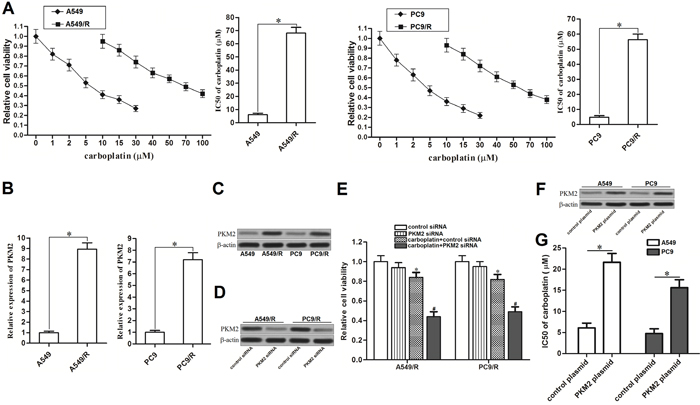 We first tested the cytotoxicity of metformin to carboplatin-resistant NSCLC cells. As shown in Figure 2A, cytotoxicity of metformin to A549/R and PC9/R was slight, even if the concentration of it was very high. We therefore chose a relative low concentration of metformin (2 mM) for co-treatment with carboplatin. Interestingly, we found that metformin (2 mM) but not the carboplatin (20 μM) decreased the expression of PKM2 in A549/R and PC9/R cells at mRNA level (Figure 2B) and protein level (Figure 2C). It suggested that metformin may play the subsidiary role in carboplatin-base chemotherapy by targeting PKM2. In addition, we observed that transfection with PKM2 plasmid significantly abolished the effect of metformin on decreasing the expression of PKM2. 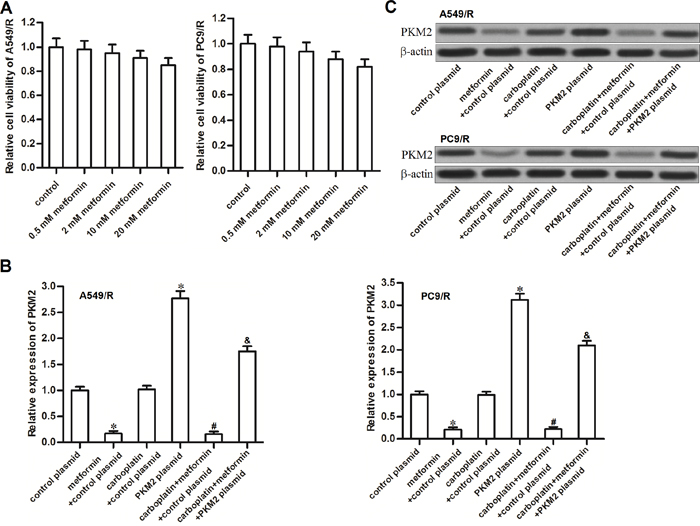 Recent research suggested that high rate of glucose metabolism facilitated cancer cells’ survival and contributed to chemoresistance [16]. In our study, we observed that glucose uptake was significantly increased when the NSCLC cells became carboplatin-resistance (Figure 3A). Furthermore, A549/R and PC9/R cells produced more amount of lactate and ATP compared with the A549 and PC9 cells, respectively (Figure 3B and 3C). Thus, we indicated that carboplatin-resistant NSCLC cells exhibited higher rate of glucose metabolism compared to their corresponding routine NSCLC cells. In addition, transfection with PKM2 plasmid into routine A549 and PC9 cells significantly increased the glucose uptake (Figure 3D), lactate generation (Figure 3E) and ATP production (Figure 3F). These results indicated that overexpression of PKM2 induced high rate of glucose metabolism in NSCLC. We next investigated the effect of metformin on carboplatin-resistance of NSCLC. After treatment with metformin and carboplatin in A549/R and PC9/R cells, we found that metformin but not the carboplatin significantly decreased glucose uptake and lactate production in both of these cells (Figure 3G and 3H). As the results, metformin strongly reduced the production of ATP in A549/R and PC9/R (Figure 3I). In addition, transfection with PKM2 plasmid significantly abolished the effect of metformin on reducing the glucose uptake, lactate production and ATP production. We therefore demonstrated that metformin hampered the glucose metabolism of carboplatin-resistant NSCLC cells by decreasing the expression of PKM2. 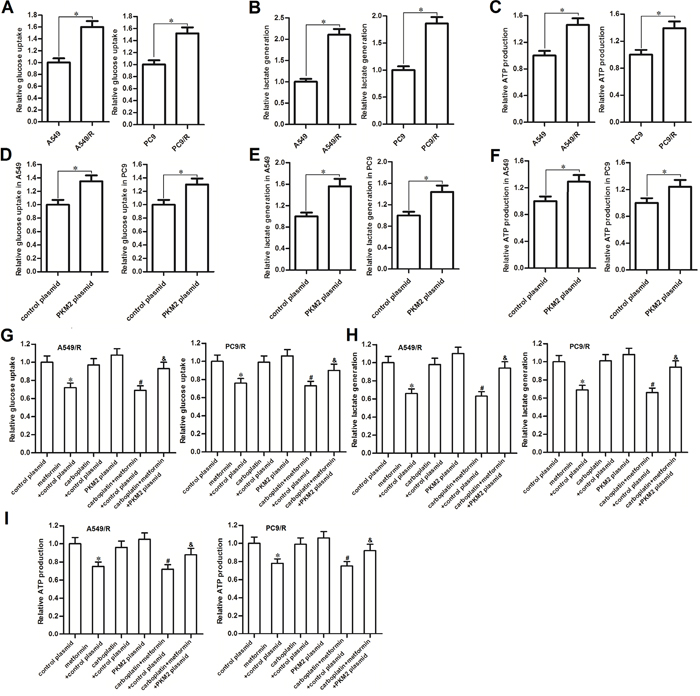 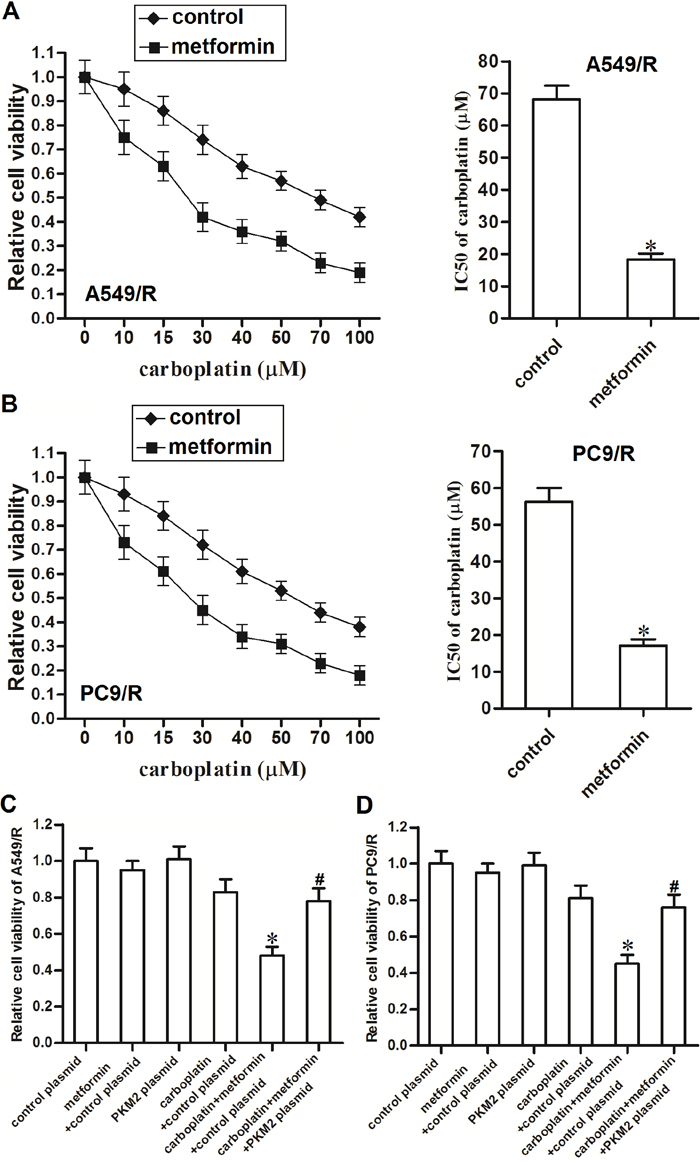 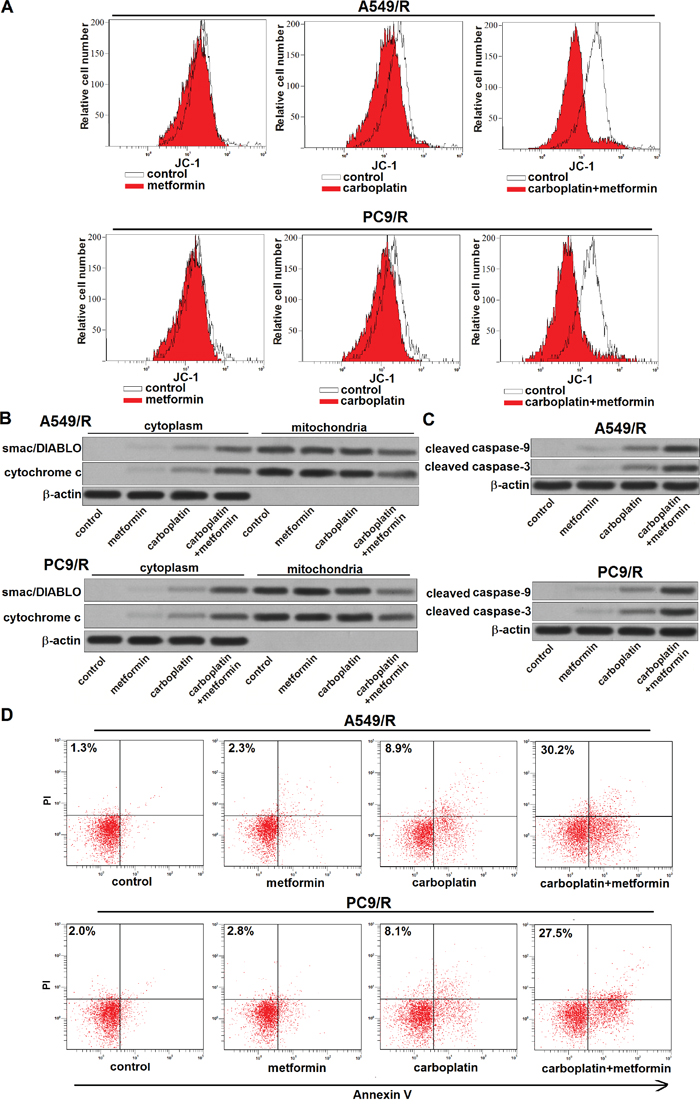 Metformin reverses cross-resistance of A549/R and PC9/R to cisplatin, etoposide and 5-fluorouracil 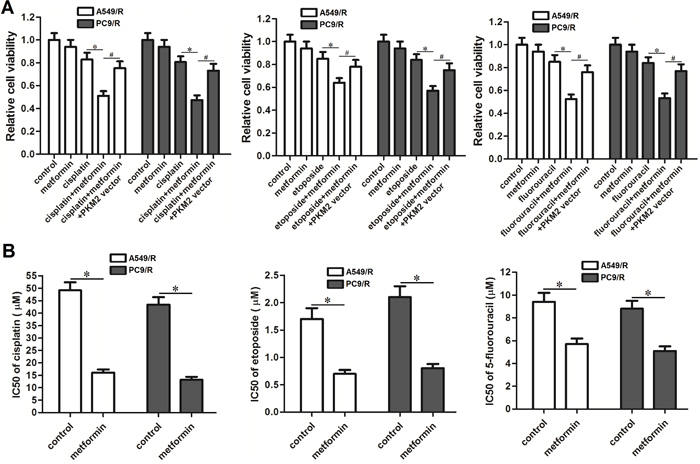 Pyruvate kinase (PK) is a key enzyme of glycolysis. The Pyruvate kinase isoenzyme M1 (PKM1) is expressed in normal tissues while the PKM2 is strongly overexpressed in cancers. In glucose metabolism process, PKM2 converts phosphoenolpyruvate and ADP to pyruvate and ATP. Cellular pyruvate produces more amount of ATP through oxidative mitochondrial metabolism (OXPHOS). Indeed, the level of glucose metabolism and ATP is dependent on the level of PKM2 in cancer [27, 28]. Moreover, recent studies indicate that overexpression of PKM2 induces chemoresistance [29, 30]. In the present study, we observed significantly higher expression level of PKM2 in carboplatin-resistant NSCLC cells compared to routine NSCLC cells. Furthermore, knockdown of PKM2 in carboplatin-resistant NSCLC cells was found to sensitize these cells to carboplatin treatment. We proved the role of PKM2 in inducing the chemoresistance.

In conclusion, we provide reliable evidence that metformin treatment can partially reverse the resistance of NSCLC cells to carboplatin-induced apoptosis by inhibiting the glucose metabolism and ATP production. Furthermore, our data also indicated that the cross-resistance of NSCLC cells may be partially reversed by metformin. These findings suggest the value of metformin adjuvant treatment on platinum-based chemotherapy in NSCLC. However, further efforts should be made to explore the effect of metformin on other types of cancer and the biological mechanism by which metformin suppresses the expression of PKM2.

For overexpression of PKM2, open reading frame of PKM2 gene was amplified by PCR and then linked to pcDNA3.1 eukaryotic expression plasmid (Invitrogen). For knockdown of PKM2, the specific PKM2 small interfering RNA (siRNA) was purchased from Genechem Co., Ltd. (Shanghai, China). To perform the gain (loss)-of-function experiments of PKM2, A549/R and PC9/R cells were transient transfected with 2 μg/ml PKM2 plasmid or 50 pmol/ml PKM2 siRNA using Lipofectamine 2000 (Invitrogen) according to the manufacturer’s instructions.

MTT assay was performed to detect the viability of NSCLC cells. First, 5 × 103 NSCLC cells were seeded on 96-well plates and cultured at 37 °C. After treatment with chemotherapeutic drugs and metformin, cells were treated with MTT for additional 4 h. Cell viability was evaluated according to the absorbance measured at 490 nm by using an ELISA microplate reader (Sunrise Microplate Reader, TECAN, Switzerland). Half maximal inhibitory concentration (IC50) of chemotherapeutic drugs to NSCLC cells was calculated according to the corresponding cell viability curve.

After treatment with carboplatin (20 μM) and metformin (2 mM), A549/R and PC9/R cells were collected and washed with PBS for twice. Cell apoptosis and MMP of A549/R and PC9/R were measured by using the Annexin V-FITC apoptosis detection kit (Sigma Aldrich, USA) and JC-1 mitochondrial dye (Biovision) respectively according to the manufacturer’s instructions.

All the experiments were independently repeated at least 3 times. Data are represented as mean ± SD and analyzed by using SPSS 15.0. Non-paired t test was used to estimate the statistical differences between two groups. One-way analysis of varianve (ANOVA) was used to determine the differences between three or more groups. A value of P<0.05 was considered to indicate a statistically significant difference.

Thanks are due to the whole contributors who assisted with this study.