Colorectal cancer (CRC) is common and can be considered as a disease of older adults. About one half of the cases were diagnosed in patients over 70 years of age. Decision-making about treatment for these older patients can be complicated by age-related physiological changes, impaired functional status, limited social support, and comorbidities. Many trials excluded patients using an upper limit of 75 years of age. Little is known about prognostic factors in patients who are over this age limit. In this study, we conducted an analysis in the Surveillance, Epidemiology and End Results (SEER) database to identify specific clinicopathologic features and prognostic factors for these vulnerable cancer patients (N= 293,616). They were predominantly female and had more stage I and II diseases in comparison to younger patients. On average, these patients had lower 5-year cause-specific mortality than younger patients (41.98% vs. 63.14%, P<0.001). Gender, marital status, ethnicity, Tumor-Node-Metastasis stage, grade, histologic subtype, tumor size, status of surgery and radiotherapy were all independent prognostic factors for these elderly CRC patients. In particular, surgery could improve prognosis for all CRC patients with the exception of those who are older than 94 years old and with stage III disease. The identified clinicopathologic features and prognostic factor will help guide treatment decision-making for this oldest old subset of patients with CRC.

Colorectal cancer (CRC) is among the leading causes of cancer-related deaths worldwide [1, 2]. The median age of CRC patients was around 69 years old [3]. Decision-making with regards to treatment for older CRC patients may be complicated by certain age-related physiological changes, impaired functional status, limited social support, ability to tolerate treatment toxicity, and presence of comorbidities [4–7]. Many clinical trials have set 75 years as their upper age limit for study enrollment, excluding the oldest old subset [8]. Evidence for the treatment in older adults were derived primarily from individual trial or pooled subgroup analyses [9, 10] [11, 12] and large population-based studies [13, 14]. Because these studies only evaluated the effects of chemotherapy on CRC, it remains unknown whether patients over 75 years of age would benefit from surgery or radiation therapy. Moreover, little is known about clinicopathologic features and prognostic factors specific for this older and frail subset of CRC patients.

To address these questions, we analyzed the clinical data of CRC patients in the Surveillance, Epidemiology, and End Results (SEER) database. Herein, our analysis unveiled clinical-pathological factors of both younger and older CRC patients. We have further examined prognostic factors for the oldest old subset. 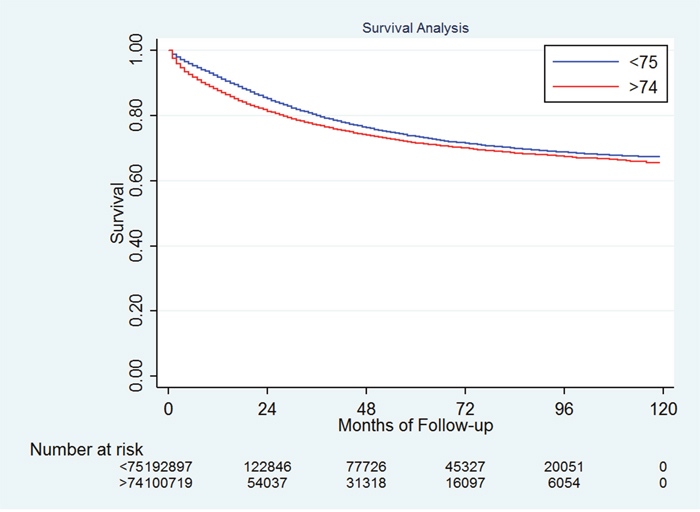 Figure 1: Survival difference between the younger and older patients.

Moreover, females had a better prognosis compared to the males. The other factors that affect prognosis includes marital status, ethnicity, location of primary tumor, and tumor size. In contrast, whether the patients were covered by insurance or not had no impact on the disease-specific survival.

Who benefited from surgery?

To better understand the role and benefit of surgery in treatment of patients with CRC who were over 75 years of age patients, we analyzed these patients according to their disease stage and age. We first stratified the patients into 5 age groups – 75-79, 80-84, 85-89, 90-94, and >94 years old. Surgery did not bring survival benefit to the patients who were older than 94 years old and with stage III diseases. As for the rest of the patients, those who received surgery for CRC had a significantly improved 5-year CSS as compared to those did not undergo such surgery (Table 4). Moreover, for the patients with the same stage of TNM, the prognosis for CRC worsened with increasing age.

Table 4: The 5-year CSS for older patients with or without surgery

Colorectal cancer is a highly prevalent malignancy in older adults worldwide [15–17]. With rapid growth of older adults in numbers, particular the oldest old subset aged 75 years and over, the number of older patients with CRC and those who seek treatment will increase rapidly. However, many clinical trials set an upper age limit of 75 years for study enrollment. Even in trials with no such age limit, they only enrolled a small number of patients with advanced age. These limited number of patients are unlikely representative of the general geriatric population with CRC. To address this important issue, we took the advantage of the existing data in the SEER, a composite population-based cancer registry covering several discrete geographic regions. We found that about one third of the CRC patients were of age 75 or over. We then further analyzed their clinicopathologic features as well as prognostic factors.

Firstly, we identified a number of unique clinicopathologic features in this oldest old subset. In comparison to the young group, these older patients were more likely single or widowed. They had larger and more poorly differentiated tumor and their tumor was more likely located in the ascending colon. On the other hand, these older patients had less metastasis of primary tumor and less signet ring cell carcinoma. Nonetheless, the 5-year CSS was lower in the older patients (P < 0.05). Two previous studies reported age as an independent negative prognostic factor in stage I-IV colon cancers [3, 18] in which “older patients” were defined differently; one study used median age (69 years) as the cutoff value [3] while the other used 40 years of age as the cutoff value [18]. This study, for the first time, reports 5-year CSS in patients with CRC who were 75 years old and over, which was nearly 42%.

As this oldest subset of elderly patients are more often challenged by age-related physiological changes, impaired functional status, limited social support, decreased ability to tolerate treatment toxicity, and presence of comorbidities, it is unclear if they would benefit from cancer treatments similar to the younger patients. Here, we report that surgical intervention provided survival benefit for most patients in this age group except for those who were both over 94 years of age and had stage III disease. Radiation therapy also offered survival benefits for patients with rectal cancer in this age group. We focused our analysis on patients with rectal cancer because they accounted for over 80% of those receiving radiation therapy. Consistent with these results, Pérez Domínguez L et al. found that age did not affect the prognosis after colon cancer resection but was associated with more postoperative morbidity and mortality [22].

This study has limitations. For example, information about chemotherapy was not available in the SEER database. Thus, potential survival benefit of chemotherapy for the oldest old subset of patients with CRC could not be determined in this study, However, subgroup and pooled analyses o phase III clinical trials suggested that the relatively fit older patients with CRC who met the traditional clinical trial inclusion criteria were likely to experience survival benefits from combination Oxaliplatin as the first line therapy similar to the younger patients [20, 21], supporting the hypothesis that the oldest old subset patient would also benefit from first line chemotherapy. Another limitation is that no data were available in the SEER database on comorbidities which are prevalent in the oldest old subset patients and known to influence prognosis and treatment decision-making for these patients. Finally, given that this is a retrospective cohort study, there is potential bias of nonrandomized data between the focused oldest old subset and younger patients with CRC. Despite these limitations, our study has identified specific clinicopathologic features and prognostic factors of the elderly patients with CRC who are 75 years and older. These data will help guide treatment decision-making for this specific and rapid growing group of elderly patients with CRC. In summary, our findings, for the first time showed that the oldest old subset of elderly CRC patients not only had a relatively poor prognosis compared to their younger counterparts but also could potentially benefit from surgery and radiotherapy.

The Surveillance, Epidemiology, and End Results (SEER) database is the largest publicly available cancer dataset. It is a composite population-based cancer registry. The SEER research data include cancer incidence and prevalence as well as patient demographics as tabulated by age, sex, race/ethnicity, and year of cancer diagnosis. The specific dataset used for this study was the SEER Program (http://www.seer.cancer.gov) Research Data (1973-2013).

For the insurance status, individuals in the groups “Any Medicaid”, “Insured” and “Insured/No specifics” were clustered together as “Insured group”.

The study population was derived from the SEER cancer registry. Individuals identified as colorectal adenocarcinoma patients from 2004 to 2013, inclusive, were eligible for our study. Patients were excluded if they (1) had more than one primary cancer and the CRC was not the first to appear, and/or (2) had unknown cause(s) of death or unknown survival months. All the patients included in the study had active follow up and a survival of over 1 month.

The patients’ demographic characteristics and tumor characteristics are summarized using descriptive statistics (Table or Figure). Comparisons of specific categorical variables between the older and younger patients were performed using the Chi squared test, and continuous variables were compared using the Student’s t-test. The primary endpoint of this study was the 5-year CSS, as calculated from the date of diagnosis to the date of cancer-specific death. Deaths attributed to CRC were treated as events, and deaths from other causes were treated as censored observations. Survival function estimation and comparison between older and younger patients were performed using Kaplan–Meier estimates and log-rank test, respectively. The multivariate Cox proportional hazard model was used to evaluate the hazard ratio (HR) and the 95 % CI for all the known prognostic factors for CRC. All statistical analyses were performed using the Intercooled Stata 13.0 (Stata Corporation, College Station, TX). Statistical significance was set at two-sided P < 0.05.

We would like to thank the staff of the National Cancer Institute and their colleagues across the United States, and Information Management Services, Inc., all who have been involved with the SEER Program.

All authors declared that there is no conflicts of interest.