Kahweol, a diterpene molecule from coffee beans, has a variety of bioactivities, including anti-carcinogenesis, anti-tumor, and anti-inflammation properties [10–13]. Anti-carcinogenic properties of kahweol are correlated with the induction of phase II detoxifying and antioxidant enzymes [10]. Our group reported that anti-tumor properties of kahweol may in part be due to inhibition of Akt phosphorylation and activation of JNK signal pathway [14]. Furthermore, kahweol has sensitizing effects of anti-cancer drugs-induced apoptosis. For examples, kahweol sensitizes TRAIL-induced apoptosis through down-regulation of Bcl-2 and c-FLIP expression [15]. Combined treatment with melatonin and kahweol induces apoptosis through up-regulation of PUMA expression [16].

The aim of the present study was to investigate the synergistic effects of kahweol on sorafenib-mediated apoptosis in renal carcinoma Caki cells. The low-dose combination of sorafenib and kahweol enhanced the cytotoxicity by down-regulation of anti-apoptotic protein Mcl-1 and c-FLIP expression.

Sorafenib has anti-cancer effects through inhibiting the RAF-MEK-ERK pathway and receptor tyrosine kinases. However, sorafenib has a many side effects at full dose. Combined sorafenib and other agents reduce dosage of sorafenib, thereby alleviates its side effects. Therefore, we examined whether combined treatment with natural compounds and sorafenib (sub-lethal dosage) induces cell death. As shown in Figure 1A and 1B, among natural compounds, kahweol markedly induced apoptosis dose-dependently in sorafenib-treated cells. 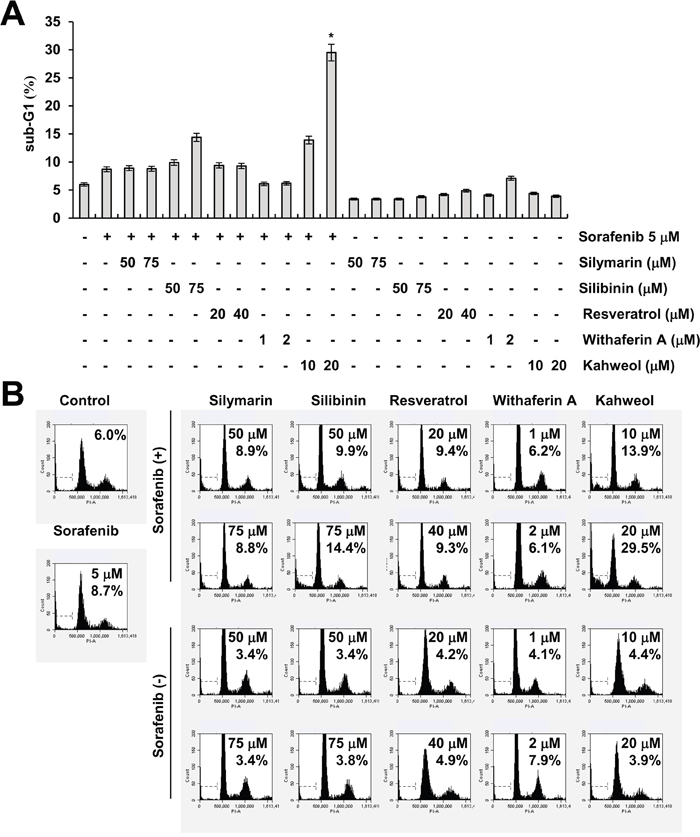 Figure 1: The effect of natural compounds on sorafenib-induced cell death. (A-B) Caki cells were treated with the indicated concentrations of silymarin, silibinin, resveratrol, withaferin A, and kahweol in the absence or presence of 5 μM sorafenib for 24 h. The sub-G1 fraction was measured by flow cytometry. The values in A represent the mean ± SD from three independent samples.

The combination of sorafenib with kahweol induced typical apoptotic morphologies, including blebbing, formation of apoptotic bodies, cell shrinkage, cell detachment on the plate, and chromatin condensation (Figure 2A and 2B). Combined treatment with sorafenib and kahweol markedly induced sub-G1 population and PARP cleavage, which is a substrate of caspase-3 (Figure 2C). Next, we quantified the synergy between the two drugs using Isobologram analysis. Isoboles suggested that sorafenib plus kahweol had synergistic effects (Figure 2D). In addition, combined treatment with sorafenib and kahweol induced cytoplasmic histone-associated DNA fragments (Figure 2E). To further address the caspase activation in kahweol-mediated sensitization to sorafenib-induced apoptosis, we used a pan-caspase inhibitor (z-VAD). Combined treatment markedly increased caspase-3 activation (Figure 2F), and z-VAD blocked sorafenib plus kahweol-induced apoptosis as well as PARP cleavage (Figure 2G). To determine the molecular mechanisms underlying combined treatment-induced apoptosis, we investigated expression levels of apoptosis-related proteins. Both c-FLIP and Mcl-1 expression were down-regulated (Figure 2H). In contrast, other apoptosis-related proteins did not differ in control and combination treated Caki cells. In addition, down-regulation of c-FLIP and Mcl-1 expression was independent of caspase activation (Figure 2I). Collectively, these results indicated that combined treatment with sorafenib and kahweol induces caspase-dependent apoptosis and down-regulation of Mcl-1 and c-FLIP expression. 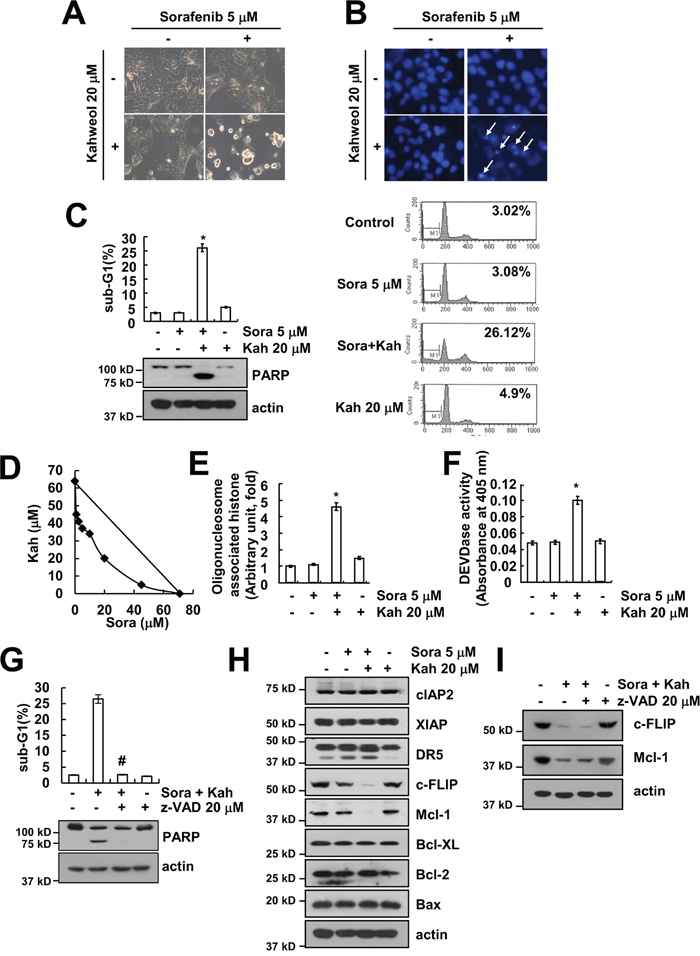 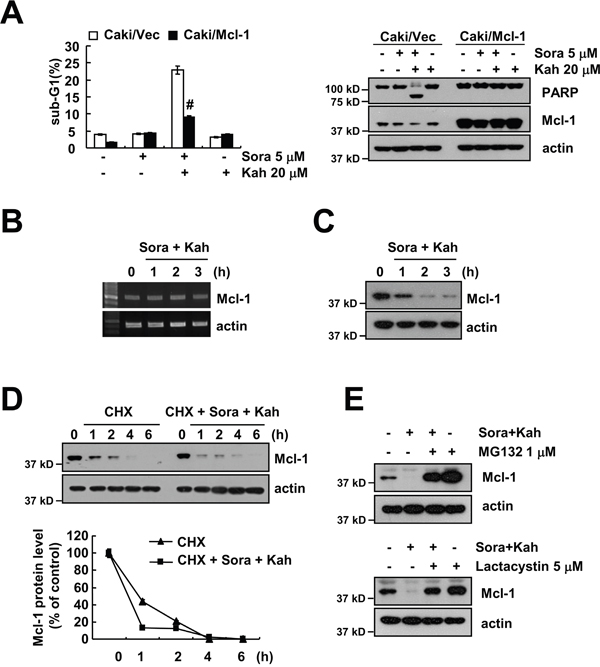 As shown in Figure 2H, c-FLIP expression was down-regulated by combined treatment. Combined treatment with sorafenib and kahweol did not effect on c-FLIP mRNA expression, but c-FLIP protein levels were rapidly down-regulated after 1 h treatment (Figure 4A). As shown in Figure 4B, CHX alone gradually reduced c-FLIP expression, but combined treatment with CHX and sorafenib plus kahweol more rapidly reduced c-FLIP protein expression. In addition, both proteasome inhibitors also prevented c-FLIP down-regulation (Figure 4C). To evaluate the functional importance of the c-FLIP proteins in sorafenib plus kahweol-induced apoptosis, we used c-FLIP overexpressing cells. In contrast to Mcl-1, overexpression of c-FLIP, surprisingly, did not inhibit sorafenib plus kahweol-induced apoptosis and PARP cleavage (Figure 4D). However, anti-FAS (FAS ligand)-induced apoptosis and PARP cleavage were prevented by ectopic expression of c-FLIP (Figure 4E). Interestingly, these data suggested that combined treatment with sorafenib and kahweol induces apoptotic cell death in c-FLIP overexpressed Caki cells. 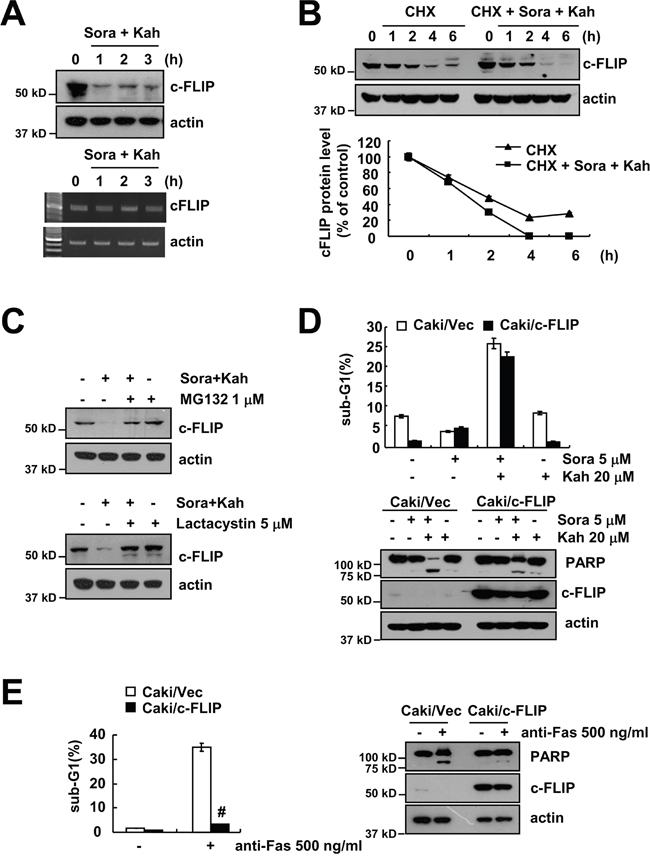 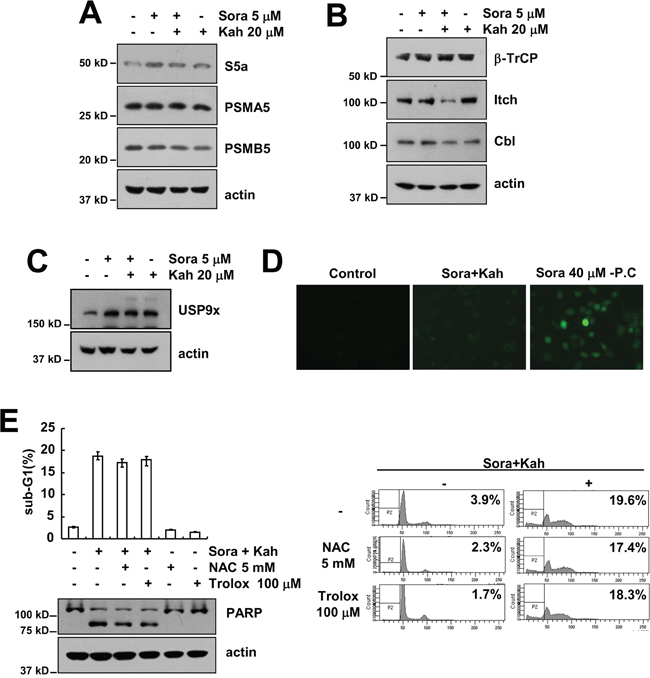 We next investigated the effect of sorafenib plus kahweol on apoptosis in other renal cancer cells (A498 and ACHN cells) and other type cancer cells, including human lung carcinoma (A549) and breast carcinoma (MDA-MB-361) cells. We found that combined treatment with sorafenib and kahweol induced apoptotic cell death and cleavage of PARP in A498, ACHN, A549, and MDA-MB-361 cells (Figure 6A and 6B). Furthermore, sorafenib plus kahweol induced down-regulation of Mcl-1 and c-FLIP expression (Figure 6A and 6B). By contrast, combined treatment with sorafenib and kahweol did not induce morphological changes, apoptosis, and expression of Mcl-1 and c-FLIP expression in normal human mesangial cells (MC) and normal human skin fibroblast cells (HSF) (Figure 6C–6F). 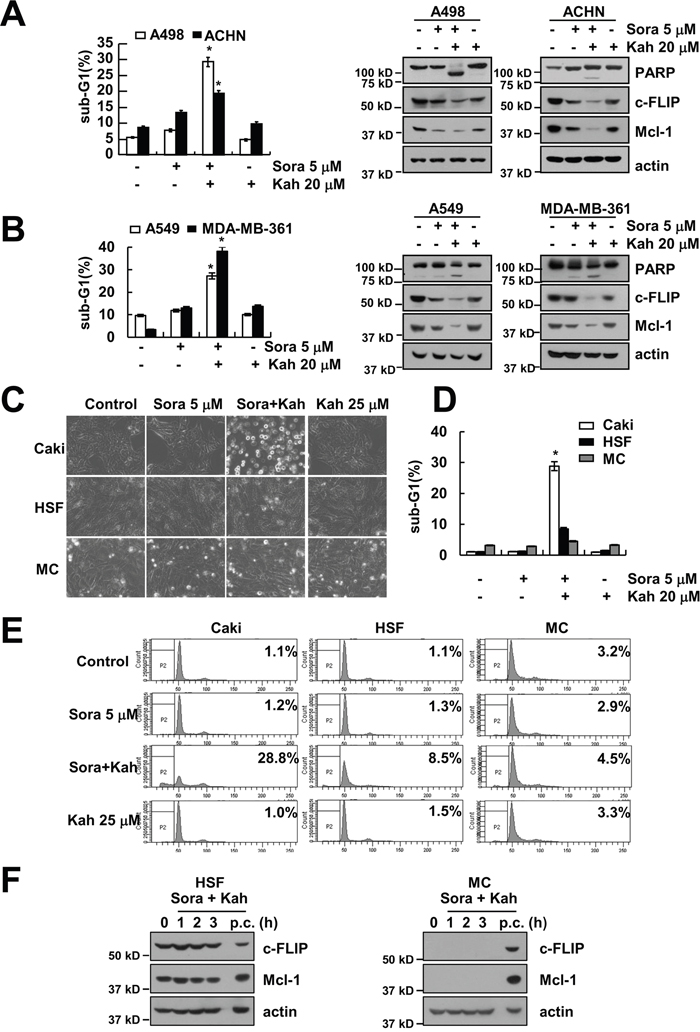 Numerous investigations have been reported that generation of intracellular ROS plays a critical a role in apoptosis [23]. Interestingly, a high concentration of kahweol (75 μM) induced ROS production in breast carcinoma MDA-MB-231 cells [24]. However, a low concentration of kahweol (25 μM) did not increase ROS production in our experiment. In addition, as shown in Figure 5E, pretreatment with NAC or trolox did not prevent combined treatment-induced sub-G1 population and cleavage of PARP. Therefore, ROS is not critical for the induction of apoptosis by combined treatment with sorafenib and kahweol.

Mcl-1 and c-FLIP protein expression are regulated at the transcriptional and post-translational levels [17, 25–27]. Combined treatment with sorafenib and kahweol did not alter Mcl-1 and a c-FLIP mRNA level, suggesting that down-regulation of Mcl-1 and c-FLIP protein is likely to be a post-transcriptional event. Interestingly, inhibition of proteasome with MG132 or lactacystin rescued Mcl-1 and c-FLIP down-regulation (Figures 3E and 4C). Combined treatment with sorafenib and kahweol induced down-regulation of c-FLIP and Mcl-1 expression by proteasomal degradation (Figures 3E and 4C), but combined treatment with sorafenib and kahweol did not increase proteasome activity (Data not shown; negative data). Furthermore, combined treatment did not change expression levels of subunits of proteasome catalytic core proteins (Figure 5A). A key player in ubiquitin-mediated protein degradation is the E3 ubiquitin ligase [28]. To date, four E3 ligases [Mcl-1 Ubiquitin ligase E3 (MULE), beta transducin-containing protein (β-TrCP), F-box and WD repeat domain-containing 7 (FBW7), and Tripartite motif containing 17 (Trim17)] and one deubiquitinase (USP9x) have been involved in ubiquitin-mediated Mcl-1 regulation [17, 29–32]. The E3 ligase Casitas B-lineage lymphoma (Cbl) and Itch have been implicated in c-FLIP stability control [25, 33]. We also investigated the E3 ligase expression of c-FLIP and Mcl-1. However, combined treatment with sorafenib and kahweol did not change E3 ligase expression of β-TrCP, Itch and Cbl (Figure 5B). How other E3 ligase or unknown E3 ligase in post-translational regulation of c-FLIP and Mcl-1 protein affect apoptotic cell death may need further investigation.

Collectively, these results suggest that sorafenib plus kahweol induced apoptosis through down-regulating Mcl-1 expression at post-translational levels. Therefore, it uncovered a critical role of kahweol in enhancing the anti-cancer effect of sorafenib, suggesting that combined treatment with sorafenib and kahweol offers a rationale for a new therapeutic combination for the treatment of renal carcinoma.

For flow cytometry, the cells were resuspended in 100 μl of phosphate-buffered saline (PBS), and 200 μl of 95% ethanol was added while the cells were being vortexed. Then, the cells were incubated at 4°C for 1 h, washed with PBS, resuspended in 250 μl of 1.12% sodium citrate buffer (pH 8.4) with 12.5 μg of RNase and incubated for an additional 30 min at 37°C. The cellular DNA was then stained by adding 250 μl of a propidium iodide solution (50 μg/ml) to the cells for 30 min at room temperature. The stained cells were analyzed by fluorescent-activated cell sorting on a FACScan flow cytometer to determine the relative DNA content, which was based on the red fluorescence intensity.

To examine the cellular nuclei, the cells were fixed with 1% paraformaldehyde on glass slides for 30 min at room temperature. After fixation, the cells were washed with PBS and a 300 nM 4′,6′-diamidino-2-phenylindole solution (Roche, Mannheim, Germany) was added to the fixed cells for 5 min. After the nuclei were stained, the cells were examined by fluorescence microscopy.

For the Western blot experiments, the cells were washed with cold PBS and lysed on ice in modified RIPA buffer (50 mM Tris-HCl pH 7.4, 1% NP-40, 0.25% Na-deoxycholate, 150 mM NaCl, 1 mM Na3VO4, and 1 mM NaF) containing protease inhibitors (100 μM phenylmethylsulfonyl fluoride, 10 μg/ml leupeptin, 10 μg/ml pepstatin, and 2 mM EDTA). The lysates were centrifuged at 10,000 x g for 10 min at 4°C, and the supernatant fractions were collected. The proteins were separated by SDS-PAGE electrophoresis and transferred to Immobilon-P membranes. The specific proteins were detected using an enhanced chemiluminescence (ECL) Western blotting kit according to the manufacturer’s instructions.

The possible synergistic effect of sorafenib and kahweol was evaluated using the isobologram method. In brief, cells were treated with different concentrations of sorafenib and kahweol alone or in combination. After 24 h, relative survival was assessed, and the concentration effect curves were used to determine the IC50 (the half-maximal inhibitory concentration) values for each drug alone and in combination with a fixed concentration of the second agent. The XTT assay was employed to measure cell viability using a WelCount Cell Viability Assay Kit (WelGENE, Daegu, Korea). In brief, the reagent was added to each well and was then measured with a multi-well plate reader (at 450 nm/690 nm).

A cell death detection ELISA plus kit (Boehringer Mannheim; Indianapolis, IN) was used to determine the level of apoptosis by detecting fragmented DNA within the nuclei of kahweol-treated cells, sorafenib-treated cells, or cells that were treated with a combination of sorafenib and kahweol. Briefly, each culture plate was centrifuged for 10 min at 200 × g, the supernatant was removed, and the cell pellet was lysed for 30 min. Then, the plate was centrifuged again at 200 × g for 10 min and the supernatant, which contained the cytoplasmic histone-associated DNA fragments, was collected and incubated with an immobilized anti-histone antibody. The reaction products were incubated with a peroxidase substrate for 5 min and were measured by spectrophotometry at 405 and 490 nm (reference wavelength) with a microplate reader. The signals in the wells containing the substrate alone were subtracted as the background.

To evaluate the DEVDase activity, cell lysates were prepared after their respective treatments with sorafenib in the presence or absence of kahweol. Assays were performed in 96-well microtiter plates by incubating 20 μg of the cell lysates in 100 μl of reaction buffer (1% NP-40, 20 mM Tris-HCl, pH 7.5, 137 mM NaCl, 10% glycerol) containing a caspase substrate [Asp-Glu-Val-Asp-chromophore-p-nitroanilide (DVAD-pNA)] at 5 μM. The lysates were incubated at 37°C for 2 h. Thereafter, the absorbance at 405 nm was measured with a spectrophotometer.

Intracellular accumulation of ROS was determined using the fluorescent probes 2′, 7′-dichlorodihydrofluorescein diacetate (H2DCFDA) and Mitosox Red. The Caki cells were treated with sorafenib plus kahweol, and then, the cells were stained with the H2DCFDA fluorescent dye for an additional 10 min, followed by trypsinization and resuspension in PBS. The fluorescence was measured at specific time intervals with fluorescence microscope (Zeiss, NY, USA).