Colorectal cancer (CRC) is one of the most common gastrointestinal cancers and the second leading cause of cancer-related deaths worldwide [1]. Surgery is the first option for resectable tumors while chemotherapy and radiotherapy are the main treatments for advanced diseases and are the adjuvant treatments for surgical therapy in CRC patients [2, 3]. Although considerable progress has been made in screening, early diagnosis, and even individualized therapy, the morbidity of CRC is still high [4]. A study on recurrence-free survival (RFS) showed that the RFS rates were 98%, 92%, 90%, and 89% in stage II colorectal cancer patients, and 94%, 78%, 70%, and 66% in stage III patients at one, three, five, and seven years following surgery [5]. However, recurrence is much higher for curative resection, as one study demonstrated a cumulative recurrence rate of 100% at 4 years in patients with curative resection [6]. Therefore, it is important to identify new biomarkers for the early detection and prediction of relapse in CRC.

Glypican-1 (GPC1) is a cell surface protein of the heparan sulfate proteoglycan family. Previous studies have observed that GPC1 is overexpressed in the tissues for pancreatic cancer, breast cancer, and glioma [7-9]. A recent study reported that GPC1 expression was significantly upregulated in human CRC tissues [10], which is consistent with our own findings [11]. Additionally, GPC1 has been demonstrated to be specifically enriched in tumor cell-derived exosomes in pancreatic cancer, and the GPC1+ exosome was proposed as a marker for the early diagnosis of pancreatic cancer and prediction of the prognosis in pancreatic cancer patients [12]. Our previous study also demonstrated that GPC1+ exosomes were significantly increased in both the plasma and the tumor tissues of CRC patients [11], however, the clinical significance of GPC1+ exosomes in CRC patients has not yet been elucidated.

GPC1 is involved in tumor growth and angiogenesis [7-9] through the activation of FGF-FGFR signaling [13] and GPC1 expression can be suppressed by miR-96-5p in pancreatic cancer cells [14] or regulated by miRNA-149 in human endothelial cells [15]. Our recent study revealed that low miR-96-5p and miR-149 levels correlated with high GPC1 expression in colorectal cancer cells in stage I and stage II patients [11], however, the mode of regulation of these two miRNAs and whether they directly target the micro RNAs of GPC1 gene in colon cancer cells has not yet been addressed.

GPCs have been demonstrated to affect the binding properties and subsequent functions of fibroblast growth factor (FGF) and bone morphogenetic protein (BMP) [16]. BMPs are thought to induce endothelial mesenchymal transformation (EMT) in cancer cells through SMAD and non-SMAD signaling pathways [17], while fibroblast growth factor-2 (FGF-2) has been revealed to mediated EMT in corneal endothelial cells [18]. Moreover, FGF2 increased shedding of transmembrane proteins syndecan 1 (SDC1) can activate GPC1-dependent EMT signaling [19]. However, SDC1 was found to coexpress with E-cadherin during EMT in breast cancer cells [20]. We therefore hypothesized that GPC1 may induce EMT in CRC tumor cells.

Here, we investigate the clinical significance of the concentrations of circulating GPC1 positive exosomes, miR-96-5p, and miR-149 in 85 patients with stage III colon cancer, as well as the biological function of GPC1 in colon cancer cells. We then address whether circulating miR-96-5p and miR-149 is a potential biomarker for predicting the progression, prognosis, and relapse of colon cancer patients. 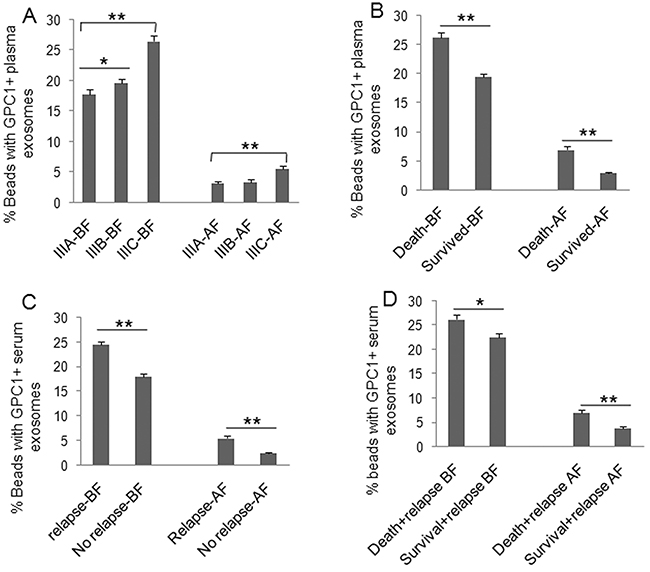 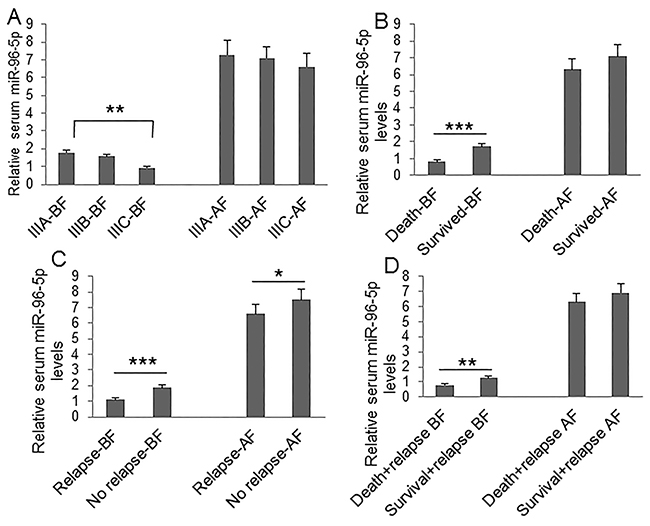 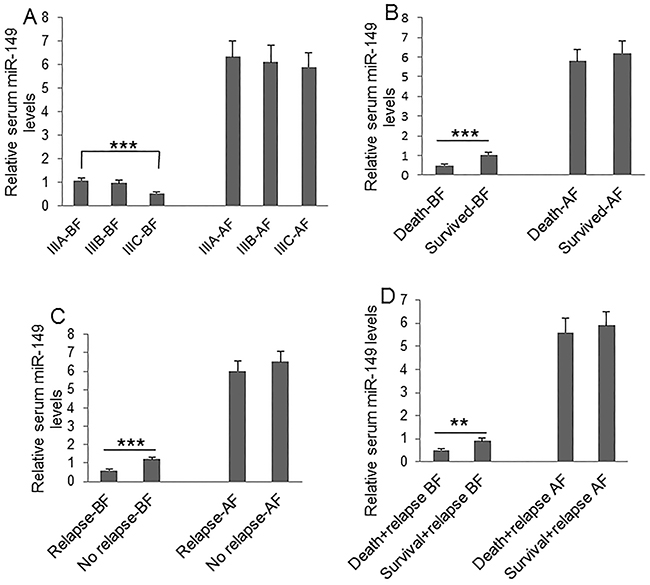 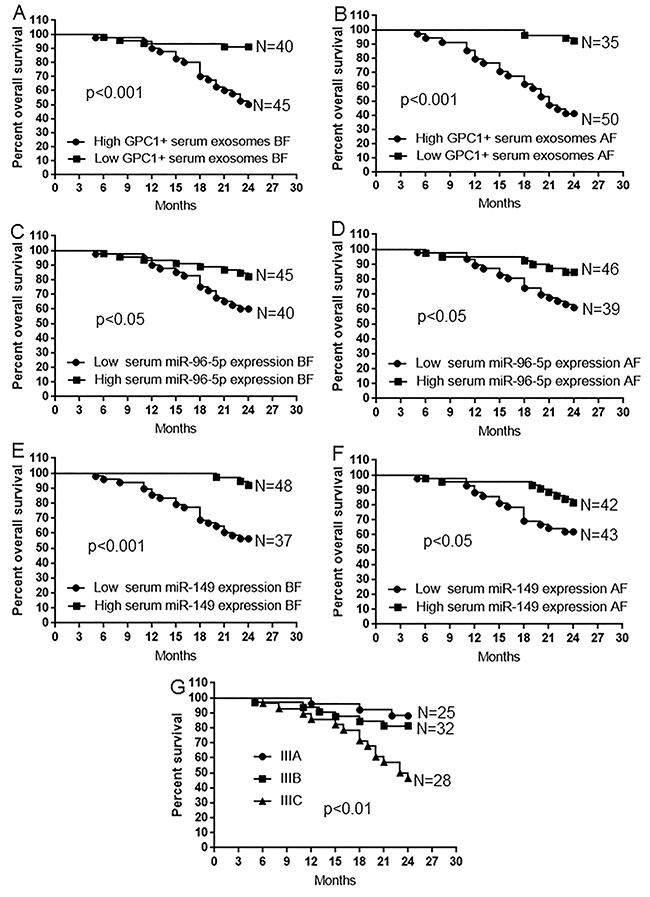 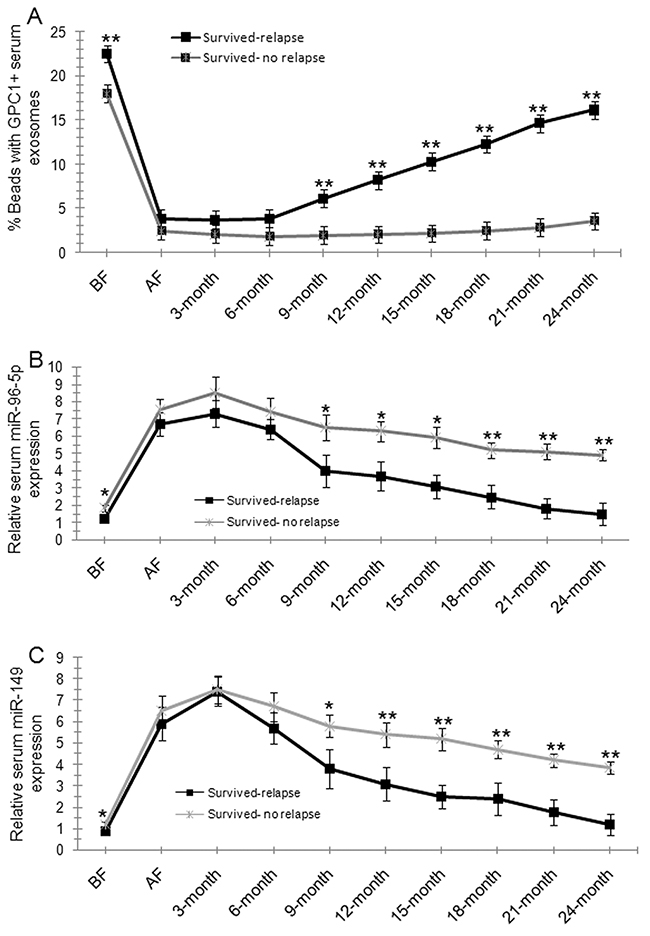 Although the regulative effect of miR-96-5p and miR-149 on GPC1 gene expression was previously implicated in colon cancer cells [11], the direct targets of these micro RNAs have not yet been identified. The direct regulation of these two miRNAs on GPC1 gene expression, the binding sites of miR-96-5p and miR-149 on the 3’-UTR of human GPC1 gene was predicted by bioinformatics (Figure 6A). The predicted binding sites were then mutated by overlap PCR (Figure 6B). We then used the dual-luciferase reporter assay system to investigate whether miR-96-5p (Figure 6C) and miR-149 (Figure 6D) regulate the expression of human GPC1 gene through directly binding to the 3’-UTR sequence. Our results show that co-transfection of pmiR-RB-GPC1-3’UTR Wt plasmid with miR-96-5p or miR-149 mimics significantly decreased luciferase reporter activity in 293T cells. In contrast, co-transfection of pmiR-RB-GPC1-3’UTR Mut plasmid with miR-96-5p or miR-149 mimics showed no significant effect on luciferase reporter activity in 293T cells. These findings suggested that miR-96-5p or miR-149 directly target human GPC1 gene at the identified targeting sequence. 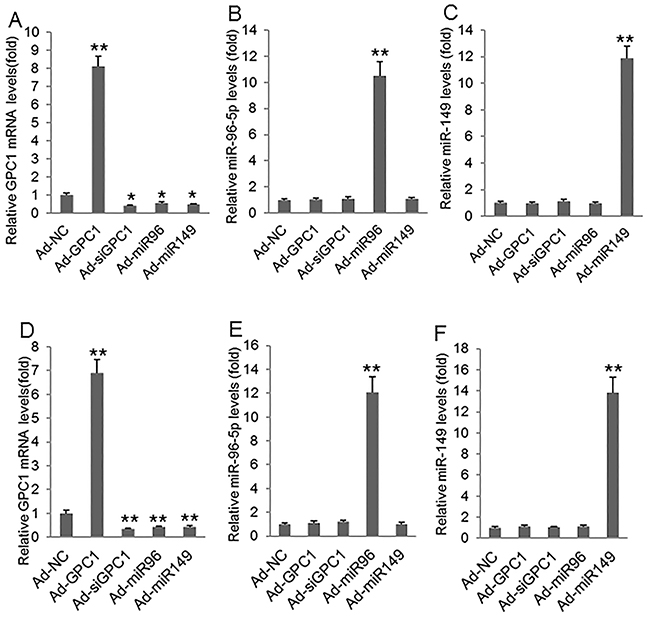 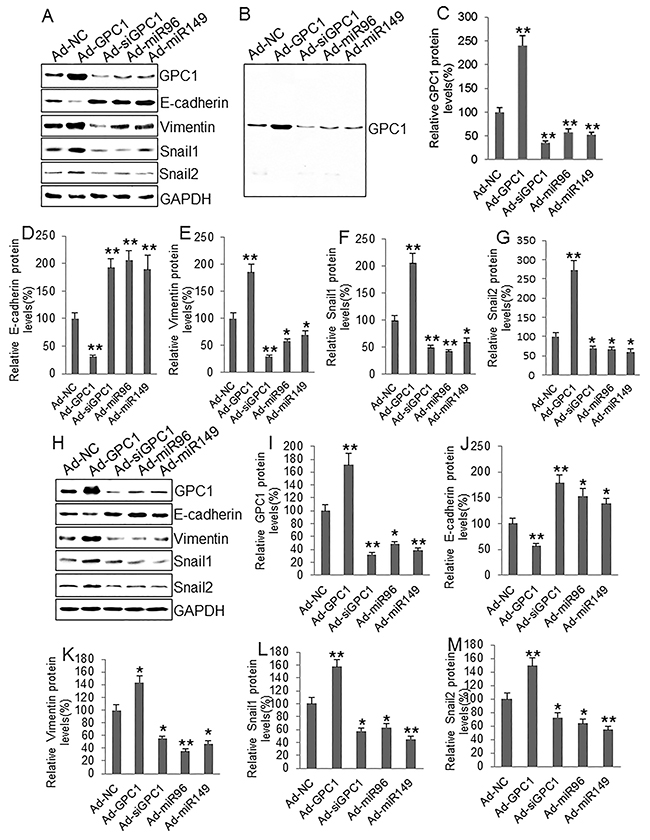 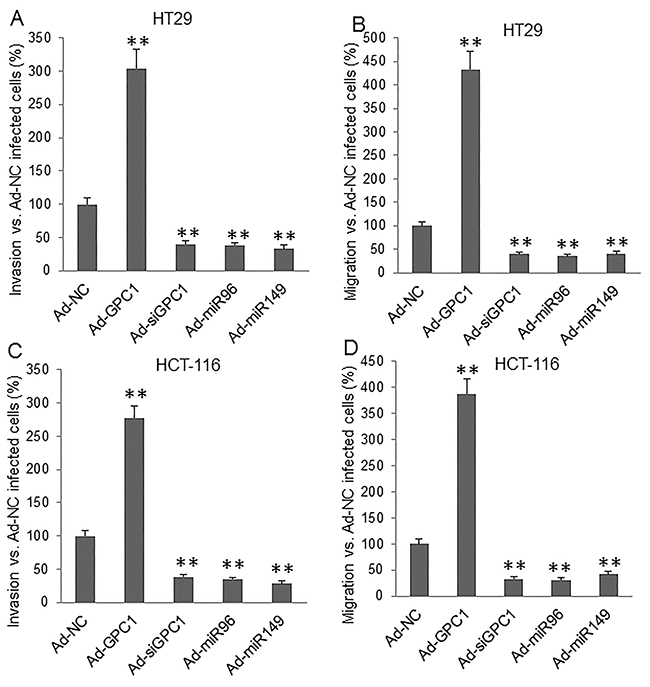 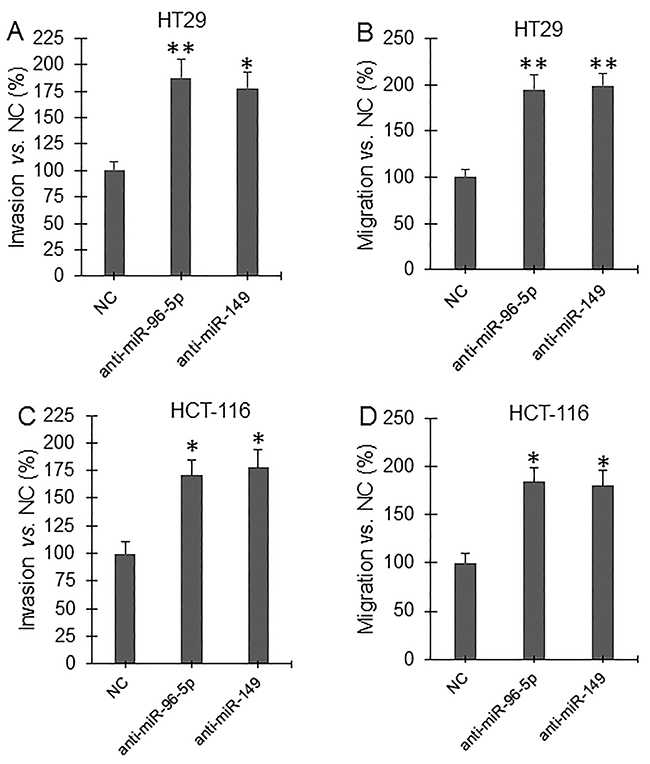 Various tumor cells secrete exosomes but the isolation of these cancer-specific exosomes is currently a challenge due to a lack of specific markers. Previously, we observed that GPC1 may be a specific marker of exosomes in cancer patients [11, 12]. We also found that a poor prognosis and relapse in stage III colon cancer patients could be predicted by the circulating GPC1+ exosomes, or the regulatory microRNA of GPC1 (miR-96-5p and miR-149). This study first demonstrated that GPC1 can activate EMT and increase invasion and migration of colon cancer cells.

We conclude that a severe clinical status, poor prognosis, and relapse in stage III colon cancer patients can be suggested by observing high circulating GPC1 positive exosomes before and after surgery as well as low circulating miR-96-5p and miR-149 before surgery. We also find that GPC1 may be involved in EMT activation, invasion, and migration of colorectal cancer cells.

This study was pre-approved by the Ethics Committee of Human Study of Xiangya Hospital and written informed consent was obtained from all patients. The study was performed in accordance with the Helsinki Declaration.

We collected 20 ml of peripheral fasting blood samples from 85 patients with stage III colon cancer one day before surgery and one week and three, six, nine, 12, 15, 19, 21, and 24 months after surgery. The blood samples were collected at Xiangya Hospital, Central South University between December, 2013 and December, 2015. These patients underwent surgical resection of primary tumor and regional lymph nodes, followed by FOLFOX 4 or 6 regimen of post surgery chemotherapy. No chemotherapy or radiotherapy was initiated before surgery. Among the 85 colon cancer patients, 48 were male and 37 were female with a mean age of 48.5 years. Of the 85 patients, 25 were TNM IIIA stage, 32 were IIIB, and 28 were IIIC disease. The patients were followed up for two years and survival information from all patients was collected by phone, email, and/or mail. Of the 85 patients, 24 survived less than two years, but 61 survived longer than two years. The patients were examined for relapse every six months. The information of relapse including local relapse and distal metastasis was collected. Among the 85 patients, local relapse and distal metastasis in liver, lung, bone, brain, etc. was found in 44 patients.

Isolation and purification of exosomes

We collected 20 ml of peripheral fasting blood samples into EDTA tubes and centrifuged at 3000 × g for 5 minutes at 4°C. The plasma was collected and immediately frozen at −80°C. Exosomes were isolated from plasma using ExoCapTM Exosome Isolation and Enrichment kit (JSR Micro Materials Innovation, Sunnyvale, CA, USA) by following the manufacturer’s protocol. The isolated exosomes were purified using sucrose density gradients as previously described [12]. The percentage of GPC1+ plasma exosomes was determined by flow cytometry. Briefly, one mg of exosomes was incubated with 300 μl of aldehyde/sulphate latex beads (Invitrogen Inc., Carlsbad, CA, USA) for 20 min at room temperature. The reaction was stopped with 100 mM glycine and 2% bovine serum albumin (BSA) in phosphate buffered saline (PBS) for 30 min at room temperature. The exosomes-bound beads were then washed with 1 × PBS containing 2% BSA and centrifuged for one min at 14,800g. The re-suspended beads were incubated with anti-GPC1 antibody (Santa Cruz Biotechnology, Santa Cruz, CA, USA) for 30 min, followed by incubation with Alexa-488-tagged secondary antibodies (Life Technologies, Carsbad, CA, USA) for 30 min at 4°C with rotation. Secondary antibody incubation alone was used as control and to gate the beads with GPC1-bound exosomes. The percentage of beads with GPC1+ exosomes was calculated.

The miRNA expression vector was constructed according to our previously published protocol [27]. The matured miR-96-5p (5’-UUUG GCACUAGCACAUUUUUGCU-3’) and miR-149 (5’-UCUGGCUCCGUGUCUUCACUCCC-3’) sequence was used for synthesizing the minigene to express the miRNA. Briefly, the minigene was cloned into the pSilencer-3.0 vector (Ambion Inc., Austin, TX, USA). The miRNA transcription cassette including the H1 promoter, miRNA minigene, and a thymidine tail was subcloned into the pShuttle vector of pEasy-1 adenovirus packaging system. To prepare an adenovirus to express siRNA of human GPC1 gene, the miRNA sequence was replaced with the siRNA sequence of human GPC1 (GCTGGTCTACTGTGCTCAC) [28]. To prepare adenovirus to overexpress the human GPC1 gene, the cDNA of human GPC1 gene was amplified by PCR from a human cDNA library using forward primer: 5’-GCGGTACCATGGAGCTC CGGGCCCGAGGC-3’ and reverse primer: 5’-GCAAGCTTGTTACCGCCACCGGGGCCTGGC-3’. The PCR product was purified, digested, and then cloned into the pShuttle vector. The adenoviruses that express GPC1 (Ad-GPC1), GPC1 siRNA (Ad-siGPC1), miR-96-5p (Ad-miR96), and miR-149 (Ad-miR149) were produced, identified, and purified as previously described [27]. As a negative control, a 22-nt sequence with no known target in the human genome was used to produce the control virus (Ad-NC) [27].

The invasion assay was performed in HT29 and HCT-116 cells using basement membrane extract (BME) according to the manufacturer’s manual (Chemicon International Inc., MA Temecula, CA, USA). Briefly, cells were infected with 10 MOI (multiple of infection) of Ad-NC, Ad-GPC1, Ad-siGPC1, Ad-miR96, and Ad-miR-149 (10 MOI) virus for 12 hrs. Cells were harvested and resuspended in basal medium at 25,000 cells/well with FGF (10 ng/ml). Cells were then added on Matrigel in the 96-well plates. After 24 hours of incubation, invasion of cells towards bottom side of the well was measured using hematoxylin staining for 10 minutes after fixed with 95% alcohol for 10 min. Cells were counted under an inverted microscope.

HT29 and HCT-116 cells were infected with 10 MOI of Ad-NC, Ad-GPC1, Ad-siGPC1, Ad-miR96, and Ad-miR-149 virus for 12 hrs. After being resuspended in basal medium, 2×105 cells/well were seeded in 24-well plates containing 8.0-μm polycarbonate membrane (Chemicon International) and FGF (10 ng/ml). The cell migration assay was performed by incubating cells at 37°C, 5% CO2 for 24 hrs. Cells at bottom of the membranes were stained and the staining was extracted into extraction buffer. The extracted buffer was calorimetrically measured at 560 nm.

The effects of anti-miRNA on cell invasion and migration