Mechanisms underlying therapy resistance of tumor cells include protein kinase Akt. Putative Akt targets include store-operated Ca2+-entry (SOCE) accomplished by pore forming ion channel unit Orai1 and its regulator STIM1. We explored whether therapy resistant (A2780cis) differ from therapy sensitive (A2780) ovary carcinoma cells in Akt, Orai1, and STIM1 expression, Ca2+-signaling and cell survival following cisplatin (100µM) treatment. Transcript levels were quantified with RT-PCR, protein abundance with Western blotting, cytosolic Ca2+-activity ([Ca2+]i) with Fura-2-fluorescence, SOCE from increase of [Ca2+]i following Ca2+-readdition after Ca2+-store depletion, and apoptosis utilizing flow cytometry. Transcript levels of Orai1 and STIM1, protein expression of Orai1, STIM1, and phosphorylated Akt, as well as SOCE were significantly higher in A2780cis than A2780 cells. SOCE was decreased by Akt inhibitor III (SH-6, 10µM) in A2780cis but not A2780 cells and decreased in both cell lines by Orai1 inhibitor 2-aminoethoxydiphenyl borate (2-ABP, 50µM). Phosphatidylserine exposure and late apoptosis following cisplatin treatment were significantly lower in A2780cis than A2780 cells, a difference virtually abolished by SH-6 or 2-ABP. In conclusion, Orai1/STIM1 expression and function are increased in therapy resistant ovary carcinoma cells, a property at least in part due to enhanced Akt activity and contributing to therapy resistance in those cells.

Cytosolic Ca2+ activity participates in the regulation of a variety of fundamental cellular mechanisms including excitation, exocytosis, migration, cell proliferation and cell death [1-5]. Mechanisms contributing to the regulation of cytosolic Ca2+ concentration include Ca2+ release from intracellular stores and subsequent activation of store operated Ca2+ entry (SOCE) or Ca2+ release activated Ca2+ channel ICRAC, which are accomplished by the pore forming Ca2+ channel subunits Orai1, Orai2 and/or Orai3 [6-10] as well as their regulators STIM1 and/or STIM2 [11-15]. Orai1 and STIM1 are expressed in tumor cells and may well contribute to the survival of therapy resistant cells [16-20].

STIM1 and Orai1 upregulate SOCE via activation of Akt/mTOR in human pulmonary arterial smooth muscle cells [21]. In addition Orai1 and thus SOCE is up-regulated in both mast cells [22] and platelets [23] by the serum & glucocorticoid inducible kinase SGK1, which counteracts Orai1 degradation by the ubiquitin ligase Nedd4-2 [22] and stimulates NF-κB dependent Orai1 transcription [24]. SGK1 targets are in large part shared by PKB/Akt isoforms [25]. Thus, it is feasible that Orai1 is similarly regulated by PKB/Akt isoforms. 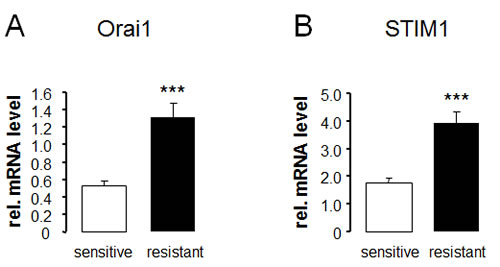 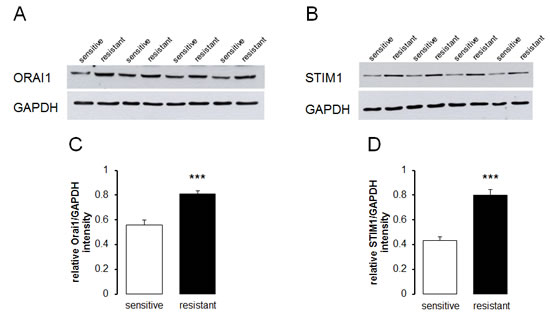 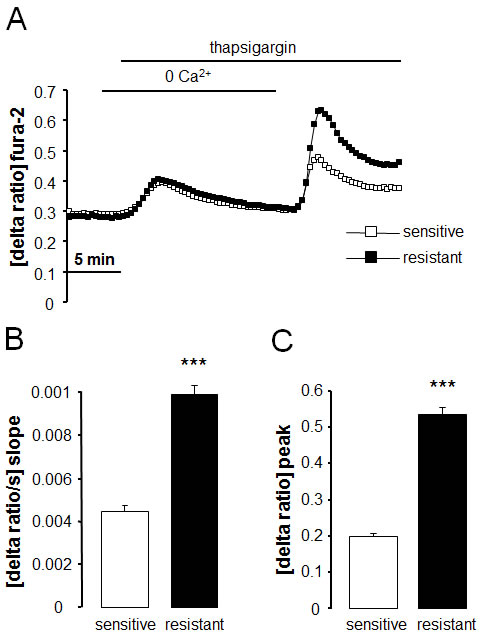 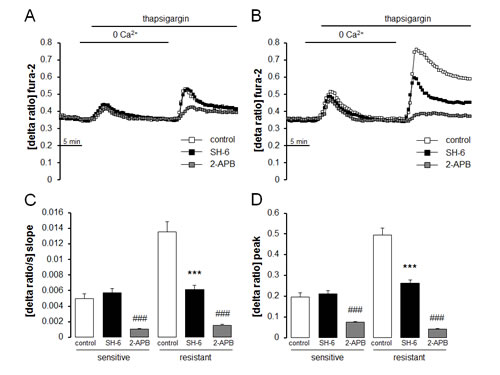 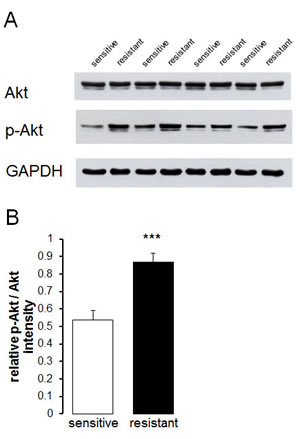 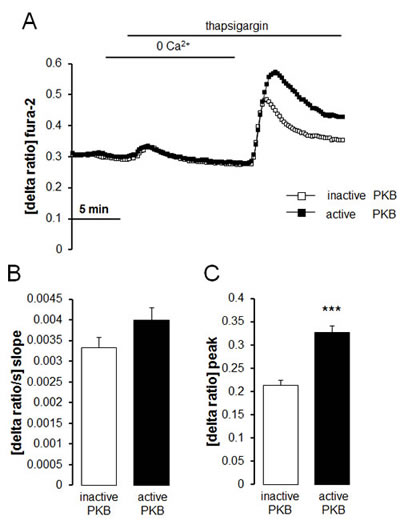 In order to test whether Akt sensitive regulation of Orai1 influenced the sensitivity of the ovary carcinoma cells to therapy, the effect of cisplatin on apoptosis of therapy sensitive A2780 and therapy resistant A2780cis cells was tested in the absence and presence of either Akt inhibitor SH-6 or Orai1 inhibitor 2-aminoethoxydiphenyl borate (2-APB). As illustrated in Fig. 7 and Fig. 8, A2780cis cells were resistant to apoptosis induced by cisplatin when compared with sensitive cells. Both SH-6 (10 µM) and 2-ABP (50 µM) restored cisplatin sensitivity of resistant cells significantly to levels comparable with those observed in sensitive cells. 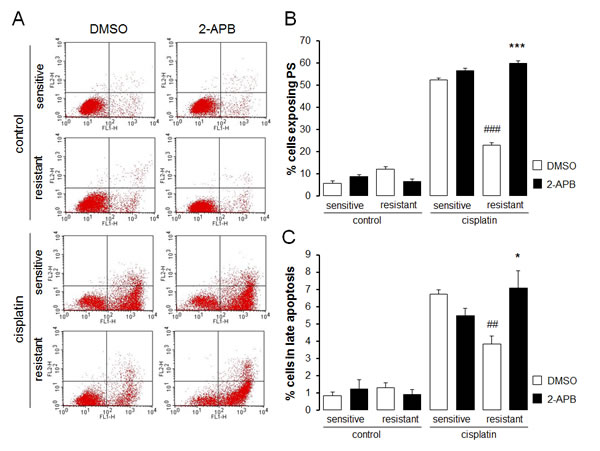 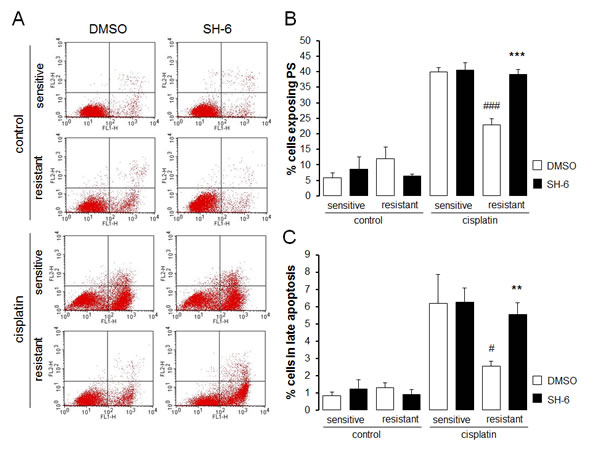 Ample evidence has previously been gathered on a role of Akt1 in stimulation of proliferation, inhibition of apoptosis and establishment of therapy resistance [54-62]. Interestingly, Akt1 phosphorylation has previously been shown to be suppressed by SOCE and to be up-regulated by inhibition of Orai1 expression [63]. Thus, the mutual regulation of Akt1 and Orai1 may be part of a negative feedback.

Experiments were performed in cisplatin-resistant cells (A2780cis) and their therapy sensitive parent cell (A2780) (ECACC catalogue no. 93112519). A2780cis has been generated by exposure to increasing concentrations of cisplatin and is further resistant to melphalan, adriamycin and irradiation [90-92]. The cells were cultured in Dulbecco’s RPMI media, containing 10% fetal calf serum and 1% antibiotic/antimycotic solution.

Total RNA was extracted from ovary carcinoma cells in TriFast (Peqlab, Erlangen, Germany) according to the manufacturer’s instructions. After DNAse digestion reverse transcription of total RNA was performed using Transcriptor High Fidelity cDNA Synthesis Kit (Roche Diagnostics, Penzberg, Germany). Real-time polymerase chain reaction (RT-PCR) of the respective genes were set up in a total volume of 20 µl using 40 ng of cDNA, 500 nM forward and reverse primer and 2x GoTaq® qPCR Master Mix (Promega,Hilden, Germany) according to the manufacturer’s protocol. Cycling conditions were as follows: initial denaturation at 95°C for 2 min, followed by 40 cycles of 95°C for 15 sec, 58°C for 15 sec and 68°C for 20 sec. For amplification the following primers were used (5`->3`orientation):

Specificity of PCR products was confirmed by analysis of a melting curve. Real-time PCR amplifications were performed on a CFX96 Real-Time System (Bio-Rad) and all experiments were done in duplicate. The house-keeping gene Tbp (TATA binding protein) was amplified to standardize the amount of sample RNA. Relative quantification of gene expression was achieved using the ΔCT method as described earlier [93, 94].

To determine apoptosis, 105 cells/100μl in complete DMEM were incubated in 70% ethanol (molecular grade, Sigma) on ice for 30 minutes, centrifuged at 1600 RPM for 3 minutes at 4oC, added to 200μl of hypotonic buffer (0.1% sodium citrate, 0.1% triton X-100, 2mM CaCl2, 20U/ml RNAse A in deionized water) together with 24μl/ml Annexin V FITC (Mabtag, Germany) and 50 μg/ml propidium iodide (Mabtag, Germany) as well as incubated on ice in the dark for 60 minutes. The cells were washed once at 1600 RPM for 3 minutes, resuspended in PBS-1% BSA and measured immediately with an excitation wavelength of 488 nm and an emission wavelength of 530 nm (FL-1) versus 585 nm (FL-2) with flow cytometry [100] utilizing a FACS Calibur (BD, Heidelberg, Germany).

Data are provided as means ± SEM; n represents the number of independent experiments. All data were tested for significance using Student’s unpaired two-tailed t-test, one sample t-test or ANOVA (Dunnett’s test), where applicable. Results with p<0.05 were considered statistically significant.

The authors acknowledge the meticulous preparation of the manuscript by Ali Soleimanpour and the technical support by Elfriede Faber.

This study was supported by the Deutsche Forschungsgemeinschaft, GRK 1302, SFB 773 and the Open Access Publishing Fund of Tuebingen University.

S.Sch., Gui.L., Guo.L., W.Y., S.H., and S.P. executed the experiments, S.Sch. and C.S. analyzed the data, F.L. designed the study, drafted the manuscript and critically discussed the observations. All authors read and approved the manuscript.

27. Berra-Romani R, Mazzocco-Spezzia A, Pulina MV and Golovina VA. Ca2+ handling is altered when arterial myocytes progress from a contractile to a proliferative phenotype in culture. Am J Physiol Cell Physiol. 2008; 295(3):C779-C790.

34. Prevarskaya N, Ouadid-Ahidouch H, Skryma R and Shuba Y. Remodelling of Ca2+ transport in cancer: how it contributes to cancer hallmarks? Philosophical transactions of the Royal Society of London Series B, Biological sciences. 2014; 369(1638):20130097.

56. Martelli AM, Tabellini G, Bortul R, Tazzari PL, Cappellini A, Billi AM and Cocco L. Involvement of the phosphoinositide 3-kinase/Akt signaling pathway in the resistance to therapeutic treatments of human leukemias. Histol Histopathol. 2005; 20(1):239-252.

89. Ohkubo T and Yamazaki J. T-type voltage-activated calcium channel Cav3.1, but not Cav3.2, is involved in the inhibition of proliferation and apoptosis in MCF-7 human breast cancer cells. International journal of oncology. 2012; 41(1):267-275.