2 Department of Dermatology and Skin Science, University of British Columbia, Vancouver, BC, Canada

Mycosis fungoides (MF) often mimics the common chronic inflammatory skin diseases and is difficult to be diagnosed with certainty, partly because of the lack of well-characterized molecular markers. Previously, we discovered that TOX, a key T cell development regulator,was aberrantly over-expressed in early stage MF. In the current multi-center study involving two independent patient cohorts, we determined the prevalence of TOX over-expression in the full spectrum of MF skin biopsies, and tested if TOX expression levels correlated with long term clinical outcomes. We examined TOX expression levels in 113 MF biopsies. We found that the MF biopsies expressed higher TOX mRNA than the controls in both cohorts (17.9 fold in cohort 1, P = 0.002; 5.8 fold in cohort 2, P < 0.0001). In addition, thicker skin lesions such as plaques and tumors expressed even higher TOX levels than thinner patches. Further, TOX over-expression differentiated MF from the controls (area under the curve [AUC]=0.87, P < 0.0001). Finally, high TOX mRNA levels correlated with increased risks of disease progression (P = 0.003) and disease-specific mortality (P = 0.008). In conclusion, TOX may be a useful marker for improving MF diagnosis and prognostication.

The incidence of cutaneous T cell lymphoma (CTCL) is 6.4 per million and rising, making it the second most common extranodal non-Hodgkin lymphomas [1, 4]. Characterized by clonal accumulation of post-thymic T cells residing in the skin [2], CTCL represents a group of diseases that are heterogeneous in clinical presentation and prognosis. The most common variants are mycosis fungoides (MF) and Sézary syndrome (SS), two distinct but related diseases, together representing more than 80% of CTCL[2-4]. In the early disease stages, which can last several years, MF presents as flat erythematous skin patches resembling benign inflammatory dermatoses (BID), such as allergic contact dermatitis, eczema, or psoriasis; whereas in the later stages, MF cells gradually form plaques or tumors, and may disseminate to the lymph nodes and internal organs. The cancerous cells in some patients may appear in the peripheral blood, a hallmark of the leukemic stage of CTCL[2].

At present, it is difficult to accurately diagnose MF. The current approach combines clinic-pathological features in three categories: compatible clinical presentations, compatible pathologic features, and presence of T cell receptor (TCR) gene clonal rearrangements (International Society of Cutaneous Lymphomas ISCL Criteria, 2005) [5]. However, these features are not universally or exclusively present in MF. This is particularly true for early stage MF (eMF), which has clinical, histological, and even molecular (including TCR clonality) resemblance to common benign inflammatory skin diseases [5-8]. Further, eMF skin lesions contain only a small number of malignant cells admixed with a large number of reactive CD4+ T cells. As a result, diagnostic delays in MF are common, which can occasionally exceed a decade.

In a recent study focusing on gene markers of eMF, we identified 19 genes that were highly enriched in eMF skin biopsies, compared with benign control biopsies. The most enriched gene in eMF biopsies is TOX[11], a critical nuclear factor regulating thymocyte lineage commitment. The aberrant TOX expression in MF was subsequently confirmed in early as well as more advanced disease of MF by in a small patient population (N=15)[12]. These studies raised the possibility that TOX could be used as a marker for MF diagnosis and prognostication.

The aim of the current study is to test this possibility. We examined the expression level of TOX in 113 MF skin biopsies from two independent MF cohorts, including 59 patients for whom long term clinical outcome data, such as disease progression and survival, are available. We found that TOX was aberrantly over-expressed in the majority of MF skin lesions in both cohorts, and that higher TOX expression levels correlated with increased risks of disease progression and disease-specific mortality.

A total of 149 individuals contributed skin biopsies, including 113 with MF (summarized in Table 1), 25 with BID, and 11 with healthy skin (HS).

Table 1: Demographics and clinical characteristics of patients with MF (N=113) 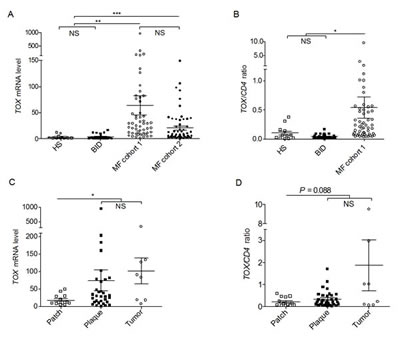 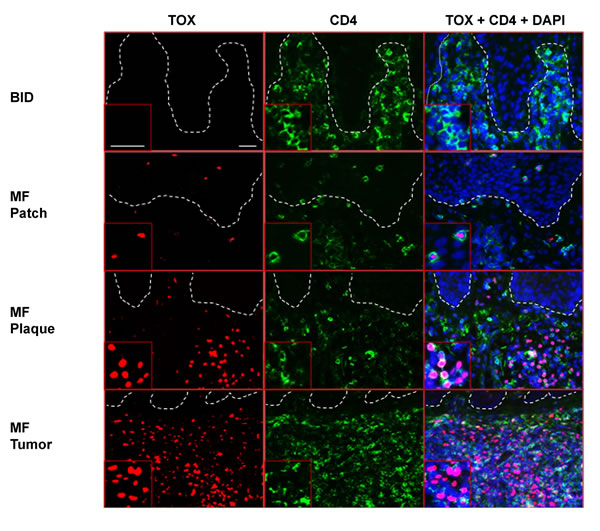 We next applied receiver operating characteristic (ROC) curve to evaluate if increased TOX mRNA levels could differentiate MF from non-MF controls. As shown in Figure 3, TOX mRNA levels had good discriminatory power for MF, demonstrated by an area under the curve (AUC) value of 0.87 (95% confidence interval (CI) =0.81-0.94, P < 0.0001, Figure 3A). When cutoff was set at 2.99, TOX mRNA levels had 90.3% sensitivity and 75.0% specificity for MF.

To test if TOX expression in MF skin biopsies influences disease progression and disease-specific mortality, we evaluated MF cohort 2, for whom clinical outcome data are available for up to 6 years (median follow up time = 45 months). Kaplan-Meier curves showed that high TOX mRNA levels in skin biopsies were associated with much increased likelihood of disease progressing into a higher clinical stage during the follow up period (P = 0.003, Figure 4A). Meanwhile, those cases with low TOX expression had very low tendency to progress clinically during the follow up period. Through multivariate testing, we found that high TOX expression remained significantly associated with disease progression, after adjusting for stage, age, and sex (hazard ratio (HR) = 2.62, P = 0.028, Table 2). 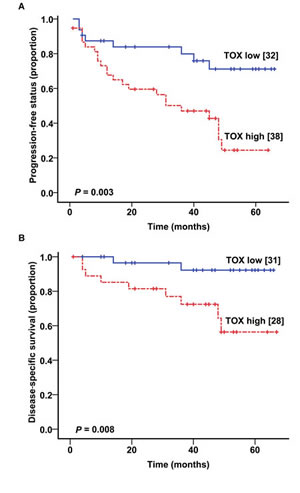 The earliest evidence of aberrant TOX expression in MF came from our previous transcriptome analysis focusing on eMF, which showed that eMF CD4+ T cells, but not CD4+ T cells in BID, over-expressed TOX at both mRNA level and protein level[11].

TOX encodes a nuclear protein of the high-mobility group (HMG) box superfamily. It contains a DNA-binding domain, which allows it to regulate transcription by modifying local chromatin structure and modulating the formation of multi-protein complexes [13, 14]. In mouse models, TOX was reported to be essential for the proper development of CD4+ thymocyte [13, 15]. Tightly controlled in a stage-specific manner in developing thymocytes, TOX is down-regulated before T cells exit the thymus, and remains suppressed in the peripheral lymphoid tissues [13]. Despite its rapid induction by pre-TCR and TCR signalling in immature thymocytes, TOX is not induced by TCR signalling in mature T cells[13]. Hence its up-regulation in eMF lesional CD4+ T cells is unlikely to be a result of T cell activation. Rather, this unusual observation led us to propose that TOX is a disease marker with diagnostic and/or prognostic value for MF.

This study tested and confirmed our hypothesis. Our findings not only confirmed TOX expression in eMF, but also demonstrated that TOX ectopic expression is a common feature across the entire spectrum of MF. Moreover, high TOX mRNA levels effectively differentiate MF, both as a whole and for stage-I MF alone, from benign inflammatory or healthy skin. Finally, high TOX expression strongly correlated with worse prognosis, including increased disease progression and disease-specific mortality.

MF clinically resembles the far more common, but clinically benign skin inflammatory diseases such as CD, psoriasis, and cutaneous reactions to drugs. Differentiating MF from these benign conditions is difficult, largely due to the lack of well-defined molecular markers in the clinical setting. Although CD2, CD3, CD5, and CD7 deficiency is included in ISCL criteria to define early MF, the loss of CD2, CD3, and/or CD5 in T cells is only 10% sensitive, despite its 100% specificity. CD7 deficiency is about 40% sensitive and 80% specific in general [5]. Therefore better markers with higher sensitivity and specificity are needed. Although a small number of markers have been reported for MF skin biopsies, including loss of CD13, ectopic expression of BLK gene, microRNAs (including miR-155, miR-203 and miR-205) [16-18], BCL7A loss [19, 20], enhanced AHI1 [21], and CD158K/ KIR3DL2 in transformed advanced MF [22], few of these markers were tested in multicenter studies, or used in a clinical setting.

In light of these, the current multicenter study consisting of patients with diverse ethnic origins demonstrated considerable potential of TOX to improve management for MF. Kaplan-Meier curve analysis demonstrated that MF lesions, including early MF lesions, that contain no or low TOX mRNA expression had little tendency of disease progression or MF-related death. TOX as a marker can identify these low-risk patients for whom conservative management perhaps would be adequate rather than being subjected to more toxic treatments, such as topical nitrogen mustard, or carmustine. In contrast, MF patients with high levels of TOX expression may benefit from early and more aggressive treatment to prevent disease progression and to reduce MF-related mortality.

Despite the predictive potential of TOX for MF demonstrated in this study, caution needs to be taken while interpreting its clinical usefulness. Due to the rarity of this disease, only a moderate sample size of 113 can be reached from three study centres from three countries. Additional confirmation in other centres is warranted to uncover the true clinical relevance of TOX for MF diagnosis and prognostication.

Notwithstanding this limitation, the multicenter nature of our study underscores the consistency of TOX up-regulation in patients from diverse ethnical and geographic backgrounds. Furthermore, TOX as a marker is highly robust and user-friendly, since it can be detected by a number of routine dermatopathologic tools, such as qPCR, IF, and immunohistochemistry staining.

Given TOX’s critical regulatory role in CD4+ T cell development and its aberrant over-expression in the majority of MF skin lesion, it is highly likely that TOX activation plays a pathogenic role in MF. Further studies are therefore warranted to evaluate if TOX ectopic expression contributes to the development of MF. If proven to be true, TOX may emerge as a novel therapeutic target for MF in the future.

In summary, TOX ectopic expression is readily and frequently detected in the malignant CD4+ T cells in MF skin biopsies, including the most challenging eMF. Moreover, increased TOX expression levels define a group of MF patients with increased risk of disease progression and disease-specific mortality. Therefore, characterization of TOX expression status of MF patients may be valuable not only for diagnostic confirmation but also for guiding MF management in the future.

With approval from institutional clinical ethics board, this study was conducted according to Declaration of Helsinki Principles, and all participants has provided their written informed consent. Two MF cohorts were examined in this study (Table 1). Cohort 1 was prospectively recruited from Vancouver Canada and Beijing China from 2008-2012, including 54 subjects with MF (cohort 1, N=54) recruited from the Skin Lymphoma Clinics of British Columbia Cancer Agency (BCCA, Vancouver, Canada, N=26), and Peking University First Hospital (Beijing, China, N=28). In addition, 25 individuals with BID (9 psoriasis, 13 CD, and 3 pityriasis rubra pilar) and 11 volunteers with HS were recruited from the outpatient dermatology clinic of University of British Columbia (UBC, Vancouver, Canada). Cohort 2 of MF patients (cohort 2, N=59) was collected from Harvard University with institutional approval and had been well-characterized previously[20, 21, 26, 27]. The diagnosis and clinical staging were established according to the diagnostic criteria of CTCL[7].

Preparation of clinical samples and analyses of TOX mRNA and protein

Continuous variables were compared by two-tailed t tests. ROC method was used to analyze the sensitivity and specificity of TOX mRNA levels to differentiate MF from BID or HS skin biopsies.

X-Tile software, a marker cutpoint analysis tool developed by Camp RL et al[28], was applied to determine the optimal cut-point for TOX expression level as 8.2 (Miller-Siegmund corrected P value=0.027). In our analysis of disease progression and disease-specific mortality, TOX high and TOX low groups were defined by the expression levels higher or lower than 8.2, respectively.

MF patients were considered to experience disease progression when disease progressed to more advanced clinical stages (i.e. beyond stage I) and/or death due to MF during the follow up period[20]. Individuals with multiple progressions (n > 1) were counted as n progression events. Survival time was defined as the duration from the date of sample collection to death.