Lymph nodes posterior to the right recurrent laryngeal nerve (LN-prRLN) are common sites of nodal recurrence after the resection of papillary thyroid carcinoma (PTC). However, the indication for LN-prRLN dissection remains debatable. We therefore studied the relationships between LN-prRLN metastasis and the clinicopathological characteristics in 306 patients with right or bilateral PTC who underwent LN-prRLN dissection. We found that LN-prRLN metastasis occurred in 16.67% of PTC and was associated with a number of the clinicopathological features. The receiver-operator characteristic (ROC) analysis showed that the areas under the ROC curves for the prediction of LN-prRLN metastasis by the risk factors age < 35.5 years, right tumor size > 0.85 cm, lymph node (right cervical central VI-1) number > 1.5, metastatic lymph node (right cervical central VI-1) size > 0.45 cm, and lymph node number in the right cervical lateral compartment > 0.5 were 0.601, 0.815, 0.813, 0.725, and 0.743, respectively.

In recent years, thyroid cancer has exhibited the rapidest increase in incidence among solid tumors. This increase is mainly due to an increase in papillary thyroid carcinoma (PTC) [1], which has also resulted in a significant increase in surgical treatment for PTC. However, the lack of a standardized and uniform surgical approach may lead to the postoperative relapse of thyroid cancer, which requires at least 1 additional surgery. Furthermore, the reoperation may increase thyroid tumor dedifferentiation as well as the difficulty and risk of the surgical procedure. Particularly, the incomplete resection of the lymph node posterior to the right recurrent laryngeal nerve in the first surgery can make the residual lymph nodes difficult to excise in the second surgery and even render the complete excision impossible. In this situation, patients who should have had a chance to be cured may thus lose the opportunity [2].

The guideline of the American Thyroid Association (ATA) has outlined the anatomic boundaries of the central neck dissection for thyroid cancer to establish uniformity among all surgeons performing this procedure [3]. While the terminology has now be standardized, controversy remains regarding to the surrounding treatment indication for LN-prRLN in PTC and even the names of the dissection procedure. Some researchers have suggested that routine LN-prRLN dissection is not necessary because of the low metastasis rate of LN-prRLN, the relatively high difficulty of dissection, and the high complication rate [4–10]. Therefore, we designed this prospective study to investigate the clinical value and indication for LN-prRLN dissection in PTC.

Correlation between LN-prRLN metastasis and the clinicopathological characteristics of PTC

b178 samples were subjected to a BRAF V600E test

c92 patients with L-VI were resected

In the present study, the duration of follow-up of all patients ranges from 20 months to 38 months. All patients have their blood parathyroid hormone and calcium levels assayed to assess the post-operative parathyroid function. There was no permanent hypoparathyroidism, which was defined as persistently low blood calcium levels (< 2 mmol/L) and subnormal parathyroid hormone levels by 6 months after surgery. The presence of RLN injury was determined by reviewing the surgical records and postoperative laryngoscopy reports. Four patients developed transient recurrent laryngeal nerve (RLN) paralyses and recovered within 2 months of surgery, 2 patients exhibited pleura rupture (which was recognized during surgery and repaired), and 5 patients developed chylous leak which resolved within 2 weeks of surgery. Horner’s syndrome was not observed in this study, and none of the patients developed recurrence.

Approximately 30% to 80% of patients with PTC present with cervical lymph node metastases at the time of diagnosis, and the cervical lymph node metastasis rate in microcarcinoma is as high as 47.6% [11–12]. The LN-prRLN is not uncommon sites of nodal recurrence in PTC [5, 10, 13]. In this study, we found 16.67% of PTC with the LN-prRLN metastasis, which falls into the range of the metastatic rate (11.38%–26.67%) reported previously [5–8]. To this end, we have recruited 306 PTC cases to identify the potential factors that can be used as the indication for LN-prRLN dissection. Specifically, a univariate analysis followed by the multivariate logistic regression analysis indicated a significant correlation between LN-prRLN metastasis and several risk factors.

A comprehensive analysis of TSH concentration, TNM stage, previous concomitant thyroid disorders, and lymph node metastasis in the left cervical compartment was conducted in all 306 patients enrolled in this study. The statistical analysis did not identify correlations between any of these factors and LN-prRLN metastasis (P > 0.05). In this study, the rate of BRAF V600 mutation was 82.58% (147/178), which was consistent with the 29–83% mutation rate reported in the literature [14]. Li et al reported that BRAF mutations in PTC may predict cervical lymph node metastasis [15]. However, our study showed that the mutation rate was 77.50% (31/40) in patients with LN-prRLN metastasis and 84.06% (116/138) in patients without LN-prRLN metastasis, and these rates did not significantly differ (P = 0.336). The disparity between our study and Li’s may be due to the relatively small sample size in our study.

At present, the boundaries of LN-prRLN dissection has not been clearly defined. According to this study and our clinical experience, we define the area posterior to the right RLN segment between laryngeal entry point and the intersection of the RLN with the innominate artery as the range of LN-prRLN dissection. Some researchers do not include the area above the level of the inferior thyroid artery in their LN-prRLN dissection to avoid injury of the right superior parathyroid and the associate blood supply [2]. However, this region usually includes some lymph nodes. If the nodal relapse does occur in these left-behind lymph nodes, it will be even more difficult to preserve the parathyroid gland and its blood supply in revision surgery. Actually, the parathyroid and its vessels can be protected from surgical injury if a careful and fine dissection is performed in the primary dissection. The right lower parathyroid and its vessels can be preserved at the anterior-lateral sheath of the common carotid artery during right cervical central VI-1 dissection and should not be easily injured in the right cervical central VI-2 dissection. The intersection between the innominate artery and the tracheoesophageal groove, which is close to the right lung apex and apical pleura, is defined as the inferior boundary of the right cervical central VI-2 subzone. Some black and dust-catching lymph nodes usually present in this area and downward toward the mediastinum. Therefore, the dissection that reaches the level of the innominate artery or the right apical pleura is sufficient. Adipose tissue dissection in the right cervical central VI-2 subzone should be carefully performed in anatomic layers while protecting the trachea and esophagus, and the prevertebral fascia should be kept intact. Traction and electrical cautery burns on the RLN should be avoided, and the capillaries on the surface of the RLN should be preserved. Complete lymphatic and adipose tissue dissection can result in a variety of complications such as RLN injury, pleura rupture, chylothorax, and Horner syndrome, because of the deep and narrow working space in the right cervical central VI-2 subzone. Therefore, an experienced surgeon is required for this thyroid surgery.

In the present study, no patient suffered permanent hypoparathyroidism or Horner’s syndrome following surgery, but 1.3%, 0.7%, and 1.6% of patients developed RLN injury, pleura rupture, and chylous leak, respectively. Overall, the rate of surgical complications was very low in this study. Pleura rupture was identified during surgery and repaired immediately, and patients with chylous leak and transient RLN injury recovered within 2 - 4 weeks of surgery. Therefore, we conclude that LN-prRLN dissection is safe and feasible under experienced hands.

A prospective study was designed as follows: 306 consecutive PTC patients (right PTC/ bilateral PTC) underwent LN-prRLN dissection conducted by a surgical team over a period of 18 months (from March 2014 to September 2015). Patients who had a history of other malignant tumors were excluded.

Among these patients, 68 were males and 238 females. 207 patients were with right PTC and 99 patients with bilateral PTC. 187 patients were diagnosed with a single lesion, and 119 with multiple lesions. A total of 224 tumors were classified as micro-tumors (diameter ≤ 1 cm) according to the WHO criteria. Furthermore, 51 patients had positive LN-prRLNs, and 255 patients had negative LN-prRLNs. Four patients presented with hyperthyroidism, 10 patients exhibited subclinical hypothyroidism, 82 patients had nodular goiters, 44 patients suffered from chronic thyroiditis, 43 patients were diagnosed with Hashimoto’s disease, and 13 patients exhibited adenoma. The study was approved by the Ethics Committees of Hangzhou First People’s Hospital, and all participants provided informed consent. 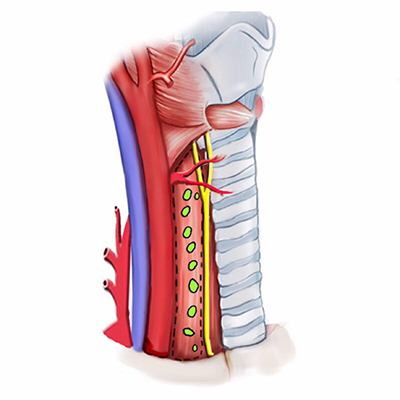 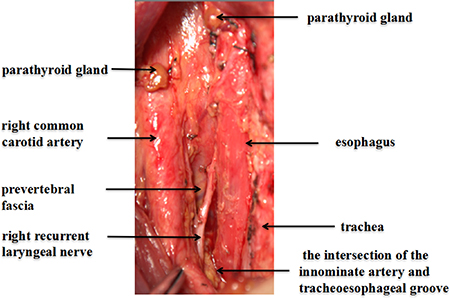 All patients in this study underwent a lymph node dissection of both right cervical central VI-1 and VI-2. Additional lateral compartment neck dissections including level II, III, IV and Vb would be performed if metastases were present in this compartment. Level I and Va lymph nodes would be spared unless there were clinically positive lymph nodes.

The cervical RLN was routinely exposed with great care to avoid traction or thermal injury. Its branches were protected as much as possible. The parathyroid was preserved in situ if possible or it would be autotransplanted if vascular supply preservation was deemed inadequate. The right apical pleura and blood vessels anterior to the vertebrae were protected. The operating surgeon would mark the lymph node subzones on the excised specimen.

Two expert pathologists independently examined the surgical specimens. Specifically, the histological type, number, size, and the presence/ absence of capsular invasion in the primary thyroid tumor were determined. Neck dissection specimens were examined and analysed according to the lymph node subzones. All subzones were carefully explored to locate all lymph nodes. When it was difficult to diagnose lymph node metastasis by routine pathological examination, the immunohistochemistry staining would be employed. The number and size of the metastatic lymph nodes were recorded.

The amplification refractory mutation system (ARMS) was used to detect BRAF gene mutations. This method can detect as low as 1% for the BRAF V600E allele in a wild-type background [16]. The reagent package (Lot number: ADx-FF01, ADx-BR01) was provided by Xiamen Ed biotechnology pharmaceutical Co., Ltd, and the test was carried out in accordance with the manufacturer’s instruction.

Statistical analysis was performed with the aid of the SPSS 20.0 statistical software. The number of harvested lymph nodes was expressed as the median (quartiles) because of its skewed distribution; the differences between groups were assessed using the nonparametric Mann-Whitney test. The chi-squared test or Fisher’s exact test was used for the univariate analysis of the clinical and pathological features and LN-prRLN. A logistic regression analysis was conducted for the multivariate analysis. ROC curves were used to assess the predictive value of potential risk factors. P < 0.05 was set as the level of statistical significance.

All authors declare no potential conflicts of interest.

This word was supported by the Key Project of Scientific and Technological Innovation in Hangzhou (20131813A08) and the Applied Research Project of Commonweal Technology in Zhejiang Province (2017C33180).