Clear cell renal cell carcinoma (ccRCC), the most common and aggressive histologic subtype of RCC [1], is a malignant kidney neoplasm that may be fatal. It is estimated that approximately 55% of RCC would be fatal within 5 years after traditional treatment [2-4], because patients are often clinically diagnosed in the advanced phase of the disease. Recently, several novelty methods which primarily rely on clinical features [5-8] and several molecular biological markers [9-12] have blossomed and been externally validated to predict the progression of cancer with metastatic disease after surgical treatment. These morphologic risk criteria are fairly simplistic to facilitate the early diagnosis of ccRCC. Some genes CNVs, especially gene deletions, have been demonstrated to affect the overall clinical outlook of ccRCC and have been used for tumor diagnosis. However, it is still limited for the early prediction of ccRCC diagnosis. Therefore, it is urgent to identify and verify novel tumor molecular markers for early diagnosis, prognosis and therapy of ccRCC.

The human multi-PDZ domain protein (MPDZ/MUPP1) gene is located on chromosome 9p22-p24 [13]. Its full-length cDNA (EMBL accession number NM_003829) has an overall length of 7722 bp and encodes a protein of 2070 amino acids containing thirteen PDZ domains (Supplementary Figure 1A). As a tight junction-associated protein, MPDZ participates in the formation of connections between epithelial cells and endothelial cells, inhibits cell polarity and is closely related to the cell’s osmotic pressure response [14-16]. Although the function of MPDZ in tumorigenesis has rarely been reported, previous research found that MPDZ was involved in the carcinogenic effect of viruses as an interaction partner for the coxsackievirus and adenovirus receptor cytoplasmic domain [17]. The expression of MPDZ in breast cancer tissue was substantially lower than that in the normal mucosa and is correlated with cancer progression and aggression [18]. Clinical association analyses indicated that MPDZ deletion is related to poor survival in nasopharyngeal carcinoma [19]. However, the clinical relevance of MPDZ genetic alterations in ccRCC has not been addressed. 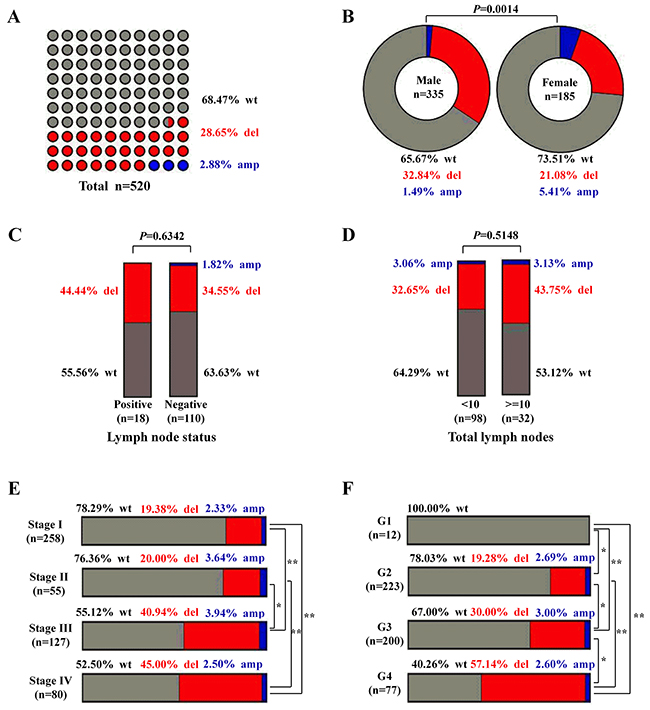 Due to the deletion of MPDZ was significantly correlated with Fuhrman nuclear grade and AJCC stage, the competing risk model was applied to survival analysis. The deletion of MPDZ is significantly associated with poor outcomes in ccRCC patients (P=0.0025; Figure 2A). A subgroup analysis by clinical stage and Fuhrman nuclear grade (G) revealed that the deletion of MPDZ was associated with overall survival in stage III-IV (P=0.0337; Figure 2C), G 1-2 (P=0.0385; Figure 2D) and G 3-4 (P=0.0052; Figure 2E), but not in stage I-II (P=0.0903; Figure 2B). We also assessed the impact of MPDZ copy number on CSS using UCSC Xena software program. Whether in copy number or copy number with a gene level database, the CNV of MPDZ is significantly associated with worse CSS in patients with ccRCC (Supplementary Figure 2A–2C). 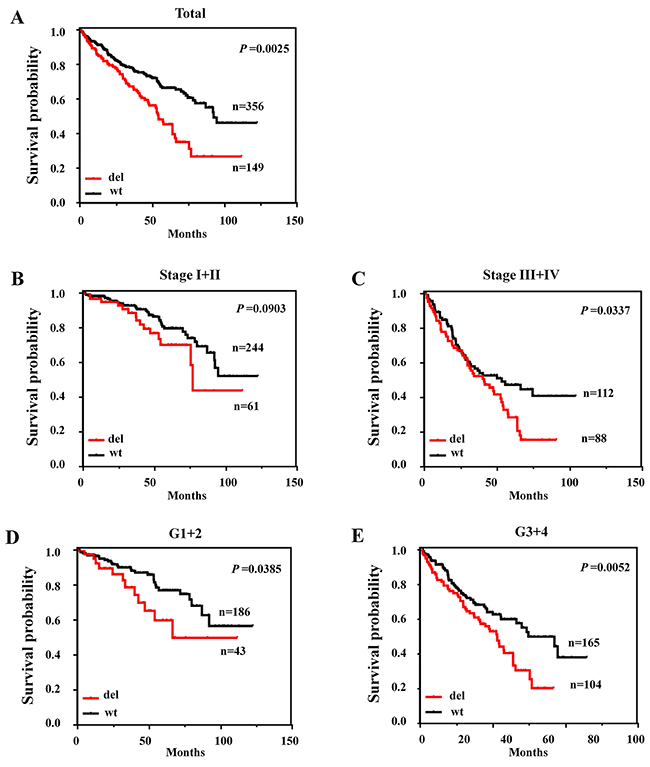 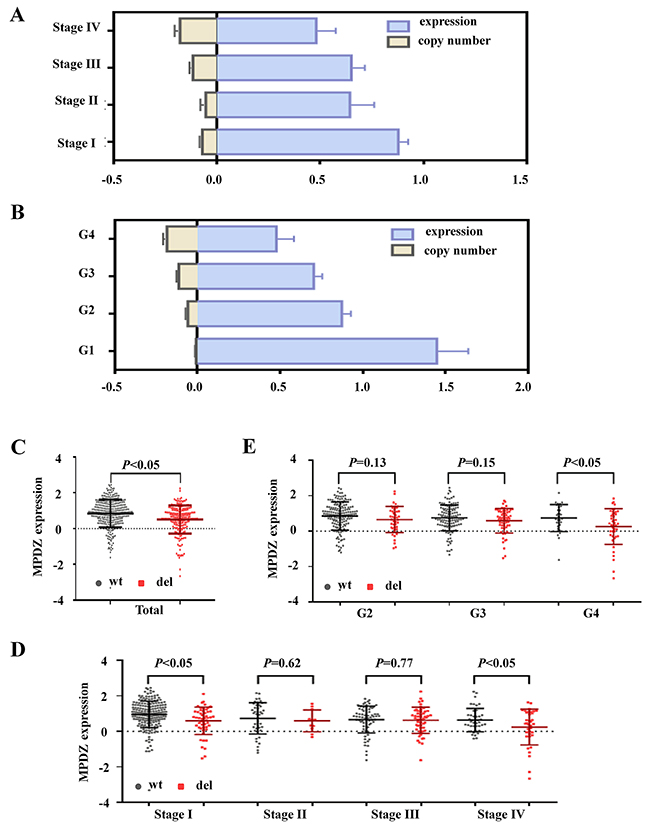 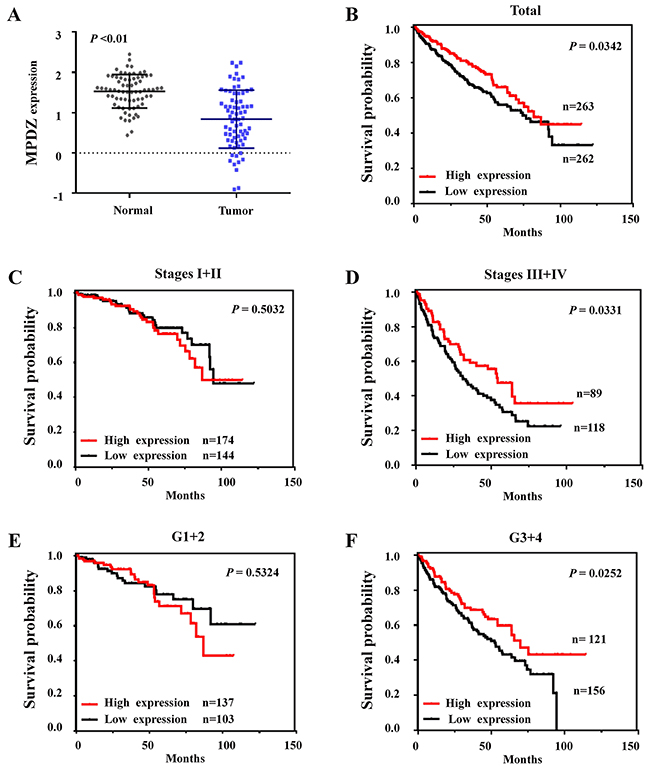 Moreover, the clinical significance of MPDZ expression in ccRCC patients was assessed by performing a meta-analysis of the association of MPDZ gene expression with outcomes among ccRCC patients. We observed that the low expression of MPDZ was significantly associated with poor survival in patients with ccRCC (P=0.0342; Figure 4B). A subgroup analysis clinical stage and Fuhrman nuclear grade (G) revealed that MPDZ was associated with overall survival in stage III-IV (P=0.0331; Figure 4D) and G 3-4 (P=0.0252; Figure 4F), but not in stage I-II (P=0.5032; Figure 4C) and G 1-2 (P=0.5324; Figure 4E). To further confirm these results, we subsequently performed a meta-analysis using the UCSC Xena software program. Consistent with our results, low MPDZ expression levels are associated with poor overall survival in ccRCC patients (Supplementary Figure 3A–3C). 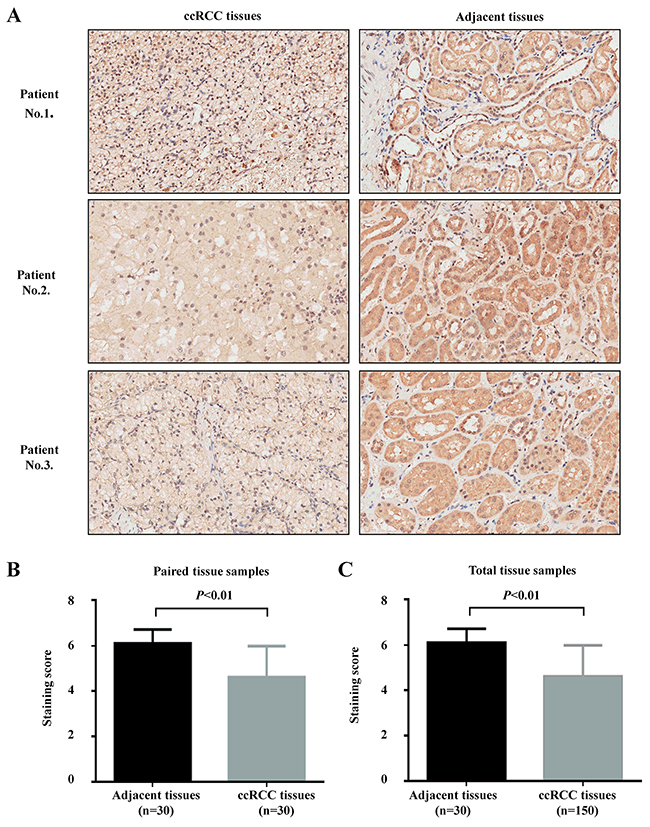 Accumulating evidence has demonstrated that predictive and prognostic markers have been proposed to distinguish between poor and favorable risk ccRCC patients [9, 11, 12]. However, these molecular markers stratified the survival curves and discriminated between stage distributions only when they are examined in the progression of ccRCC, but not in the early stage and precancerous lesions. To our knowledge, this is the first analysis on the association between the deletion of MPDZ and outcomes in patients with ccRCC. We found that MPDZ has been frequently deleted and downregulated in ccRCC tissues, which was associated with poor outcomes of ccRCC patients. Due to MPDZ is a protective factor in the renal osmoadaptive response [15, 20], the deletion of MPDZ may accelerate the progress of ccRCC under the osmotic pressure. The detection of MPDZ deletion may be a high-efficiency predictive method for ccRCC tumorigenesis.

Genetic changes by CNV play an important role in ccRCC and are probably good molecular biomarkers for diagnosis and prognosis of patients [21, 22]. Recently, CNV silencing of many novel genes that function as putative tumor suppressor genes has been reported to contribute to human cancer [23, 24]. In this study, we found that MPDZ is a typical CNV gene that commonly showed a CNV status in ccRCC. In addition, we found that there was an unusually simple mutation of MPDZ in ccRCC, which hasn’t influence on patients’ survival (Supplementary Figure 4A–4C). Because the percentage of deletion has the highest proportion in the CNV of MPDZ, much of the concern among CNV should be focused on the deletion in that the deletion of MPDZ is negatively correlated with its transcriptional expression. These genetic changes suggest that MPDZ is a potential tumor suppressor gene in ccRCC, which provides a novel tumor molecular marker for diagnosis, prognosis and therapy of patients with ccRCC.

In addition, we also observed that the deletion of MPDZ is significantly associated with poor outcomes in patients with ccRCC. However, there are few MPDZ amplifications among patients (only 15 persons from the database), which limits the statistical power because of the small sample. Accounting for the deletion is a common form in the CNV of MPDZ, and the deletion of MPDZ can decrease its expression. Thus, the del vs. wt model can be considered a conservative estimation of the impact of MPDZ on ccRCC survival. We found that the deletion of MPDZ is associated with poor outcomes in patients with ccRCC. Epigenetic silencing by DNA methylation plays an important role in many novel genes. We further analyzed the state and potential role of MPDZ methylation in ccRCC patients. Interestingly, we found that MPDZ methylation was also associated with poor outcomes in patients with ccRCC (Supplementary Figure 5). It is a potential reason for MPDZ CNV and expression data did not completely consistent, to some extent. These data are fairly straightforward in offering adequate evidence to confirm the fact that the methylation level of MPDZ is negatively correlated with its transcriptional expression. It is necessary to do further experimental research of the associations between the DNA methylation and the expression of MPDZ.

To date, the function of human MPDZ gene with several transcript variants (Supplementary Figure 1B) has not been thoroughly addressed in the literature. Most of studies associated with the function of the MPDZ gene were focused on the cytoskeleton, protein complex formation, signal transduction, cell polarity, cell osmotic pressure reactions and the causes of severe congenital hydrocephalus [14, 15, 25-27]. However, several reports showed that MPDZ participated in nasopharyngeal carcinoma and breast cancer tumorigenesis [17, 18]. However, it should be emphasized that these findings did not show that MPDZ is an independent factor for the prognosis of the tumor. Nevertheless, there is no study on MPDZ gene function in ccRCC. In the present study, we found that MPDZ was frequently deleted and downregulated in ccRCC tissues, which was associated with poor survival of ccRCC patients. Immunohistochemical analysis further certified that MPDZ was expressed at low levels in ccRCC tissues compared with the adjacent tissues. Kaplan–Meier survival curves showed that ccRCC patients with low MPDZ expression had significantly shorter survival than those with high MPDZ expression. These suggested that MPDZ is an independent factor for the prognosis of ccRCC and may play an important role in ccRCC. Interestingly, there had the positive nuclear staining of MPDZ in partly tissue samples particularly in tumor samples. Thus, further experimental research on the associations between MPDZ and ccRCC is needed. We would also study the specific mechanism of MPDZ that has different subcellular localization in cancer in future research.

In summary, our study showed that the genetic silencing of the MPDZ gene by deletions was associated with poor outcomes in patients with ccRCC. It provides knowledge regarding the deletion of MPDZ and expression variations and supports the potential role of prognostic significance, which has important clinical diagnostic and therapeutic implications in ccRCC.

The prognostic value of the MPDZ gene in ccRCC patients was analyzed using the Kaplan–Meier method. The boundaries of high and low expression of MPDZ used the median gene expression value. The competing risk method was applied for CSS analysis. The TCGA datasets to adjust for clinical covariates (AJCC stage I and II vs. III and IV and grade 1 and 2 vs. 3 and 4) used multivariate competing risk models. The classification standards of the deceased patients were according to the previous study [29]. The UCSC Xena (https://genome-cancer.soe.ucsc.edu) was also used to analyze the associations between gene expression, methylation, CNV and survival in ccRCC patients.

The relative standard errors of the mean normalized values were used for gene expression. The gene expression results between the two groups were evaluated using a two-tailed Wilcoxon test and Bonferroni corrected for multiple hypothesis testing. Spearman’s rank correlation was applied to analyze the correlation between gene expression and copy numbers. The difference in categorical variables was analyzed by Chi-square test. Multiple comparisons that a 2 × 2 contingency table of expected and observed deletion frequencies were used to analyze more than two groups, with a P-value cut-off set at 0.05 with stringent false discovery rate control (Bonferroni’s method). A two-sided P-value<0.05 was considered statistically significant. Statistical analyses were performed with the SPSS 19.0 software (SPSS, Inc., Chicago, IL, USA).