Characteristics and survival of patients with advanced cancer and p53 mutations

4 Department of Biology and Biochemistry, University of Houston, Houston, Texas

The tumor suppressor protein p53 is activated in response to a variety of stress signals to ensure genome stability in cells. The role of p53 in guarding the cell reflects its ability to act as a potent transcriptional activator, regulating the expression of genes that inhibit cell cycle progression or induce apoptosis or senescence. By eliciting cell growth inhibition, p53 functions to prevent cancer development [1]. In addition to its role in suppressing tumor growth, p53 can limit cancer progression by decreasing the invasiveness and metastatic capacity of cancer cells [2-4].

Loss of p53 function occurs frequently in human cancers and results from mutations in the p53 gene or defects in the pathway that activates p53 [1]. More than 75% of p53 mutations lead to the expression of a full-length protein with a single amino acid substitution. In most cases, these mutant p53 proteins lose wild-type functions, elicit dominant-negative effects on the remaining wild-type p53, or acquire oncogenic functions [5-7]. This gain-of-function phenotype has been characterized in in vivo studies. Mice that carry mutant p53 develop different types of tumors with more invasive phenotypes than the p53-null mice in which the p53 protein is not expressed [6, 8]. In addition, the analysis of cell culture models has identified several oncogenic properties of mutant p53, including its ability to promote migration, invasion, angiogenesis, and chemoresistance [2-4, 7, 9, 10]. The single amino acid substitutions in the p53 protein are divided into two broad classes: structural and contact DNA mutations. Most of the point mutations, including those at amino acids R175, G245, R248, R249, R273 and R282, tend to cluster at hot spots within the DNA-binding domain. Contact hot spot mutations lead to the loss of DNA binding activity and subsequent alterations in the transcriptional activity of p53. Structural hot spot mutations cause unfolding of the p53 protein that affects its interaction with other proteins. Mutant p53 has been shown to elicit its oncogenic actions by interacting with and inhibiting its family members, p63 and p73. Mutant p53 is known to alter the expression of p63 target genes, and this has been associated with enhanced invasive behavior [7]. In addition, oncogenic mutations that activate the Ras signaling pathway inhibit the function of p63 by promoting its interaction with mutant p53. By regulating the activity of mutant p53, oncogenic Ras induces the development of prometastatic phenotypes[11, 12].

Several studies have investigated the importance of p53 mutation status in predicting clinical outcome in various types of cancer. Some of the p53 mutations have been correlated with shorter survival or a poorer response to treatment in several cancers[13]. In addition, some mutations were correlated with worse survival than other mutations. For example, mutations in the DNA-binding domain of p53 have been associated with worse prognosis and poorer response to chemotherapy [14].

We have previously reported the clinical characteristics and response to standard systemic therapy of 145 patients with documented p53 mutational status (n=66 mutated vs. n=79 wild-type tumors) who were referred to our department for participation in Phase I clinical trials[15]. In the current study, we assessed the frequency of various p53 mutations and their effects on clinical outcomes in a larger number of patients with advanced cancer who were referred for treatment to the Phase I Clinical Trials Program at The University of Texas MD Anderson Cancer Center. We also evaluated the impact on clinical outcomes of additional targetable aberrations in patients with and without p53 mutations.

No difference between the two groups was observed in sex, race, performance status, number of metastatic sites, number of prior therapies, serum albumin and lactate dehydrogenase levels, and Royal Marsden Hospital score. The most common tumor types seen were colorectal, head and neck, and breast cancers, which reflected the referral pattern of patients in the Phase I Clinic. Colorectal cancer was the most common malignancy in both groups (wild-type, n=49 [18%] and mutant, n=52 [12.5%]).

Table 1a: Characteristics of patients with wild-type and mutant p53 tumors

Table 1b: Characteristics of patients with wild-type and mutant p53 tumors

* Tumors can have more than 1 mutation in different exon and codon locations. Abbreviations: GI-gastrointestinal, GYN-gynecological.

Table 3: Number of other aberrations associated with wild-type and mutant p53

Table 4: Distribution of the most common other mutations associated with both wild-type and mutant p53 status

*: PTEN loss by immunohistochemistry or mutation 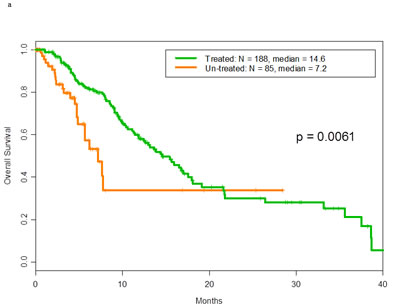 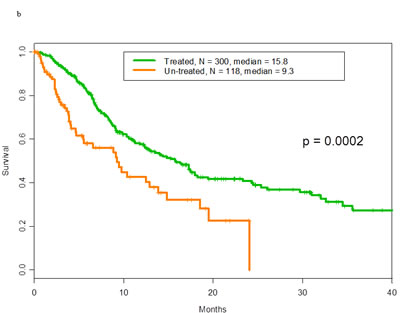