Drug-resistance dramatically limits the effectiveness of most cancer therapies, and especially for ovarian cancer patients [1, 2]. As such, treatment failure remains a significant barrier to successful cancer therapy and precision medicine [3, 4]. As a result, new biomarkers are urgently required for the treatment stratification of ovarian cancer patients, into different risk sub-groups at diagnosis (high-risk versus low-risk) [5].

In this report, we tested the hypothesis that mitochondrial markers might have prognostic value for the identification of high-risk ovarian cancer patients, with increased progression and poor overall survival. For this purpose, we used a data-mining and informatics strategy to determine the potential effectiveness of mitochondrial gene transcripts, in predicting clinical outcome.

Thus, a subset of conventional markers (CA125 and PCNA) can be used to predict overall survival in ovarian cancer patients.

Table 3: Prognostic value of PCNA and markers of inflammation in ovarian cancer 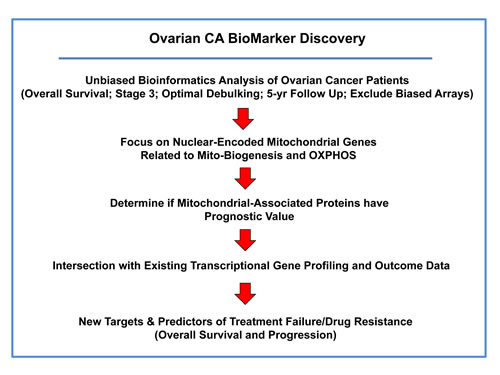 Figure 1: Summary illustrating our systematic approach to ovarian cancer biomarker discovery. For this analysis, we chose to focus on serous ovarian cancer patients, with optimal de-bulking, and 5-years of follow-up data (N = 111). In this context, we evaluated the prognostic value of mitochondrial markers for predicting overall survival (OS), progression-free survival (PFS) and post-progression survival (PPS). 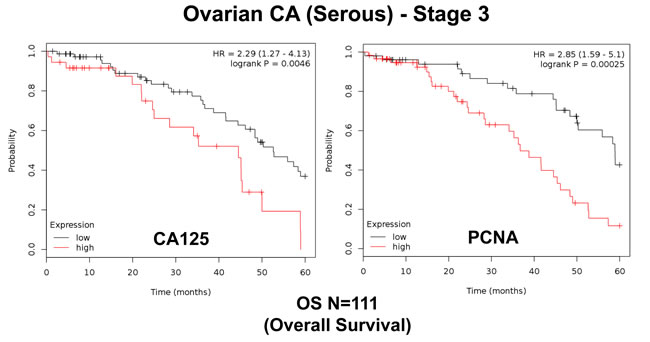 Our hypothesis is that increased mitochondrial biogenesis drives poor overall survival in ovarian cancer patients. To directly test this hypothesis, we next determined the prognostic value of a series of mitochondrial markers. 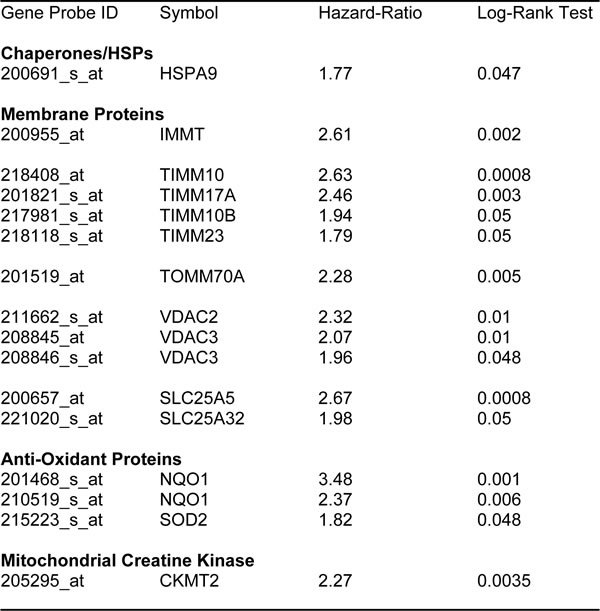 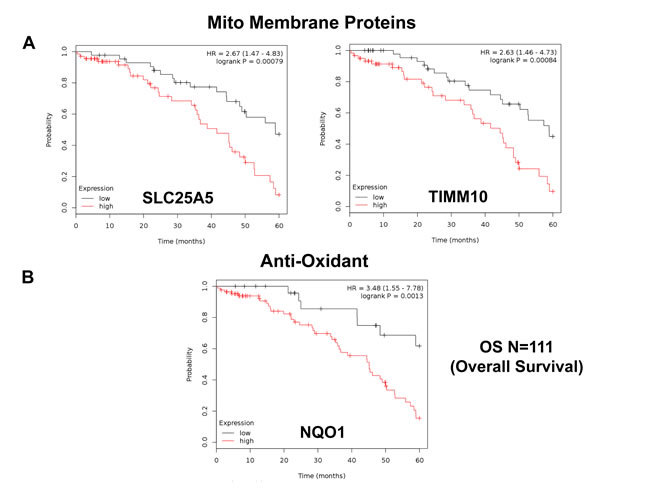 Next, we carefully examined the prognostic value of mitochondrial ribosomal proteins (MRPs). They functionally control the biosynthesis of essential components of the OXPHOS complexes, driving mitochondrial biogenesis (Table 5). Ten members of the large subunit (MRPLs) showed significant prognostic value, with hazard-ratios between 3.56 and 1.90. Interestingly, MRPL49 had the best prognostic value. Eleven different members of the small subunit (MRPSs) showed significant prognostic value, with hazard-ratios between 2.90 and 1.88. In summary, twenty-one different MRPs all predicted poor overall survival. Kaplan-Meier curves for representative examples are shown in Figure 4, panels A & B. 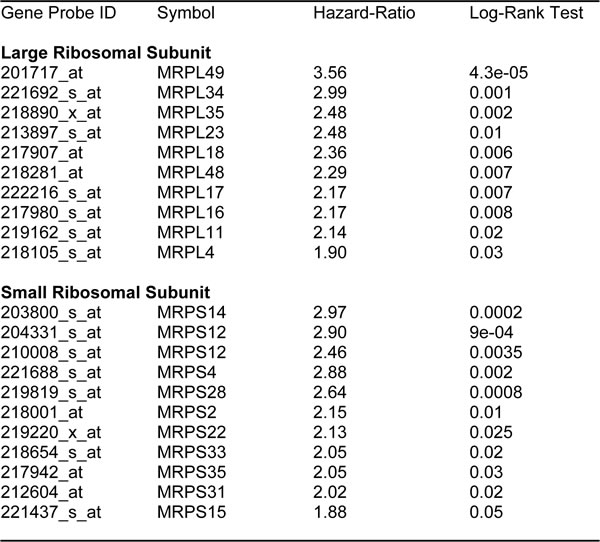 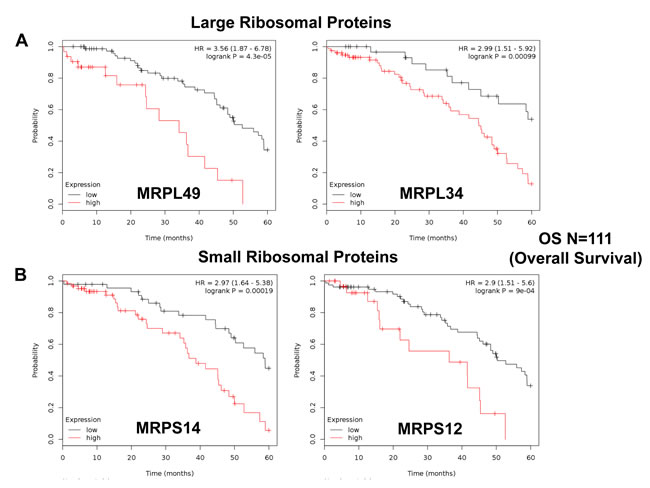 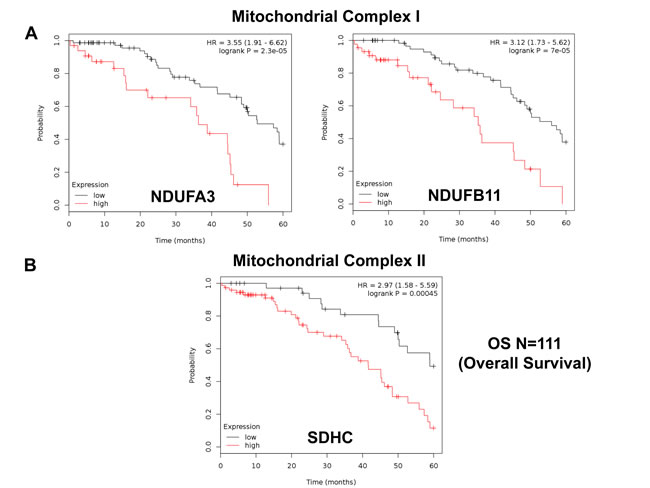 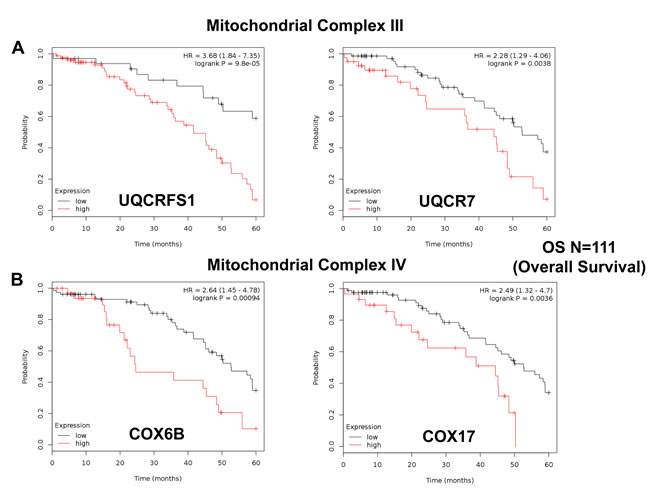 To significantly amplify the prognostic power of these unique mitochondrial markers, we then combined the most promising markers and to derive three new mitochondrial gene signatures.

Ov-Mito-Signature-1 contains 2 genes (MRPL49/UQCRFS1). One component is an MRPL, while the other is part of the OXPHOS machinery (complex III). Ov-Mito-Signature-2 also consists of 2 genes (NDUFA3/UQCRFS1). Both components are part of the OXPHOS machinery (complexes I and III). In addition, Ov-Mito-Signature-3 consists of 3 genes (NDUFA3/UQCRFS1/PCNA), namely 2 mitochondrial genes and a proliferative marker (PCNA) (See Tables 7-9). K-M curves for these three signatures are shown in Figures 8-14.

Importantly, Ov-Mito-Signature-1 yielded a significantly improved hazard-ratio for overall survival of 4.59 (p = 3.1e-05) (Table 7 and Figure 8A, left). It was also highly predictive for progression-free survival (Figure 8A, right) and post-progression survival (Figure 8B), in the same group of patients. In addition, it effectively predicted the response to chemotherapy and treatment failure, in patients that received “Platin-derivatives” or “Taxol” (Figure 9). 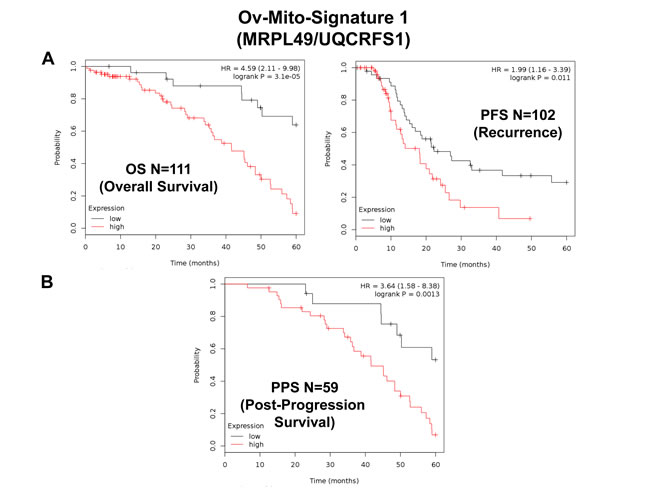 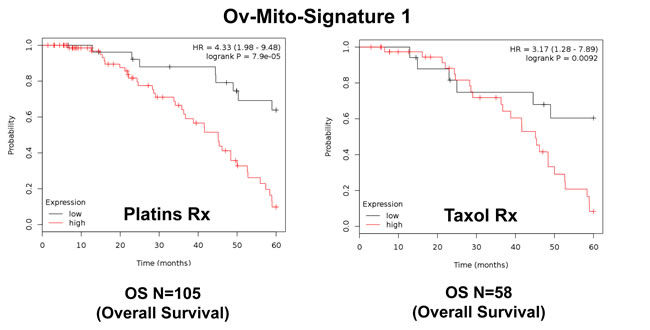 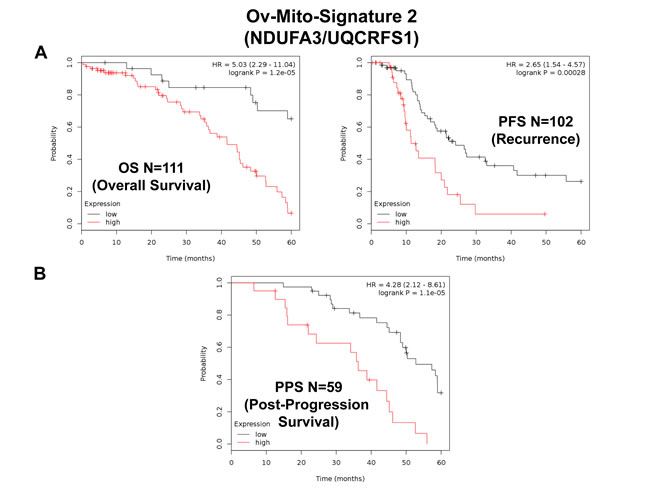 As such, both of these Ov-Mito-Signature(s) were a dramatic improvement over individual mitochondrial biomarkers, as well as CA125 and PCNA (Tables 1 & 3; Figure 2). 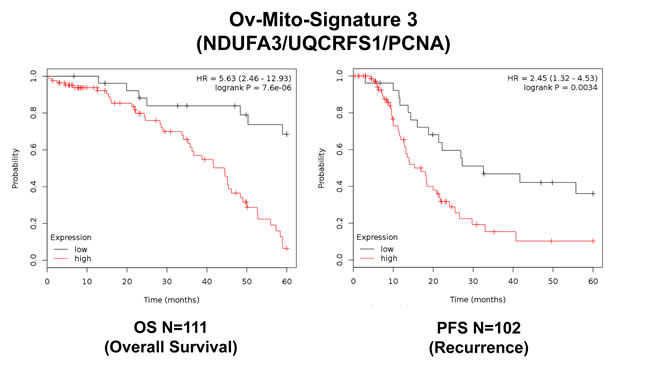 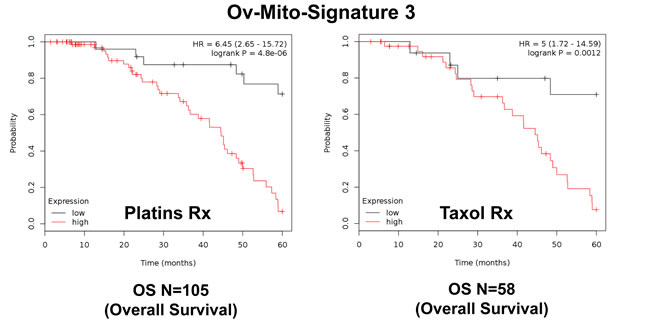 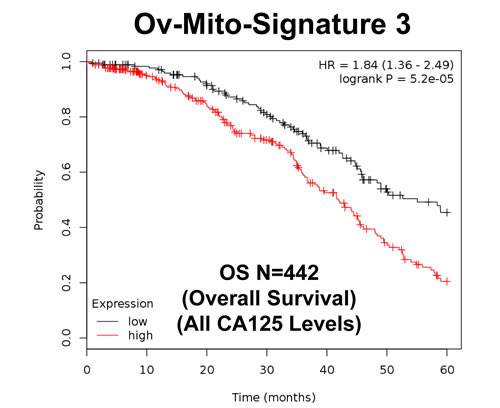 The exact functional role of telomerase activity in ovarian cancer stem cell (CSC) propagation remains largely unknown. Recently, to address this issue, we indirectly monitored telomerase activity, by linking the hTERT-promoter to eGFP [6, 7]. Using SKOV3 ovarian cancer cells, stably-transfected with the hTERT-GFP reporter, we then used GFP-fluorescence to fractionate these cell lines into GFP-high and GFP-low populations. We functionally compared the phenotype of these GFP-high and GFP-low cell sub-populations. Importantly, we showed that ovarian cancer cells with higher telomerase activity (GFP-high) are energetically-activated, with increased mitochondrial OXPHOS and glycolysis [6]. This was confirmed by unbiased label-free proteomics analysis. A sub-population of SKOV3 cells with high telomerase activity showed i) increased “stemness” (3D-spheroid formation) and ii) enhanced cell migration (Boyden-chamber assay). These cellular phenotypes were halted by inhibitors of energy-metabolism, targeting either OXPHOS or glycolysis, or by using doxycycline, a clinically-approved antibiotic, that inhibits mitochondrial biogenesis [6, 7].

Telomerase activity also determined the ability of hTERT-high ovarian CSCs to proliferate, as determined by monitoring DNA-synthesis. Use of Palbociclib, a CDK4/6 inhibitor (an FDA-approved drug) specifically blocked ovarian CSC propagation, with an IC-50 of ~100 nM [6]. Thus, telomerase-high ovarian CSCs are the most energetically-activated, migratory and proliferative cell sub-population [6]. These findings suggest a mechanistic interpretation for why long telomere length (a specific marker of high telomerase activity) is strictly correlated with metastasis disease progression and poor outcome in ovarian tumors and other cancer types [8, 9].

As such, elevated telomerase activity may “fuel” the propagation of ovarian CSCs

by activating mitochondrial biogenesis, ultimately leading to poor clinical outcome. These observations may help explain why combining mitochondrial markers, together with the proliferation marker PCNA, so significantly increased the prognostic value of this Ov-Mito-Signature.

In this new paradigm, high-risk patients would be identified at diagnosis by the over-expression of mitochondrial mRNA transcripts in their ovarian tumors (Figure 15). As a consequence, these patients could then be treated with certain FDA-approved drugs (e.g., Doxycycline or Palbociclib; together with the standard of care), to improve overall survival. These therapeutics have been previously documented to halt the proliferation of the ovarian CSC population [6].

FDA-approved antibiotics can safely prevent mitochondrial biogenesis and/or OXPHOS as a manageable, off-target, “side-effect” [6, 7, 10-16]. These antibiotics include the tetracyclines, the erythromycins, as well as pyrvinium pamoate, atovaquone, and bedaquiline [10, 11, 13, 14]. For example, the new mitochondrial markers and Mito-Signatures we have discovered, could be used as companion diagnostics, for re-purposing these FDA-approved drugs as novel anti-cancer agents. More specifically, this would facilitate the ability of medical oncologists to identify the correct patient sub-population for new phase II clinical trials for drug re-purposing/re-positioning in serous ovarian patients, as an add on to conventional chemo-therapy (e.g., platins and taxol). 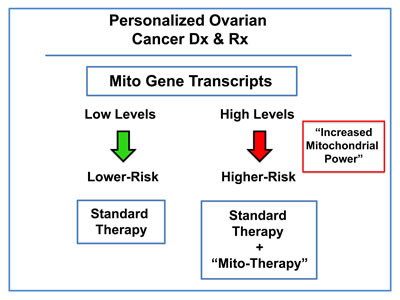 The three new Mito-Signatures that we developed may also be useful for selecting new “druggable” targets for new drug development, to prevent treatment failure and improve overall survival. As a consequence of our K-M analyses, the mitochondrial ribosome would be an attractive new target for developing novel inhibitors of mitochondrial protein translation in cancer cells; similarly, mitochondrial chaperones, the OXPHOS complexes and the mitochondrial ATP-synthase may also be suitable drug targets. Multiple members of these multi-subunit protein complexes show significant prognostic value, suggesting that modulation of their intrinsic activity may provide therapeutic benefits. Targeting of these large complexes would be predicted to suppress tumor recurrence and prevent disease progression in these serous ovarian cancer patients.

In addition, such mitochondrial markers could also be employed as companion diagnostics for novel therapies targeting either mitochondria or telomerase (hTERT) and/or cell proliferation, to select the high-risk sub-population of ovarian cancer patients, resulting in the necessary treatment stratification. In direct support of this assertion, we showed here that three different Mito-Signature(s) could be used to successfully identify the sub-population of high-risk ovarian cancer patients that failed “platin” or “taxol” based therapies. These results indicate that mitochondrial markers could be used to monitor and/or predict the response to therapy, specifically identifying patients at high-risk for treatment failure at diagnosis, up to 5 years in advance, even before therapy is initiated.

This allowed us to directly perform in silico validation of these mitochondrial biomarker candidates. The 2012 version of the database was originally utilized for all these analyses; however, virtually identical results were also obtained with the 2015 and 2017 versions.

It should be noted that this bioinformatics analysis, focused on nuclear-encoded mitochondrial gene transcripts, was not funded by a specific grant and did not require any research expenditures, since no “wet” laboratory experiments were performed.