Here, we employed a bioinformatics approach to identify novel molecular determinants to predict tumor progression and overall survival in gastric cancer patients. In particular, we directly assessed whether nuclear-derived mRNA species encoding proteins involved in mitochondrial protein translation and OXPHOS are able to successfully predict clinical outcome in gastric cancer. As such, using in silico validation, we have now established the prognostic value of these mitochondrial biomarkers, in a defined population of gastric cancer patients. In this context, we interrogated 5 year follow-up data collected from a group of N = 359 gastric cancer patients. Importantly, in this group of cancer patients, Ki67 and PCNA (conventional markers of cell proliferation) were associated with tumor progression, as might be expected. Using this simplified informatics approach, we identified ~75 new individual mitochondrial gene probes that effectively predicted tumor progression, with hazard-ratios (HR) of up to 2.22 (p < 2.1e-10). These mitochondrial mRNA transcripts included heat shock proteins/chaperones, membrane proteins, anti-oxidants, enzymes involved in genome maintenance, as well as mitochondrial ribosomal proteins (MRPs) and numerous members of the OXPHOS complexes. In addition, we combined 8 mitochondrial protein transcripts (NDUFS5, VDAC3, ATP5O, IMMT, MRPL28, COX5B, MRPL52, PRKDC), to generate a compact gastric mitochondrial gene signature, associated with a HR of 2.77 (p = 1.4e-14). As a result of this analysis and validation, we strongly suggest that proteins involved in mitochondrial protein translation and OXPHOS should be considered as targets for new drug discovery, for the treatment of gastric cancers. The mitochondrial markers we identified here could also be used as companion diagnostics, to predict clinical outcomes, as well as the patient response to therapy. This should allow a more successful and personalized approach to gastric cancer diagnosis and therapy.

Gastric cancer, also known as stomach cancer, starts as an infectious disease that drives the development of chronic inflammation and ulcerated lesions, located within the stomach wall lining. In most cases of gastric cancer, these lesions are morphologically defined as epithelial carcinomas [1-3]. During tumor progression, the gastric cancer cells migrate and metastasize to the lymph nodes, the abdomen, bones, lungs and the liver. The most common etiology of gastric cancer is chronic infection with Helicobacter pylori, a bacterium, which represents ~50-70% of the cases [4-6]. Classic symptoms consist of “heartburn”, abdominal pain, nausea and vomiting, as well as anemia and occult blood in the feces. The diagnosis of gastric cancer is confirmed by an endoscopic biopsy, revealing an invasive carcinoma. The disease is most common in Asian countries, especially in South Korea and Japan, among others [1-6].

More specifically, we employed a bioinformatics approach to determine the prognostic utility of nuclear-encoded mitochondrial mRNA species in predicting clinical outcome. Our results indicate that ~75 individual mitochondrial gene probes can be effectively used, to predict progression and survival in gastric cancer patients. As a result, we propose the idea that mitochondria are novel therapeutic targets for drug discovery, aimed at optimizing the effectiveness of gastric cancer therapy [7-9].

Here, we used publically available transcriptional profiling data from the tumors of gastric cancer patients, with 5 years of follow-up data, to identify new potential biomarkers (Figure 1). As proliferative biomarkers are often used as clinical endpoints in patient trials, we first assessed the prognostic value of Ki67 and PCNA, in this patient population. Tables 1, 2 and Figure 2 both show the prognostic value of these markers. The hazard-ratios for Ki67 and PCNA were 1.79 and 1.86, respectively, for time to first progression (FP).

We also assessed the prognostic value of a macrophage-specific marker of inflammation, namely CD163. Table 2 and Figure 2 show that CD163 effectively predicted time to first progression, with a hazard-ratio of 1.46. Thus, conventional markers of proliferation and inflammation predict overall survival in gastric cancer patients.

Table 2: Prognostic value of PCNA and CD163 in gastric cancer 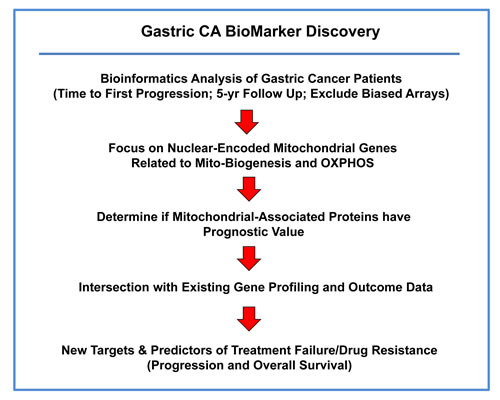 Figure 1: A bio-informatics approach to gastric cancer marker discovery. We chose to focus on gastric cancer patients, with 5-years of follow-up data (N = 359). In this context, we evaluated the prognostic value of mitochondrial markers for predicting time to first progression and overall survival. 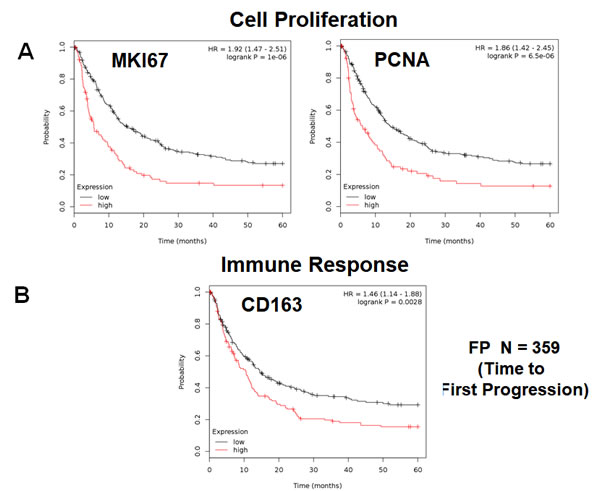 First, we examined the behavior of mitochondrial membrane proteins and HSPs/chaperones. Table 3 and Figure 3 both show that VDAC3 and IMMT had the best prognostic value, with a hazard-ratio of up to 2.22 (p<1.4e-09). HSPD1 and members of the TIMM and TOMM gene families also had prognostic value; SOD2 also had significant value. Positive results were also obtained with DNA-PK (PRKDC), a kinase that maintains the integrity and copy number of the mitochondrial genome (mt-DNA). 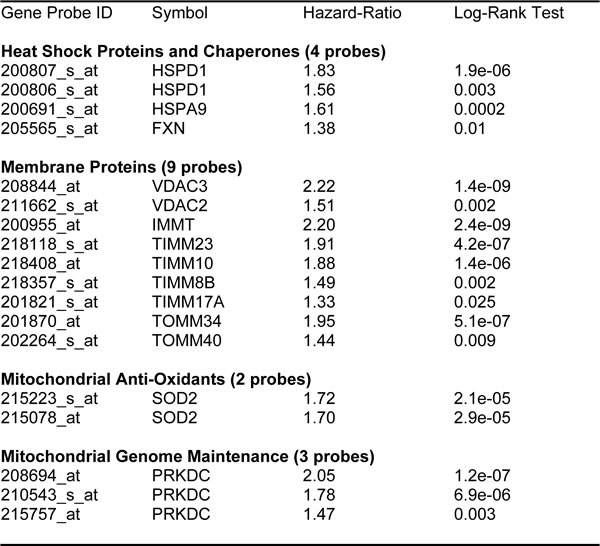 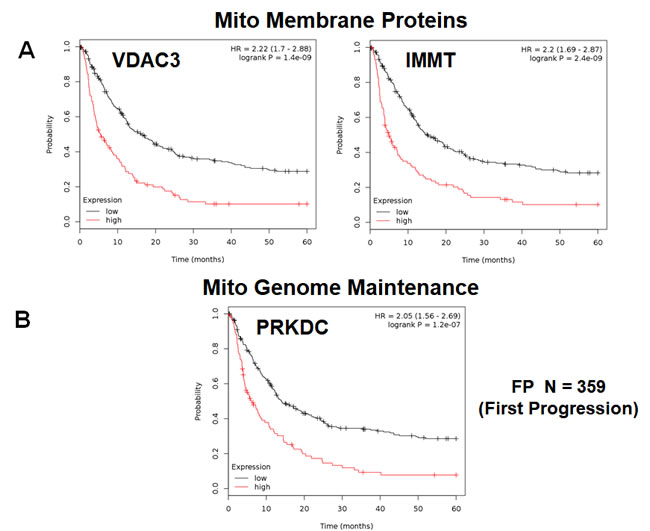 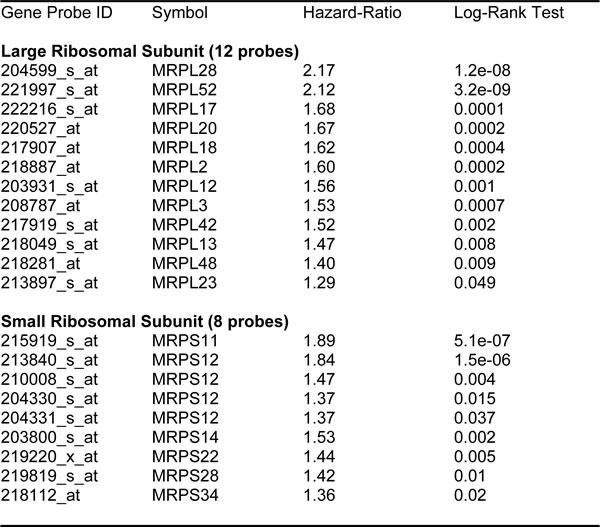 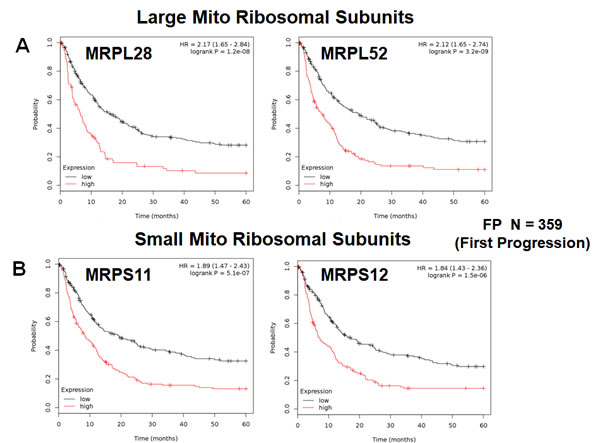 In addition, we evaluated the prognostic value of members of the OXPHOS complexes I-V. These results are summarized in Table 5. Interestingly, 37 different gene probes for the OXPHOS complexes showed hazard-ratios between 2.27 and 1.30. NDUFS5 (complex I) had the best prognostic value (HR=2.27; p=6e-10). COX5B (complex IV) and ATP5O (complex V) also showed significant prognostic value (HR=2.14; p=1.4e-08 versus HR=2.22; p=2.1e-10). Kaplan-Meier analysis for components of complex I and II are shown in Figure 5A, 5B, while results with complex III and IV are shown in Figure 6A, 6B. Results with complex V are highlighted in Figure 7. 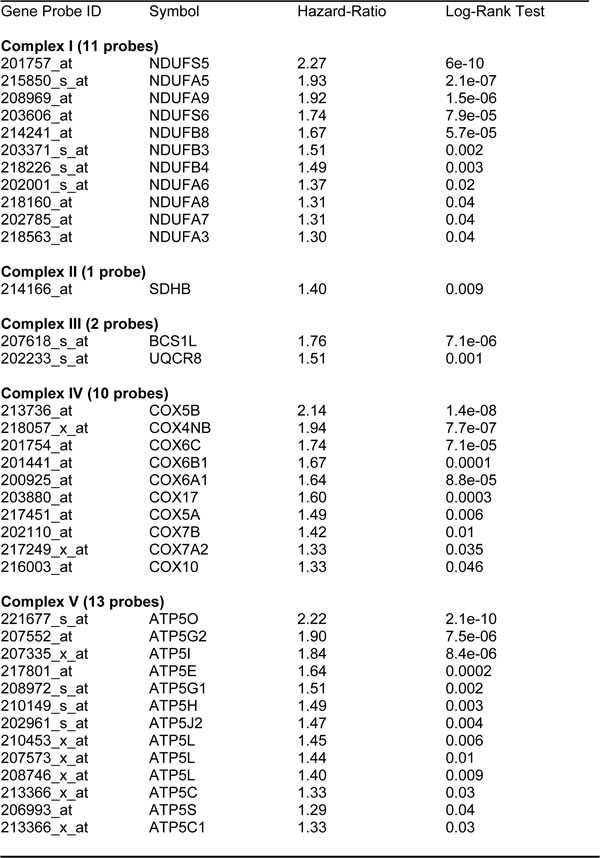 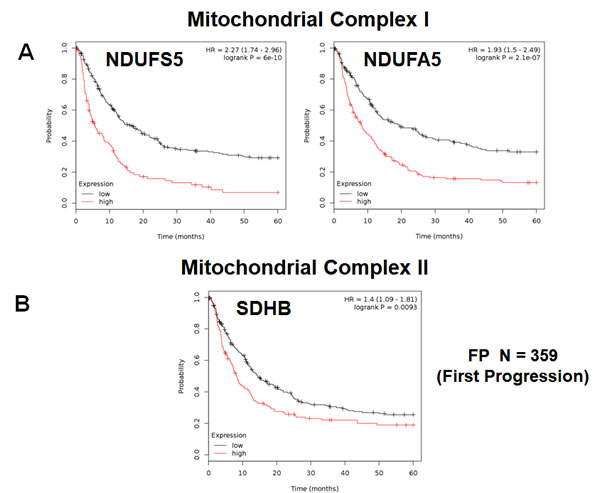 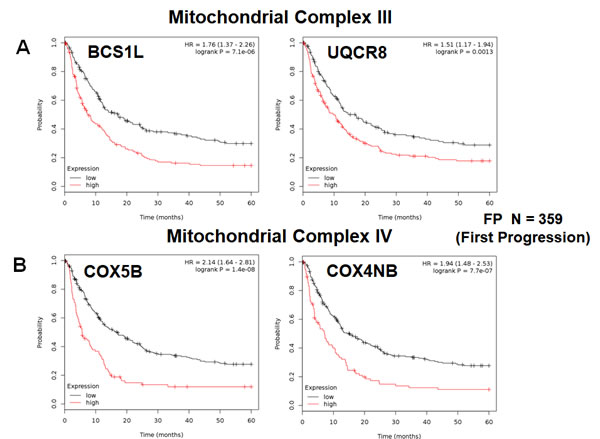 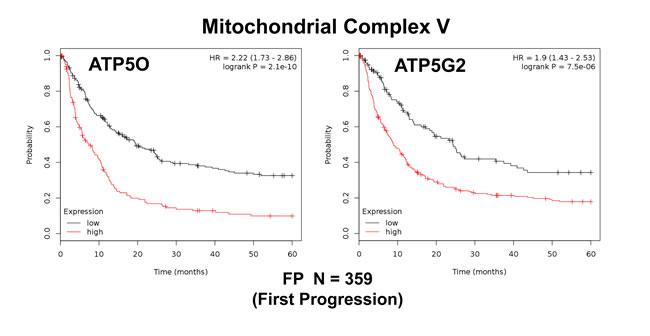 To increase the prognostic significance of these unique mitochondrial markers, we then combined the most promising markers to create a new gastric mitochondrial gene signature.

As such, the Ga-Mito-Signature-1 represents a significant improvement over individual mitochondrial biomarkers, as well as Ki67 and PCNA. 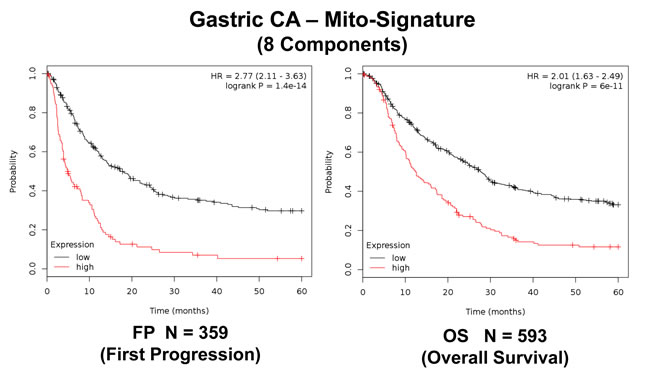 Here, we suggest that the new mitochondrial markers that we developed here may also be useful for selecting new “druggable” targets for innovative drug development, to prevent treatment failure and improve overall survival. As a consequence of our K-M analyses, we believe that the mitochondrial ribosome would be an attractive new target for developing novel inhibitors of mitochondrial protein translation in cancer cells; similarly, mitochondrial chaperones, the OXPHOS complexes and the mitochondrial ATP-synthase may also be suitable drug targets. Particular components of these multi-subunit protein complexes show significant prognostic value, suggesting that modulation of their intrinsic activity may provide therapeutic benefits. Targeting of these large protein complexes would be predicted to suppress tumor recurrence and prevent disease progression in these gastric cancer patients.

Similarly, these mitochondrial markers could also be employed as companion diagnostics for novel therapies targeting either mitochondrial protein translation or cellular respiration, to select the high-risk sub-population of gastric cancer patients, resulting in the proper treatment stratification (Figure 9). In direct support of this assertion, we showed here that ~75 different mitochondrial probes could be used to successfully identify the sub-population of high-risk gastric cancer patients. As such, these results indicate that mitochondrial markers could be used to monitor and/or predict the response to therapy, identifying patients at high-risk for treatment failure at diagnosis, several years in advance, even prior to the initiation of therapy. 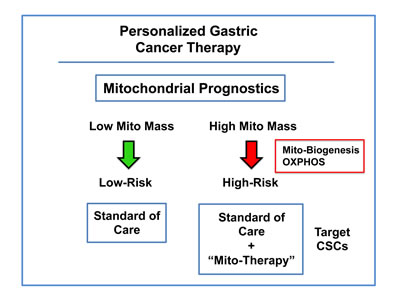 Importantly, our previous studies directly show that MitoTracker (a fluorescent mitochondrial vital dye) can be used, together with flow cytometry, to purify CSCs from heterogeneous populations of cancer cells [12,13]. Importantly, the “Mito-high” cells showed the greatest functional capacity for i) anchorage-independent growth and ii) tumor-initiating activity in vivo [12-14]. Quantitatively similar results were also obtained with other mitochondrial probes (for detecting ROS and H2O2) and/or NAD(P)H auto-fluorescence, all surrogate markers of increased mitochondrial respiratory activity [14].

In support of these functional studies, we have also shown that FDA-approved antibiotics can be used to effectively target mitochondria in CSCs [15-21]. Because mitochondria evolved from aerobic bacteria, over a period >1.5 billion years, certain types of antibiotics functionally inhibit mitochondrial biogenesis, as a manageable side-effect. In this context, tetracycline antibiotics, such as Doxycycline, appeared to be the most promising. For example, Doxcycline effectively eradicates CSCs in 12 different cell lines, representing 8 different cancer types, as well as in primary tissue samples derived from patients with advanced metastatic disease (collected from pleural effusions or ascites fluid) [15,16].

Interestingly, these functional observations could mechanistically explain the high prognostic value of mitochondrial markers in predicting progression and survival in gastric cancer patients. Patients with high levels of mitochondrial markers may have increased levels of CSCs (Figure 9). As a result, these mitochondrial biomarkers could also be used as companion diagnostics, to identify which gastric cancer patients would benefit most from anti-cancer therapy with Doxycycline (or perhaps with other inhibitors of mitochondrial biogenesis and/or drugs metabolically targeting respiratory function, such as Metformin).

Kaplan-Meier (K-M) Analyses. To perform K-M analysis on nuclear mitochondrial gene transcripts, we used an open-access, online survival, data analysis tool to interrogate publically available microarray data from up to 1,065 gastric cancer patients [10]. This allowed us to determine their overall prognostic value. For this purpose, we primarily analyzed 5-year follow-up data from gastric cancer patients (N = 359). Biased array data were excluded from the analysis. This allowed us to identify ~75 nuclear mitochondrial gene probes, with significant prognostic value. Hazard-ratios for time to first progression (FP) and overall survival (OS) were calculated, at the best auto-selected cut-off, and p-values were calculated using the logrank test and plotted in R. K-M curves were also generated online using the K-M-plotter (as high-resolution TIFF files) [10], using univariate analysis:

This allowed us to directly perform in silico validation of these mitochondrial biomarker candidates.