Reduced E-cadherin expression is correlated with poor prognosis in patients with bladder cancer: a systematic review and meta-analysis

*Authors contributed equally to this work

Bladder cancer (BC) is the most common malignancy of the urinary tract, with an estimated 76,960 new cases and 16,390 deaths in the United States of America in 2016 alone [1]. Clinically, BC is classified as non-muscle-invasive BC (NMIBC) and muscle-invasive BC (MIBC). At present, approximately 75% of BC cases are limited to the mucosa or submucosa at first diagnosis; however, about 50%–70% of NMIBC patients have tumor recurrence, and approximately 10%–30% cases progress to MIBC [2]. MIBC is highly aggressive and can rapidly progress and metastasize. Despite the improved therapeutic strategies available nowadays, most MIBC patients still eventually face death [3]. Hence, prediction models that can stratify patients who have an unfavorable prognosis and those who may benefit from early systematic therapy are greatly needed. Until date, tumor stage, grade, and metastasis are regarded as the major prognostic factors for BC. However, the currently used system seems unable to accurately predict the prognosis of BC patients with diverse and complicated tumor backgrounds [4]. Therefore, novel biomarkers that can identify patients at relatively greater risk when used alone, or in combination with other clinicopathological parameters, are required to precisely guide clinical decisions.

A total of 851 studies were potentially identified from the initial literature search of the databases [PubMed (n = 144), Embase (n = 255), Cochrane Library (n = 3), and Web of Science (n = 449)], and 528 of these studies were retained after duplicated studies were removed. By reviewing titles and abstracts, 479 studies were excluded because they were non-human studies, letters, case reports, meeting records, reviews, commentaries, and other obvious irrelevant studies. Additionally, to avoid heterogeneity caused by the method used to evaluate E-cadherin expression, studies without immunohistochemistry (IHC)-based evaluation were excluded. The remaining 49 studies were assessed in full text. Subsequently, 30 studies were excluded for various reasons such as without survival data, no data available, without IHC-based evaluation, HR based on multiple proteins, HR based on other proteins, and duplicated publication. Ultimately, a total of 19 studies with 2,089 patients were included in our meta-analysis [12–30]. A flowchart of the literature selection process is shown in Figure 1. 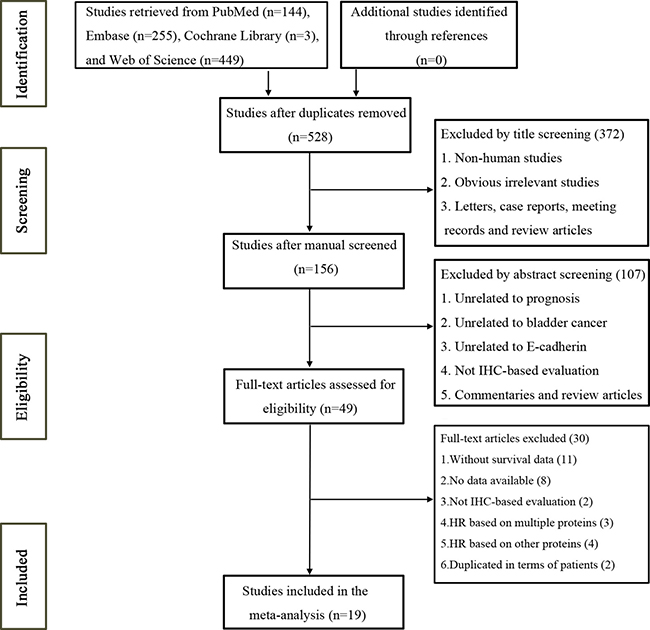 The fundamental features of the 19 studies are summarized in Table 1. All of these studies were retrospective observational cohort studies and were published between 1995 and 2017. Five studies evaluated patients from the United States, three from China, two from Germany, two from Japan, two from France, one from Italy, one from Sweden, one from Turkey, one from Spain, and one from the United Kingdom. For the prognostic value of reduced E-cadherin expression in BC, 12 studies investigated overall survival (OS), 9 studies investigated progression-free survival (PFS), and 6 studies investigated recurrence-free survival (RFS). Several clinicopathological data were reported in 12 studies (onset age in 4 studies, pathological T stage in 11 studies, metastasis in 4 studies, grade in 12 studies, and carcinoma in situ in 3 studies). All studies applied IHC staining to evaluate E-cadherin expression. Reduced E-cadherin expression was defined using different cut-off values among different studies; thus, we classified all the patients on the basis of their original studies (normal or reduced staining).

Table 1: Characteristics of eligible studies in the meta-analysis 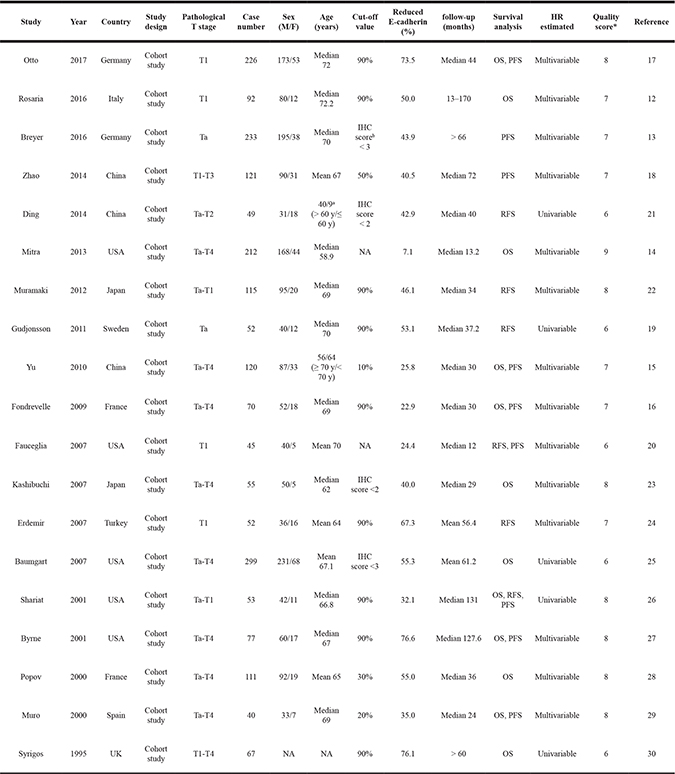 *The quality of the included studies was evaluated using the Newcastle–Ottawa scale. 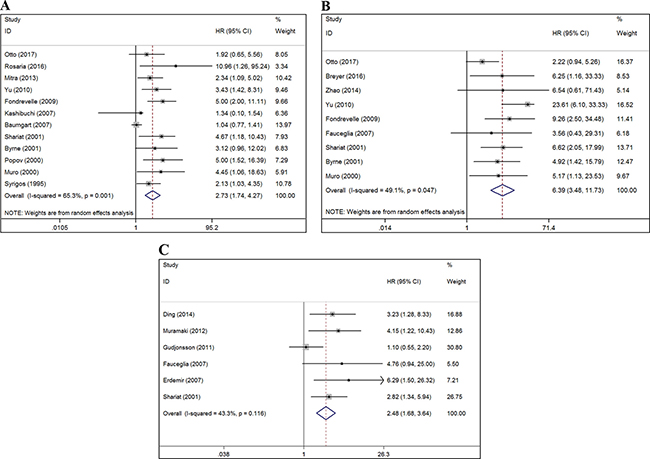 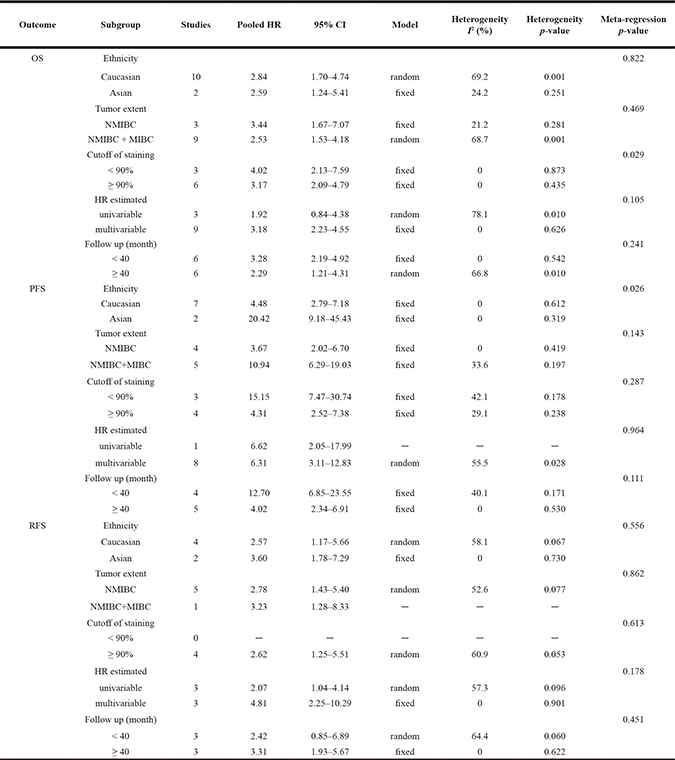 Table 3: Meta-analysis of the association between reduced E-cadherin expression and clinicopathological features of bladder cancer 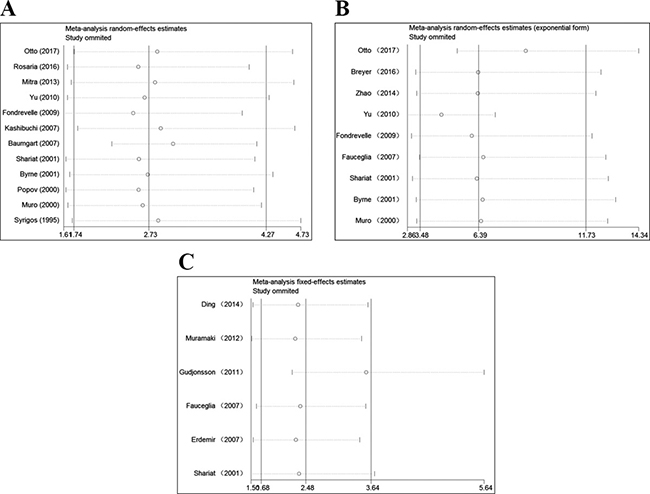 Begg’s test (P value) and Egger’s tests (P value, intercept with corresponding 95% CI), as well as funnel plots, were used to assess publication bias in this meta-analysis. As there were limited number of studies (n < 10) for PFS and RFS, publication bias evaluated by Begg’s and Egger’s test was not necessary. As illustrated in Figure 4, the funnel plots for PFS and RFS were symmetrical. However, both of these tests suggested that significant publication bias existed for OS (PBegg’s = 0.451 and PEgger’s = 0.001, intercept 2.63 with 95% CI: 1.48 to 3.79). Trim-and-fill analysis was performed and the results showed that after incorporating two additional studies, the funnel plots were symmetrical and that reduced E-cadherin expression was significantly associated with poor OS (corrected HR = 2.45; 95% CI: 1.62–3.71) (Figure 4). 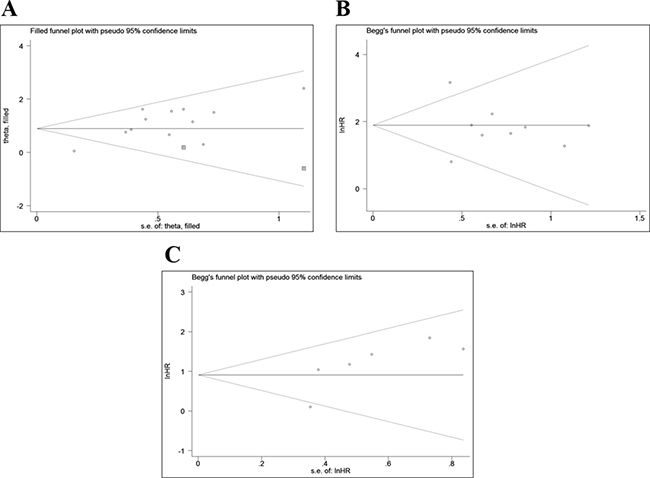 E-cadherin is an essential intercellular adhesion molecule that correlates with histogenesis and the stabilization and differentiation of epithelial cells [31]. It is generally known that down-regulation of E-cadherin expression is regarded as the most important hallmark of epithelial-to-mesenchymal transformation (EMT), which promotes the progression and metastases of many epithelium-derived carcinomas, including BC [32]. Over recent years, E-cadherin has been attracting increasing attention as a valuable prognostic predictor and potential therapeutic target for carcinomas. Several studies have confirmed that reduced E-cadherin expression is significantly correlated with the poor prognosis of gastric cancer, hepatocellular cancer, lung cancer, head and neck squamous cell carcinoma, and breast cancer [5, 7, 9, 10, 33]. However, the prognostic and clinicopathological roles of reduced E-cadherin expression remain inconsistent for BC. Thus, we performed this meta-analysis to resolve the remaining disagreement and provide valuable evidence on the association between reduced E-cadherin expression and BC prognosis. Additionally, to avoid the heterogeneity caused by the different methods used to evaluate E-cadherin expression, studies without IHC-based evaluation were excluded.

Our results also suggested that the down-regulation of E-cadherin expression was associated with a higher pathological T stage, positive metastasis, grade, and carcinoma in situ. The biological mechanism of E-cadherin can partially explain its prognostic and clinicopathological value for BC patients. E-cadherin routinely plays an inhibitory effect on EMT. Reduced E-cadherin expression may therefore induce EMT, which increases tumor cell mesenchymal characteristics and subsequently promotes cell motility and invasive properties [34, 35]. This process accelerates the development and progression of malignant tumors. Furthermore, the low-expression of E-cadherin is very closed associated with the chemoresistance and radioresistance of tumor cells and induces tumor cells to exhibit obvious properties of cancer stem cells [36, 37].

To the best of our knowledge, this study is the first systematic and comprehensive analysis to investigate the associations between E-cadherin expression and prognostic and clinicopathological value in BC patients, although some limitations should be pointed out. First, most of the included studies were retrospective studies that might render our conclusions less reliable. Second, all of the included studies evaluated E-cadherin expression via IHC, although different primary antibody sources and antibody dilution ratios could have resulted in differences in terms of IHC sensitivity. Third, the criteria to define normal or reduced expression of E-cadherin were not uniform across different studies, which may potentially lead to heterogeneity. Thus, a more uniform scoring criteria should be defined in the future. Fourth, relatively limited studies were extracted for some subgroup analyses, which might inevitably increase the risk of random error and contribute to premature results. With more large-scale prospective studies published in the future, an update is necessary to render a more convincing result. Finally, studies with statistically significant results are potentially more likely to be submitted and published, than those with non-significant results, which could generate publication bias [38].

This meta-analysis was performed in accordance with the guidelines of the Preferred Reporting Items for Systematic Reviews and Meta-Analyses (PRISMA) [39].

A systematic literature search was performed in the electronic databases PubMed, Embase, Cochrane Library, and Web of Science on March 1, 2017, using the following search strategy: (“E-cadherin” or “E-CAD” or “cadherin-1” or “CDH1”) and (“bladder cancer” or “bladder tumor” or “bladder carcinoma” or “bladder neoplasm” or “urothelial cancer” or “urinary tract cancer”) and (“prognosis” or “prognostic” or “survival” or “outcome” or “mortality”). Additionally, we manually searched the references section of all eligible literature.

Studies were included on the basis of the following criteria: (1) studies that reported the association between E-cadherin expression and its prognostic significance in BC; (2) studies that assessed E-cadherin protein expression using IHC; and (3) studies that described survival outcomes (OS, PFS, or RFS) with HR and 95% CI. Exclusion criteria were as follows: (1) non-English papers; (2) non-human studies; (3) letters, case reports, meeting records, commentaries, or review articles; (4) studies that investigated the survival outcomes of BC based on multiple proteins; (5) studies that did not evaluate E-cadherin protein expression, clinical parameters, and survival outcome; and (6) studies that were unable to provide sufficient data for obtaining HR and 95% CI values. All evaluations were independently conducted by three investigators to ensure the accurate inclusion of studies. For duplicate data, only studies with relatively more details and larger sample sizes were retrieved.

Three individual researchers independently extracted data from the included studies using a predefined form. Discrepancies in data extraction were resolved through negotiation and consultation. The following relevant data were extracted: publication data including author names and the year in which the study was conducted; origin of the studied population; study design; pathological T stage; sample size; sex; patient’s age; cut-off value; follow-up time; and effect estimates, namely, HR of E-cadherin expression for OS, PFS, or RFS, as well as their 95% CI (Table 1).

The Newcastle–Ottawa scale, which was recommended by the Cochrane Non-Randomized Studies Methods Working Group [40], was used to assess the quality of the included studies. The assessment, with a score ranging from 0 to 9, included three perspectives: selection, comparability, and outcomes. Studies with scores higher than 6 were considered to be of high quality. To assure the quality of this meta-analysis, only high-quality studies included.

Pooled HR and RR with 95% CI were used to evaluate the effect of reduced E-cadherin expression on the prognosis and clinicopathological features of BC, respectively. An observed HR > 1 implied a relatively worse prognosis for the group with reduced E-cadherin expression. An observed RR > 1 indicated relatively more advanced clinicopathological features for patients with reduced E-cadherin expression. The heterogeneity of the studies was assessed using Cochran’s Q test and Higgins I-squared statistic. When significant heterogeneity was observed (I2 > 50% or p < 0.05), a random-effect model was used; otherwise, a fixed-effect model was chosen (I2 < 50% and p > 0.05). For additional analysis, subgroup analyses were performed to investigate the association between reduced E-cadherin expression and BC prognosis on the basis of ethnicity, tumor extent, cut-off of staining, HR estimated, and follow-up time. Meta-regression analysis was used to explore the source of inter-study heterogeneity. Potential publication bias was assessed using Begg’s and Egger’s tests. We also performed a sensitivity analysis by sequential omitting individual studies to evaluate the robustness of pooled results. All statistical analyses were performed using Stata 12.0 software (Stata Corporation, College Station, TX, USA), and a two-sided p < 0.05 was considered statistically significant.

In conclusion, despite these limitations, our meta-analysis suggested the prognostic and clinicopathological significance of E-cadherin expression in patients with BC. Our results revealed that reduced E-cadherin expression predicted poor prognosis and advanced clinicopathological characteristics, which could potentially serve as a risk stratification biomarker, and even a valuable therapeutic target, for BC patients. However, more large-scale prospective studies using uniform criteria and long-term follow-up are required to confirm our findings in the future.

16. Fondrevelle ME, Kantelip B, Reiter RE, Chopin DK, Thiery JP, Monnien F, Bittard H, Wallerand H. The expression of Twist has an impact on survival in human bladder cancer and is influenced by the smoking status. Urol Oncol. 2009; 27:268–276.

40. Stang A. Critical evaluation of the Newcastle-Ottawa scale for the assessment of the quality of nonrandomized studies in meta-analyses. Eur J Epidemiol. 2010; 25:603–605.