The aberrant expression of long noncoding RNAs (lncRNAs) is implicated in cancer development and progression. However, the clinical significance and mechanism by which NONHSAT062994 regulates colorectal cancer (CRC) is unknown. We here reported that NONHSAT062994 was significantly downregulated in human CRC tissues and cell lines. Moreover, its expression was inversely correlated with tumor size and overall survival (OS) time in CRC patients. In CRC cells, the overexpression and knockdown of NONHSAT062994 inhibited and enhanced CRC cell growth, respectively, in vitro and in vivo. Mechanistically, NONHSAT062994 functioned as a tumor suppressor to inhibit CRC cell growth by inactivating Akt signaling. Notably, the NONHSAT062994 expression status was negatively correlated with the Akt downstream targets c-Myc and Cyclin D1 in clinical CRC samples. The current findings suggest that NONHSAT062994 plays a critical role in the development of CRC by regulating Akt signaling, and identified a candidate prognostic biomarker or potential therapeutic target for CRC patients.

Colorectal cancer (CRC), 1 of the most common types of cancer, is associated with a high mortality rate worldwide [1]. Although great developments have been made in diagnostic and therapeutic modalities, the overall survival (OS) time of CRC patients is still unsatisfactory [2]. In most cases, CRC is diagnosed at an advanced pathological stage before symptoms appear, which may be a major cause of the poor survival. Therefore, identifying new molecular markers or factors that can be used in the clinical diagnosis of CRC patients at an early stage is critical.

Accumulating studies have implicated many molecules and signaling pathways in CRC development and progression. For example, Nur77, RARγ, and OVOL2 are abnormally expressed in CRC tissues and regulate colorectal tumorigenesis and metastasis [3–5]. Dysregulation of signaling pathways such as the Wnt/β-catenin and PI3K/Akt pathways contributes to the malignant proliferation, extensive invasion, and distant metastasis of CRC [6, 7]. Interestingly, recent studies indicated that non-coding RNAs (lncRNAs) have extensive biological roles in cellular development, differentiation, and apoptosis [8–10]. However, aberrant lncRNA expression has frequently been reported in several cancer types, including CRC [11]. For example, upregulation of the lncRNA HOTAIR in CRC enhances the invasive ability of CRC cells and contributes to poor prognosis in CRC patients [12]. In contrast, the lncRNA Loc554202 is downregulated in CRC tissues and cell lines, and functions as a tumor suppressor to regulate cell apoptosis, in part by activating caspase cleavage cascades [13].

lncRNAs exert their functions via complex and diverse molecular mechanisms including epigenetic, transcriptional, and post-transcriptional alterations. For example, the lncRNA HOTAIR regulates polycomb-dependent chromatin modification in CRC [12]. lncRNA-LALR1 inhibits Axin1 expression by recruiting CTGF to the Axin1 promoter region in liver cells [14]. In addition, lncRNA-ATB competitively binds to members of the miR-200 family to upregulate the expression of ZEB1 and ZEB2, which are critical regulators of the epithelial-mesenchymal transition that contributes to cancer cell invasion and metastasis [15]. Furthermore, lncRNAs can serve as signaling molecules to regulate signal transduction by directly interacting with functional domains in signaling proteins. For example, lnc-DC regulates STAT3 signaling by binding directly to STAT3 in the cytoplasm, which promotes human dendritic cell differentiation [16]. Cytoplasmic lncRNA NKILA suppresses breast cancer metastasis via the mechanism where NKILA directly interacts with NF-κB/IκB and inactivates NF-κB inflammatory signaling [17].

lncRNA NONHSAT062994 is a 585-bp transcript located on human chromosome 19. However, no studies have yet focused on its biological role and regulatory mechanism in human diseases including cancer. The aim of the current study was to investigate the role and clinical significance of NONHSAT062994 in CRC. The results demonstrated that NONHSAT062994 was significantly downregulated in both CRC tissues and cell lines. This downregulation was closely associated with a large tumor size and poor survival of CRC patients. Furthermore, in vitro and in vivo studies revealed that NONHSAT062994 inhibits CRC cell growth by inactivating Akt signaling. These findings suggest that NONHSAT062994 could be used as a new biomarker for CRC prognosis and may serve as a potential therapeutic target for CRC. 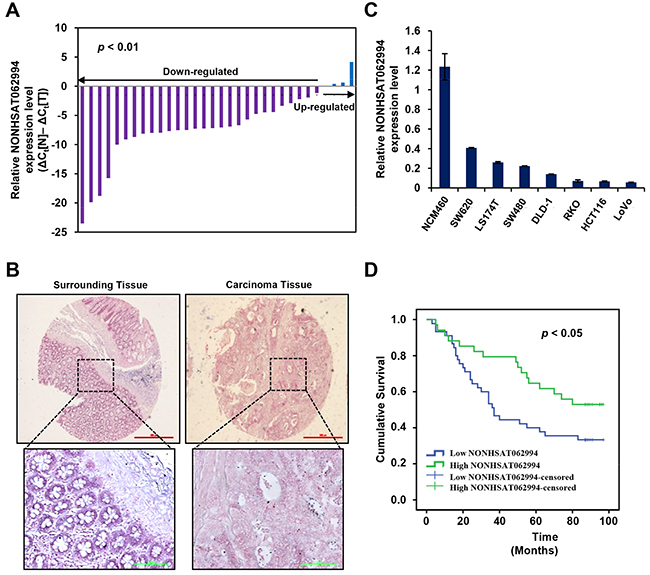 Table 1: Correlation of NONHSAT062994 expression with patients’ clinicopathological variables in 86 cases of CRC 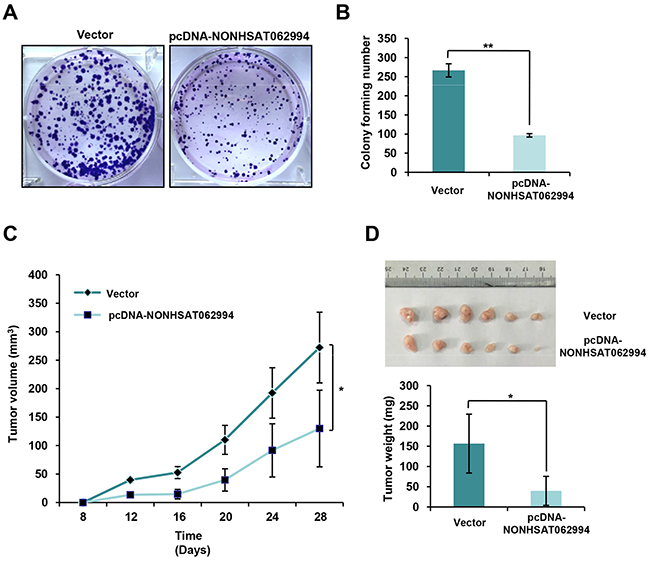 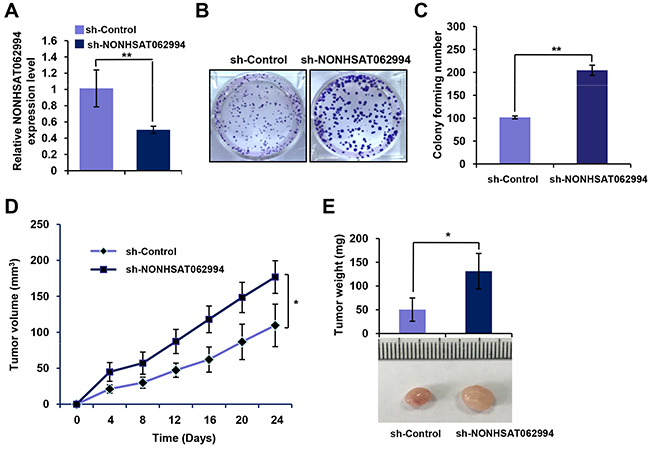 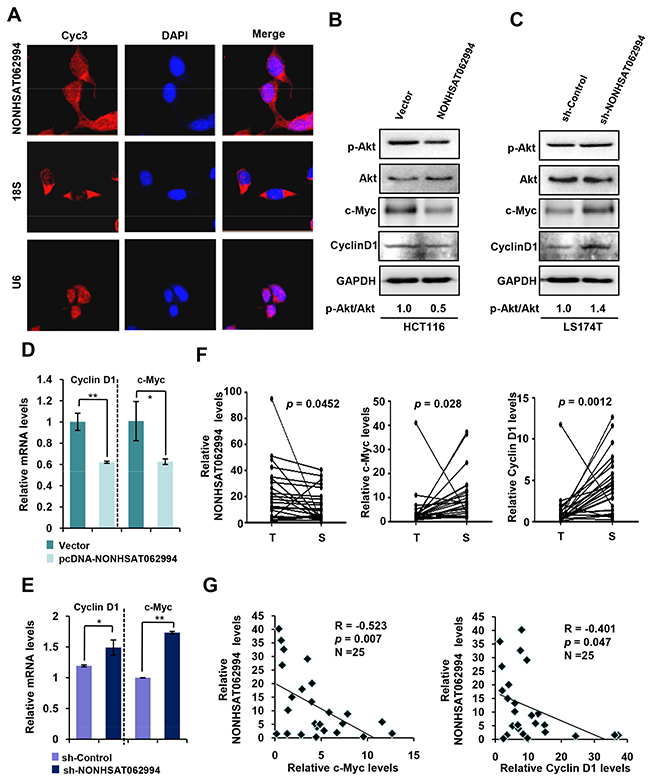 Given the evidence linking aberrant Akt activation to tumorigenesis [7], we next investigated whether Akt signaling is required for the inhibitory effects of NONHSAT062994 on CRC cell proliferation and growth. Colony formation assays revealed that LY294002, an inhibitor of Akt signaling, significantly inhibited NONHSAT062994 silencing-induced CRC cell proliferation (Figure 5A, 5B). The in vitro data were then confirmed in vivo. Treatment with LY294002 greatly reduced the size (Figure 5C) and weight (Figure 5D) of NONHSAT062994-silenced tumors to a level comparable with the control group. Taken together, these results suggest that the inhibitory effects of NONHSAT062994 on colorectal tumorigenesis are dependent on Akt signaling. 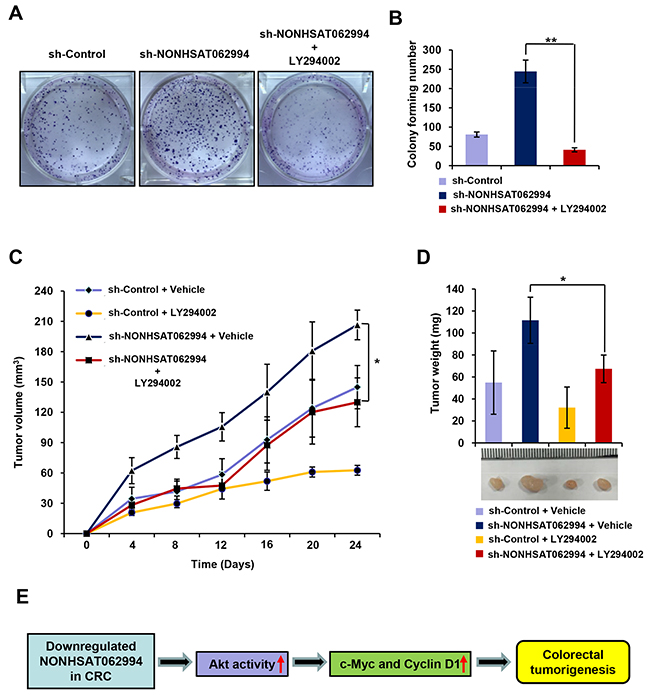 Emerging evidence has implicated aberrant expression of lncRNAs in cancer development and progression [11]. However, it remains unclear whether and how lncRNA NONHSAT062994 regulates cancer development and progression. In the current study, we reported for the first time that downregulation of the lncRNA NONHSAT062994 contributes to colorectal tumorigenesis by inactivating Akt signaling. In addition, NONHSAT062994 was downregulated in human CRC tissues and all CRC cell lines examined, suggesting that NONHSAT062994 may play a critical role in CRC. Analysis of the relationship between NONHSAT062994 expression and the clinical pathological characteristics of 86 CRC patients using tissue microarrays revealed a significant correlation between NONHSAT062994 expression and tumor size, suggesting that NONHS AT062994 plays an important role in colorectal tumorigenesis. Kaplan-Meier analysis revealed that lower NONHSAT062994 levels were closely associated with the OS of CRC patients. Thus, these findings suggest that NONHSAT062994 might be a novel prognostic marker for CRC.

In summary, the current study demonstrated that lncRNA NONHSAT062994 is downregulated in CRC tissues and cell lines, and provided the first evidence that NONHSAT062994 inhibits CRC cell proliferation and growth by inactivating Akt signaling. The critical role of NONHSAT062994 in colorectal tumorigenesis provides a candidate prognositc biomarker or a target for CRC prognosis and therapy.

A total of 32 human CRC tissues were obtained from the First Affiliated Hospital of Soochow University (Suzhou, Jiangsu, China) from 2015 to 2016. The expression of NONHSAT062994 was investigated using qPCR and ISH in primary CRC tumors and matched surrounding tissues. The correlation of NONHSAT062994 expression with patients’ clinicopathological variables and patients’ survival outcomes were illustrated using a CRC tissue microarray (Outdo Biotech Co., Ltd, Shanghai, China) containing 86 CRC samples with survival time. These samples were collected between 2006 and 2007. The study was approved by Soochow University for Biomedical Research Ethics Committee, and all of the patients provided informed consent. The clinical characteristics of all patients included in this study are listed in Table 1.

The SW480, HCT116, SW620, LS174T and RKO human CRC cell lines were purchased from the Cell Bank of the Chinese Academy of Sciences (Shanghai, China). These cells were cultured in RPMI-1640 medium containing 10% fetal bovine serum at 37°C in a humidified 5% CO2 atmosphere. However, The normal human colon mucosal epithelial cell line NCM460 was maintained in 50% DMEM and 50% RPMI-1640 medium containing 20% fetal bovine serum in a humidified atmosphere containing 5% CO2 at 37°C. All cell lines were passaged as previously described [4, 25].

In situ hybridization (ISH) was performed to detect the expression of NONHSAT062994 using the 5’ and 3’ digoxin-labeled LNATM-modified probe (5’-TG CAGAAATCCACGGGACCAGA-3’) (Exiqon, Vedbaek, Danmark). Briefly, after dewaxing and rehydration, the CRC tissue microarray were digested with proteinase K, fixed in 4% paraformaldehyde, and then hybridized with NONHSAT062994 probe at 55°C overnight. NONHSAT062994 expression was visualized by anti-DIG-AP conjugate antibody and NBT/BCIP substrate (Roche, Basel, Switzerland).

To determine the localization of NONHSAT062994 in CRC cells, we routinely ordered sets of FISH probe mix targeting NONHSAT062994 from commercial sources (RiboBio Co. Ltd., Guangzhou, China). FISH assay was carried out according to the instructions of the manufacturer. The images were taken with a Nikon ECLIPSE Ni scope with color camera and were processed by NIS-Elements D 4.10.00 software.

CRC cells were trypsinized into single-cell suspensions, then 0.5 × 103 cells were placed into each well of a 6-well plate and were cultured in RPMI-1640 medium containing 10% fetal bovine serum for 10-14 days, and then fixed and stained with Wright-Giemsa. The number of foci containing > 50 cells was counted.

Nude mice (4–5 weeks old, male, BALB/c) were injected subcutaneously with 2 × 106 CRC cells (n = 6 mice per group). After 7 days of transplantation, the size of the tumor was measured every 3 days. Tumors were removed for assessments after 4 weeks. For LY294002 treatment, LY294002 (25 mg/kg) was intraperitoneally injected into the nude mice every other day. The tumor volume was measured every four days. All animal experiments were approved by the Animal Care and Use Committee of Soochow University.

Each assay was performed in three independent experiments. Data were presented as mean ± s.d. Statistical significance was analyzed using Student’s t-test (unpaired, two-tailed). Pearson’s chi-square test was used to analyse the relationships between NONHSAT062994 expression and CRC patients’ clinicopathological factors, and Spearman’s rank Correlation analysis was used to calculate the correlations between the expression levels of NONHSAT062994 and c-Myc and Cyclin D1. The Kaplan-Meier survival analysis was used to illustrate the prognostic relevance of NONHSAT062994 in univariate analysis. p < 0.05 was considered statistically significant.