Testosterone deficiency is present in a certain proportion men with chronic heart failure (CHF). Low testosterone levels in American and European patients with CHF lead to the high mortality and readmission rates. Interestingly, this relationship has not been studied in Chinese patients. To this end, 167 Chinese men with CHF underwent clinical and laboratory evaluations associated with determinations of testosterone levels. Total testosterone (TT) levels and sex hormone-binding globulin were measured by chemiluminescence or immunoassays assays and free testosterone (FT) levels were calculated, Based upon results from these assays, patients were divided into either a low testosterone (LT; n = 93) or normal testosterone (NT; n = 74) group. Subsequently, records from each patient were reviewed over a follow-up duration of at least 3 years. Patients in the LT group experienced worse cardiac function and a higher prevalence of etiology (ischemic vs. no ischemic) and comorbidity (both P < 0.05). In addition, readmission rates of patients in the LT group were higher than that of patients in the NT group (3.32 ± 1.66 VS 1.57 ± 0.89). Overall, deficiencies in FT levels were accompanied with increased mortalities (HR = 6.301, 95% CI 3.187–12.459, P < .0001).

Chronic heart failure (CHF) is a major health problem throughout the world as the final outcome of almost all cardiovascular diseases [1–11]. It is associated with a high rate of hospitalization and a devastating prognosis, despite the availability of modern combinational therapies. The mortality rate of CHF is higher than that of most cancers, and more than 50% of CHF patients die within 5 years of diagnosis [12]. Different clinical feature were observed in men and women with CHF, such as symptoms, response to therapies, and mortality [13–15]. Statistical results show that more number of women than men suffer from CHF. Whereas, women with CHF can benefit much more from medication and have a higher age-adjusted survival rate than men. Therefore, it is reasonable to present the hypothesis that sex hormones may play a role in CHF.

Previous studies [16–18] have shown that a testosterone deficiency existed in men with CHF, and serum testosterone correlated inversely with ventricular ejection fraction, hemodynamics and exercise capacity. Moreover, deficiencies in anabolic hormones (testosterone, dehydroepiandrosterone sulfate, and insulin-like growth factor-1) can serve as predictors for poor prognosis [19]. Further evidence for this has emerged from several trials [20–22] demonstrating that testosterone replacement therapy is associated with significant increases in exercise tolerance, improvement of symptoms and amendments in the quality-of-life. To our knowledge, there are few data [19, 23–25] on the relationship between testosterone levels and 3-year outcomes (mortality and readmission rates) in men with CHF and yielded conflicting results. The aim of the our study was to evaluate the prospective effect of testosterone deficiency on the 3-year mortality and readmission rates in male patients hospitalized with CHF.

Table 1: Physical, clinical, and hormonal characteristics of patients with heart failure at the first admission

At the end of the 3-year follow-up period, there were 47 deaths (28% of all patients enrolled) with all deaths being cardiovascular. The LT group experienced a significantly higher mortality rate (42/93) as compared to the NT group (5/74) at this 3-year follow-up period (Table 2). This mortality rate was significantly greater in the LT versus NT group (

= 30.60, P < .0001) as shown in the Kaplan-Meier curves for cumulative survival rates of patients in the two groups (Figure 1). Of surviving patients, 86% experienced at least one unplanned admission resulting from a worsening of heart failure. Readmission rates were significantly greater in the LT (3.32 ± 1.66) as compared to the NT (1.57 ± 0.89) group (Table 2, Figure 2). Figure 3 shows the Kaplan-Meier curves for cumulative readmission rates for patients in the two groups. The LT group had a significantly higher readmission rates compared to the NT group ( 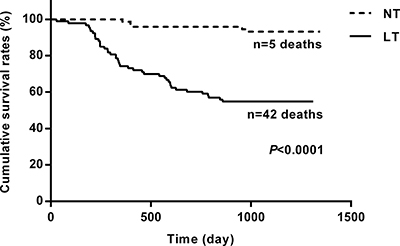 Figure 1: Kaplan-Meier curves for cumulative survival rates of patients in the two groups. The low testosterone group showed significantly higher mortality rates as compared with that of the normal testosterone group (P < .0001). 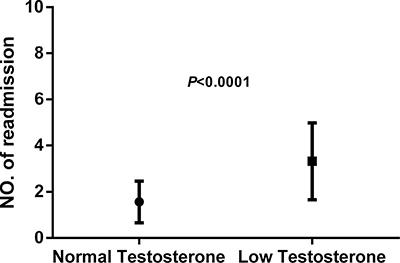 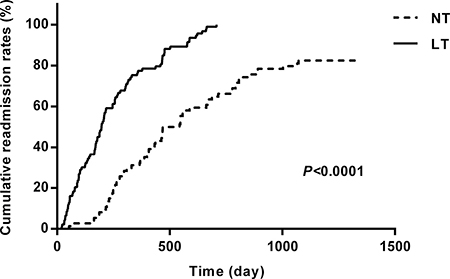 The salient results in this study of male Chinese patients with CHF include two major findings. First, CHF patients with decreased TT and FT concentrations experienced worse heart function compared with that in normal individuals. Second, a deficiency in testosterone was an independent risk predictor for mortality and readmission rates in men hospitalized with CHF.

Several published studies have suggested that patients with CHF had low androgen levels. In the present study, we determined serum levels of TT, which is the major component of androgens, and as well as FT, which reflects the most active fraction of circulating gonadal androgens and is directly related to biological effects on target tissues. Here we report that patients in LT group had worse cardiac function and higher prevalence of etiology (ischemicvs. no ischemic) and comorbidities (atrial fibrillation, hypertension and diabetes).

It is well known that testosterone exerts effects on contractile function of myocardium, vasodilation, insulin resistance, inflammation, coagulation, obesity, endothelial function and alteration in skeletal muscle [29–35]. In addition, testosterone concentration in serum reflects one aspect of anabolic insufficiency. Anabolic/catabolic imbalances not only can result in the activation of catabolism but the inhibition of anabolism, as well as the activation of the neuroendocrine and cytokine systems, which play an important role in the pathological processes of CHF. Such imbalances are related to the symptoms, signs and cardiac cachexia [36]. Therefore, it seems likely that the prognosis and high readmission rates associated with testosterone deficiency are the consequences of various and complex mechanisms that await further research [37, 38].

The study was performed between September 2009 and October 2011 in male Chinese patients hospitalized with CHF in Harbin. Male patients (N = 167), aged 36 to 87 years with NYHA functional class II, III or IV (40/66/61), participated in the study. The criteria for study enrollment were as follows: > 6 month symptomatic CHF; left ventricular ejection fraction (LVEF) ≤ 45% as assessed by echocardiogramphy; clinical stability and standard medications for at least 1 month preceding the study; no testosterone replacement or drugs that could affect testosterone levels, such as finasteride, opiates, glucocorticoids and anticonvulsants. In addition, enrollment required that the patients have an absence of heavy alcohol consumption, nephrotic syndrome, liver cirrhosis or cancer history.

The study protocol was approved by the ethics committees of the participating hospitals and all patients provided written informed consent.

Venous blood samples were collected in the morning between 06:00 and 07:00 following an overnight fast and after a supine rest of at least 15 minutes on the second day after hospital admission. Serum concentrations of total testosterone (TT) were measured by chemiluminescence (Siemens Corp., USA). The inter and intra assay variability coefficients for TT were 2.5% and 5.8%, respectively. Serum levels of SHBG were measured with ELISA (BL, Hamburg, Germany), and the inter and intra-assay variability coefficients were 5.2% and 3.0%, respectively. Serum levels of free testosterone (FT) were then calculated using the validated equation of Vermeulen et al. [39]. Testosterone deficiency, referred to as hypogonadism, was defined as a total testosterone < 300 ng/dL and free testosterone < 131 pmol/L [40, 41].

All CHF patients underwent clinical and laboratory evaluations, including physical examination, electrocardiogram, echocardiography, chest X-ray, full blood count, serum electrolytes and, if necessary, coronary angiography. Measurements, such as BNP and hemoglobin, were performed by the hospital biochemistry laboratory. Estimated GFR was calculated using the formula from the Modification of Diet in the Renal Disease Study Group.

Patients were reviewed regularly, with a follow-up duration extending for at least 3 years. The study investigators were provided with information regarding mortality and readmission rates (as of October 30, 2014) directly from patients and their relatives by periodic phone calls, or from the hospital system. No patient was lost to follow-up. The two endpoints included: (1) worsening of heart failure as indicated by readmission and/or (2) cardiac death, defined as death from worsening heart failure or sudden cardiac death.

In this sample of Chinese men with CHF, testosterone deficiency served as a predictor for the high rates of 3-year mortality and readmission. Our findings suggested the potential for beneficial effects of testosterone in the treatment of this condition.

There remain a number of limitations related to this study. First, the sample size was relatively small. Therefore, these data should be confirmed as based upon a larger sample of patients and preferably contain all NYHA functional classes especially class I. Second, patients enrolled in this study were limited to CHF patients with CHF who had experienced a significant cardiac event requiring hospitalization. Whether these findings would also be applicable to outpatients with stable clinical manifestations should be further investigation. Third, levels of FT and TT were measured at only one time point. It is not known whether FT and TT levels may fluctuate in CHF patients with CHF over the 3-year follow-up period. Nor is it known whether FT and TT levels decreased in NT patients over this 3-year period. Finally, our currents results do not provide any information regarding mechanisms by which testosterone deficiency predicts poor outcome and high readmission rate in men with CHF. Indeed, such mechanisms may involve a multi-factorial process and remains a subject for further investigation.