In the hTERT promoter region, there is a single nucleotide polymorphism (SNP), chr5:1,295,349 T>C (rs2853669, T349C), that has been shown to affect telomerase activity and telomere length.[7-9] This functional T349C SNP interferes with Ets2 transcription factor binding and lowers hTERT expression in both T/C heterozygotes and C/C homozygotes.[8] A recent study reported that the T349C SNP may even affect the clinical outcome of bladder cancer patients when paired with somatic mutations of C228T or C250T.[10] This common SNP has also been associated with breast cancer risk; however, these reports are controversial.[11-13]

The maintenance of telomere length is essential for cancer cell survival. Telomere lengthening in cancer cells can be explained by either telomerase-dependent or telomerase–independent mechanisms.[14] Considering the high frequency of hTERT promoter mutations glioblastomas, it is plausible that the majority of these cells have increased telomerase activity mediated by hTERT upregulation. This is strongly supported by recent studies.[3, 5, 15] However, no study has investigated hTERT expression in relation to the common SNP in glioblastomas. Furthermore, the reported clinical outcomes associated with hTERT expression or hTERT promoter mutations in glioblastoma are confusing.[5, 6, 15-18]

We investigated the hTERT expression status in glioblastoma samples and its association with clinical outcomes in conjunction with hTERT promoter mutations and the common SNP. We also examined the relationship between hTERT promoter genetic changes and other representative molecular glioma characteristics, such as MGMT promoter methylation, EGFR amplification, IDH1/2 mutation, 1p/19q LOH, and BRAF mutation.

The characteristics of patients whose samples were used in this study are summarized in Table 1. All of the 48 Asian (Korean) patients were histologically diagnosed with glioblastoma. Among them, 29 patients (60.4%) carried the C228T (n=22, 45.8%) or C250T (n=7, 14.6%) somatic mutations in an exclusively. These mutations are predicted to provide a new binding motif (TTCC) for Ets, as described previously (C228T;CTCC→TTCC or C250T; TCCC→TTCC).[2] The other 19 patients (39.4%) carried no somatic mutation in the hTERT promoter region. 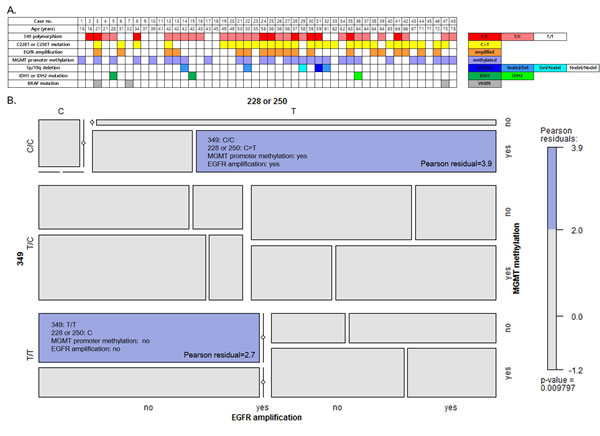 Figure 1: A. Distribution of hTERT promoter genetic events and other molecular characteristics in 48 glioblastoma patients. The cases are ordered by priority of age. B. Mosaic plot for somatic mutation (C228T or C250T) and common polymorphism (T349C) in the hTERT promoter region, MGMT promoter methylation and EGFR amplification. The colored cells show significant magnitude of the Pearson residuals (≥ 2.0) obtained from an independence model.

Among the clinical variables tested, there were significant differences in age distribution between the patients with and without C228T or C250T mutations (Figure 2). Patients with the C228T or C250T mutation were older (mean ± 95% CI, 56.6 ± 4.6 years) than those without the mutation (mean ± 95% CI, 43.2 ± 5.1 years, p=0.00). Other variables were not associated with the hTERT somatic mutations, and there were no specific age preponderances according to the hTERT common SNP genotypic groups. 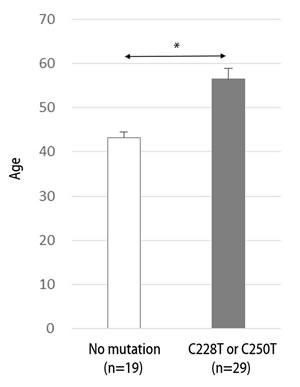 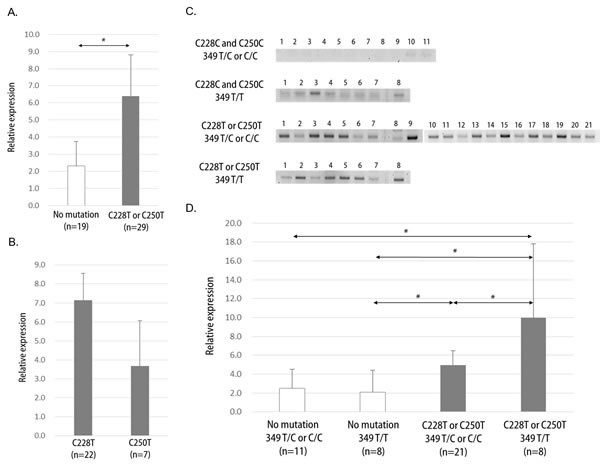 According to a survival analysis, neither hTERT promoter mutations (C228T or C250T) nor the common SNP (T349C) influenced OS and PFS (Figure 4). Subgroups defined by a combination of C228T or C250T and T349C failed to show an isolated survival outcome (Figure 4). There were also no differences in OS and PFS when the same analysis was done with age-categorized subgroups (data not shown). 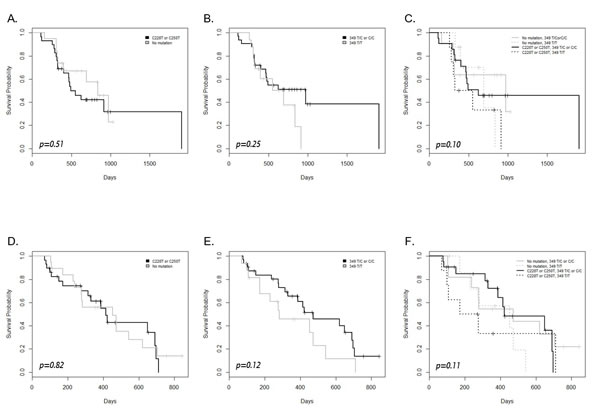 Figure 4: Kaplan–Meier survival plot and the log rank test results for overall survival (A-C) and progression-free survival (D-F) in patients with and without the hTERT promoter mutation, the common polymorphism, and their combination.

The evolution of cancer cells involves genetic and epigenetic changes that enable them to escape natural homeostatic controls. One example is unlimited cellular proliferation and immortality through permanent maintenance of telomere length. In 85-90% of human cancers, this occurs through upregulation of telomerase activity, while in 10-15% of cancers, it occurs through alternative lengthening of telomeres.[14] The hTERT gene encodes the catalytic reverse transcriptase subunit of telomerase.[20] Therefore, hTERT expression is closely linked to the upregulation of telomerase activity.[15] Because of the rare incidence of somatic mutations in coding region of hTERT in cancer cells, genomic events in the promoter region are thought to be the cause of aberrant hTERT expression.[21] The core promoter region of hTERT is about 180 bp upstream of the transcription start site and includes GC-rich sequences and multiple transcription factor binding motifs, such as Ets2, SP1, AP2, and c-Myc/Max.[22-24]

The C228T and C250T somatic mutations were the only mutations found in the hTERT promoter. These mutations provide an additional binding motif for Ets, which can lead to the upregulation of hTERT expression. The high frequency (60.4%) of the C228T and C250T mutations observed in the present study implies that the majority of glioblastomas depend on a telomerase-dependent mechanism for telomere length maintenance. As observed in our data and other studies,[3, 4] there is an obvious preponderance of C228T and C250T mutations in older glioblastoma patients, which provides more evidence for age-specific genetic characteristics in glioblastomas. This suggests that plural mechanisms for gliomagenesis likely exist in glioblastoma. Furthermore, the risk alleles for gliomas found by a genome-wide association study include hTERT related SNPs associated with an older age. These findings support distinct pathways of gliomagenesis in those with telomerase associated mechanisms for telomere maintenance.[25]

A high frequency of the common T349C SNP (66.6%) in glioblastoma is another interesting finding. This rs2853669 SNP is also associated with a risk for other cancer types, such as breast cancer and especially lung cancer in the Asian population.[11-13, 26] As summarized in Table 2, the Asian population has the highest A>G allele fraction, and the glioblastoma patients in the present study have significantly lower frequency of the T/T allele and higher T/C and C/C frequency. Considering the lower incidence of glioblastoma in the Korean population (age-standardized rate of 0.59 per 100,000 person-years)[27] compared with that in the United States (age-standardized rate of 3.19 per 100,000 person-years),[28] it would be interesting to determine the frequency of the T349C SNP in glioblastoma patients of other ethnic groups.

Theoretically and actually, a C228T or C250T somatic mutation in the hTERT promoter upregulates telomerase expression, as seen in the present study.[3, 5, 29] There is evidence that the T349C SNP is functional polymorphism that can affect hTERT expression and even telomerase activity and telomere length.[12] [7] [8] However, as observed in the present study, the major regulator of hTERT expression in glioblastoma appears to be a C228T or C250T somatic mutation, though the T349C SNP has modulation effects to some degree. Thus, the role of the T349C SNP may be tissue-specific. A recent study on bladder cancer reported the significance of a T349C SNP for down-regulating hTERT expression, which was strong enough to affect survival when coupled with an existing C228T or C250T somatic mutation.[10] On the contrary, the prognostic effect of telomerase activity or hTERT expression on survival outcomes in glioblastoma is limited.[15] We could not verify the prognostic effect of either a C228T or C250T somatic mutation or the T349C SNP in the hTERT promoter on survival in the present study. Although there is one report showing prognostic significance of hTERT promoter mutations in glioblastomas,[4] other studies show no impact on survival by hTERT promoter mutations.[5, 6] This evidence implies that hTERT is not the major player for therapeutic resistance, although it may be related to gliomagenesis. However, there are evidences that diverse targets for telomerase inhibition can play a role as an anticancer modulator at different levels of cellular process.[30-33] Therefore, further investigation for targeting telomerase is needed to verify the clinical significance of telomerase in cancer.

In conclusion, hTERT expression depends on somatic mutations in the hTERT promoter, and can also be modulated by a common polymorphism. Genomic changes in the hTERT promoter in glioblastoma appear to be associated with age and other representative molecular signatures. However, hTERT associated genomic changes appear to have limited value as an independent prognostic factor for glioblastoma clinical outcomes.

Clinical data and tissue samples from 48 histologically diagnosed glioblastoma patients were collected for the study. Fresh frozen tumor samples and white blood cells were used for DNA and RNA extraction for Sanger sequencing, quantitative real time-PCR (Q-PCR), and reverse transcriptase PCR (RT-PCR). Paraffin-embedded tumor tissues were used for methylation specific PCR (MS-PCR) and fluorescence in situ hybridization (FISH). Manually microdissected tumor areas from 6-μm unstained histologic sections were employed. All the patients were managed with a standard protocol of concomitant radiotherapy with temozolomide as a primary treatment. This study was approved by the local ethics committee, and written informed consent was obtained from all patients.

hTERT mRNA expression was analyzed by Q-PCR using a TaqMan® Gene Expression Assay (Hs00972650_m1; Applied Biosystems, Carlsbad, CA, USA). Housekeeping gene glyceraldehyde phosphate dehydrogenase (GAPDH) was used for the normalizer. Q-PCR assays were performed twice in triplicate for each sample. The mean hTERT level from the U87 cell line was used as the reference to calculate the relative expression using the 2-ΔΔCт method. For RT-PCR, identical primers, amplification conditions, and protocols were used as previously described.[15] The final products were resolved by electrophoresis in 2% agarose gels for visualization.

MS-PCR for the purpose of detecting the MGMT promoter methylation status was carried out as previously described.[36]

An analysis of 1p, 19q, and EGFR gene status was conducted by FISH using Vysis probes and interpreted as described previously.[37, 38]

Pearson contingency analysis was used to analyze mutual correlations of multiple genomic events and was expressed by mosaic plot. Significance of deviance is indicated by Pearson residuals ≥ 2 or ≤ -2 calculated from a chi-square test. Student’s t test and ANOVA were used to identify significant differences in distributions of variables and levels of gene expression. Data are presented as the mean ± 95% confidential interval (CI) of three or more separate experiments, and a p value of 0.05 was considered to be the cutoff for statistical significance.

We’d like to thank Min-Jung Park, R.N. (Department of Neurosurgery, Seoul National University Hospital) for her effort in clinical data management. This research was supported by the Basic Science Research Program through the National Research Foundation of Korea (NRF) funded by the Ministry of Education, Science and Technology (2012R1A1A2003779) and by a grant from the Seoul National University Research Fund (800-20130069).

23. Horikawa I and Barrett JC. Transcriptional regulation of the telomerase hTERT gene as a target for cellular and viral oncogenic mechanisms. Carcinogenesis. 2003; 24(7):1167-1176.

33. Mitchell TR and Zhu XD. Methylated TRF2 associates with the nuclear matrix and serves as a potential biomarker for cellular senescence. Aging. 2014.

37. Kim B, Myung JK, Seo JH, Park CK, Paek SH, Kim DG, Jung HW and Park SH. The clinicopathologic values of the molecules associated with the main pathogenesis of the glioblastoma. Journal of the neurological sciences. 2010; 294(1-2):112-118.