Primary testicular lymphoma (PTL) is a rare and aggressive form of extranodal lymphoma. Approximately 80–98% of PTLs are diffuse large B-cell lymphoma (PT-DLBCL). The prognosis of DLBCL patients has improved with the addition of rituximab to systemic chemotherapy, but outcomes of PT-DLBCL remain poor. This may be explained by the high rate of relapse in the central nervous system (CNS) and contralateral testis. We analyzed 1,132 newly diagnosed DLBCL patients (37 with PT-DLBCL) who were treated at our hospital between January 2009 and December 2014. Twenty-five patients finished follow-up. We analyzed clinical characteristics, response to chemotherapy, overall survival, and relapse in the CNS and contralateral testis. All patients underwent orchiectomy. The median age was 60 (range: 43–82) years. Eleven patients had stage III/IV disease. Five patients experienced CNS relapse, and three experienced relapse in the contralateral testis. Median overall survival (OS) was not reached at the time of reporting. The 3-year OS rate was 57%. None of the nine patients who received radiotherapy to the contralateral testis experienced relapse in that location. Intrathecal prophylaxis did not reduce the risk of CNS relapse. All five patients who experienced CNS relapse had the germinal center B-cell-like subtype of DLBCL.

Primary testicular lymphoma (PTL) is a rare and aggressive form of extranodal lymphoma. It accounts for 1–2% of all non-Hodgkin’s lymphomas (NHLs) and 4% of extranodal lymphomas [1]. Approximately 80–98% of PTLs are diffuse large B-cell lymphoma (PT-DLBCL) [1]. The overall prognosis of DLBCL patients has improved with the addition of rituximab to systemic chemotherapy [2–5]. However, the outcomes of PT-DLBCL patients remain poor owing to the high rate of relapse in the central nervous system (CNS) and contralateral testis [1]. Thus, prophylactic intrathecal chemotherapy and radiation therapy (RT) to the contralateral testis are recommended for these patients [6]. Few studies of PT-DLBCL have been reported [7–11], particularly in China. We retrospectively reviewed the clinical data of DLBCL patients to analyze the clinical features of PT-DLBCL in a Chinese population.

The clinical characteristics of the patients are summarized in Table 1. The median age was 60 (43–82) years. Bilateral testicular involvement was observed in two patients (8%). Eleven patients (44%) presented with stage III/IV disease. Patient 15 had spleen involvement. No other patients had involvement of extranodal sites. There were six patients (24%) who were diagnosed with the germinal center B-cell-like (GCB) and 19 (76%) with the non-GCB subtype. The mean Ki67 index was 63% (range, 30%–95%). Five patients were CD10-positive and 24 were MUM-1-positive. BCL-2 expression was observed in 18 of 25 patients.

Evaluation of treatment and prognosis 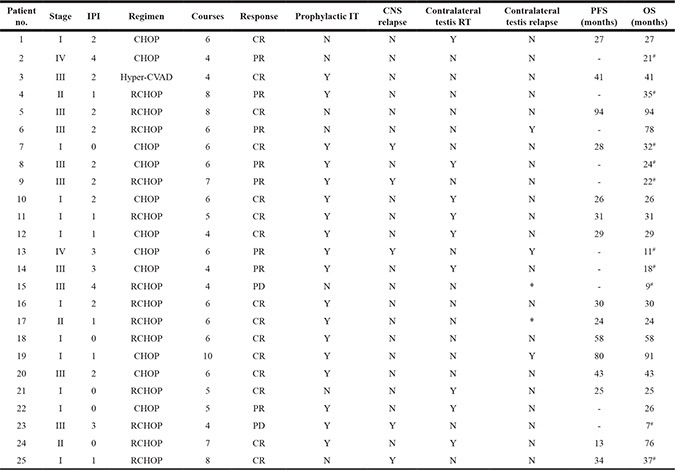 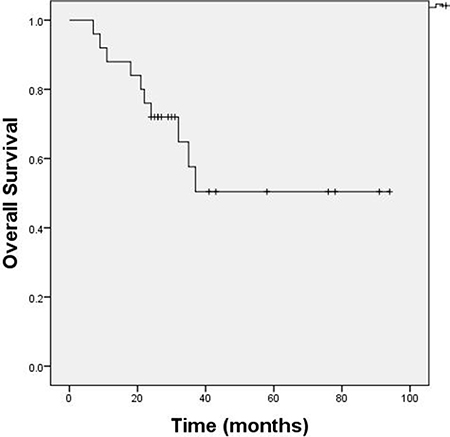 Figure 1: OS of PT-DLBCL patients. Median OS was not reached at the time of reporting. The 3-year OS rate was 57%.

Relapse in the contralateral testis

We analyzed 37 patients with PT-DLBCL who underwent orchiectomy in our Urology department. Twelve patients refused transfer to the Hematology or Chemotherapy departments for additional treatment because of advanced age or financial problems. The other 25 patients with PT-DLBCL were treated with CHOP, RCHOP, or Hyper-CVAD following orchiectomy. All patients completed the median follow-up period of 29 months (range, 7–94 months). Eleven patients (44%) were diagnosed with stage III/IV disease, which was a higher proportion than in other studies [7, 8]. Median OS was not reached at the time of reporting. The 3-year OS rate was 57%.

There were 11 patients who received CHOP and six (54.5%) achieved CR. Thirteen patients received RCHOP and eight (61.5%) achieved CR. The other patient who received hyper-CVAD treatment containing high-dose methotrexate achieved CR. Several retrospective studies [7, 8, 12] have analyzed the effects of rituximab on patient outcomes in PTL and have achieved inconsistent results. The addition of rituximab to systemic chemotherapy improved 5-year OS but not PFS in a study from MD Anderson Cancer Center [7], and PFS in a Chinese study from China [8]. No improvement in patient outcomes was observed in a study from the British Columbia Cancer Agency [12]. Deng et al. [13] demonstrated that rituximab reduced the risk of relapse (P = 0.022) and improved both PFS (P = 0.012) and OS (P = 0.027) in PT-DLBCL patients (5-year PFS, 56% vs. 36%; 5-year OS, 68% vs. 48%). These differences may be explained by the small sample size, biased patient selection, and the lack of data regarding systemic therapy.

Our retrospective study has several limitations. The small study population, variable treatment protocols, and relatively short follow-up period made it difficult to identify relevant prognostic factors. Additionally, OS was worse than in other retrospective studies because many patients had advanced stage disease and high IPI scores. This could be explained by a lack of financial support, advanced age, and shame associated with visiting a doctor for a genital-related disease.

According to the 2016 version of the World Health Organization classification of lymphoid malignancies, PT-DLBCL is classified under DLBCL not otherwise specified. However, our findings suggest that PT-DLBCL is a unique subtype of DLBCL. Although most patients (60% in our study and 86–97% in other trials [9, 13, 19]) achieved CR after systemic chemotherapy, PT-DLBCL was associated with a high risk of relapse. Thus, additional clinical trials are required to improve the treatment of these patients.

We reviewed the clinical data of 1,132 newly diagnosed patients with DLBCL who were treated at the First Affiliated Hospital of Medical School of Zhejiang University between January 2009 and December 2014. Of these patients, 37 had primary involvement of the testis. All the patients underwent orchiectomy and a comprehensive examination including blood count, liver and kidney function, lactate dehydrogenase (LDH), β2-microglobulin, and coagulation function tests. All diagnoses were confirmed by histology according to the World Health Organization Classification. Twelve patients did not receive either chemotherapy or RT. Complete clinical profiles were obtained for the remaining 25 patients who completed follow-up. Clinical staging and diagnostic methods included a clinical history and physical examination, positron emission tomography-computed tomography, chest, abdominal, and pelvic computed tomography, color Doppler ultrasound, and bone marrow aspiration and biopsy. Tumor response was classified as complete response (CR), unconfirmed complete response (CRU), partial response (PR), stable disease (SD), or progressive disease (PD) according to the International Workshop Criteria [20].