Paired box gene 5 (PAX5), a member of the paired box gene family, is involved in control of organ development and tissue differentiation. In previous study, PAX5 promoter methylation was found in gastric cancer (GC) cells and tissues. At present study, we found that the inconsistently methylated levels of PAX5 promoter were identified in the different GC tissues. The methylated CpG site count and the methylated statuses of four CpG sites (-236, -183, -162, and -152) were significantly associated with the survival of 460 GC patients, respectively. Ultimately, the methylated CpG -236 was the optimal prognostic predictor of patients identified by using the Cox regression with AIC value calculation. These findings indicated that the methylated CpG -236 of PAX5 promoter has the potential applicability for clinical evaluation the prognosis of GC.

In addition to Japan and Korea, China is the third highest incidence of gastric cancer (GC). With 42% of worldwide cases occurring, GC has been a major health burden in China [1]. Due to lack of the highly specific biomarkers of carcinogenesis and prognostic evaluation, the overall survival (OS) of GC is still dismal regardless of the improvements of therapeutic techniques [2]. PAX5, a member of the paired box gene family, is involved in control of organ development and tissue differentiation [3]. Although researchers reported that PAX5 expression was detected in non-hematopoietic tumors such as neuroendocrine tumors, Merkel cell carcinoma, and mesonephric tumors [3, 4], Kolhe et al [5] demonstrated that pulmonary small cell carcinoma was negative PAX5 expression of the immunohistochemical staining. Several researchers demonstrated that the methylation of PAX5 DNA promoter was frequently found in human malignancies [6-8]. In previous study, our collaborators demonstrated that PAX5 is a novel functional tumor suppressor in GC and PAX5 promoter methylation was relative to the survival of GC [8]. In view of the small scale patients and only the qualitatively detective method of the promoter methylation in that study, we intended to detect the quantitatively methylated levels of PAX5 DNA promoter in the large scale patients for elaborate elucidation the prognostic predicted value of PAX5 promoter methylation in GC.

All 460 GC patient clinicopathological characteristics are listed in Table 1. The median OS of all patients was 21 months. Of 460 patients, 61 (13.26%) were alive when the follow-up was over. 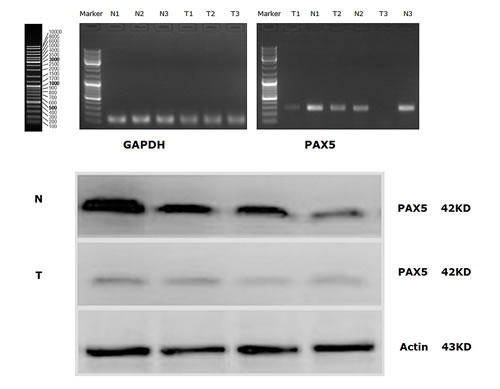 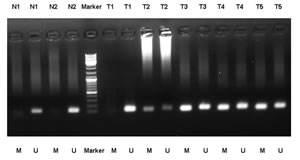 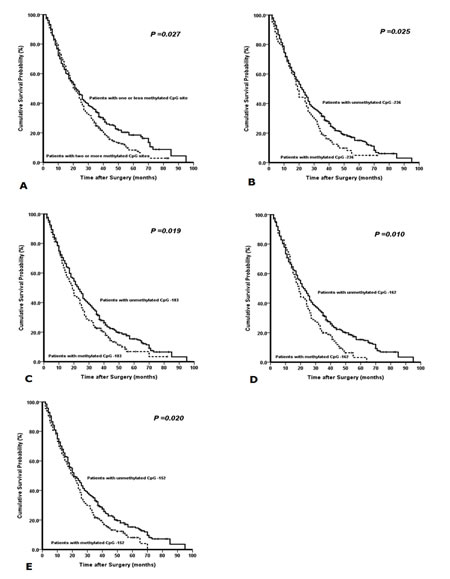 Lastly, we demonstrated that the methylated status of CpG -236 of PAX5 promoter had the smaller AIC value than anyone of other independent predictors calculated within the Cox proportional hazard regression model, representing the optimal prognostic predictor of GC (Table 3).

PAX proteins function as nuclear transcription factors important for cellular differentiation, migration, and proliferation [9]. These molecules have been considered as the strong transcriptional regulators and targets for disruption in oncogenesis [9]. Pax5, an important B cell lineage commitment factor in the early stages of B cell development, is essential for B cell lineage commitment [10]. In addition to the hematopoietic tumors, PAX5 expression was detected in several solid malignacies [3-5]. Torlakovic et al [11] reported that Pax-5 was expressed regularly in poorly differentiated neuroendocrine tumors, benign and malignant mesonephric tissues, and müllerian duct-derived tumors. Authors considered that those results were important for correct interpretation of results in immunophenotyping of undifferentiated tumors, for diagnosis of mesonephric carcinoma, and, potentially, for correct classification of neuroendocrine tumors in small biopsy samples [11]. Dong et al [4] reported the expression of PAX5 in neuroendocrine carcinomas such as Merkel cell carcinoma (93.5%) and small cell carcinoma (73.3%). Other researchers demonstrated that the low or loss expression of PAX5 was detected in the human cancers, which indicates PAX5 may function as a potential tumor suppressor in the carcinogenesis [5-8]. Methylation of promoter CpG islands is one type of epigenetic modification that regulates gene expression, and the hypermethylation of promoter CpG islands of tumor suppressor genes has been identified in many different cancers [12]. Recently, authors demonstrated that PAX5 DNA promoter methylation, resulting in the silencing of PAX5, was frequently detected in the several malignancies and was negatively associated with the poor clinical outcome of patients [6-8, 13, 14]. Palmisano et al [13] demonstrated that inactivation of the PAX5 β gene likely contributed to neoplastic development by inhibiting growth regulation through effects on CD19 gene expression. They also proposed that methylation of the PAX5genes was found only in tumors and surrounding tissue, and only rarely in normal epithelial cells, which supported their evaluation as intermediate markers in lung and breast cancer for improvement the sensitivity and specificity to develop risk models for detecting these cancers [13]. Similarly, we also found that the silencing of PAX5 in the GC tissues and the methylation of PAX5 promoter was specific in the GC tissues. Therefore, we thought that PAX5 functioned as a tumor suppressor gene in GC.

In 2011, our collaborators reported that PAX5, a functional tumor suppressor involved in liver carcinogenesis through direct regulation of the p53 signaling pathway, was frequently inactivated by promoter methylation in primary hepatocellular carcinoma tissues [7]. Last year, Li et al [8] reported that the downregulation of PAX5 was closely linked to the promoter hypermethylation status and the ectopic expression of PAX5 in silenced GC cell lines (AGS and BGC823) inhibited colony formation and cell viability, arrested cell cycle, induced apoptosis, suppressed cell migration and invasion and repressed tumorigenicity in nude mice. They also demonstrated that PAX5 hypermethylation was detected in 77% (144 of 187) of primary GC tissues, which was significantly associated with the poor survival of GC patients [8]. At present study, we also found that mRNA and protein expression of PAX5 was down-regulated in the GC tissues, and the inconsistent levels of PAX5 promoter methylation were exclusively detected in GC tissues by using the MSP method. However, we think that it is important to confirm the levels of PAX5 promoter methylation for further elucidation the values of PAX5 DNA methylation in canceration and prognostic evaluation of GC.

For PAX5 promoter methylation analysis, we collected 460 fresh GC tissues from GC patients who underwent curative gastrectomy between April 2003 and December 2007 at the Department of Gastroenterology, Tianjin Medical University Cancer Hospital. In addition, a cohort of 25 normal gastric mucosal epithelial tissues derived from normal people between 2004 and 2007 at the Department of Endoscopic Examination and Treatment, Tianjin Medical University Cancer Hospital. All the tumor and normal gastric mucosal epithelial tissues were histologically verified, and were used to detect the methylated status of PAX5 promoter by means of the bisulphite sequencing (BSP). Of 460 GC tissues, 25 were used to detect PAX5 expression and detect qualitative methylation of PAX5 DNA by means of the methylation-specific PCR (MSP).

All patients were not administered radiation, chemical or biological treatment prior to the potentially curative gastrectomy. Adjuvant chemotherapy or radiotherapy was not routinely administrated in patients routinely. The clinicopathological characteristics of these 460 GC patients are summarized in Table 1. The patients’ consent was obtained for the use of the tissue samples and records, and the study protocol was approved and permission for use of the clinical data was given by the Institutional Research Ethics Committee of Tianjin Medical University Cancer Hospital.

Curative resection was deﬁned as a complete lack of grossly visible tumor tissue and metastatic lymph nodes remaining after resection, with pathologically negative resection margins. Primary tumors were resected en bloc with limited or extended lymphadenectomy (D1 or D2-3 according to the Japanese Gastric Cancer Association (JGCA)). Surgical specimens were evaluated as recommended by the sixth UICC TNM classification for GC.

The expression of PAX5 mRNA was detected by RT–PCR in 25 of 460 GC tissues and 25 normal gastric mucosal tissues. Total RNA was reversely transcribed to cDNA in a 20 ul volume by using Reverse Transcription kit (Invitrogen, Carlsbad, CA). Primers designed and utilized for PAX5 was as follows: Forward sequence: 5’-CCTGAAGGTCCGACTGAGAAG-3’, and Reverse sequence: 5’-GATACTAAAGAAGGAGGGATGAGC-3’. The GAPDH gene was used as an endogenous control for semi-quantitative DNA-PCR. Primers designed and utilized for GAPDH was as follows: Forward sequence: 5’-GAAGGTGAAGGTCGGAGTC-3’, and Reverse sequence: 5’-GAAGATG GTGATGGGATTTC-3’. The PCR Cycling conditions for all sequences were 35 cycles of denaturation at 95°C for 3 minutes, annealing at 94°C for 30 seconds, and extension at 56°C for 30 seconds followed by a final extension at 72°C for 8 minutes. All PCR product electrophoreses were performed on a 2% agarose gel with ethidium bromide and visualized using the Gel Imager system (Asia Xingtai Mechanical and Electrical Equipment Company, Beijing, China).

All 460 GC tissues and 25 normal gastric mucosal tissues were detected the qualitatively methylated analysis of PAX5 promoter with the bisulphite genomic sequencing (BGS). Hot start PCR with the bisulfite-treated DNA was performed with a 197bp PCR product spanning promoter region −321bp to -130bp relative to the transcription start site of PAX5. 11 CpG sites were contained in the promoter region of PAX5. The sequences of PCR primers were as follows: F：5’-GTGTTTGGTAATATTGTTAGTTTTTGTAAT-3’; R：5’-CAACCRCACCCTCTATTAAAACATAC-3’. The purified PCR products were cloned into the pUC18-T vector (Biodee, Beijing, China), and no less than five positive clones for each sample were randomly selected and sequenced by Shanghai Sangon Co. (Shanghai, China).

After curative surgery, all patients were followed every 3 or 6 months for 2 year at outpatient department, every year from the third to fifth years, and then annually thereafter until the patient died. The median follow-up for the entire cohort was 44 months (range: 2-104). The follow-up of all patients who were included in this study was completed in December 2012. Ultrasonography, CT scans, chest X-ray, and endoscopy were obtained with every visit.

The median OS was determined by using the Kaplan-Meier method, and log-rank test was used to determine significance. Factors that were deemed of potential importance on univariate analyses (P <0.05) were included in the multivariate analyses. Multivariate analysis of OS was performed by means of the Cox proportional hazards model with forward step procedures. Hazard ratios (HR) and 95% CI were generated. The Akaike information criterion (AIC) value within a Cox proportional hazard regression model was calculated for different variables to measure theirs prognostic prediction ability. A smaller AIC value indicates a better model for predicting outcome [19]. With the cut-point survival analysis [20], the optimal cutoff for CpG site conut was identified to be one. Significance was defined as P < 0.05. All statistical analyses were performed with SPSS 18.0 software.