Although an estimated 38,000 [1] patients are diagnosed with breast cancer in the US each year death rates are declining in part due to adjuvant therapies including the use of ER-antagonists and anti-HER2 (trastuzumab) therapy [2-4]. Nonetheless, approximately 30% of treated BC patients develop distant metastases [5] and these significantly account for 90% of breast cancer deaths [6]. Consequently, therapeutic strategies are needed that target metastasis [7, 8].

Metastasis formation involves migration of malignant cells from the primary tumour via lymphatic or blood vessel routes with the process being tightly regulated by exogenous cell signalling molecules, including ligands to G protein-coupled receptors (GPCRs) such as neurotransmitters and chemokines [9, 10]. In previous in vitro cell migration studies we have shown that the stress catecholamine hormone norepinephrine is a potent inducer of migratory activity in carcinoma cell lines of colon [11], prostate [12], ovarian cancer cells [13] and breast [14] tissue origin, and this finding has been confirmed in a mouse model [15]. Moreover, we have shown that cell migration is mediated by adrenergic receptors (AR) and that the process is inhibited by the beta-blocker adrenergic receptor antagonist drug propranolol which is non-selective for 1AR and 2AR [11, 12, 15]. Additional support for the therapeutic benefit of beta-blockers is provided by recent studies showing propranolol can reduce proliferation in human pancreatic cell lines [16, 17].

Beta-blocker drugs along with ACE-inhibitors, calcium channel antagonists, imidazoline receptor antagonists, and diuretics are clinically well characterized for the therapeutic treatment of hypertension and are proven in reducing life-threatening cerebrovascular events [18, 19]. Epidemiologic studies confirm that beta-blocker treatment per se has no effect in causing or promoting cancer growth giving reassurance for their continued clinical use [20, 21].

Data was obtained for 466 breast cancer patients used in this study and their characteristics are shown in Tables 1a-d. A total of 92 (19.7%) patients had hypertension diagnosed prior to breast cancer diagnosis and were therapeutically treated using a range of antihypertensives including beta-blockers, ACE inhibitors, Ca2+ antagonists, imidazoline receptor antagonists or diuretics (Table 2). In particular, 43/92 (46.7%) of this hypertensive subgroup (median age 57 years, range 39-69) received beta-blocker drugs while the remaining 49/92 (53.3%) patients received other antihypertensive drugs. The latter group significantly differed in showing increased median age of 62 years (range 47-70) compared to the non-hypertensive patient subgroup whose median age was 54.5 years (range 28-71). In addition, the non-beta-blocker treated antihypertensive subgroup contained an increased proportion of post-menopausal patients (Table 1c) Otherwise, no significant difference was seen in tumour stage, tumour size, grade, type, vascular invasion, Nottingham Prognostic Index (NPI) or AT between the three patient subgroups. 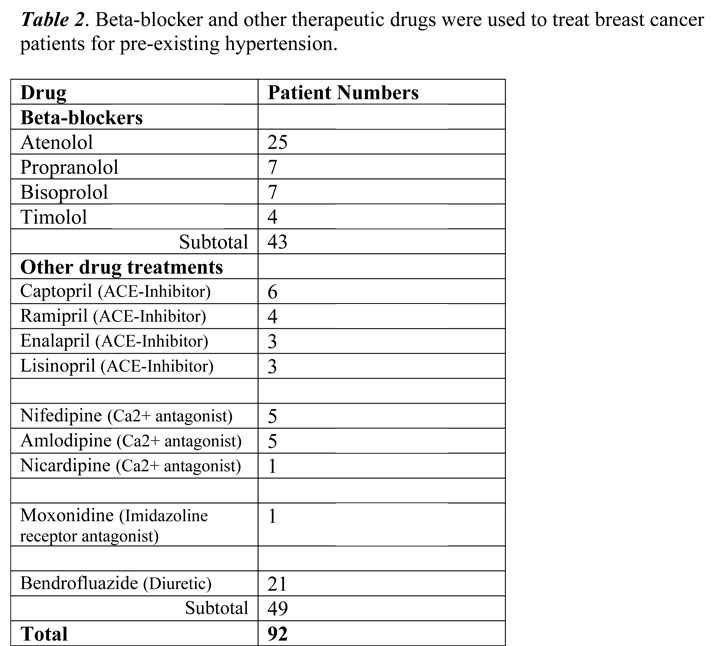 Table 2: Beta-blocker and other therapeutic drugs were used to treat breast cancer patients for pre-existing hypertension. 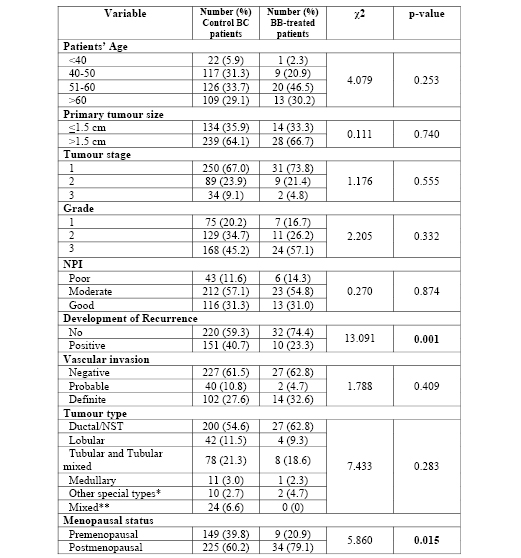 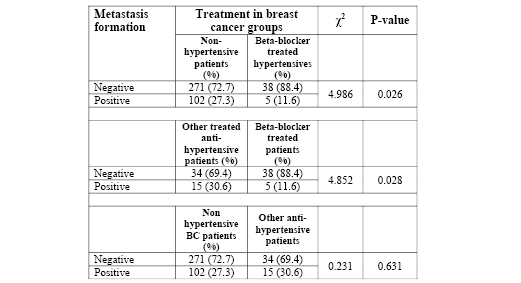 Table 3: Two hypertensive breast cancer (BC) patient groups comprising those treated with beta-blockers and non-beta blocker antihypertensive drugs were compared with a non-hypertensive non-treated BC group for formation of distant metastases. 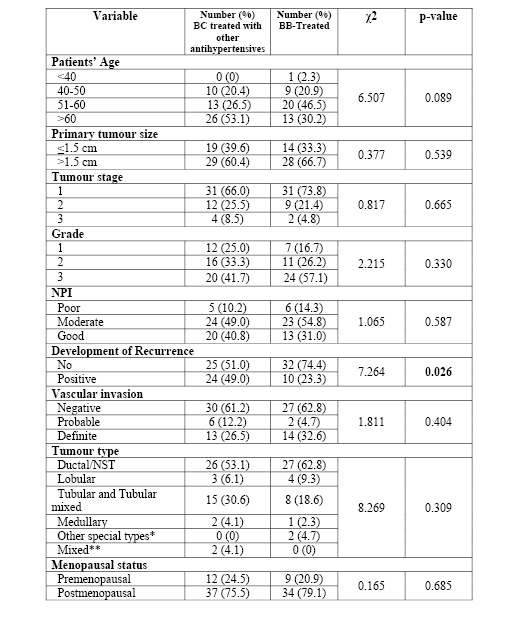 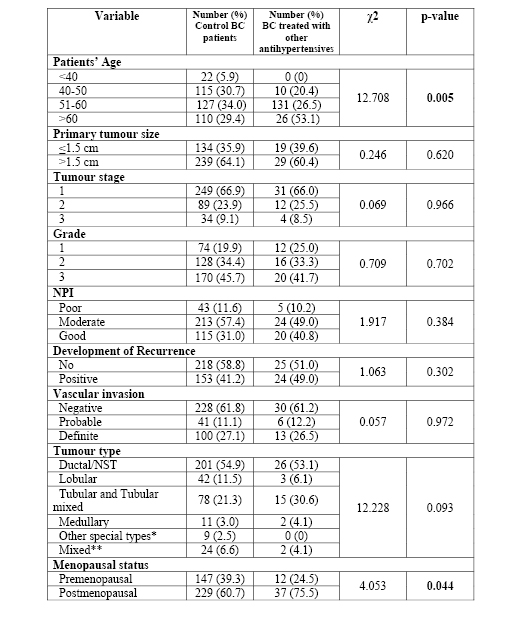 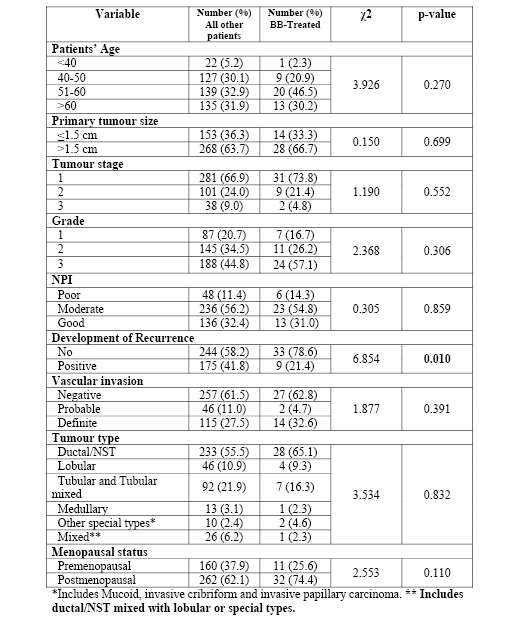 Table 1d: Characteristics for breast cancer patients therapeutically treated with beta-blockers (BB) compared to all other patients including those receiving other antihypertensive drug treatment. 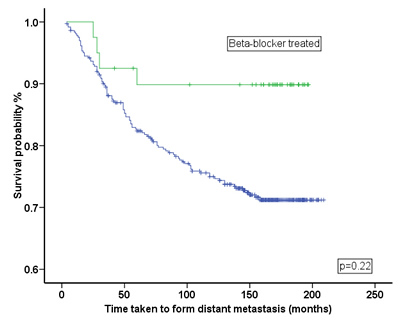 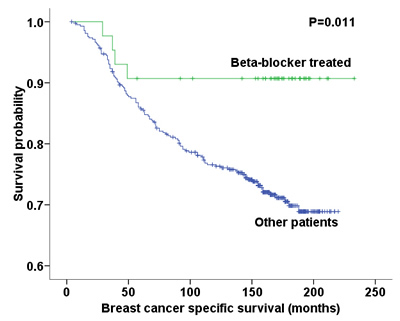 Table 4: The effect of beta-blocker treatment on breast cancer specific survival (BCSS) and distant metastasis (DM) formation was compared with tumour size, grade and stage to determine the relative risk (Hazard Ratios (HR)) in BC patients.

Tumour metastasis is a complex process and is associated with generally poor clinical outcome. Therapeutic strategies are needed that can prevent its occurrence, thereby prolonging patient life. The present study was performed to validate the putative role of beta-blocker adrenergic receptor antagonists in retarding the progress of breast cancer disease by reducing metastasis formation. We performed an epidemiological study of breast cancer patients with long term clinical follow up (>10 years) and showed that patients receiving antihypertensive beta-blocker drugs significantly benefit by a 57% reduction in distant metastasis formation and a 71% reduced risk of dying from breast cancer compared to control patients.

It is increasingly being recognised that stress can promote cancer progression through an indirect effect on the immune system [22]. Moreover, a biological mechanism of action has been proposed for the involvement of catecholamine stress hormones. It has been shown that norepinephrine can directly stimulate tumour cell migration and this effect is mediated by the beta-adrenergic receptor, β 2AR. High levels of β2AR have been reported in human cell lines [11, 23, 24] and tumour samples [25] and importantly, we have shown that cell migration in a number of cancer models is inhibited by the beta-blocker adrenergic receptor antagonist, propranolol [11, 12, 14].

The aim of the current study was to translate these findings into a clinical setting by testing the hypothesis that breast cancer patients receiving beta-blockers for pre-existing hypertension would show a significant reduction in tumour metastasis with a consequent reduction in mortality.

In line with expectations, antihypertensive drug treatment was more frequently prescribed in older post-menopausal patients with no significant difference seen between the beta-blocker and other antihypertensive treatment subgroups. The beta-blocker treated subgroup was shown to have significantly (57%) reduced risk of developing distant metastasis and tumour recurrence compared to patients receiving either no, or other types of, antihypertensive drugs. As a consequence of this, beta-blocker treated patients showed a significant increase in breast cancer specific survival and increased disease free interval. To the best of our knowledge, this is the first report highlighting the in vivo therapeutic benefits of beta-blockers in breast cancer patients, supporting the biological mechanism of norepinephrine-induced cell migration mediated by adrenergic receptor activation as shown in cell lines and animal models. These findings support recent epidemiological cancer studies that have shown adrenoceptor antagonists have the potential for providing a novel clinically effective therapeutic strategy in treating several different cancer types. Beta-blockers have been shown to reduce the incidence of endocrine-regulated prostate cancer [26], but this beneficial effect is not just limited to inhibition of beta receptors because patients receiving alpha antagonists also show a reduced incidence of prostate [27] and bladder [28] cancer. Moreover, a generalised reduction in all cancer types has been reported in beta-blocker treated patients [29].

Several limitations apply to our epidemiological study including patient population size and factors that were not controlled for in using an existing patient dataset. In mitigation, the beta-blocker and other hypertensive-treated cohort were of approximately the same size and together accounted for approximately 20% of the total patient cohort. In addition, all patient subgroups were evenly matched for adjuvant therapy and age making it unlikely that this was the reason for the significant benefits seen in the beta-blocker group. A further possible limitation is that it is unknown (and impossible to establish) how long patients had breast cancer prior to a formal diagnosis, and so the duration required for beta-blockers to prevent development of metastases can not be calculated from this type of study. Some of these limitations can be addressed by performing a much larger epidemiological study, leading onto a randomised controlled clinical trial. The latter would determine a) If beta-blocker drugs can be used as a prophylactic for metastatic formation in breast cancer, b) The optimal adjuvant therapy dosage in breast cancer, c) Whether beta-blocker treatment is effective in clinically treating patients with other types of cancer, e.g. prostate, pancreatic and colonic cancer, suggested by our cell line models.

The current study suggests that adrenoceptor antagonists have the potential for retarding breast cancer progression and improving clinical outcome. Additional studies are needed to assess the protein expression of adrenoceptors in breast and other cancer types to test if they can be used as prognostic and predictive biomarkers in determining clinical outcome and likely response to antagonist treatment.

Therapeutic drug and medical history was obtained for 466 patients with stage I and II primary operable breast carcinoma, aged 71 years or less, who presented consecutively to the Nottingham City Hospital between 1987 and 1994 as previously reported [30]. Patients were placed into one of three subgroups according to whether they received (1) beta-blocker treatment for hypertension, (2) other antihypertensive drug treatment, or were (3) normotensive. To qualify for subgroup (1) or (2) membership, patients needed to have been receiving antihypertensive therapy for at least 1 year prior to breast cancer diagnosis. This criterion was applied to minimise differences due to length of drug treatment; patients that received hypertensive drugs for less than 1 year were excluded because the primary objective tested was that beta-blockers may have a role in preventing metastasis formation in early stage breast cancer rather than eradicating or neutralising established primary and secondary cancers.

Patient’s clinical and pathologic data was available including age, histologic tumour type, primary tumour size, lymph node status and histologic grade, Nottingham prognostic index (NPI), vascular invasion (VI), and radio/chemotherapy. Patients were considered for adjuvant therapy (AT) in a standardised scheduled on the basis of prognostic and predictive factor status including Nottingham Prognostic Index (NPI) [31], oestrogen receptor-α (ERα) status, and menopausal status. Patients with a good prognostic index (NPI ≤ 3.4) did not receive AT. Hormonal therapy (HT) was prescribed to patients with ERα+ tumours and NPI scores of >3.4 (moderate and poor prognostic groups). Pre-menopausal patients within the moderate and poor prognostic groups were candidates for CMF (Cyclophosphamide, Methotrexate, and 5-Flourouracil) chemotherapy; patients with ERα+ tumour were also offered HT. Conversely, postmenopausal patients with moderate or poor NPI and ERα+ were offered HT, while ERα- patients received CMF. Data has been accrued on a prospective basis for breast cancer specific survival (BCSS), disease free interval (DFI), formation of distant metastases (DM) and local tumour recurrence. BCSS was defined as the time (in months) from the date of the primary surgical treatment to the time of death from breast cancer. DFI was defined as the interval (in months) from the date of the primary surgical treatment to the first locoregional or distant metastasis. Mean follow-up time was 124 months for the study cohort.

We thank the ministry of higher education (Egypt) for funding HO Habashy. Supported in part by Fritz-Bender-Foundation, Munich. In addition, the kind assistance of Mrs Pat Ward and the Medical Records department is acknowledged.

The authors do not have any conflicts of interest to declare.

4. Spears M, Bartlettt J, The potential role of estrogen receptors and the SRC family as targets for the treatment of breast cancer. Expert Opinion on Therapeutic Targets 2009;13: 665-674.