*Both authors contributed equally to this work

This study assessed whether combining adipose-derived mesenchymal stem cells (ADMSC) with preactivated, disaggregated shape-changed platelets (PreD-SCP) was superior to either therapy alone for protecting rat lung from acute respiratory distress syndrome (ARDS) complicated by sepsis. ARDS and sepsis were induced through 100% oxygen inhalation and peritoneal administration of 1.5 mg/kg lipopolysaccharide (LPS), respectively. Adult-male Sprague-Dawley rats (n=40) were randomized into sham-control (SC), ARDS-LPS, ARDS-LPS-ADMSC (1.2x106 cells), ARDS-LPS-PreD-SCP (3.0x108, intravenous administration), and ARDS-LPS-ADMS/PreD-SCP groups, and were sacrificed 72 h after 48 h ARDS induction. Lung injury scores (LIS) and collagen deposition were highest in ARDS-LPS, lowest in SC, higher in ARDS-LPS+ADMSC than in ARDS-LPS+PreD-SCP and ARDS-LPS+ADMS/PreD-SCP, and higher in ARDS-LPS+PreD-SCP than in ARDS-LPS+ADMS/PreD-SCP (all p<0.0001). Alveolar-sac numbers, oxygen saturation, endothelial marker levels, and mitochondrial cytochrome-C levels exhibited opposite patterns with respect to LIS (all p<0.001). Levels of inflammatory, oxidative-stress, apoptosis, mitochondrial/DNA damage, and MAPK and Akt signaling markers exhibited patterns identical to that of LIS (all p<0.001). Anti-oxidant and anti-inflammatory protein levels increased progressively from SC to ARDS-LPS+ADMS/PreD-SCP (all p<0.0001). These findings indicate combined ADMSC/PreD-SCP was superior to either therapy alone for protecting rat lung from ARDS-sepsis injury.

Despite state-of-the art therapeutic and intensive care strategies [1, 2, 8, 10, 11], ARDS is not only a leading cause of morbidity and mortality in hospitalized patients, but also has an unacceptably poor long-term outcome, especially in severe cases [14–16]. Innovative, safe, and effective therapeutic options are needed to improve short- and long-term patient outcomes. However, a thorough understanding of underlying ARDS mechanisms is a pre-requisite for possible breakthroughs. ALI and ARDS mechanisms are likely multifactorial and include inflammation, alveolar leukocytosis, leaked proteins, reactive oxygen species (ROS) generation, and apoptosis [5, 12, 17–21].

Combination therapy is a very common strategy for treating various diseases, such as hypertension, heart failure, diabetes mellitus, and HIV/AIDS. Combination therapy allows for drug synergy that can result in reduced therapeutic doses and toxicities. We proposed that combined ADMSC and PreD-SCP therapy might have an additive effect in protecting lung structural and functional integrity against the impacts of ARDS complicated by sepsis injury. The present study investigated the therapeutic potential of early combined ADMSC and PreD-SCP treatment in a rat model of ARDS complicated by sepsis.

Results are described with respect to tissue samples collected 5 d (i.e., included 48 h ARDS induction) after the initiation of ARDS and sepsis induction in rats.

SaO2 was highest in group 1 (SC) and lowest in group 2 (ARDS-LPS). SaO2 was lower in groups 3 (ARDS-LPS + ADMSC) and 4 (ARDS-LPS + PreD-SCP) as compared to group 5 (ARDS-LPS + ADMSC + PreD-SCP), but there was no difference between groups 3 and 4 (Figure 1A). Total wet lung weight exhibited the opposite pattern compared to SaO2 among the five groups (Figure 1B), suggesting that fluid and protein in the lung parenchyma following capillary leakage lead to ARDS-sepsis damage. 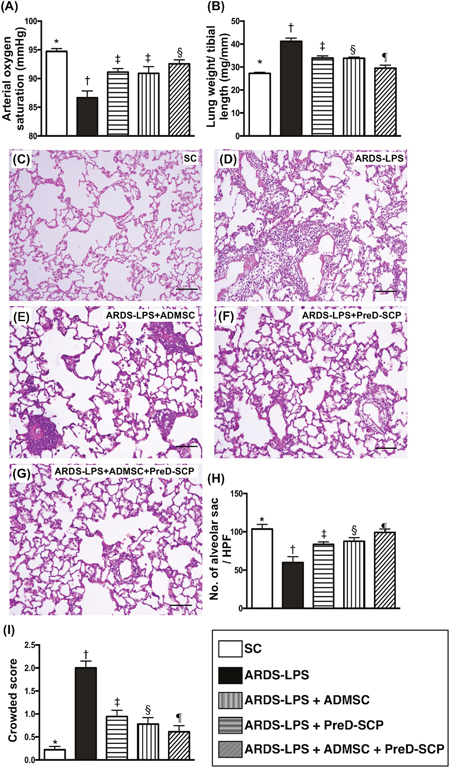 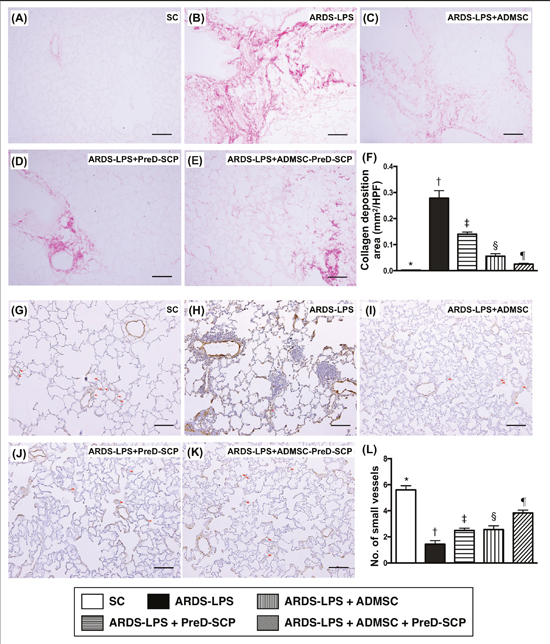 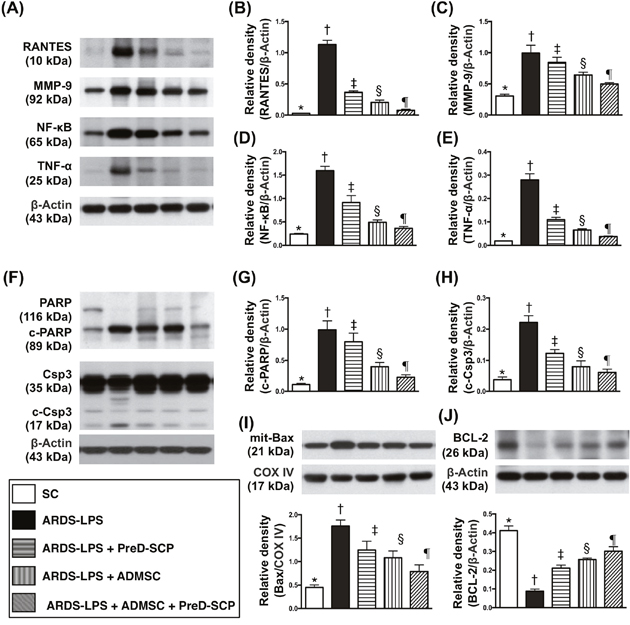 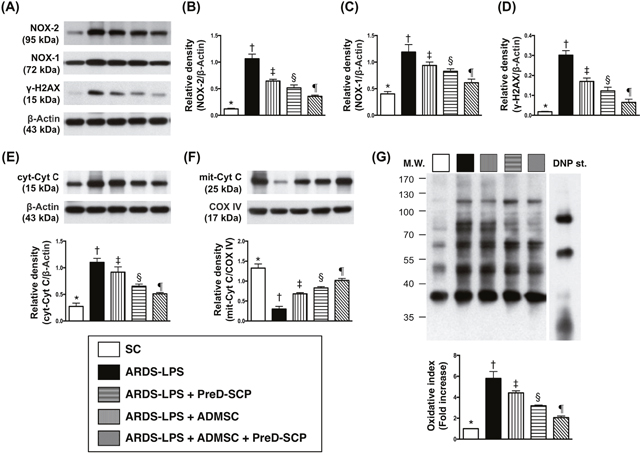 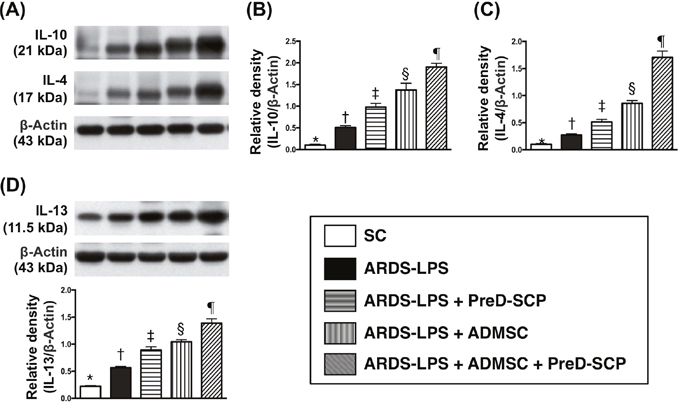 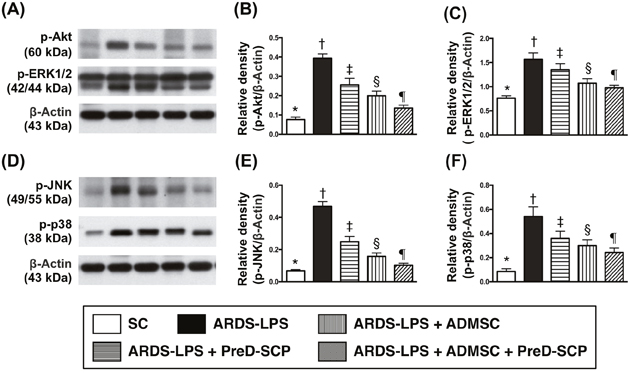 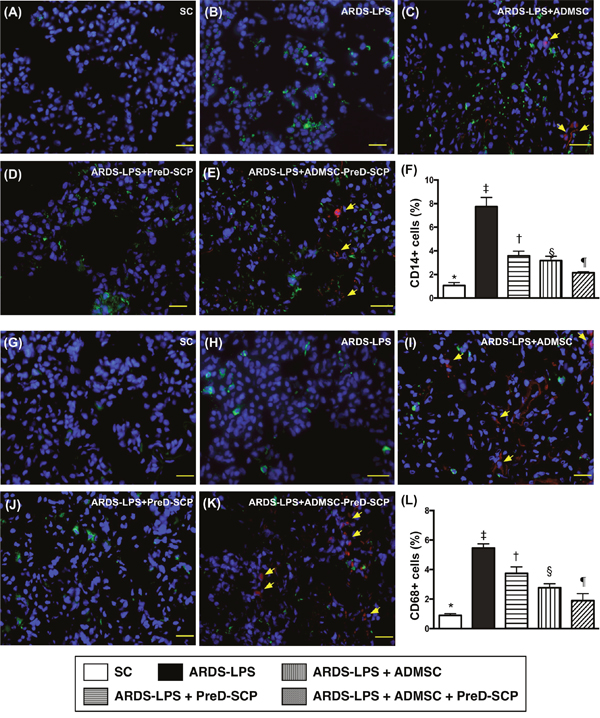 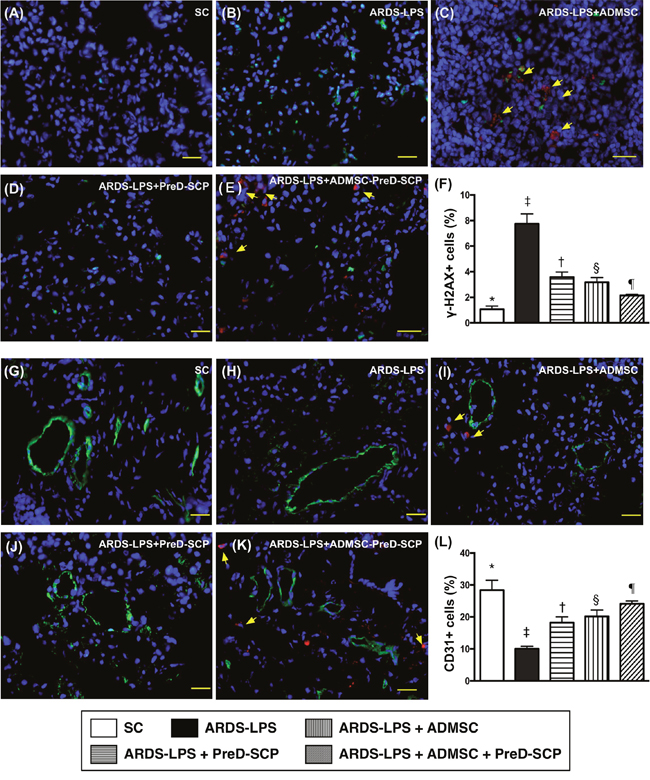 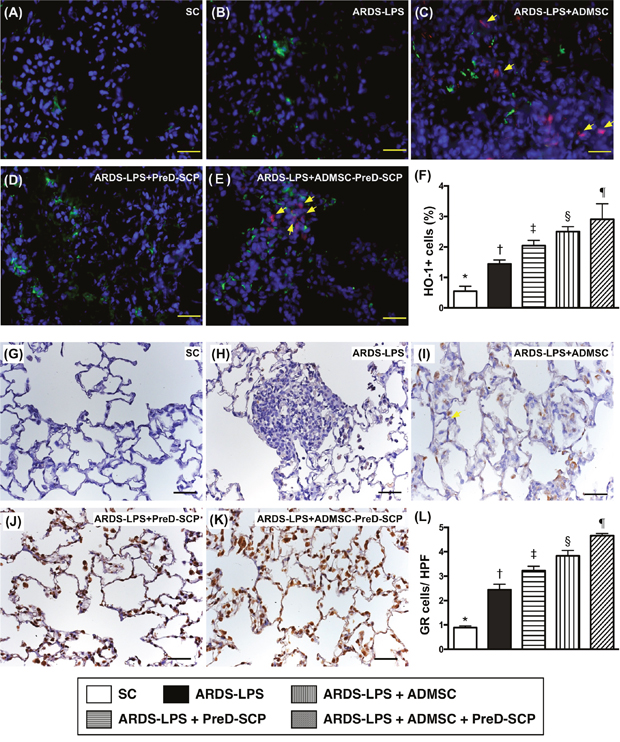 This study assessed the benefits of combined ADMSC/PreD-SCP therapy in protecting the lung against ARDS-sepsis injury. In agreement with our previous study [26], we observed lung architectural damage (as measured by lung injury score and crowding score) and impaired functionality (reduced SaO2) in rats with ARDS complicated by sepsis, which elicited a rigorous inflammatory response and oxidative stress. MAPK family and Akt signaling pathways were upregulated, which further perpetuated DNA/mitochondrial damage and cell apoptosis. These molecular-cellular perturbations were inhibited by ADMSC/PreD-SCP treatment.

Our recent study showed that PreD-SCP treatment preserved the anatomical and functional integrities of the lung in an ARDS animal model complicated by sepsis [26]. Moreover, we previously demonstrated that ADMSC therapy protected the lung from ischemia-reperfusion [20, 21] and ARDS-induced [27] injuries by reducing inflammation and oxidative stress. The present study found that ADMSC/PreD-SCP combined therapy was superior to either therapy alone for protecting the lung from ARDS complicated by sepsis. Thus, the results of our present study reinforce our previous findings [20, 21, 26, 27] and highlight a novel therapeutic regimen that may be efficacious in critical patients who are refractory to conventional therapy.

Inflammation and oxidative stress resulting from inflammatory cell recruitment and the generation of pro-inflammatory cytokines are fundamental contributors to lung injury in the setting of ARDS/sepsis syndrome [5, 12, 17–21]. We found that the inflammation indicators, NF-κB, MMP-9, RANTES, and TNF-α, along with oxidative stress and mitochondrial damage, were upregulated by ARDS with sepsis in animals. These molecular-cellular events were also identified in our recent study [26]. These findings may partly explain the observed damage to lung architecture and function, as well as enhanced apoptosis and DNA damage in animals with ARDS complicated by sepsis. Importantly, these perturbations were suppressed by ADMSC or PreD-SCP treatment, and were further suppressed by the treatments combined. Anti-inflammatory, anti-oxidant, and anti-apoptotic biomarkers were upregulated after either ADMSC or PreD-SCP treatment alone, and were further increased following combined therapy. These findings demonstrate marked suppression of inflammation and oxidative stress in animals treated with ADMSC and PreD-SCP together, and may partly explain the observed preservation of pulmonary circulation (as measured by CD31 expression and numbers of small vessels), lung architecture, and function in these animals.

The MAPK and Akt pathways direct cellular responses to a diverse range of stimuli, such as mitogens and proinflammatory cytokines. They also regulate various cell functions, including proliferation, gene expression, mitosis, cell differentiation, cell survival, apoptosis and autophagy. Our previous work showed that the MAPK family and Akt were upregulated during myocardial ischemia/infarction, associated increased inflammation with MAPK signaling activation [28], and demonstrated that MAPK signaling promoted pro-inflammatory cytokine upregulation [29]. The present study found that MAPK and Akt signaling, as well as collagen deposition in lung parenchyma, were upregulated in animals with ARDS-sepsis and were suppressed after administration of ADMSC/PreD-SCP.

This study had several limitations. First, the exact mechanisms underlying the observed preservation of both pulmonary architecture and function after ADMS-PreD-SCP treatment in the setting of ARDS complicated with sepsis are still unclear. Additionally, the types of lung cells affected by adoptive cell infusion were not investigated. The proposed mechanisms in the present rat model are summarized in Figure 10. Second, infused ADMSCs that were found to differentiate into other cell types could have been due to the length of time chosen between cell administration and lung specimen harvest (only 72 h). Third, since the study period was only 5 d, animal survival rate and the long-term impact of disease on lung injury are still uncertain. 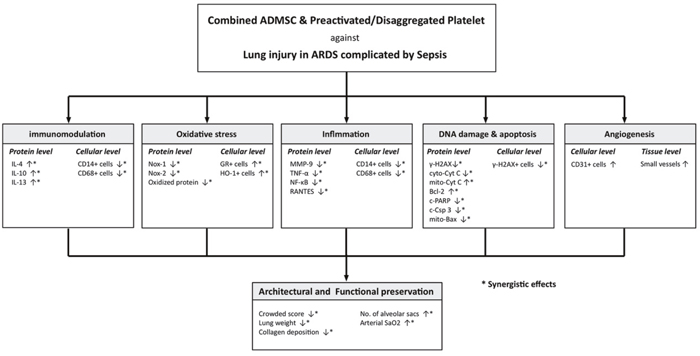 In conclusion, our results suggest that the mechanisms involved in ARDS complicated by sepsis are likely multi-faceted. Therapeutic intervention reduced inflammation, fibrosis, apoptosis, and oxidative stress, downregulated MAPK/Akt signaling, and upregulated anti-oxidant and anti-inflammatory cytokines. The present study demonstrated that combined ADMSC/PreD-SCP treatment was superior to either therapy alone in reducing ARDS-sepsis-induced acute lung injury and preserving lung function in a rat model.

By d 14, prior to ARDS-sepsis induction, adipose tissue was isolated, as described previously, from groups 3 and 5 animals for culturing ADMSCs [30–32]. Briefly, adipose tissue surrounding the epididymis was carefully dissected, excised and prepared. 200–300 μL of sterile saline was added for every 0.5 g of adipose tissue to prevent dehydration. The tissue was cut into <1 mm3-sized pieces using sharp, sterile surgical scissors. Sterile saline (37°C) was added to homogenized adipose tissue at a ratio of 3:1 (saline: adipose tissue), followed by stock collagenase solution to a final concentration of 0.5 units/mL. An aliquot of cell suspension was then removed for cell culture in Dulbecco’s modified Eagle's medium (DMEM)-low glucose medium containing 10% FBS for 14 d. Approximately 2.0–3.0x106 ADMSCs were obtained from each rat.

An animal model of ARDS complicated by sepsis

An ARDS experimental model was created when pure oxygen (100% O2) was continuously administered to rats (from groups 2 to 5) for 48 h [27]. Additionally, to mimic the clinical setting of ARDS complicated by sepsis, LPS (1.5 mg/kg i.p. for each rat) was administered to groups 2 and 5, 24 h after ARDS induction. LPS was administered to animals for sepsis induction as previously described, with minimal modification [26, 33].

To investigate the therapeutic effect of ADMSC-Pre-SCP treatment on arterial oxygen saturation (SaO2), arterial blood was sampled from the carotid artery for blood gas analysis. Following arterial blood sampling, rats were euthanized and lungs harvested. Lung specimens were prepared for morphometric analyses as previously described [27, 33, 34]. Briefly, the left lung was inflated at a constant airway pressure of 15–20 mmHg and fixed with OCT (Tissue-Tek, Sakura, Netherlands) for immunohistochemical (IHC) staining. The right lung was cut into pieces that were either fixed in 4% paraformaldehyde/0.1% glutaradehyde PBS solution before being embedded in paraffin blocks for hematoxylin and eosin (H&E) staining, or stored at -80°C for protein and mRNA analyses.

Lung injury score assessments were performed as described previously [27, 33, 34]. Lung specimens were sectioned at 5 μm for light microscopy. H&E staining was performed to estimate the number of alveolar sacs in a blinded fashion. Three lung sections from each rat were analyzed; three randomly selected high-power fields (HPFs; 100x) were examined in each section, and the mean number was determined. The extent of crowded area, which was defined as regions of thickened septa in lung parenchyma associated with partial or complete collapse of alveoli on H&E-stained sections, was also assessed in a blinded fashion. The following scoring system [19, 24, 30] was adopted: 0, no detectable crowded area in a given HPF; 1, <15% crowded area; 2, 15–25%; 3, 25–50%; 4, 50–75%; 5, >75%.

To analyze collagen deposition, three lung paraffin sections (4 μm) were stained with picro-Sirius red (1% Sirius red in saturated picric acid solution) for 1 h at room temperature using standard methods. Sections were then washed twice with 0.5% acetic acid. The water was physically removed from the slides by vigorous shaking. After dehydration in 100% ethanol three times, sections were cleaned with xylene and mounted in a resinous medium. Ten low power fields (10x) were used to identify Sirius red-positive areas on each section. Image-pro plus 6.1 software (Media Cybernetics, Bethesda, MD, USA) was used to calculate the total cross-sectional area of the lung and the total Sirius red-positive staining area.

Oxidative stress-related protein analysis protocols were described previously [27, 31, 34]. The Oxyblot Oxidized Protein Detection Kit was purchased from Chemicon. DNPH derivatization was carried out with 6 μg of protein for 15 min according to the manufacturer’s instructions. One-dimensional electrophoresis was carried out on a 12% SDS/polyacrylamide gel after DNPH derivatization. The protein standard, containing 1-3 dinitrophenylhydrazone (DNP) residues, was loaded on each gel to serve as an internal control for each steps of the Oxyblot. Proteins were transferred to nitrocellulose membranes, which were then incubated with primary antibody (anti-DNP 1: 150) for 2 h, followed by secondary antibody (1:300) for 1 h at room temperature. The washing procedure was repeated eight times within 40 min. Immunoreactive bands were visualized by enhanced chemiluminescence (Amersham Biosciences) and exposed to Biomax L film (Kodak). For quantification, ECL signals were digitized using Labwork software (UVP).

This study was supported by a program grant from Chang Gung Memorial Hospital, Chang Gung University (No. CMRPG8C0871 and CMRPG8C0872).