MicroRNAs with prognostic significance in osteosarcoma: a systemic review and meta-analysis

Introduction: This study aimed to elucidate the prognostic value of microRNAs (miRNAs) in patients with osteosarcoma.

Results: A total of 55 articles that investigated the correlation between miRNA expression and either patient survival or disease recurrence in osteosarcoma was initially identified. Among these, 30 studies were included in the meta-analysis. The results of our meta-analysis revealed that elevated levels of miR-21, miR-214, miR-29, miR-9 and miR-148a were associated with poor prognosis in osteosarcoma. Additionally, downregulated miR-382, miR26a, miR-126, miR-195 and miR-124 expression indicated poor prognosis in osteosarcoma.

Conclusions: miRNAs may act as independent prognostic factors in patients with osteosarcoma and are useful in stratifying risk.

Osteosarcoma is the most common bone malignancy with an incidence of 4–5 cases per million people [1]. It usually develops in the proximal humerus, proximal tibia, and metaphyseal regions of the distal femur. The probability of osteosarcoma occurrence is two times higher in boys than in girls. With the development of multidisciplinary treatments, the five-year survival rate has significantly improved to approximately 60–70% in patients with localized tumor. However, it is difficult diagnose osteosarcoma during the early disease stages, and approximately half of all patients develop metastases. These patients with metastasis or recurrence have a low 5-year survival rate [2]. Therefore, new biomarkers are essential to properly assess the prognosis of osteosarcoma. The biomarkers with most potential as prognostic factors are the microRNAs (miRNAs).

miRNAs are a class of endogenously expressed small non-coding RNAs 18–25 nucleotides in length. They negatively regulate gene expression by base pairing to the 3’ untranslated region of target mRNAs. These molecules are involved in almost all biological processes. Accumulating evidence suggests that miRNAs can function as tumor suppressors or oncogenes by targeting genes involved in tumor cell differentiation, proliferation, apoptosis and metastasis. Recently, many studies have shown that numerous miRNAs are either overexpressed or underexpressed in osteosarcoma [1] and are often associated with the entire process of tumor development [3]. The relationship between miRNA expression and the prognosis of patients with osteosarcoma has been more and more reported [3–5]. In this study, we performed a systematic review and meta-analysis, to better understand the prognostic value of miRNAs in osteosarcoma. Using a systemic review and meta-analysis, this study comprehensively evaluated the prognostic value of miRNA expression in osteosarcoma.

A total of 1,212 references were initially retrieved using the search strategy. After screening the titles and abstracts, 63 references reported on the correlation between miRNA expression and either patient survival or disease recurrence in osteosarcoma. Among these, 35 studies reported at least one unique miRNA, so a pooled analysis would not be possible [6–40]. Finally, 24 articles encompassing 30 studies were include in the meta-analysis [3–5, 41–61] (Figure 1). The characteristics of the articles are shown in Table 1. 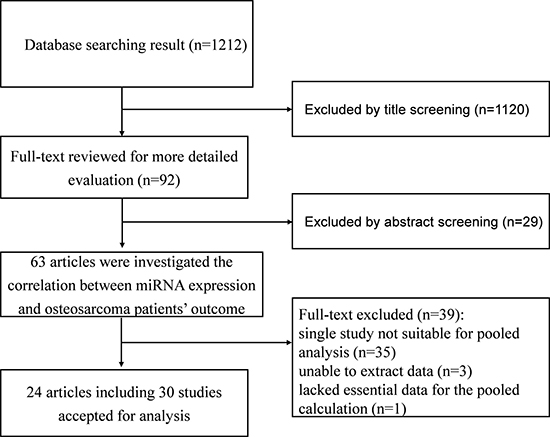 Table 1: The main characteristics of all studies in the meta-analysis 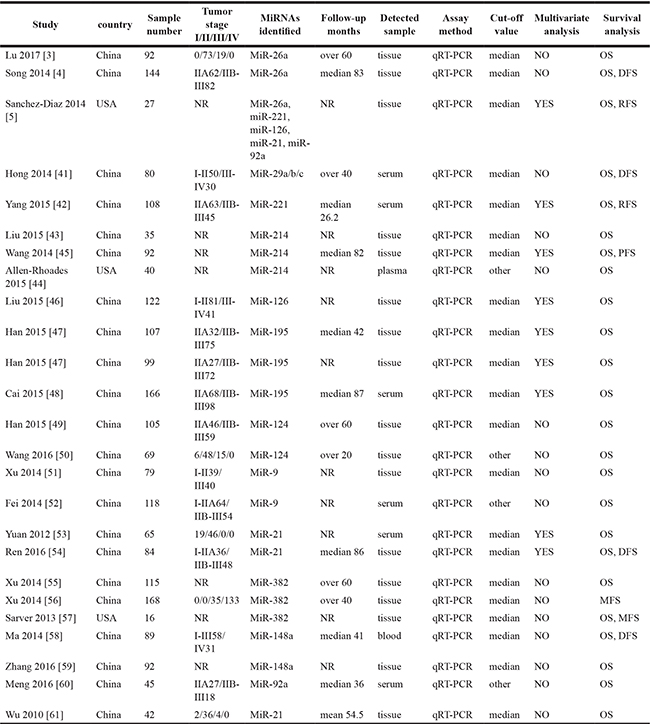 Every eligible study enrolled in our meta-analysis was evaluated by the Newcastle-Ottawa Quality Assessment Scale (NOS). The NOS scores of every study range from 4 to 8, with an average of 6.54. The detailed information of NOS scores is shown in Table 2.

There were 4 studies assessing miR-21 as a predictor of survival in osteosarcoma using multivariate analysis, among which 3 used tumor tissues (n = 153) [5, 54, 61] and 1 used serum samples (n = 65) [53] (Table 3). Once pooled, studies with different baselines showed obvious statistical heterogeneity. Hence, we pooled the HRs using a random-effects model. The results showed that upregulated miR-21 was associated with worse overall survival (OS) in osteosarcoma (HR=2.60, 95% CI 1.39–4.89, P = 0.003) (Figure 2). Considering the inter-study heterogeneity, we excluded the serum miR-21 study and pooled the remaining tissue-based miR-21 studies. The results showed that elevated levels of miR-21 in tissue was associated with worse OS in patients with osteosarcoma (HR=2.88, 95% CI 1.12–7.38, P = 0.028). There was only one study that evaluated the correlation between miR-21 expression and disease-specific survival (DFS) in osteosarcoma, which reported that high levels of miR-21 were associated with poor DFS in osteosarcoma. Therefore, miR-21 may act as a marker of poor prognosis in patients with osteosarcoma.

Table 3: Summary of hazard ratios of miRNA expression in osteosarcoma 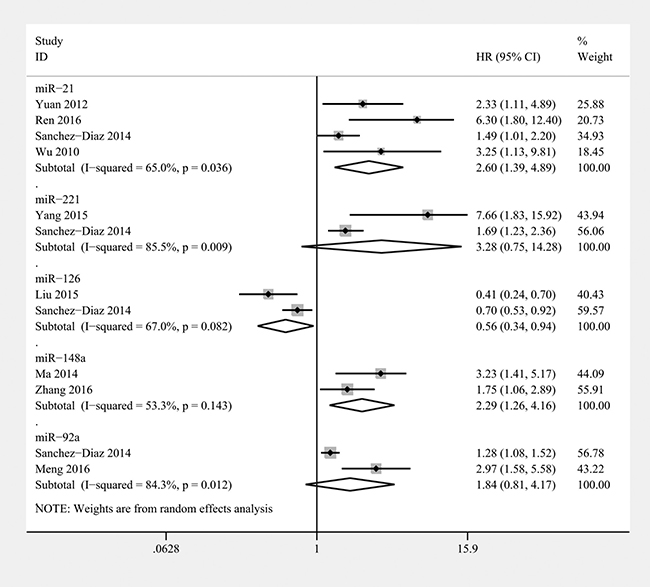 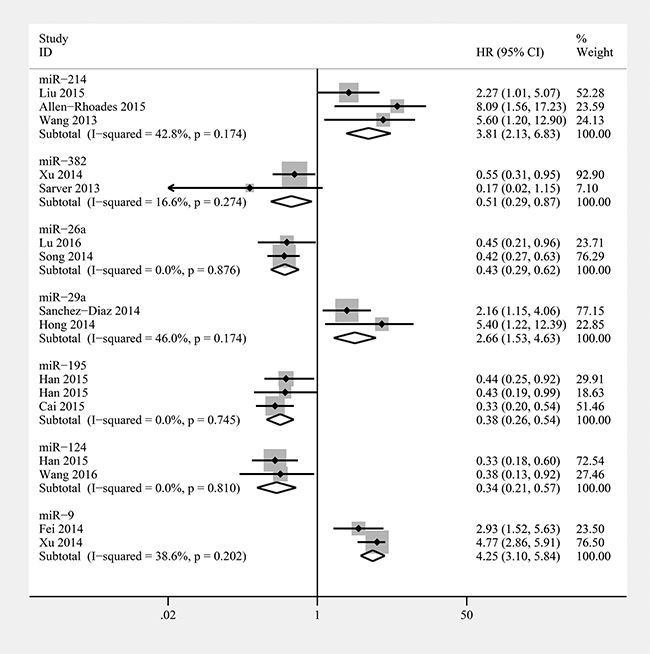 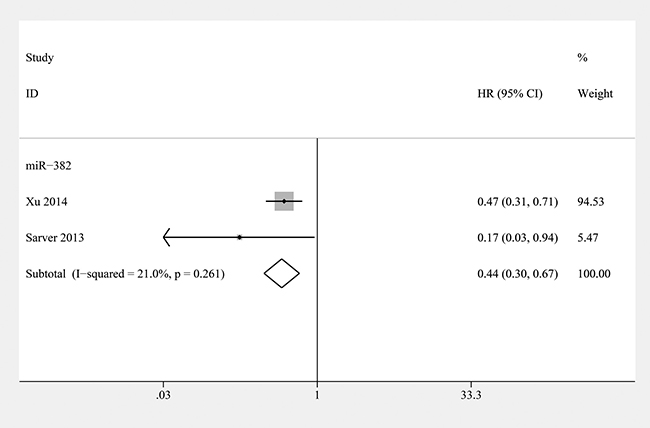 Figure 4: Forest plot of the relationship between overexpression miR-382 and metastasis-free survival (MFS) in osteosarcoma patients with fixed-effects model.

Two studies described low levels of miR-26a in tumor tissue as a predictive biomarker for worse OS in osteosarcoma based on univariate analyses (n = 236) [3, 4] (Table 3). The combined HR showed that elevated levels of tissue-based miR-26a were significantly associated with a better OS outcome in osteosarcoma (HR: 0.43; 95% CI 0.29–0.62, P < 0.001) (Figure 3). Moreover, Song et al. reported that low miR-26a expression was associated with worse clinicopathological characteristics and DFS in osteosarcoma. Therefore, miR-26a may act as a tumor suppressor in osteosarcoma. 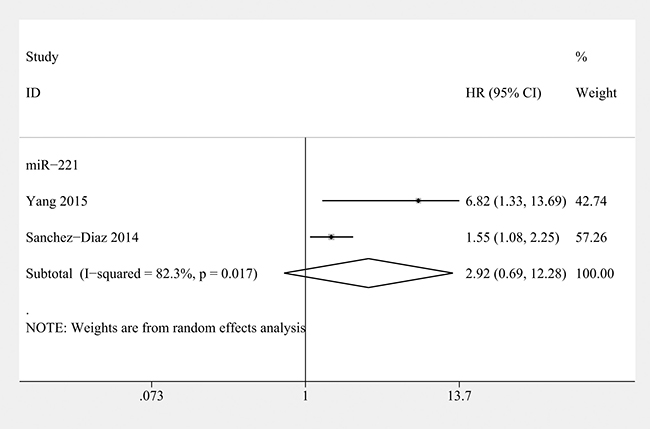 Figure 5: Forest plot of the relationship between overexpression miR-221 and recurrence-free survival (RFS) in osteosarcoma patients with random-effects model.

Various chemotherapy regimens have significantly improved the survival of patients with osteosarcoma. However, patients receiving similar therapy usually presented outcomes, suggesting an urgent demand for reliable prognostic biomarkers. With the development of high-throughput array profiling, it is possible to obtain a more accurate prediction of patient prognosis in osteosarcoma based on the miRNA profile. In our study, our aim was to identify miRNAs that were correlate with the survival of patients with osteosarcoma, which could be used to inform treatment decisions and evaluate patient prognosis.

However, our study still has some limitations. First, some of the pooled analyses for miR-21, miR-221, miR-126, and miR-148a contained studies with significant statistical heterogeneity. Second, some HRs were extracted from the reported survival curves, which will inevitably lead to small statistical errors. Third, most of the articles included in this meta-analysis were from China. Consequently, the samples used in this study were imbalance. Finally, the cutoff value used in each study was different such that a clear threshold could not be established.

In conclusion, our pooled analysis revealed that high levels of miR-21, miR-214, miR-29, miR-9 and miR-148a were associated with poor prognosis in osteosarcoma, whereas reduced miR-382, miR26a, miR-126, miR-195 and miR-124 expression showed similar results. Further prospective multicentre that are adequately designed with a larger sample size are needed to confirm the prognostic value of this panel of miRNAs in osteosarcoma and to explore more effective therapeutic stategies. In addition, further comparative analysis among the different miRNAs should be made, to identify which find which miRNA would be the most effective marker to improving patient prognosis.

This systemic review and meta-analysis was performed following the Observational Studies in Epidemiology (MOOSE) guidelines [78].

Literature searches were conducted using the PubMed, Embase, the Cochrane Library, China National Knowledge Infrastructure, and Wanfang data-bases (final search conducted January 1, 2017). The keywords combinations in the search strategy were “microRNA OR microRNAs OR miR OR miRNA” (all fields) AND “osteosarcomas OR osteosarcoma OR osteogenic sarcoma” (all fields) AND “prognosis OR prognostic OR survival” (all fields). Searches were limited to the English language publications.

Eligible studies included in the systemic review and meta-analysis met the following criteria: (1) focused on patients with osteosarcoma; (2) assayed type either blood or tissue samples; (3) investigated the miRNA prognostic value, (4) clearly defined the cut-off, (5) clearly described the miRNA measurement method (Table 4). Studies were excluded if the met one of the following criteria (1) single study focused on a miRNA not investigated by another study, (2) unable to extract the data, (3) a lack of essential data for the pooled calculation.

Table 4: Criteria for the inclusion of prognostic miRNA studies

The database search was independently reviewed by two authors (D. Cheng and X. Qiu). The essential information was independently by two investigators. If the statistical variables were not described in the study, we calculated from the available numerical data in the articles using the methods described by Tierney [79]. The quality of included studies was assessed by NOS according to the following categories: selection (description of the derivation of the cohort, description of the derivation of the non-exposed cohort, description of exposure ascertainment, description of whether outcome of interest was not present at the start of study), comparability (study controlled the most important factor, study controlled other additional factors), and outcome of interest (description of outcome assessment, adequacy of follow-up of cohorts, follow-up long enough for outcomes to occur) [80]. A total of nine items were extracted and each item scored 1. The total score of NOS ranged from 0 to 9, and we considered studies as high quality if they met at least six scores.

An observed HR < 1 suggested a more favourable prognosis in patients with miRNA overexpression, and an HR > 1 indicated a worse prognosis. HRs and their 95% CIs were combined to measure the effective value of miRNA expression on prognosis. If the statistical data were described in the study, we extracted them directly. Otherwise, they were calculated from available numerical data in the articles according to the methods described by Tierney [79]. The data from Kaplan-Meier survival curves were read by Engauge Digitizer version 4.1, and three independent researchers read the curves to reduce reading variability. We also sent e-mail to the corresponding authors of eligible articles requesting additional information and original data needed for the meta-analysis. Statistical heterogeneity was assessed by calculating the I2 statistic, and assessing the P value [81, 82]. An I2 value exceeding 50% and/or the P value less than 0.05 indicated the presence of heterogeneity, and a random-effects model was used. Otherwise, the fixed-effects model was used. Publication bias was estimated using Begg’s and Egger’s tests. All analyses were performed using STATA vision 12.0 (Stata Corporation, College Station, TX, USA). A P value less than 0.05 was considered statistically significant except where otherwise specified.