HE is a common complication of severe liver disease, which is grouped into three categories: type A is associated with acute liver failure (ALF), type B is associated with portal-systemic bypass without liver disease, and type C is HE that occurs in cirrhotic patients. Studies on thyroid hormones in patients with type C HE had been reported. T3 and T4 levels were lower in cirrhotic patients with type C HE compared with cirrhosis patients without HE [5, 6]. However, there is no report on alteration of thyroid hormones in patients with type A HE. The pathogenesis and manifestation of type A and type C HE are different [7, 8]. It is not clear whether type A HE has any effect on thyroid function. Type A HE is a life-threatening critical illness with high mortality. To explore alteration of thyroid hormones in type A HE patients will widened our knowledge of type A HE and help to find the clue of new therapy.

The present study was aimed to determine whether there is any abnormality in thyroid hormones among patients with type A HE compared to patients with acute liver injury (ALI) without encephalopathy. 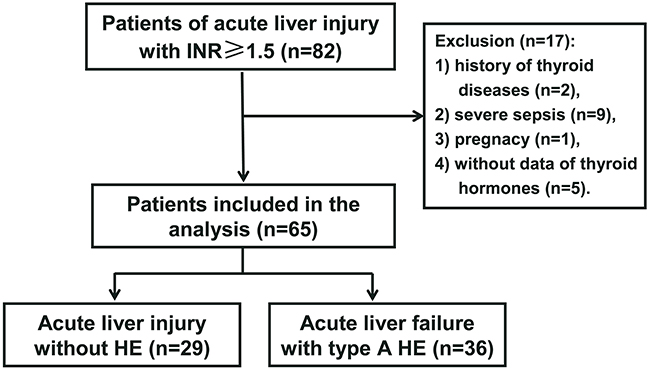 Figure 1: Flow chart for patients enrollment and evaluation. HE: hepatic encephalopathy. There were 82 patients of ALI with INR≥1.5 hospitalized during the study period, and among them 65 patients were involved in the study, including 36 ALF patients with type A HE and 29 patients without HE

Alteration of thyroid hormones in patients with type A HE 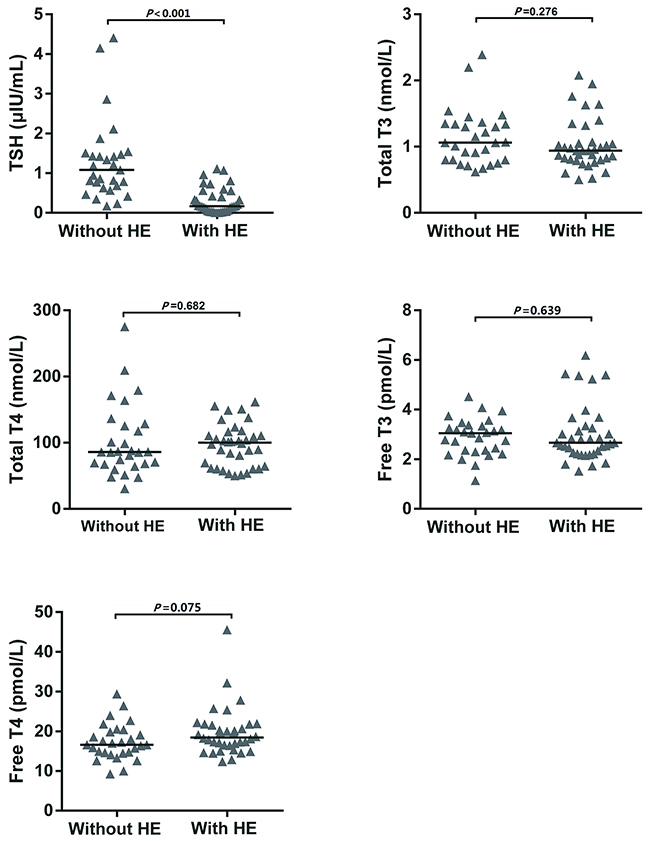 Table 2: Levels of thyroid hormones in patients with and without HE

Variables are expressed as Median (IQR).

OR, odds ratio; CI, confidence interval. Multivariate analysis identified that HE was the independent risk factor associated with the occurrence of low TSH level. 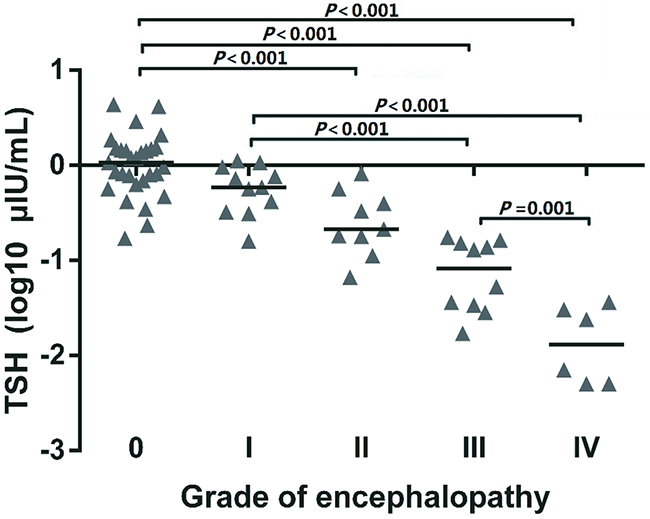 Table 4: Evaluation of correlation between TSH level and clinical variables.

Partial correlation analysis showed that there was an inverse correlation between TSH level and the grade of encephalopathy. 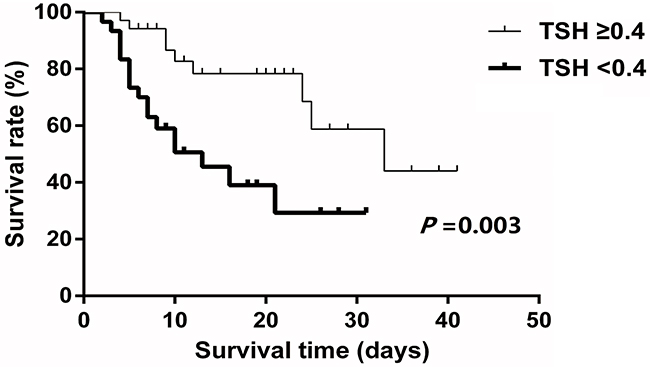 Figure 4: Survival rate between patients with and without low TSH. Patients with low TSH had worse transplant-free survival compared to patients with normal TSH level (P=0.003).

The abnormality of thyroid hormones in patients with liver diseases was often reported. The ‘‘sick euthyroid’’ usually manifested as primary hypothyroidism, and the abnormalities were often presented as decreased levels of T3 and T4, and the TSH level is usually normal or slightly increased [9]. The ‘‘sick euthyroid’’ was associated with the severity of liver diseases and mortality of patients [4]. However, studies about the alteration of thyroid hormones in patients with HE were few.

The underlying mechanism of the different alteration of thyroid hormones between type A and type C HE might be related to difference in pathogenesis. Type A HE is characterized by astrocyte swelling often leading to cerebral edema and its complications (intracranial hypertension, brain herniation) [9, 10]. The occurrence of cerebral edema and intracranial hypertension is related to severity of encephalopathy. Cerebral edema is seldom observed in patients with grade I-II encephalopathy, but increases to 25% to 35% with progression to grade III, and 65% to 75% or more in patients with grade IV encephalopathy [11]. However, type C HE is characterized by so-called Alzheimer type II change in the astrocytes and the occurrence of cerebral edema is seldom [12]. In the present study, logistic regression analysis revealed that type A HE was an independent related factor for the occurrence of low TSH. Correlation analysis also showed that there was a negative correlation between TSH level and the grade of encephalopathy. Therefore, the decrease of TSH level might be related with the impact of cerebral edema on functions of hypothalamus and pituitary caused by type A HE that resulted in subclinical central hypothyroidism.

It was also noticed that patients with low TSH had a significantly increased mortality rate compared to patients with normal TSH level. This could be due to the severity of encephalopathy and liver impairment in patients with reduced TSH level. It is not known whether restoration of the reduced thyroid levels could contribute to the recovery of patients. Hypothyroidism could minimize acute liver injury and chronic liver fibrosis due to hypometabolism [13–15]. However, it may affect for hepatocyte regeneration which is important for the recovery of patients with ALF [16–17]. It remains elusive whether TSH level will return to normal when type A HE resolved. No matter the decreased TSH levels in patients with type A HE is an adaptive response or a causative risk, it is a useful non-invasive marker for the severity of the disease and a poor prognosis indicator.

This is the first study to explore the abnormality of thyroid hormones in type A HE patients, and there are some limitations. The major weakness of our study is a retrospective observational research. Although we investigate the factors associated with the abnormality of thyroid hormones, literature survey and mechanistical investigation are not adequate. The present conclusions obtained by the retrospective method need to be further evaluated by prospective studies.

In conclusion, the results of the present study demonstrated that ALF patients with type A HE have significantly reduced TSH. A negative correlation was also observed between the reduced TSH level and the grade of HE. Furthermore, the decreased TSH was associated with mortality of patients.

The study was approved by the Committee of Ethics in Tianjin second people’s Hospital and followed the principles expressed in the Declaration of Helsinki (revised 2013).

The diagnosis of ALF and type A HE

ALF was defined as acute liver function impairment with INR ≥1.5 and any degree of encephalopathy in a patient without pre-existing cirrhosis and with an illness of <26 weeks’ duration [11]. The diagnosis of HE was consistent with the definition established by the Working Party for Hepatic Encephalopathy in 1998 [7]. Encephalopathy was graded based on the West-Haven Criteria as follows: grade I characterized by confusion and mood changes, grade II-patient was drowsy or shows inappropriate behavior or has presence of asterixis, grade III-patient was sleepy but arousable, grade IV-patient was unresponsive to deep pain [19, 20].

All the data regarding treatment and outcome of patients during hospital stay were collected. Patients were provided with general management, such as metabolic support, maintaining adequate hemodynamics, correction of coagulopathy, and surveillance for infection. Etiology management included nucleos(t)ide analogues for viral hepatitis B, corticosteroid treatment for suspected autoimmune hepatitis, and discontinue of medications that produce drug-induced hepatotoxicity. In patients with HE, oral lactulose and intravenous L-ornithine L-aspartate were given for treatment of hyperammonemia, and mannitol and glycerin fructose were used if cerebral edema and intracranial hypertension occurred. Patients received prognostic evaluation repeatedly to identify candidates for liver transplantation. Data of adverse events and time of death were collected.

Normally distributed continuous variables were reported as Mean ± SD and were compared by Student’s t test. Non-normally distributed continuous data were reported as median with interquartile ranges (IQR) and were compared by Mann-Whitney U test. Categorical variables were reported as percentage and were compared by Chi-Square test or Fisher’s exact test. Logistic regression analysis was employed to identify factors associated with low TSH level. Correlation coefficient was calculated using Spearman’s rank order, and partial correlation analysis was performed to evaluate the adjusted association between TSH level and the grade of encephalopathy. Survival analysis was conducted using the Kaplan–Meier method, and the log-rank test was used to compare survival curves. A two-tailed P value < 0.05 was considered as statistically significant. SPSS 20.0 software (SPSS, Inc., Chicago, IL) was used for all statistical analyses.

The authors are thankful to the staff of ICU Department of Tianjin City Second People’s Hospital.

The authors have nothing to disclose regarding conflicts of interest in connection with the present manuscript.

The study was funded in part by Chinese national “12th 5-year” project for preventing and treating major disease by Chinese traditional medicine (Grant No: 2012ZX10005).