Surrogate endpoint for overall survival in assessment of adjuvant therapies after curative treatment for hepatocellular carcinoma: a re-analysis of meta-analyses of individual patients’ data

The gold standard endpoint to evaluate the effect of treatment for hepatocellular carcinoma (HCC) is overall survival (OS), but it requires a longer follow-up period to observe. This study aimed to identify whether disease-free survival (DFS) could be used as a surrogate endpoint for OS to assess the efficacy of adjuvant therapies after curative treatment (surgical resection and ablation) for HCC patients. A systematic review was conducted to identify trials about curative treatment combined with or without adjuvant therapies (interferon, IFN; or transarterial chemoembolization, TACE) for HCC. Total of 2211 patients’ data from 17 trials were analyzed. At the individual study level, DFS was strongly correlated to OS (ρ = 0.988 and 0.930, 95% CI: 0.965–0.996 and 0.806–0.976 for the studies comparing Radiofrequency ablation (RFA) + TACE to RFA alone; and for the studies comparing curative treatment + IFN to curative treatment alone, respectively). At the trial level, the effects of treatment on DFS and OS were also strongly correlated to each other (R = 0.815 and 0.854, 95% CI: 0.536–0.934 and 0.621–0.948, respectively). In conclusion, DFS could be used as a potential surrogate endpoint for OS to assess the effect of adjuvant therapies after curative treatment for HCC.

Liver cancer is the second most common cause of cancer-related death, with 782,500 new cases and 745,500 cancer deaths occurred in 2012 worldwide [1]. As the major histological subtype, hepatocellular carcinoma (HCC) occupies 70% to 85% of patients with liver cancers [2]. During the past decades and with advances in diagnosis and treatment, the median survival reaches beyond 5 years [3]. With further exploration of treatment for HCC, overall survival (OS) as a standard endpoint to evaluate the efficacy of treatment is complicated, because it requires a large number of patients and longer follow-up period. It is necessary and meaningful to explore a reliable surrogate endpoint for OS to allow early assessment of treatment for HCC

Treatment of HCC has changed greatly within the past decades and become a major research area [3]. For the treatment of HCC, surgical resection, liver transplantation and local ablative therapy are considered to be the curative treatment [4]. Surgical resection is preferred choice for HCC without cirrhosis [3]. HCC patients with normal concentration of bilirubin and no portal hypertension, the probability that survival time reaches 5 years is 70% after surgical resection [5]. Radiofrequency ablation (RFA) is commonly recommended as a first line local ablative therapy for tumors less than 5cm [3]. After RFA, survival in Child-Pugh A patients was 50–75% at 5 years [6, 7]. In addition, transarterial chemoembolization (TACE) and interferon (IFN) as the non-curative treatments have been confirmed to improve survival [8, 9]. TACE induces objective responses in 35% patients and improves 2-year survival [8, 10]. It has been confirmed that IFN decreased the rates of tumor recurrence and mortality for hepatitis B virus (HBV) or/and hepatitis C virus (HCV) related HCC [9, 11]. Pre- and post-operative antiviral and anti-inflammatory treatment with IFN has been shown to reduce early and late tumor recurrence rates in HCC patients with HBV or/and HCV infection [11, 12]. In order to find out more effective treatment to improve survival, the combined utilization of adjuvant therapy after curative treatment has attracted increasing attention. Meanwhile, it requires strict evaluation criteria to study the effect of adjuvant therapies.

Overall survival as the gold standard endpoint being used to assess the effect of HCC treatment is reliable. However, it requires a large number of patients and longer follow-up period to estimate significant differences between groups of patients [13]. Utilization of a surrogate endpoint at an early stage in clinical trials could speed up assessment of efficacy and reduce costs. It was defined that OS is the time from randomization to death from any cause, and disease-free survival (DFS) was the time from randomization to the first event (loco-regional, distant recurrence, or death from any cause) after treatment [14]. Recent studies had confirmed that DFS is a valid surrogate endpoint for OS in the clinical trials for the treatment of colon cancer, gastric cancer, and lung cancer [14–16]. However, there is still no available surrogate endpoint for OS to assess the efficacy of adjuvant therapies in HCC study. The purpose of our study was to evaluate whether DFS could be used as an early surrogate endpoint in studies involving adjuvant therapies after curative treatment for HCC patients.

Table 1: The eligible eight meta-analyses included in this study 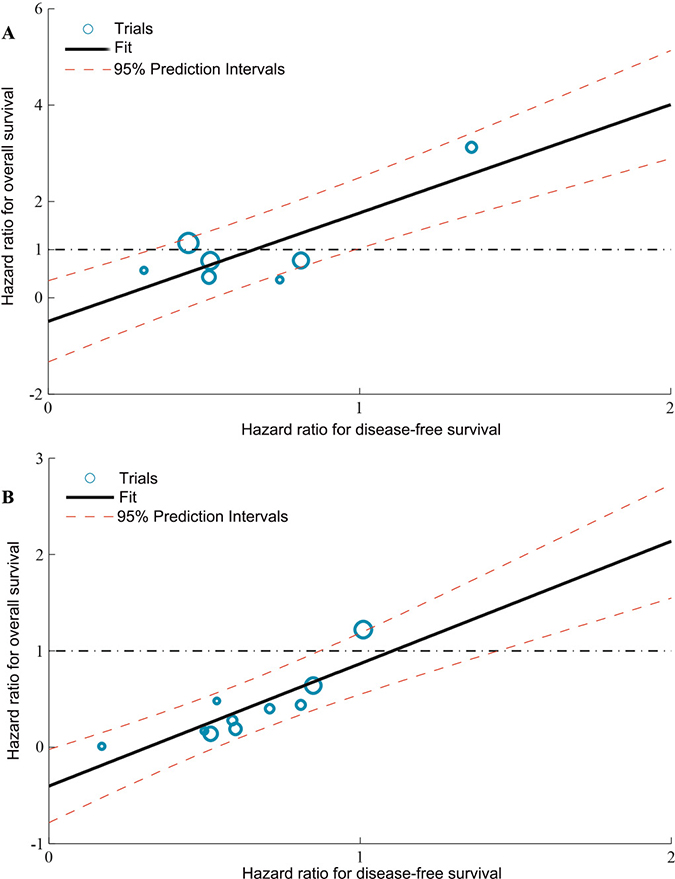 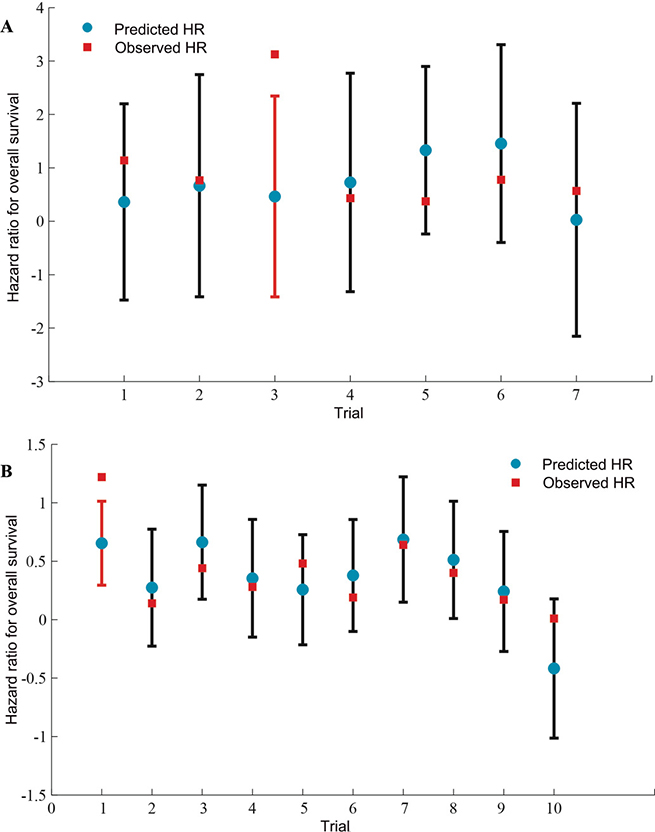 Fast progress and improvement in treatment has prolonged survival of patients with HCC. However, the best treatment for patients with different stages of HCC remains to be explored. There is no doubt that the best endpoint to be used in these studies is OS, but it requires a longer follow-up period. It has been reported that the time to progression (TTP), closely related to DFS, could be used as a surrogate endpoint for OS in the clinical trials of advanced HCC [42]. In present study, our results showed that the effects of treatment on DFS and OS were strongly correlated in the HCC patients treated with curative treatment (surgical resection and ablation) combined with or without TACE and IFN. Both the correlation coefficient R (trial-level) and the rank-correlation coefficient ρ (individual-level) are close to 1 between DFS and OS in these patients, thus DFS is a validated surrogate endpoint for OS statistically [43]. These findings suggest that DFS could be used as a surrogate endpoint for OS to reduce the duration and cost in the future clinical studies.

As a reasonable candidate for a surrogate of OS, DFS has been confirmed that it is a surrogate for OS in many tumor types [14–16]. Moreover, it has been reported that DFS was the preferred potential surrogate endpoint for small HCC according to a questionnaires survey among clinicians and methodologists [44]. Our study confirmed that DFS could be used as a surrogate endpoint for OS to accelerate assessment of efficacy for adjuvant therapy after curative treatment in HCC. These results were based on a re-analysis of meta-analyses of individual patients’ data.

There are a few limitations to our analysis because it was based on the data extracted from literature, rather than based on the data of each patient directly. Our study included 17 trials from 8 meta-analyses, and the data extracted from Kaplan-Meier survival curves was used to calculate HRs according to a reliable method. Furthermore, with increasing clinical trials of adjuvant therapies for HCC, more work remains to be done to analyze the surrogacy of DFS for OS in upcoming study.

In conclusion, our results suggested that DFS could be used as a surrogate endpoint for OS to allow early assessment of efficacy of adjuvant therapies after curative treatment for HCC patients in future clinical trials.

On the basis of the linear model at the second stage of the two-stage approach, we calculated the surrogate threshold effect (STE), which was defined as the minimum treatment effect on the surrogate (DFS) necessary to predict a non-zero effect on the true endpoint (OS), i.e. the HR was not equal to 1. A future trial requires an upper limit of a confidence interval for the estimated treatment effect (HR) of the surrogate to fall below the STE to predict a non-zero effect on OS, as described previously [47].

For each meta-analysis, we used a leave-one-out cross-validation approach to assess the prediction accuracy of the surrogate model. Each study was left out once and the linear model was rebuilt with the other studies. This model was then applied to the left-out study and a 95% prediction interval was calculated to compare the predicted and the observed treatment effect on OS.

Authors who have taken part in this study declared that they do not have anything to disclose regarding funding or conflict of interest with respect to this manuscript.

This work was supported by the grant of Key Laboratory of Tumor Immunology and Pathology of Ministry of Education (NO.2012jsz108) and National Natural Science Foundation of China (No. 81272224).