The risk factors and potential practice implications of radiation-induced pleural effusion (RIPE) are undefined. This study examined lung cancer patients treated with thoracic radiation therapy (TRT) having follow-up computed tomography (CT) or 18F-fluorodeoxyglucose (FDG) positron emission tomography (PET)/CT. Increased volumes of pleural effusion after TRT without evidence of tumor progression was considered RIPE. Parameters of lung dose-volume histogram including percent volumes irradiated with 5-55 Gy (V5-V55) and mean lung dose (MLD) were analyzed by receiver operating characteristic analysis. Clinical and treatment-related risk factors were detected by univariate and multivariate analyses. 175 out of 806 patients receiving TRT with post-treatment imaging were included. 51 patients (24.9%) developed RIPE; 40 had symptomatic RIPE including chest pain (47.1%), cough (23.5%) and dyspnea (35.3%). Female (OR = 0.380, 95% CI: 0.156–0.926, p = 0.033) and Caucasian race (OR = 3.519, 95% CI: 1.327–9.336, p = 0.011) were significantly associated with lower risk of RIPE. Stage and concurrent chemotherapy had borderline significance (OR = 1.665, p = 0.069 and OR = 2.580, p = 0.080, respectively) for RIPE. Patients with RIPE had significantly higher whole lung V5-V40, V50 and MLD. V5 remained as a significant predictive factor for RIPE and symptomatic RIPE (p = 0.007 and 0.022) after adjusting for race, gender and histology. To include, the incidence of RIPE is notable. Whole lung V5 appeared to be the most significant independent risk factor for symptomatic RIPE.

Pulmonary toxicity is a known concern for the use of TRT [12–20]. The total dose of radiation, fraction sizes, volume of lung exposure, and the concurrence of chemotherapeutic treatments have been shown to be factors for toxicity to the lung [13, 21, 22]. Radiation-induced lung injury includes bronchial stenosis, lung edema, pleural effusions, fibrosis, and pneumonitis [23]. As a late effect after TRT, pleural effusion is often induced by inflammation and immune cells such as macrophages and CD8+ T cells. Radiation-induced lung toxicity (pneumonitis and fibrosis) occurs in 10% to 30% of patients following TRT [24, 25]. Interstitial pulmonary effects are observed in patients undergoing radiotherapy for bone marrow transplantation [26–29]. Previous partial-volume irradiation parameters were derived from literature reviews and the experience of radiation oncologists [20, 30]. The tolerance doses (TD) for less than 5% risk of lung injury within 5 years of radiation exposure for 1/3, 2/3 or 3/3 of lung volume were empirically considered to be 45, 30, and 17.5 Gy, respectively [20]. Recently, dosimetric factors such as V20 and mean lung dose have been developed to assess the risk of symptomatic radiation-induced lung toxicity (RILT), primarily the development of pneumonitis and fibrosis [22, 31, 32].

To date, a majority of studies investigating risk for lung toxicity in response to radiation have focused primarily on development of pneumonitis and fibrosis [30]. Pleural effusions are frequent manifestations of a variety of systemic and local diseases and are readily and frequently detected on chest radiographs. The appearance of pleural fluid in vivo depends on chest wall and lung elasticity and on pressure relationships. Pleural effusion can also develop after radiation damage to the lungs and is considered to be one of the most common late toxicities after TRT [33–35]. Although pleural effusions have been recognized as an adverse effect of radiation exposure for over 50 years, the frequency and risk factors have not been systematically studied during the last two decades [36]. We investigated the rate of thoracic radiation-induced pleural effusion (RIPE) and its risk factors for RIPE in patients with lung cancer.

Chemotherapy regimens were mainly based on carboplatin with paclitaxel, or cisplatin with etoposide. Patients were followed per standard of practice. At follow-up, a history, physical examination, and CT of chest or PET-CT were obtained. Chest CT scans and PET/CT were reviewed to evaluate RIPE. Adverse events were graded retrospectively according to the National Cancer Institute-Common Toxicity Criteria Version, version 4.0. Symptomatic effusion was defined as effusion ≥ grade 2. The following clinical factors were investigated in relation to RIPE: age, gender, race, ECOG score, histology, clinical stage, smoking status, chemotherapy, and radiation dose.

The diagnosis of pleural effusion was independently assessed by one physician, and was spot checked by another physician. Several previous studies reported models based on simple measurement from the chest radiographs to estimate the volume of pleural effusions [38–41]. Patients with fluid loculation were not excluded. We selected the model from Hazlinger, et al. [40], who reported the dimension of effusion depth as the best planar measurement which was significantly correlated with the actual PE. The model described by Hazlinger, et al., estimates the PE volumes from CT scans using the formula: the volume of PE = 0.365 × b3 – 4.529 × b2 + 159.723 × b – 88.377, where b was the depth measured perpendicularly to the parietal pleura on transversal CT scan where the greatest depth was found by scrolling through all the images [40]. An example of measurement is shown in Figure 1. New pleural effusion or increased volume of PE after TRT without evidence of tumor progression was considered to be RIPE. To determine the most relevant dose-volume parameter, a receiver operator characteristic (ROC) curve was constructed. The Youden Index was used as the optimal cutoff from the curve, which is defined as sensitivity + specificity-1. 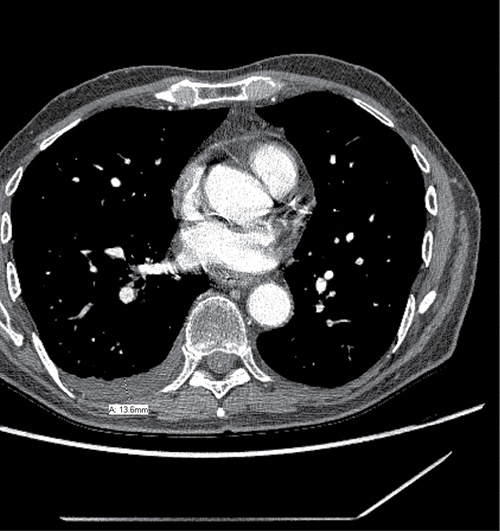 Time to RIPE was calculated from the last day of TRT to the date at which pleural effusion was observed on the follow-up scan. Patients without pleural effusion (PE) were censored at the last follow-up or death. The overall survival (OS) was defined as the interval between the date of treatment initiation and the date of death, or time of the last follow-up for patients still alive, which was estimated using the Kaplan-Meier method. The logistic regression model was used for multivariate analysis. All analyses were two-sided and differences were considered statistically significant at p < 0.05. Statistical analyses were performed employing SPSS, version 19.0 (SPSS Inc, Chicago IL).

Of 806 patients treated with TRT between 2004 and 2013, 175 with post-treatment imaging available in our electronic medical system and with no evidence of thoracic disease progression were included in this study. The characteristics of the eligible patients were summarized in Table 1. The median OS was 20.5 (range, 6.37–113.2) months. Concurrent chemotherapy was administered to 119 patients.

Baseline demographic and clinical characteristics of the patients at diagnosis. 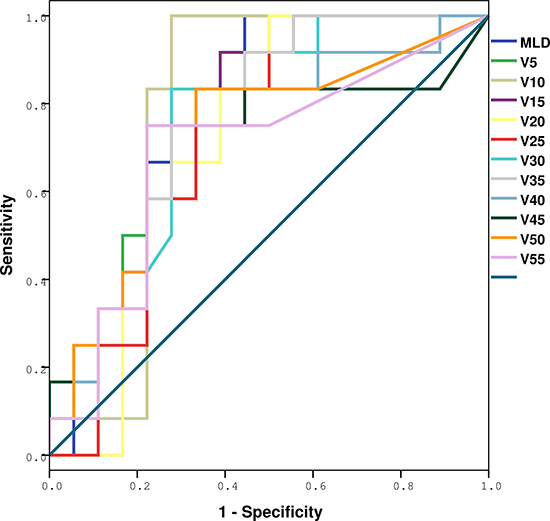 Correlation of RIPE with overall survival 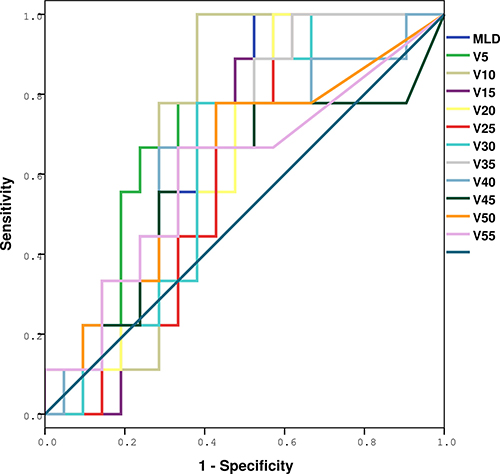 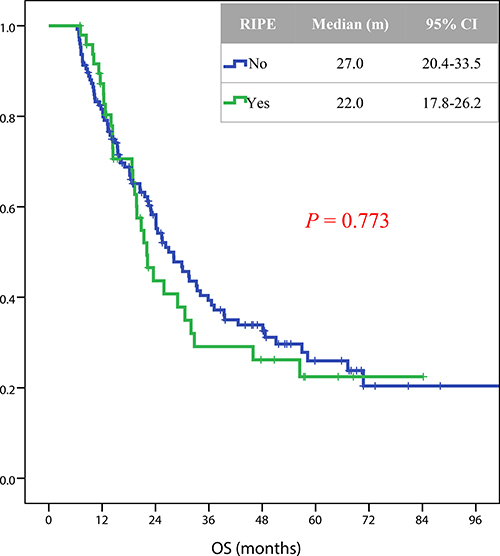 Figure 4: Kaplan-Meier estimates of OS in 205 patients with or without RIPE after radiotherapy. Definition of abbreviations: OS = overall survival; RIPE = radiation-induced pleural effusion.

This study demonstrated that RIPE occurred in 29.1% of patients treated with TRT. In 80% of patients with RIPE, there was an association with significant symptoms, such as chest pain and shortness of breath. Lung dosimetric factors were significantly greater for patients with RIPE, but only V5 was statistically significant for symptomatic RIPE in this series. Interestingly, Caucasian race and squamous cell tumor histology were each associated with a lower risk for RIPE.

Dose-volume parameters that predict the occurrence of RIPE include the dose of radiation and the volume of the lung exposed to radiation. Our study indicated that although patients with RIPE had exposures from V5-V55, only V5 was a significant risk factor for RIPE. According to the latest National Comprehensive Cancer Network guidelines, the limit of lung volume receiving more than 20 Gy and 5 Gy (V20 and V5) were 35% and 65%, respectively [35]. The data used to generate these guidelines were largely obtained from studies of symptomatic radiation pneumonitis, and did not take into consideration symptomatic RIPE as a late side effect. In our current study, we found that < 41.5% could be a threshold to avoid a high risk of RIPE, suggesting that potential benefit of better treatment plans with more stringent limit of V5 to decrease the risk of late symptomatic RIPE. Future studies should validate our findings by defining pleural surface and generate the pleural dosimetry as one of organs at risk for RT planning in the clinic and consider RIPE in animal studies.

This etiology of pleural effusions following radiation treatment of thoracic cancers remained to be studied. The presence of pleural effusions in malignancy often correlate with changes in the disease course and predict changes in responses to cancer therapies [44, 45]. However, both non-inflammatory and inflammatory reactions to radiation can cause increased fluid in the pleural cavity [42, 46]. Normally, the pleural surface is surrounded by ~15 ml of acellular, clear fluid that acts as a lubricant for the thoracic cavity. Post-RT pleural effusion could also be from benign pleural causes such as cardiac, kidney or liver failure, infections (such as tuberculosis, pneumonia, lung infarcts, lung abscess, and bronchiectasis), systemic disorders (such as rheumatoid arthritis, systemic lupus erythematosus, uremia, or systemic infections), trauma, or radiation therapy.

The biology or cytopathology of pleural effusions following ionizing radiotherapy has also not been systematically studied [47]. One study examined specimens from 55 irradiated patients with pleural effusions and identified bizarre cells, but no other distinctive cytologic changes [47]. Increased secretion into the pleural space is thought to involve a wide variety of cells, including mesothelial, endothelial, myeloid, and lymph cells [44]; in the case of malignant pleural effusions (MPEs), tumor cells are also thought to contribute significantly to secretions [44]. Tumor volumes and tumor metabolic activities, as well as the unique tumor secretome have been demonstrated to affect MPEs, which are a common complication of advanced malignancy [45]. A variety of biochemical markers have been identified in MPEs, including pH, lactate dehydrogenase, neutrophil-to-lymphocyte ratio, and the protein surviving, and attempts have been made to correlate these factors with patient prognosis [45]. Reasons of MPE cannot explain RIPE as we only elected those without tumor progression for radiation induced toxicity.

Murine model studies of the effects of thoracic irradiation have demonstrated that pleural effusions occur in a number of rodent models including rats and some strains of mice [35, 48]. Whole thorax irradiation was also demonstrated to induce hypoxic respiratory failure, cardiac injury, and pleural effusions in Wistar rats [35]. However, recent recommendations have been to select murine strains that do not exhibit pleural effusions in studies of radiation-induced lung injury [35, 48]. In light of our current finding, the study of murine models that do develop RIPE is essential to the understanding of the complexity of radiation-induced injuries to the thoracic tissues in patients. The use of murine models with RIPE would additionally aid in the understanding of the mechanism(s) of pleural effusion in response to ionizing radiation as well as the identification of cytologic alterations that occur. Considering the relative high rate of RIPE and its clinical significance, future studies are needed to understand the mechanism in both animal models and patients.

One or more of the authors are employees of the U.S. Government and this manuscript was prepared as part of their official duties. Title 17 U.S.C. §105 provides that ‘Copyright protection under this title is not available for any work of the United States Government.’ Title 17 U.S.C §101 defined a U.S. Government work as a work prepared by a military service member or employees of the U.S. Government as part of that person’s official duties. The views in this article are those of the authors and do not necessarily reflect the views, official policy, or position of the Uniformed Services University of the Health Sciences, the Armed Forces Radiobiology Research Institute, Department of the Navy, Department of Defense or the U.S. Federal Government.

Other authors have no potential conflicts of interest to disclose.