Lung cancer is a major disease burden that accounts for 1.2 million deaths globally every year [1]. Although substantial effort has been invested in lung cancer research, therapeutic outcomes are poor. Recently, the role of vitamin D has been recognized in several tumors, including lung carcinoma.

After initial screening of 2122 abstracts that were identified from online research databases, 33 were considered for inclusion. After carefully reading the full texts, three studies were excluded because they were related to total cancer incidence or mortality rate [20–22]. Three other articles were excluded because they focused only on vitamin D receptor or gene polymorphisms [23–25]. Four publications [26–29] were excluded because they were repetitive studies of three other publications [30–32]. Two studies didn’t provide the exact OR [25, 33], and we obtained data from one of them from the authors [25]. Finally, 22 studies were selected for this meta-analysis. The flowchart of the study search and selection process is reported in Figure 1. 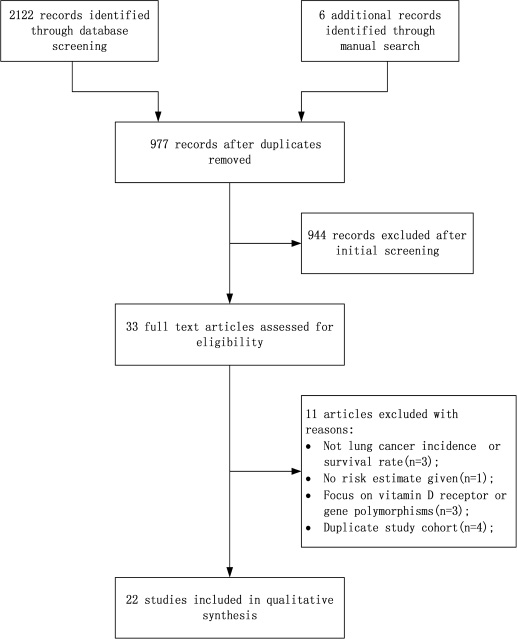 The main characteristics of the 22 included studies are listed in Table 1. All eligible studies were published from 2005 to 2016 and included 813801 participants. Among the 22 studies, 8 were performed in Europe, 9 in North America, 4 in Asia and one in Oceania. Six of the 22 studies were case-control studies that included lung cancer patients of different stages and normal individuals undergoing routine physical examinations as controls. The remaining 16 studies were cohort studies that recruited general population during health check-ups. Fasting serum samples were collected at the time of recruitment. Patients were categorized into the following 4 categories based on serum 25(OH)D levels: (1) sufficient levels, ≥ 20 ng/ml(50 nmol/L); (2) insufficient levels, 10–19.9 ng/ml (25–49.9 nmol/L); (3) deficient levels, 5–9.9 ng/ml (12.5–24.9 nmol/L); (4) severe deficient levels, < 5 ng/ml (12.5 nmol/L). The enrolled papers exhibited moderate to high quality.

Table 1: Characteristics of the selected studies 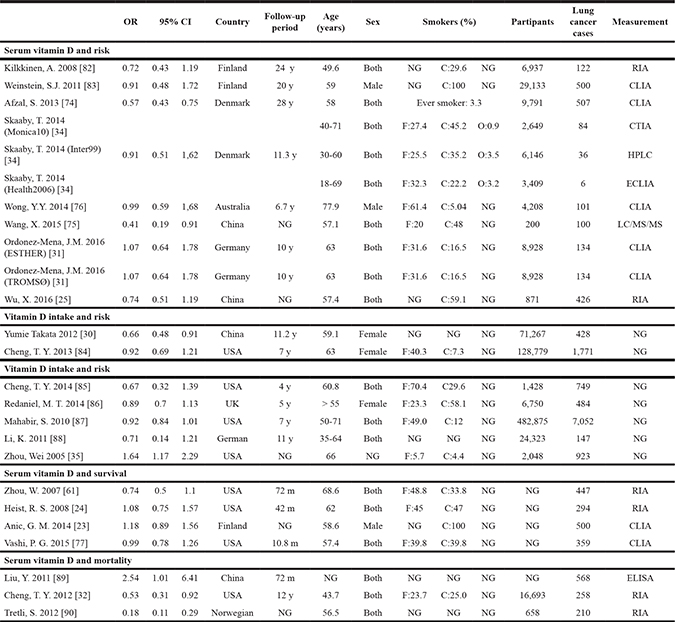 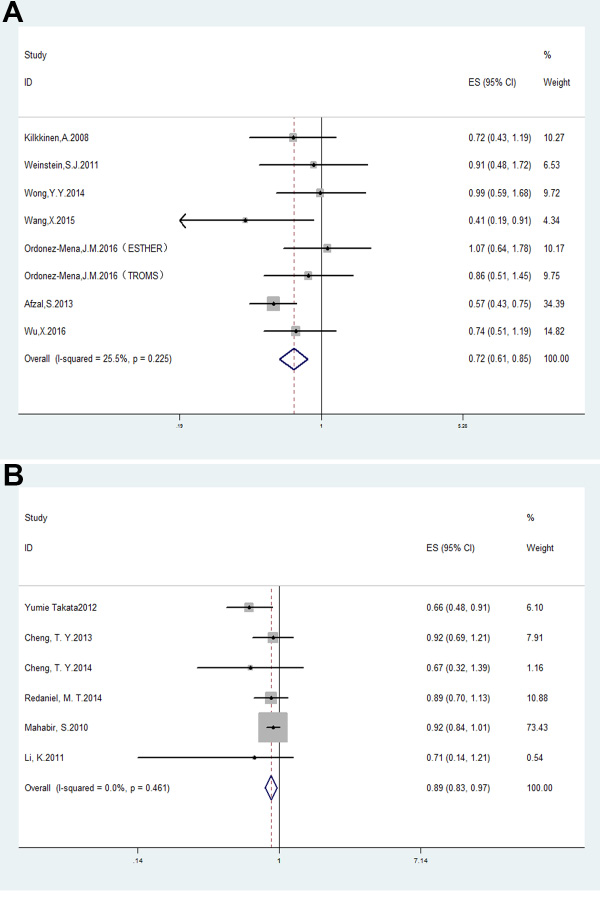 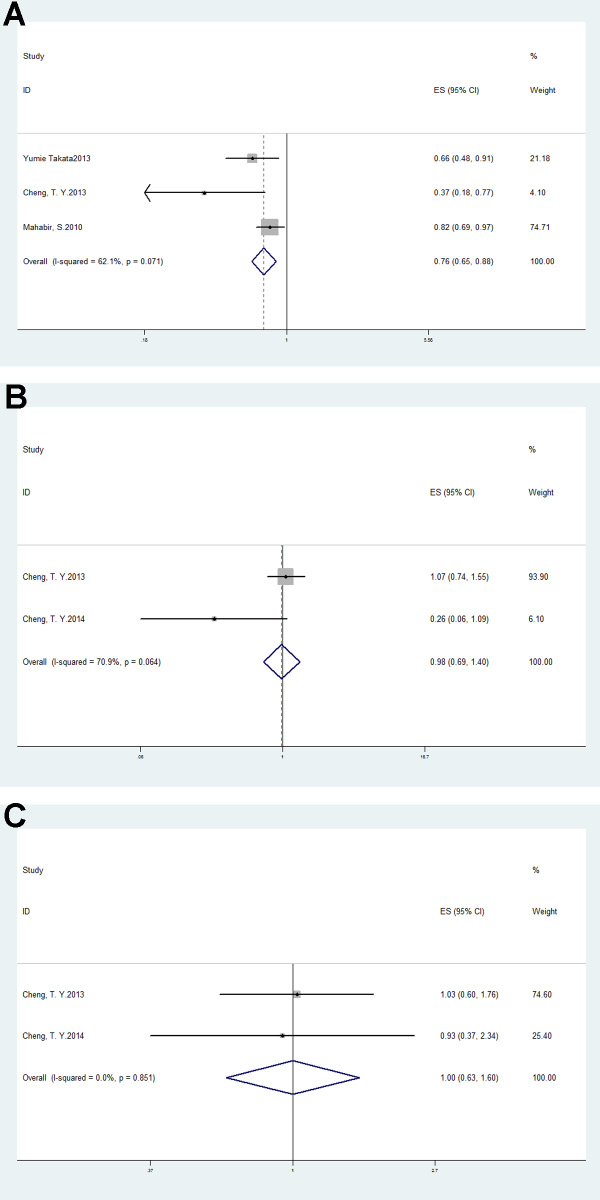 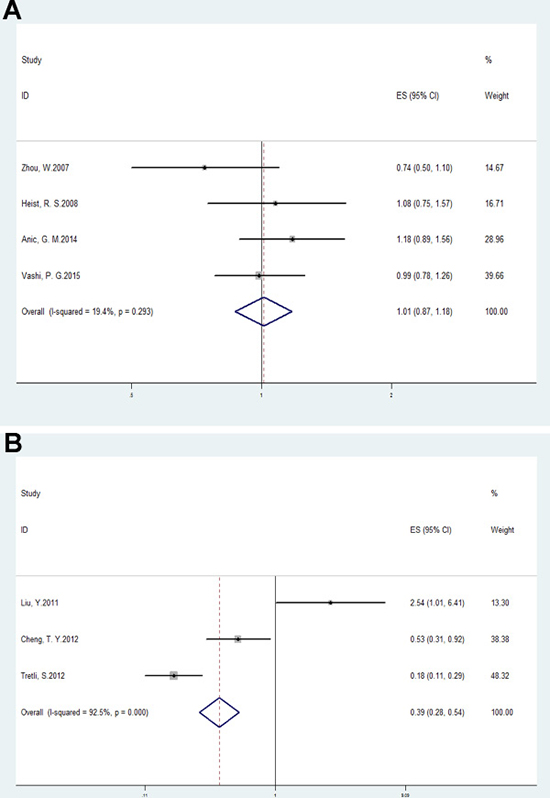 Symmetrical funnel plots demonstrated that there was no publication bias in this meta-analysis (Supplementary Figure 2). Further, sensitivity analysis by removing single study in turns exhibited no disproportionate impact on the pooled estimates, which indicated the robustness of our research.

Some studies showed a positive correlation between the incidence of lung cancer and latitude [36, 37]. Lin et al. found that UVR exposure was associated with decreased risk of lung cancer [HR = 0.86 (0.75, 0.98), p < 0.5] [38]. A Chinese study exhibited a 12% decrease in lung cancer mortality for every 10 mW/ (nm/m2) increase in UVB irradiance [39]. Due to insufficient data sources and high heterogeneity in available data, we failed to statistically prove that higher latitude and lower sun exposure resulted in higher incidence and mortality of lung cancer. Vitamin D synthesis partly relies on exposure to solar ultraviolet radiation, which is affected by duration of daily sunshine, latitude and season [40]. We compared vitamin D levels with annual sunshine exposure and latitude of the cities where the included researches were conducted. As expected, we discovered a positive relationship between vitamin D concentrations and annual sun exposure (r = 0.807, p < 0.001) and a negative correlation between vitamin D levels and latitude (r = –0.62, p < 0.01). This outcome indirectly verified our hypothesis.

Interestingly, there was no association between blood vitamin D levels with lung cancer survival in our analysis. There are several possible reasons to explain this finding. First, the vitamin D concentrations in our study were too low (average value = 17.7 ng/ml) to observe any significant impact on the prognosis. Clinically, vitamin D levels below 20 ng/ml are considered deficient [60]. Less physical activity, insufficient sunlight exposure and high latitude related to these chosen studies may account for low vitamin D levels. There is probably a threshold effect for serum vitamin D or differential effects for vitamin D from foods and supplements in regard to lung cancer prognosis. Second, the disease stage was far too advanced in the selected patients for vitamin D levels to influence prognosis. A US study collected serum samples from 447 early stage non-small cell lung cancer patients shortly after diagnosis and found higher circulating 25(OH)D correlated with longer survival, especially among early stage IB-IIB patients (AHR, 0.45; 95% CI, 0.24–0.82; p = 0.002) [61]. We can assume that malignant cells decreased the expression of vitamin D receptor or conversion of 25(OH)D to 1,25(OH)2D to escape the antiproliferative actions of vitamin D, and this may be more prevalent in advanced-stage cancers than earlier stages [62]. Thirdly, the various histological types of lung cancer in the selected studies may respond differently to vitamin D. Vitamin D suppressed growth of a lung squamous cell carcinoma (SCC) cell line, but not an adenocarcinoma cell line with higher vitamin D receptor mRNA levels in the SCC cell line compared to the adenocarcinoma cell line [63]. Lastly, vitamin D may not influence prognosis in advanced lung cancer patients.

Consistent with previous findings [64–66], we observed that poor sun exposure or high latitude resulted in reduced serum vitamin D levels. Latitude-dependent variability in the solar zenith angle and higher ozone columns far from the equator may contribute to this variation in UVB irradiation, thereby influencing variation in vitamin D production [66]. We further postulate that latitude, sun radiation and lung cancer may be linked through of the metabolic role of vitamin D or other unknown mechanisms. More studies are necessary to confirm these aspects conclusively.

Our study has few inherent potential limitations that should be considered. First, the selected studies evaluated circulating 25(OH)D levels with different measurements, and the time (time quantum, season) of collecting blood sample was not always consistent. Second, a meta-analysis of observational studies cannot fully explain the causative relation between vitamin D and lung cancer. As most of the included articles were prospective cohort studies and serum samples were collected at the time of initial recruitment, from a point we can assure it is low vitamin D leads to lung cancer, not the reverse causation. Third, Skaaby et al. reported that high physical activity, lower BMI, non-smoking, a healthier diet and higher alcohol intake were associated with higher 25(OH)D levels [56]. The original studies had already adjusted for such covariates and bias introduced by these potential confounding factors was probably minimized. Fourth, the quartiles for highest vs. lowest vitamin D categories varied among the different studies, which was an inherent bias in the quantitative assessment. Fifth, even though we attempted to perform our literature search as completely as possible, we were unable to obtain unpublished papers and our search language was restricted to English only. Despite these limitations, no significant heterogeneity was found, thereby indicating robustness of our meta-analysis. Also, funnel plot analysis didn’t discover any publication bias, suggesting that the studies used for this analysis were representative of clinical circumstances.

In conclusion, our meta-analysis suggests that higher serum 25(OH) D and vitamin D intake is negatively linked with lung cancer incidence. Since sun exposure and latitudes affect vitamin D levels, our meta-analysis hints at their relationship with lung cancer, although more investigations are needed regarding this aspect. Also, well-designed randomized controlled trials are needed to explore the specific mechanistic relationship between vitamin D and lung cancer prognosis.

The major exclusion criteria were as follows: (1) articles did not satisfy the above-mentioned inclusion criteria; (2) articles were case reports, letters, proceedings, abstracts, editorials or reviews; (3) unpublished sources of data.

The following information was collected from each study: year of publication, first author, country, age, sex, number of participants, number of lung cancer cases and smokers, vitamin D levels, years of follow-up, OR (or RR, HR) and its 95% CI.

The quality of the selected studies was analyzed using the Newcastle-Ottawa Scale [67]. The literature selection, methodological quality assessment and data extraction process was conducted separately by two experienced reviewers and any disagreement was resolved by a third reviewer. This meta-analysis was performed in compliance with the Preferred Reporting Items for Systematic reviews and Meta-Analyses (PRISMA) guidelines [68] (Supplementary Table 1).

Since the absolute lung cancer risk is relatively low, the RR and HR were mathematically equal to OR [69, 70] and therefore, we treated all results as OR [71]. The reported OR with their corresponding 95% CIs comparing highest and lowest levels of vitamin D were used to calculate pooled estimates for the meta-analysis (the lowest level category was the reference). If the original paper didn’t use the lowest exposure level as the reference, the OR were recalculated with the method according to Greenland et al. [72] and Orsini et al. [73]. Therefore, raw data from 5 reports were recounted [31, 74–77].

The pooled OR and 95% CI were calculated by using fixed effects model according to generic inverse variance or random effects model using the DerSimonian-Laird method based on heterogeneity [78]. Heterogeneity was evaluated by employing the Cochran Q test with a P value greater than 0.05 suggesting no obvious heterogeneity [79]. The I2 test was also used to assess the heterogeneity between studies. I2 values of 25, 50, and 75% indicated low, moderate, and high heterogeneity, respectively [80]. When I2 was under 50%, studies with a relatively acceptable heterogeneity were considered, and the fixed-effects model was adopted; otherwise, a random effect model was employed. We also performed sensitivity analysis to explore the stability condition of pooled estimates by omitting single study at a time. Further, visual inspection of the funnel plot was used to detect the possible risk of publication bias [81]. The Spearman linear correlation analysis was used to analyze the relations between annual sunshine exposure, latitude and vitamin D. All meta- analyses were conducted with the STATA 12.0 (Stata Corporation, College Station, TX, USA) and RevMan 5.3 software (Cochrane Library, Oxford, UK). Spearman linear correlation analysis was operated with SPSS 17.0 (IBM, Chicago, IL, USA).

This study was supported by grants from the Public Technology Research and Social Development Projects of Zhejiang province (2014C33206).