Genome-wide association studies have identified that TERT gene was associated with telomere length and age-related diseases. However, little study directly focused on the association between TERT gene polymorphisms and risk of coronary heart disease (CHD). We conducted a case-control study to examine the effect of TERT polymorphisms on CHD risk among 596 CHD patients and 603 healthy controls from China. Five significant single nucleotide polymorphisms (SNP) in TERT were selected and genotyped using Sequenom Mass-ARRAY technology. Odds ratios (OR) and 95% confidence intervals (CIs) were calculated using unconditional logistic regression adjusting for age and gender. Allelic model analysis revealed that for TERT rs10069690, allele frequency distributions differed between cases and controls (OR= 1.267, 95%CI = 1.018-1.576; p = 0.034). Genotypic model analysis revealed that genotype frequency distributions of rs10069690 differed between cases and controls after adjusted by age and sex (TC vs. CC: adjusted OR = 1.352, 95% CI = 1.007-1.815; p = 0.045). Genetic model analysis revealed that rs10069690 was associated with an increased risk of CHD under co-dominant, dominant, over-dominant and log-additive models. After adjustments, it remained significant under over-dominant model (adjusted OR = 1.35, 95% CI = 1.01-1.81; p = 0.044). Our results shed new light on the association between telomere-related gene TERT polymorphisms and CHD susceptibility in a Chinese Han population.

Coronary heart disease (CHD), including myocardial infarction, angina pectoris and arteriosclerosis of the coronary arteries, is the leading cause of disability and mortality world-wide [1–3]. Previous studies have revealed that CHD is a complex polygenic disease, and genetic factors are crucial to an individual’s susceptibility to CHD. [4]. To date, genome-wide association studies (GWAS) have identified more than 40 common variants associated with the risk of CHD [5, 6]. However, this is not enough to explain the etiology of CHD. In recent years, researchers were still working on looking for novel susceptibility locus for CHD and replicating significant single nucleotide polymorphisms (SNP) in different populations.

Telomeres are located at the ends of chromosomes, which consist of tandem (TTAGGG)n nucleotide repeats and some binding proteins [7]. The average telomere length is about 10-15 kb in human somatic cells, and shorten in most cells with aging [8]. Telomere plays a significant role in maintaining the stability and integrity of the genome [9]. Telomerase reverse transcriptase is required to keep the maintenance of telomere [10]. Loss of telomere function and infinite proliferation leads to genomic instability and chromosomal abnormalities, which may promote carcinogenesis [11].

The TERT gene at 5p15.33 encodes the catalytic subunit of telomerase reverse transcriptase, which is an important component of telomerase. GWAS studies have identified that TERT gene was associated with telomere length and age-related diseases [12]. However, little study directly focused on the association between TERT gene polymorphisms and CHD risk. We performed a case-control study to analyze the association between five SNPs in TERT and the risk of CHD in a Chinese Han population.

Table 1: Characteristics of cases and controls included in this study

a The p value was calculated from Pearson’s chi-square tests.

b The p value was calculated by Welch’s t tests.

The minor allele frequencies (MAFs) of the analyzed SNPs in the case and control groups are shown in Table 2. All SNPs were in Hardy-Weinberg equilibrium (HWE) in the controls (p > 0.05). The MAFs of the SNPs in the control group were similar to those reported for the HapMap Asian population. Using chi-square tests, we determined that rs10069690 was associated with a 1.267-fold increase in the risk of CHD (95%CI = 1.018-1.576; p = 0.034). No significant associations were detected between the other SNPs and CHD risk.

Table 2: Allele frequencies in cases and controls and odds ratio estimates for CHD

Table 3: Genotypes frequencies of the SNPs and their associations with risk of CHD

a P values were calculated from unconditional logistic regression analysis.

b P values were calculated by unconditional logistic regression analysis with adjustments for age and gender.

We assumed that the minor allele of each SNP was a risk factor compared to the wild-type allele. Five genetic models (co-dominant, dominant, recessive, over-dominant and log-additive) were applied to analyze the associations between the SNPs and CHD risk using an unconditional logistic regression analysis with adjustments for age and gender (Table 4). We found that rs10069690 was associated with an increased risk of CHD under co-dominant, dominant, over-dominant and log-additive models. After adjustments, it remained significant under over-dominant model (adjusted OR = 1.35, 95% CI = 1.01-1.81; p = 0.044).

Table 4: Association between rs10069690 and risk of CHD in multiple inheritance models (adjusted by age and gender)

We further characterized the SNPs in TERT SNPs using LD and haplotype analyses. One block including rs10069690 and rs2242652 was detected (Figure 1). However, we didn’t found any significant result in the haplotype analysis (Table 5). 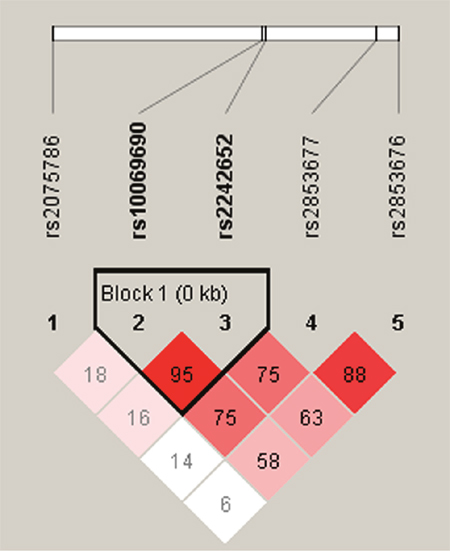 Figure 1: D’ linkage map for the five SNPs in TERT.

Table 5: TERT haplotype frequencies and the association with the CHD risk

TERT gene encodes the telomerase reverse transcriptase, which is really important to keep the balance of telomere length [13]. It has been demonstrated that mean leucocyte telomere length is a predictor of the development of CHD, and differences in biological ageing might contribute to the risk and variability in age of onset of CHD [14]. In the present study, we further demonstrated that TERT gene polymorphisms were associated with CHD risk, which shed new light on the association between telomere length and CHD risk. Actually, TERT has been associated with many types of cancer, including lung cancer, urinary bladder, prostate and cervix cancer, and so on [15]. We suggested that TERT gene may have relationship with cancers and disease by influencing the balancing the telomere length; however, the mechanistic details have not yet been elucidated.

In sum, our results indicate that TERT rs10069690 is associated with an increased risk of CHD, which may has the potentially to serve as prognostic biomarker for CHD among the Chinese Han population. Further study will focus on validating our findings with a larger sample and on determining the functional role of these SNPs.

We strictly obeyed the World Medical Association Declaration of Helsinki when using human tissue and signing the study protocol with subjects, which was approved by the Ethical Committee of Weinan Central Hospital. Each participant provided written, informed consent.

All participants in our study were Han Chinese. A total of 596 CHD patients and 603 healthy controls were consecutively recruited between January 2014 and May 2016 in the Weinan Central Hospital in Weinan city, China. Patients were diagnosed with CHD using standard coronary angiography, which revealed ≥ 70% stenosis of the main branch of a coronary artery or aortic stenosis ≥ 50%. Subjects with myocardial infarction, stable angina and unstable angina were classified as CHD subjects. There were no age, sex or disease-stage classification restrictions when enrolling the case group. Controls were healthy people receiving physical examinations in other clinical departments of Weinan Central Hospital. Healthy controls have no congenital heart disease, familial hypercholesterolemia, end-stage renal disease and known vasculitides, which could have affected our study results. Peripheral blood was collected from both cases and controls for DNA extraction.

We used Microsoft Excel and SPSS 17.0 (SPSS, Chicago, IL) statistical packages to perform statistical analyses. All p-values were two-sided and p<0.05 was considered statistically significant. A t test and Chi-square test were performed to compare sex and age differences between cases and controls. Fisher’s exact test was applied to each SNP in the controls to test for departure from Hardy–Weinberg Equilibrium (HWE). Odds ratios (ORs) and 95% confidence intervals (CIs) for the allele and genotype frequencies were calculated using Pearson Chi-square test adjusted by age and sex [30]. Five models (co-dominant, dominant, recessive, over-dominant and log-additive) were used to assess the association between each genotype and the risk of CHD. The effects of the polymorphisms on the risk of CHD were expressed as ORs with 95% CIs, which were calculated using unconditional logistic regression analysis after adjusting for age and gender [31]. Akaike's information criterion (AIC) and Bayesian information criterion (BIC) were applied to choose the best-fit model for each SNP. Finally, linkage disequilibrium (LD) patterns and haplotypes were evaluated using the Haploview software package (version 4.2) [32].

30. Adamec C. Example of the use of the nonparametric test. Test X2 for comparison of 2 independent examples. Ceskoslovenské zdravotnictví. 1964; 12:613.