Positive correlation of cg16672562 methylation with obesity-related traits in childhood obesity, and its independence with underlying HIF3A (hypoxia-inducible factor 3a) genetic background

Most of the identified common genetic variants for complex diseases appear to confer a modest degree of risk, and few causal alleles have been identified [1]. Obesity is largely hereditary, but the genetic basis of obesity is difficult to fully explain. The effect size of the known genetic associations for obesity is small; thus, epigenetic influences on gene regulation may be an important factor in susceptibility to obesity [2]. Genetics, epigenetics, and environmental exposure are likely to interact and contribute to an individual’s risk of obesity [3].

Excessive accumulation of adipose tissue surrounding peripheral organs is a hallmark of obesity. This phenomenon can reduce oxygen pressure, leading to hypoxia and accompanying abnormal inflammatory and metabolic responses [9]. Obesity can cause the human body to enter a state of systemic hypoxia. Hypoxia-inducible factor (HIF), a master regulator of the adaptive response to hypoxia, is involved in the pathogenesis of obesity. HIF3A may function to accelerate adipogenesis [10]. HIF3A methylation and its expression in adipose tissues is fat deposit-specific and are related to obesity and adipose tissue dysfunction [11]. HIF pathways may play important roles in the development of adipose tissue dysfunction in obesity.

In this study, we investigated genetic and epigenetic variations of the HIF3A gene using exome sequencing and target pyrosequencing of up to 692 Korean childhood obesity subjects. We looked at obesity-related differentially methylated regions (five CpG sites: cg27146050, cg46801562, cg22891070, cg16672562, and cg46801675) by pyrosequencing to investigate their associations with glycemic and obesity related traits. Our study suggests that in additions to BMI, the epigenetic perturbations of HIF3A gene were also linked to fasting glucose levels and waist-hip ratio. We found that cg16672562 is most significantly correlated with BMI in childhood obesity. By exome sequencing data of the HIF3A gene in matched subjects, our work suggested that the differential DNA methylation, especially cg16672562, was independent of any underlying HIF3A genetic background.

A summary of the general characteristics of obese children and controls is given in Table 1. The study subjects included extremely obese children (n = 305, average BMI of 31.71 ± 3.94) and lean controls (n = 387, average BMI of 19.44 ± 1.34) in the Korean Child-Adolescent Cohort Study (KoCAS). There was no significant difference between the two groups in age or gender (P > 0.05). The average waist-hip ratio (WHR) and fasting plasma glucose level (FPG) are also described, and, as Table 1 demonstrates, there are significant differences between cases and controls.

Table 1: Summary of the population characteristics for Korea childhood obesity 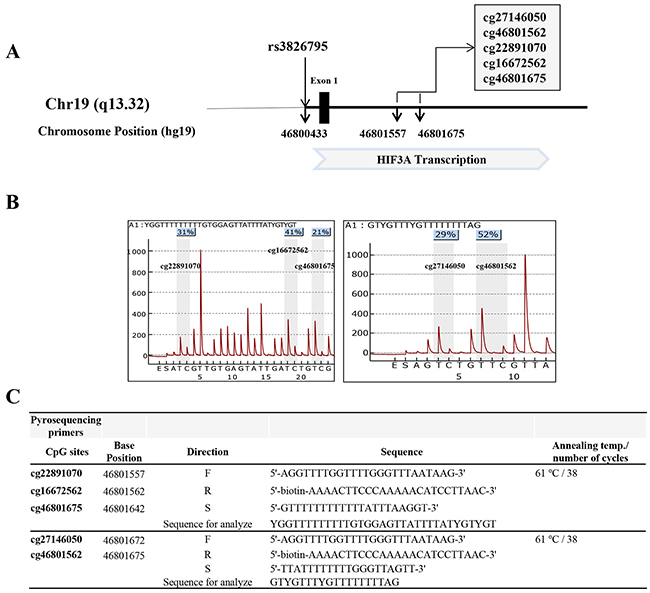 Analysis of target DMPs from controls and cases with childhood obesity 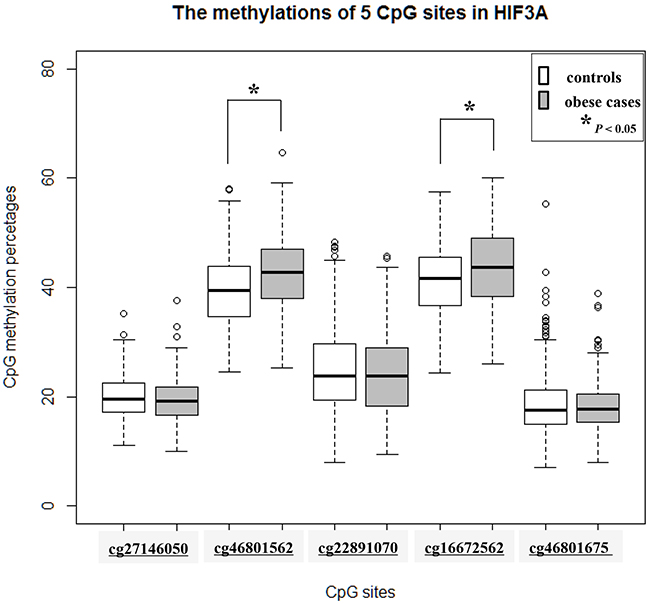 Table 2: The association of 5 CpG methylations in intron 1 of HIF3A gene with childhood obesity

The values are indicated by mean ± SD, P values <0.05 are described as bold characters, BP: base positions, OR: odds ratio.

We found that two DMPs (cg16672562 and cg46801562) are significantly associated with childhood obesity. We investigated the relationship between five differentially methylated DNA sites and other traits to uncover their biological significance. We examined the relationship of the DMPs with fasting plasma glucose level (FPG), BMI and waist-hip ratio (WHR) (n = 667). We used age and sex as the covariates for linear regression analysis. The beta values and P values between each CpG methylation and three traits (BMI, FPG, and WHR) are shown in Table 3.

Table 3: The correlations of 5 CpG methylations of HIF3A gene with glycemic and obesity related traits

By linear regression analysis, two of the five DMPs had statistically significant correlations with BMI and FPG. cg16672562 and cg27146050 were positively correlated with BMI (beta values= 0.2848 and 0.0543, respectively) and FPG (beta values = 0.0944 and 0.0524, respectively). For every 1% increase in cg16672562 DNA methylation, BMI increased by 0.2848 kg/m2 and FPG by 0.0645 g/dL. We used extremely obese cases with an average BMI of 31.71 kg/m2, so our beta value is high compared to that reported in other studies [4]. All five DMPs were significantly associated with fasting blood glucose levels, with cg16672562 having the strongest correlation (beta value = 0.0645). Three DMPs had significant correlations with WHR, and only cg16672562 had a positive correlation, with a beta value of 0.0028 (P = 1.42E-15). Specifically, all DMPs were significantly correlated with glucose-related traits by linear regression analysis. The epigenetic signature of the HIF3A gene may be a cause or a result of the prolonged high blood glucose levels seen in cases of obesity. We found two DMPs that had significant associations with childhood obesity, but only cg16672562 was significantly correlated with all three measures (BMI, WHR and FPG).

Table 4: The associations of 14 SNPs with childhood obesity and their correlations with five CpG methylations of HIF3A gene

A1: minor allele, GL: gene Location, Sys: synonymous, mis: missense, BP: base positions, OR: odds ratio, NO: number of observations, P values <0.05 are described as bold characters. Test was done by additive effects of allele dosage. Age, sex and BMI were used as covariates for logistic and linear regression analysis.

We primarily focused on DMPs of the HIF3A gene that were previously reported in an Infinium study to be involved in adult obesity. Previous EWAS studies of BMI-related DMPs at the the HIF3A locus showed that increased methylation at the 3 CpG sites (cg22891070, cg27146050, and cg16672562) located is associated with increases or changes in BMI [4, 5, 7, 12]. The DMP in this region has already been reported to be involved in adult and childhood obesity, but a different method of quantification of CpG methylation was used (the Illumina 450K Bead Chip array [4, 12] versus the Sequenom MassARRAY system [5]. Wang et al. found cg22891070 (chr 19: 46801642) at the 3 CpG sites (cg22891070, cg27146050, and cg16672562) in the HIF3A gene (P < 0.05) in a study on Chinese childhood obesity. We identified an association between cg16672562 and extreme childhood obesity by pyrosequencing. The degree of methylation of cg16672562 is not comparable with that calculated using MassARRAY data of Wang et al. because the method did not determine changes in cg16672562 only [5]. In case of cg22891070, the difference in methylation between lean and obese children was found to be 24.18% and 24.93% by pyrosequencing (n = 667), and Sequenom’s MassARRAY data showed differences of 25.4% and 27.7% (n = 220) [5]. The BMI-related DMPs that we found are not present in all ethnic groups [12]. In particular, the effect of this region and its statistical significance are greater when the sample population consists of young high-BMI subjects.

Our data support previous reports on the epigenetic association of differential methylation in HIF3A in adults that illustrate the importance of differential DNA methylation of the HIF3A gene in obesity through changes in BMI. Methylation status of five CpG sites showed the significant associations with fasting plasma glucose level only after additional adjustment for age and sex. Overall, it suggests that these variables have influences on the investigated correlations of five CpG methylations with fasting plasma glucose level. Our findings may help improve the understanding of the contributions of epigenetic variation to the predisposition to diabetes.

Dick et al. reported that two SNPs (rs8102595 and rs3826795) were independently associated with methylation at cg22891070 [4]. Our data showed that rs3826795 has a marginal association with cg22891070 methylation (P=0.05), and other 13 SNPs neither have significant association (P>0.05). In general, our data showed that genetic variations located close to the DMR were not significantly associated with BMI-related DNA methylation changes, except cg27146050. A genetic context of the HIF3A locus might not be important for epigenetic modification of cg16672562 in high-BMI children. Further analysis of the newly-identified SNPs may be necessary to explain where and how the sophisticated DNA methylation changes come from, such as long range interactions [12].

The study subjects, who ranged in age from 12 to 15 years, were selected from the KoCAS, which followed a cohort of Korean students using annual questionnaires and investigations at four elementary schools in Gwacheon from the time of the students’ entry into the school (IRB approval number, 2014-08EXP-05-P-A). The overall objective of the cohort study was to identify early risk factors for obesity and associated metabolic diseases in Korean children[13]. We defined “extreme obesity” as a BMI of ≥ 1.2 times the 95th percentile value for the relevant age group or a BMI of ≥ 30 kg/m2, according to the recently proposed definition by the Centers for Disease Control and Prevention. Detailed characterizations of the study subjects are described in Table 1. Informed consent was obtained from the children’s parents.

Two independent PCR studies on bisulfite DNA were performed to identify five CpG sites (cg27146050, cg46801562, cg22891070, cg16672562, and cg46801675). cg46801562 and cg46801675 are named for their chromosome base pair locations (hg19). Target pyrosequencing of CpG sites combines a simple reaction protocol with a reproducible and accurate measure of the degree of methylation [13, 14]. Pyrosequencing assays were designed, optimized, and performed on the PSQ HS 96A System according to the manufacturer’s specifications (Qiagen, USA).

All exons were captured by the SureSelect Human Exon V4 system (Agilent Technologies, Carlsbad, CA, USA) according to the manufacturer’s protocols. The captured DNA was sequenced with an Illumina HiSeq 2500. 100 bp paired-end exome sequencing was performed using a Genome Analyzer (Illumina Inc., San Diego, CA, USA). Base calling was conducted by the Illumina pipeline with the default parameter settings. All sequence data were assembled using the UCSC Genome Browser (GRCh37/hg19) and mapped by BWA (http://bio-bwa.sourceforge.net). Variant detection was performed using SAMTOOLS (http://samtools.sourceforge.net). The average depth of coverage was ~67.2 fold.

To study DNA methylation replication using pyrosequencing, age sex, and BMI were used as covariates. Correlation coefficients between DNA methylation and other traits were calculated with Pearson’s tests and graphed. R scripts were used for all other analytical and graphical processing (http://www.r-project.org/). The genome-wide association study was analyzed using PLINK software (http://pngu.mgh.harvard.edu/~purcell/plink).

These authors declare no conflicts of interest.