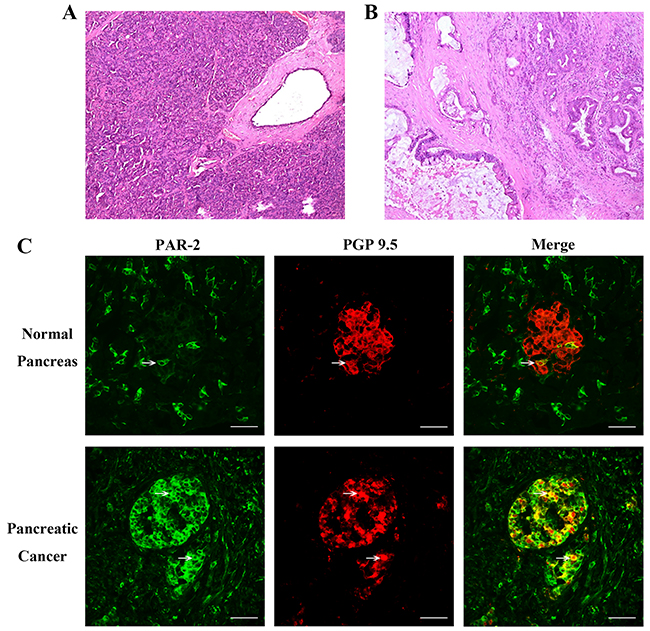 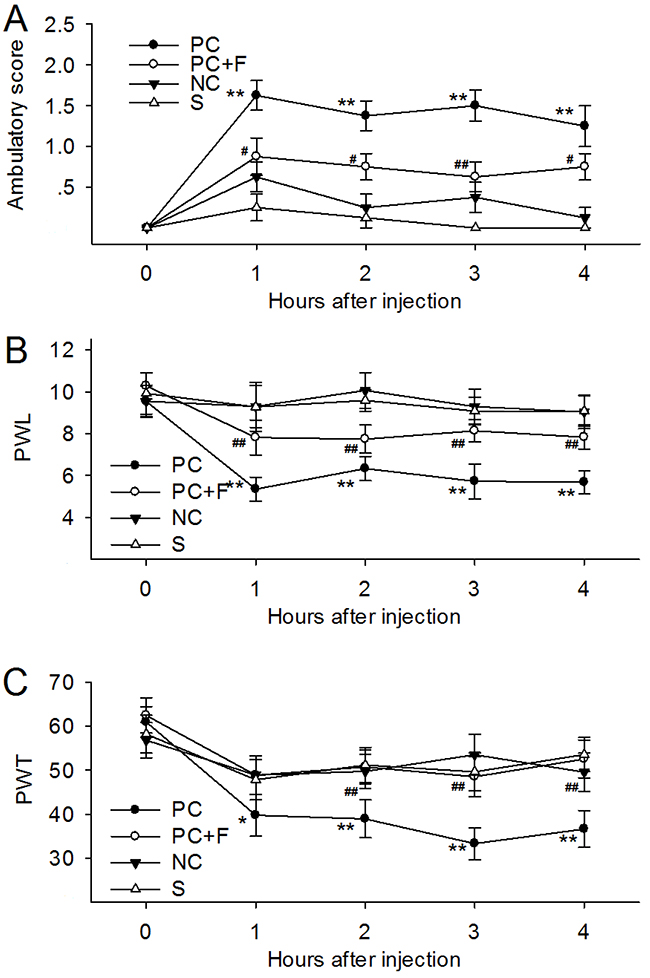 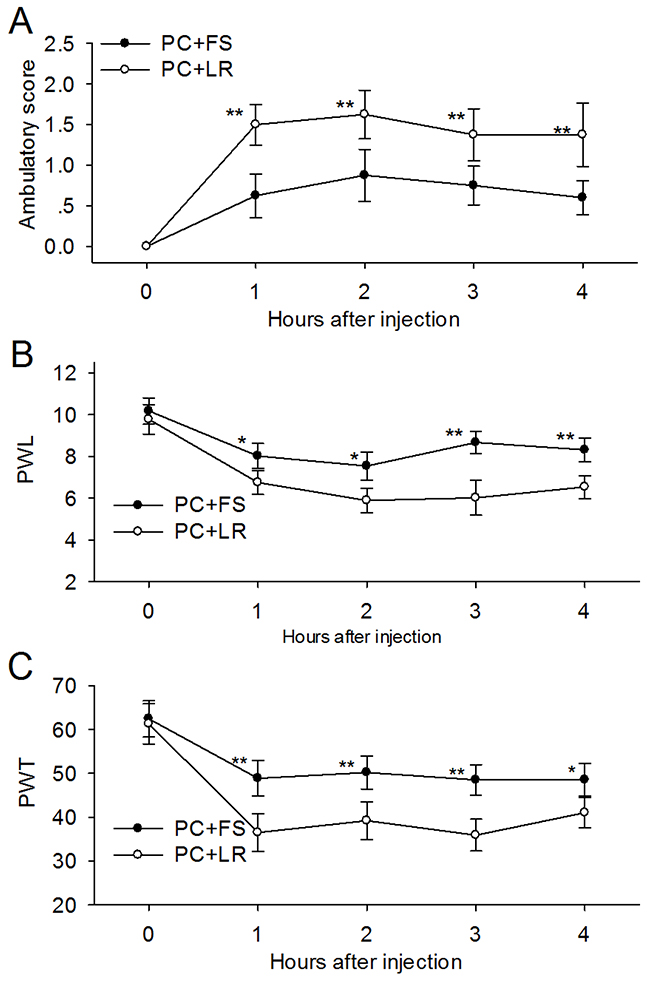 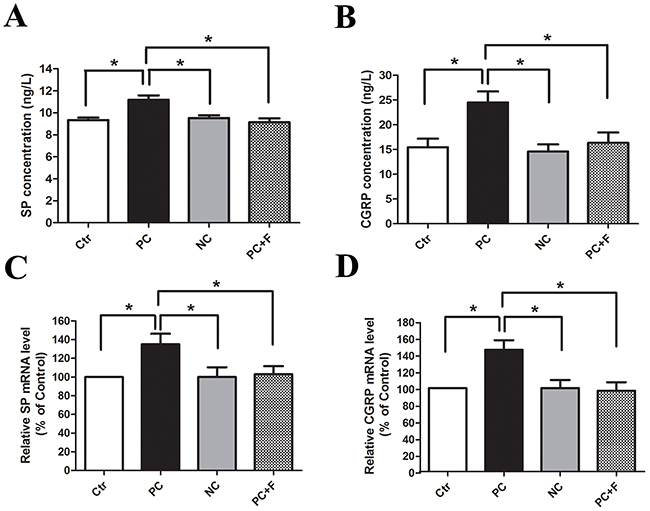 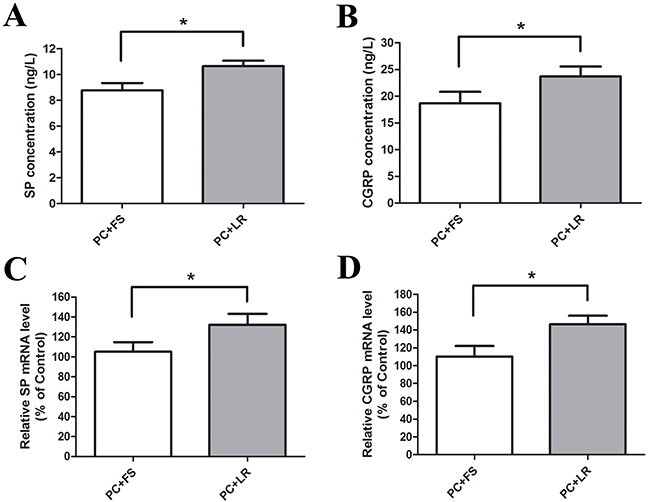 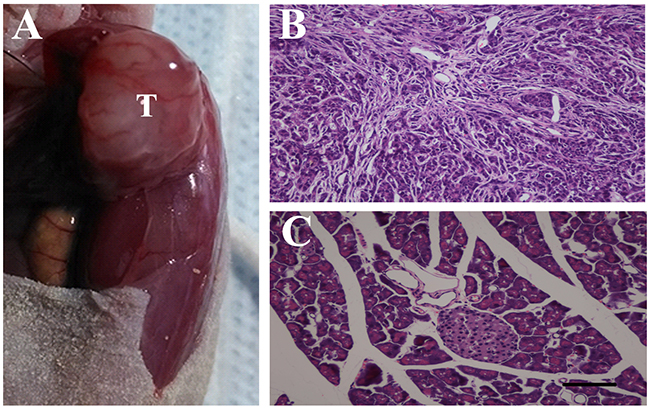 Figure 7: Pancreatic cancer model build by human pancreatic cancer cell line SW1990 in male BALB/c nude mice. (A) SW1990 cells (5×106) in a volume of 20 μL were injected into the body of the pancreas, after 3 weeks, tumors were apparent on the pancreas (T). (B) Immunohistochemistry examination confirmed the success planting of SW1990 cells on the pancreas of naïve mice. (C) Hematoxylin and eosin stained section of pancreatic tissues from control mice. Scale bar = 50μm. 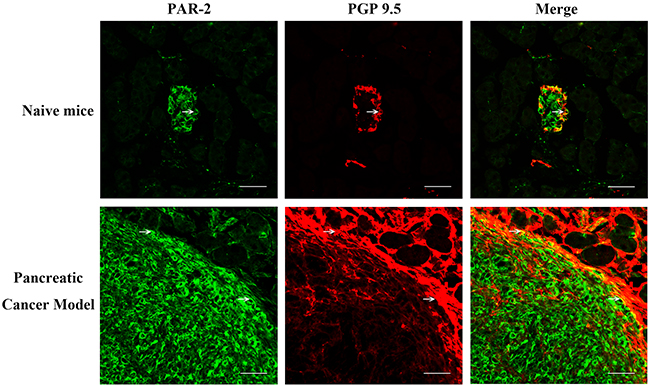 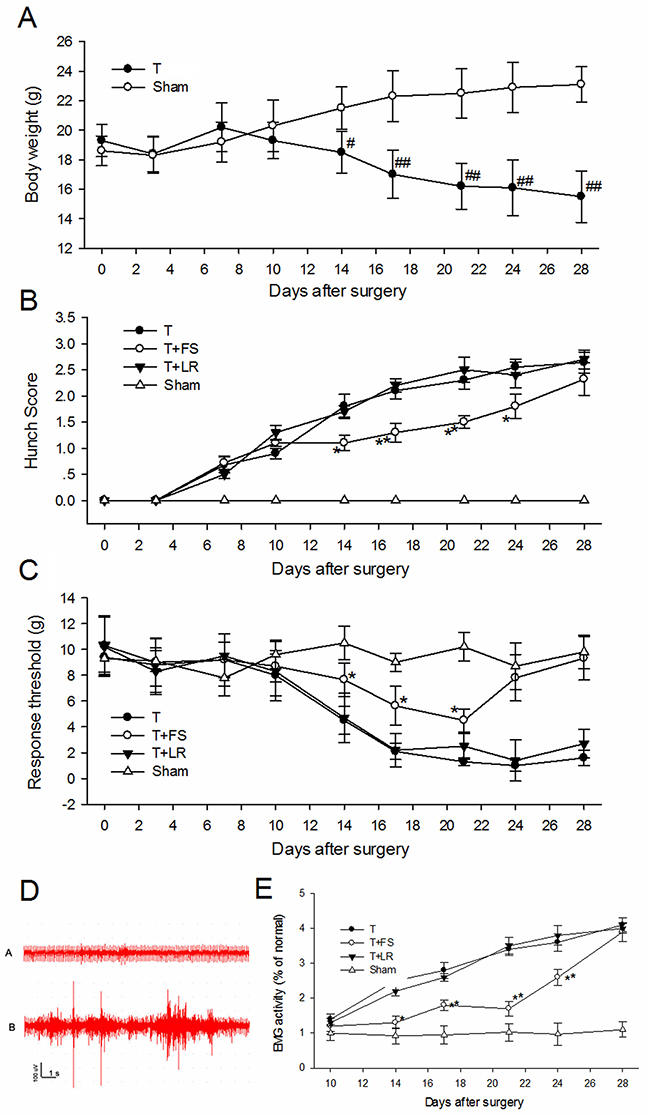 Trypsin triggers nociceptive responses in the pancreas [12, 17]. When persistent noxious stimulation leads to sensitization, small changes in pressure or inflammatory mediator levels may activate sensitized pancreatic nociceptive neurons, leading to amplified pain response [18]. Elevated endogenous trypsin levels and protease activity in pancreatic cancer tissues may have two sources. First, pancreatic tumor cells can secrete tryptase-like molecules, and the tumor microenvironment contains a variety of proteases that can activate PAR-2, which regulates tumor cell proliferation, differentiation, and invasion [19]. Second, pancreatic tumor growth and invasion destroys the integrity of the pancreatic duct and parenchyma, resulting in further trypsin release and activation. We observed that trypsin in normal pancreatic tissues did not induce SP and CGRP release in vitro and elicited no pain response in vivo. This may be due to PAR-2 dose-dependent activation, as previous findings showed that trypsin infusion into the pancreatic duct should reach the subinﬂammatory concentrations necessary to induce both behavioral nociceptive responses and spinal neuron activation [12].

Thermal hyperalgesia in chronic pancreatitis is associated with PAR-2 upregulation in DRGs [29]. Downstream of PAR-2, CGRP and SP, both considered pain neurotransmitters, were observed in nerve fibers from chronic pancreatitis patients. PAR-2 activation can lead to SP and CRRP release from afferent C-fibers in a Ca2+-dependent process. We observed that PC supernatant-induced DRG neurons released SP and CGRP in a PAR-2-dependent fashion. While it is possible that SP and CGRP directly activate primary spinal afferent neurons, PAR-2 activation might induce local neurotransmitter release from peri-pancreatic nerve fibers, triggering neurogenic inflammation events, activated immune cell recruitment, and pain. As the increased proteinase activity observed in our study is also associated with pancreatic inflammation, PAR-2 activation likely plays a role in the generation of pancreatic cancer pain associated with neuron inflammatory states. However, previous work using a pancreatic duct infusion model to test the effects of pancreatic trypsin infusion on pain behaviors found that PAR-2-trypsin signaling mediated pancreatic pain independent of inflammation [29].

The study protocol was approved by the Ethical Committee of the Eastern Hepatobiliary Surgery Hospital, Second Military Medical University, and was conducted from January 1, 2010 to January 31, 2013. Written informed consent was obtained from all patients. 22 patients who had mid abdominal pain and were scheduled for surgery with a tumor in the head of the pancreas were included in this study [30]. 22 patients diagnosed with common bile duct cancer and without abdominal pain were recruited as controls. Patient pain intensity was assessed using a visual analog scale (VAS, 0–10; 0: no pain, 10: worst possible pain) before surgery [31]. Pancreatic and common bile duct cancer diagnoses were confirmed by pathological examination after surgery. All patients had American Society of Anesthesiologists physical status I or II. Exclusion criteria included (1) age >75 or <18 years; (2) diabetes mellitus, or cardiovascular, respiratory, or renal diseases; (3) hepatic encephalopathy, psychiatric illnesses, or neuropathy; and (4) medications known to affect pain threshold. Pancreatic tissues were obtained after elective surgery for further analysis.

Supernatants from cultured human pancreatic cancer (PC supernatant) and normal pancreatic tissue (NC supernatant) samples were obtained as described previously [32]. Fresh specimens were cut into small pieces (20–50 mg) of approximately the same shape, rinsed in saline, and incubated immediately in Hank’s Balanced Salt Solution (HBSS) (100 mg specimens in 2 ml HBSS) at 37°C for 2 h. For all experiments, supernatant volumes were standardized to the weights of incubated biopsy samples and not to supernatant protein concentrations, as protein content was below the detectable threshold in biopsy supernatants. After incubation, supernatants were immediately centrifuged, concentrated 10-fold, frozen in liquid nitrogen, and stored at -80°C until use.

All experiments were performed in accordance with the NIH Guide for the Care and Use of Laboratory Animals and the Ethical Issues of the IASP and were approved by the Second Military Medical University Committee on Animal Care. Male BALB/c nude mice aged 5–6 weeks and male Sprague-Dawley rats (200–250g) were purchased from the Slac Laboratory Animal Co., Ltd. (Shanghai, China). All animals used for this study were housed under a 12-h light/dark cycle in a pathogen-free area with ad libitum access to water and food.

Human pancreatic tissues were fixed in 4% paraformaldehyde overnight, then dehydrated for 48 h in 30% sucrose, embedded, and sectioned into 7-μm-thick slices. Anti-PAR-2 (1:2500, Abcam, Cambridge, MA) and the neuron marker, protein gene product-9.5 (PGP9.5) (1:1000, Abcam), were used for IF assays. All slides were observed and photographed under an Olympus microscope (IX-70 OLYMPUS, Tokyo, Japan).

Sprague-Dawley Rats were anesthetized via intraperitoneal injection of 80mg/kg sodium pentobarbital (Sigma) before being decapitated. DRG from all spinal levels were dissected, incubated at 37°C in enzymatic digestion solution for 25–30 min, and washed twice with Hanks solution. The enzymatic reaction was stopped via addition of Soybean trypsin inhibitor (1.25 mg/mL type II-S; Sigma). Ganglia were gently suspended using glass pipettes, transferred to poly-lysine coated slides, and allowed to stand for 2 h to settle the neurons on slides. Finally, slides were incubated in Dulbecco’s modified Eagle medium (DMEM; Biosource, Camarillo, CA) containing 10% fetal bovine serum (FBS) at 37°C in a humidified atmosphere with 3% CO2. Neurons were used within 2–12 h.

Total protein was assayed for all sensory neuron culture supernatant samples. ELISA kits for SP and CGRP were used (Abcam) according to the manufacturer’s instructions, and microplates were read using a microplate reader (Molecular Devices, Sunnyvale, CA). Data were expressed relative to the normal sample.

To assess mechanical hyperalgesia, animals were acclimated daily for 10 min/d for 3 d to the test environment, which was a plexiglass box on a metal grid surface. On test days, rats were allowed to acclimate for 5–10 min. The nociceptive stimulus, a single rigid filament attached to a hand-held transducer (electronic Von Frey anesthesiometer; IITC, Woodland Hills, CA) was applied perpendicularly to the medial surface of the hind paw with increasing force. The endpoint was taken as nocifensive paw withdrawal accompanied by head turning, biting and/or licking. As soon as this reaction occurred, the required pressure (indicated in grams) was considered the individual PWT value. Both hind limbs of each rat were tested in triplicate per time point. We also measured the required pressure for withdrawal responses to rigid filament application to the abdomen [34]. Any of the following behaviors on application of a hair was considered a withdrawal response: (a) sharp retraction of abdomen; (b) immediate licking or scratching of site of application; (c) jumping.

PWL was measured for both paws as previously described [35]. In brief, rats were placed under an inverted clear plastic chamber on a glass surface. After an adaptation period of 30 min, a radiant heat stimulus was applied to the plantar surface of each hind paw from underneath the glass floor (automatic plantar analgesia tester; Institute of Biomedical Engineering, China). A cutoff time of 25 sec was imposed to prevent tissue damage. Paws were alternated randomly to preclude order effects and PWL was determined as the mean of three measurements per paw.

Rats were placed in a large plastic observation box with a smooth floor. According to the extent of limb use during spontaneous ambulation, scores were characterized as follows: 0, normal use; 1, slight limp; 2, severe limp; or 3, complete lack of limb use. Testing was blinded with respect to groups [36].

Hunching was measured as previously described from the first observation and continued weekly until euthanasia [37]. In briefly, mice were placed individually in the center of an open field arena (100 cm diameter, 30 cm high wall) with solid black walls and a black floor. Hunching behavior was scored from 0 to 4: 0, normal; 1, mild hunching; 2, severe hunching; 3, severe hunching with reduced movement; and 4, no movement. Observers were blinded with respect to groups, with two independent investigators confirming results.

The human pancreatic cancer cell line, SW1990, was purchased from the American Type Culture Collection. Cells were maintained in DMEM (Biosource) supplemented with 10% FBS, 100 units/ml penicillin, and 100 μg/mL streptomycin in a humidified incubator with 5% CO2 and 95% air at 37°C. Cells were released from plastic via 0.1% w/v trypsin, and then collected by centrifugation in 10 ml of medium for 3 min at 1200 rpm. The pellet was washed twice with 10 mL of DMEM, resuspended in 3 mL of DMEM, and then cells were counted using a hemocytometer and trypan blue solution. Cells were diluted to the final concentration for injection and kept on ice. For the sham group, SW1990 cells were diluted to final concentrations for injection and then boiled for 20 min.

Male BALB/c nude mice aged 5–6 weeks were maintained in a barrier facility on HEPA-filtered racks. For orthotopic tumor cell injection, mice were anesthetized with sodium pentobarbital (40 mg/kg) and a 0.5–1 cm incision was made in the left subcostal region. Tumor cells (5×106) in 20 μL were injected into the body of the pancreas [38]. The pancreas was then returned to the peritoneal cavity, and the peritoneum and skin were closed with a 4.0 surgical suture.

VMR in pancreatic pain was previously described [12]. EMG recordings from the acromiotrapezius, a superficial dorsal skeletal muscle group, correlated best to the noxious stimulus in pancreas. A pair of electrodes (MYO/WIRE; A&E Medical Corporation, Farmingdale, NJ) was sutured into the acromiotrapezius muscle in the neck and externalized; the skin was sutured, and the externalized tubing and electrodes were covered with tape. Rats were allowed to recover from surgery. EMG recording was applied at 10:00 AM everyday after an adaptation period of 30 min. Three 10-min recordings were achieved with a 10-min interval period each day. The EMG response was amplified and filtered with 5-kHz low-pass and 10-Hz high-pass filters and digitized with BIOPAC software (Biopac Systems, Goleta, CA). From the rectified EMG, the area under the curve (AUC) was calculated using a computer program (Biopac Systems, Goleta, CA).