*These authors have contributed equally to this paper

This study was conducted to investigate the association between variants in mitotic checkpoint-related genes and clinical outcomes of non-small cell lung cancer (NSCLC). A total of 766 patients with NSCLC who underwent curative surgery were enrolled. Among the 73 variants evaluated, 4 variants were related with survival outcomes. BUB3 rs7897156C>T was associated with worse overall survival under a recessive model (adjusted hazard ratio = 1.58, 95% confidence interval = 1.07–2.33, P = 0.02). AURKB rs1059476G>A was associated with better overall survival under a recessive model (adjusted hazard ratio = 0.64, 95% confidence interval = 0.41–0.99, P = 0.05). PTTG1 rs1895320T>C and RAD21 rs1374297C>G were associated with worse disease-free survival. In the functional study, relative luciferase activity was higher at the BUB3 rs7897156T allele compared to that at the C allele. Western blot showed that the phosphorylation of AKT and mTOR in the AURKB variant-type (M298) was significantly lower than in the AURKB wild-type (T298). We found that 4 variants of mitotic checkpoint-related genes were associated with survival outcomes in patients with surgically resected NSCLC. Particularly, our results suggest that BUB3 rs7897156C>T and AURKB rs1059476G>A are functional variants.

Accurate segregation of chromosomes during mitosis is important to the survival of human cells. Errors in mitosis result in cells with an abnormal number of chromosomes, known as aneuploidy, which can lead to cell-cycle arrest, cell death, or tumorigenesis [1, 2]. Whether aneuploidy is a cause or consequence of cancer remains controversial; aneuploidy has been detected in most solid tumors, including lung cancer [2-4]. Chromosome instability, defined as a high rate of either gain or loss of whole chromosomes and causing aneuploidy, is also one of the hallmarks of human solid tumors [2, 5].

The clinical and pathological characteristics of patients and their association with overall survival (OS) and disease-free survival (DFS) are shown in Table 1. Pathological stage was significantly associated with both OS and DFS in univariate analysis (log-rank P = 9 × 10-13 and 4 × 10-18, respectively). Age, gender, and smoking status were also associated with OS (log-rank P = 0.01, 7 × 10-4 and 8 × 10-4, respectively).

Association between SNPs and survival outcomes

Table 2: Overall survival and disease-free survival according to genotypes in patients with non-small lung cancer. 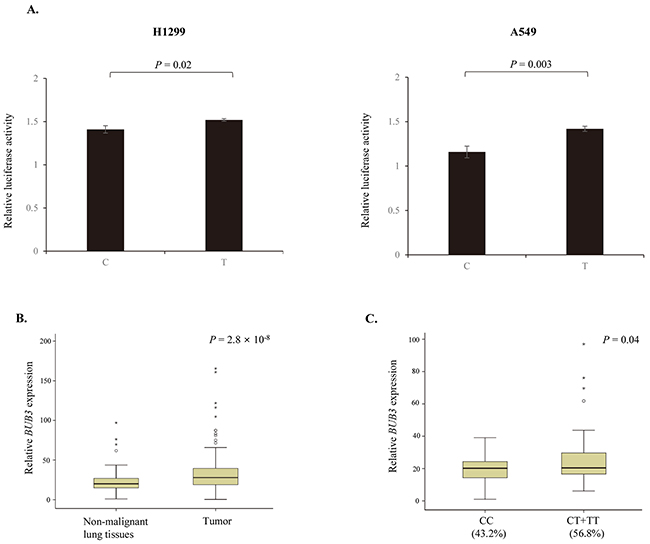 AURKB rs1059476G>A is a non-synonymous SNP. Changing the rs1059476G-to-A results in an amino acid change of threonine to methionine at codon 298. We evaluated whether this amino acid change affects protein function using DelPhi calculation and Pymol (http://pymol.org). As shown in Figure 3, the Thr-to-Met change at codon 298 provides increased hydrophobicity of Aurora kinases B. 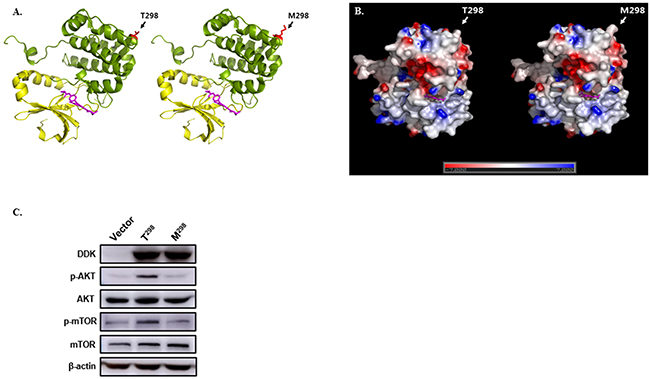 Associations between the overexpression of mitotic checkpoint genes and poor prognosis have been reported in several cancers [23-27]. In the present study, a higher level of BUB3 expression was observed in lung tumor, and worse OS in patients with the BUB3 rs7897156TT genotype was observed. Our finding is biologically plausible given the putative function of the SNP. In the in vitro luciferase assay, the rs7897156C-to-T change increased the activity of the BUB3 promoter. In addition, the rs7897156CT or TT genotypes showed significantly higher BUB3 mRNA expression than the rs7897156CC genotype. These results suggest that BUB3 rs7897156C>T is a functional SNP. Therefore, the rs7897156C-to-T change may have resulted in overexpression of BUB3 and may affect mitotic checkpoint function to influence the prognosis of patients with NSCLC. To the best of our knowledge, this is the first study to show that BUB3 rs7897156C>T is a functional SNP and can affect prognosis of NSCLC.

The family of Aurora kinases (A, B, and C) act as key regulators of mitotic cell division by regulating the functions of centrosomes, bipolar spindle assembly, and chromosome segregation [28]. Up-regulation of Aurora kinases has been reported in various human cancers, and therapeutic inhibition of these kinases are actively researched as anti-mitotic therapies for cancers [9, 28]. In this study, patients with the AURKB rs1059476AA genotype showed better OS than those with the AURKB rs1059476GA or GG genotypes. The rs1059476G>A is located in exon of AURKB and a non-synonymous SNP. The rs1059476G-to-A change results in the replacement of threonine to methionine at codon 298. The prediction of the three-dimensional model using DelPhi calculation and Pymol program showed increased hydrophobicity of Aurora kinases B by the amino acid change of T298M. Western blot for the phosphorylation of AKT and mTOR was decreased in AURKB the variant-type (M298) compared to AURKB the wild-type (T298). However, the biological mechanism between the AURKB rs1059476G>A and survival outcomes remains unclear. Further studies are needed to clarify the role of AURKB rs1059476G>A in cancer.

In the present study, PTTG1 rs1895320T>C and RAD21 rs1374297C>G were associated with worse DFS. The PTTG1 encodes securin, which inhibits the sister-chromatids from separating until late anaphase [29]. Overexpression of PTTG1 and its relationship with poor prognosis were observed in hepatocellular carcinoma and adrenocortical cancer [27, 30]. Li et al. [31] reported that overexpression of PTTG1 was associated with lymph node and distant metastases in NSCLC and was correlated with poor OS. RAD21 is a component of the cohesion complex and is involved in chromosome segregation during mitosis, DNA repair, and apoptosis [32]. Enhanced RAD21 expression was associated with early relapse and poor prognosis of breast cancer and KRAS mutant colorectal cancer [32, 33]. An association between high expression of RAD21 and cisplatin resistance was reported in NSCLC [34].

In summary, we found that 4 SNPs (rs7897156, rs1059476, rs1895320, and rs1374297) in mitotic-checkpoint related genes were associated with survival outcomes of NSCLC. In addition, functional data suggest that BUB3 rs7897156C>T and AURKB rs1059476G>A are functional SNPs. Additional studies are required to confirm the effect of these SNPs in diverse ethnic groups.

By searching published review articles, 32 mitotic checkpoint-related genes were selected [8-10, 35, 36]. Using HapMap database, 2035 SNPs in 32 mitotic checkpoint-related genes were collected. Among the 2035 SNPs, 968 SNPs were excluded because the minor allele frequency was < 0.05 in the HapMap JPT data. To identify potentially functional SNPs, the FuncPred in the SNP info web server (http://snpinfo.niehs.nih.gov) was used and 116 potentially functional SNPs were selected from the remaining 1067 SNPs. Among these, 43 SNPs were excluded because of linkage disequilibrium (r2 > 0.8), based on HaploView (http://broad.mit.edu/mpg/haploview). A total of 73 SNPs in 25 mitotic checkpoint-related genes were genotyped by the MassARRAY® iPLEX assay (SEQUENOM Inc., San Diego, CA, USA). Approximately 5% of the samples were randomly selected to be genotyped again by a different investigator, by a restriction fragment length polymorphism assay, and the results were 100% concordant.

We investigated whether BUB3 rs7897156C>T modulates the activity of the BUB3 gene promoter in a luciferase assay. Promoter fragments of BUB3, including rs7897156, were synthesized by PCR using the following primers: BUB3 forward, 5′-GGGGTACCCCGTAGTTTCCACGCGTCCAGC-3′; BUB3 rev erse, 5′-CCGCTCGAGCGG GAAACGGGATCCCCTGC GAA-3′. The PCR products were cloned into the KpnI/XhoI site of the pGL3-basic plasmid (Promega, Madison, WI, USA). The correct sequences of all clones were verified by DNA sequencing. The NSCLC cell lines H1299 and A549 were transfected with each reported construct and pRL-SV40 vector (Promega), using Effectene transfection reagent (Qiagen, Hilden, Germany). The cells were collected 48 hour after transfection. Luciferase activity was measured using the Dual-Luciferase® Reporter Assay System (Promega) and the results were normalized based on the activity of Renilla luciferase. All experiments were performed in triplicate.

To evaluate the potential effect of AURKB rs1059476G>A, which substitutes threonine with methionine at codon 298, the three-dimensional model of the Aurora kinase (PDB ID: 4AF3) SNP variant type was obtained by in silico substitution of Thr298 by Met without altering the backbone geometry, using Pymol program (http://pymol.org). The surface electrostatic potential was calculated using DelPhi calculation and displayed using Pymol.

The 293T cells were cultured in Dulbecco’s modified Eagle’s medium supplemented with 10% heat-inactivated fetal bovine serum. Cells were seeded in a six well plate as the cells were approximately 80~90% confluent. At the next day, cells were transfected with pCMV6-AURKB-wild-type (T298), pCMV6-AURKB-variant-type (M298), or pCMV6 empty vector using the Lipofectamine 2000 (Invitrogen, Carlsbad, CA, USA) according to the manufacturer’s protocol. After two days from transfection, cells were harvested.

OS was measured from the day of surgery to the day of death or last follow-up. DFS was counted between the day of surgery and recurrence or death from any cause. The Kaplan-Meier test was performed to assess OS and DFS according to genotype. The aHR and 95% CI were calculated using multivariate Cox proportional hazard models, adjusted for age (< 65 years vs. ≥ 65 years), gender (female vs. male), smoking status (never vs. ever), histological type (squamous cell carcinoma vs. adenocarcinoma), pathological stage (stage I vs. stage II or IIIA), and adjuvant therapy (yes vs. no). A P value of less than 0.05 was considered statistically significant. The statistical data were obtained using Statistical Analysis System for Windows, version 9.2 (SAS Institute, Cary, NC, USA).

This research was supported by the Basic Science Research Program through the National Research Foundation of Korea (NRF) funded by the Ministry of Education (grant number: NRF-2014R1A6A3A01008953), in part by a grant of the Korea Health Technology R&D Project through the Korea Health Industry Development Institute (KHIDI), funded by the Ministry of Health & Welfare, Republic of Korea (grant number: HI14C0402).