Deregulated expression of circular RNA (circRNA) has been determined to be important in carcinogenesis and progression; however, in the most common type of primary malignant bone tumor osteosarcoma, the roles of circRNA in cancer development still remain to be elucidated. Here, we found that circRNA UBAP2 (circUBAP2) expression is significantly increased in human osteosarcoma tissues as compared to those in matched controls. Increased circUBAP2 expression was significantly correlated with human osteosarcoma progression and prognosis. Furthermore, increased circUBAP2 could promote osteosarcoma growth and inhibit apoptosis both in vitro and in vivo. Mechanistically, circUBAP2 was found to inhibit the expression of microRNA-143 (miR-143), thus enhancing the expression and function of anti-apoptotic Bcl-2, which is a direct target of miR-143. Together, our results suggest the roles of circUBAP2 in osteosarcoma development and implicate its potential in prognosis prediction and cancer therapy.

Circular RNA (circRNA) is a new class of endogenously expressed non-coding RNA, which is characterized by covalently closed loop structures with neither 5’ to 3’ polarity nor polyadenylated tail [1, 2]. CircRNA is conserved in mammals and seems to be specifically expressed in a cell type or developmental stage, which may indicate that it participates in diverse physiological and pathological processes [3–6]. Currently, it is accepted that endogenously expressed circRNAs contain conserved microRNA (miRNA) target sites, and function as miRNA sponges to regulate the expression of target genes in mammals. Up to now, the deregulation of circRNAs has been suggested in a set of human diseases, especially cancer progression [7–14]. However, it is still an ongoing process to reveal the expression profiles of circRNAs and elucidate and functions of deregulated circRNAs in cancer development.

Just like the extensive studies of microRNAs (miRNAs) in cancer biology, the roles of circRNAs in carcinogenesis and progression have attracted much attention. Recently, the expression profiles of circRNAs in some types of cancer tissues have been elucidated, such as colorectal cancer, hepatocellular carcinoma, and gastric cancer [15–18]. Among them, some deregulated circRNAs have been found to be potential biomarkers in cancer diagnosis and prognosis identification [19–23]. These observations have strongly suggested the potential usage of circRNAs in clinical practice for the treatment of cancer patients. However, it remains to be investigated that whether circRNAs are deregulated and participate in the carcinogenesis and progression of osteosarcoma.

Osteosarcoma is the third most common cancer in childhood and young adults and the most common cancer of bone characterized by an aggressive clinical course [24]. For patients having no metastatic disease at diagnosis, the 5-year survival is 60% to 70% [25]. However, for patients who present with metastatic disease or whose tumor recurs, the clinical outcomes are far worse [26]. Currently, the mechanisms responsible for the oncogenic insults in the initiation and progression of osteosarcoma are still not fully elucidated. To date, non-coding RNAs including miRNAs and long non-coding RNAs have been extensively studied in osteosarcoma development [27–29]. However, as a new class of endogenously expressed non-coding RNA, the roles and mechanisms of circRNAs in osteosarcoma carcinogenesis and progression still require further investigation.

In order to identify the deregulated circRNAs in osteosarcoma, we obtained paired clinically resected osteosarcoma tissues and adjacent normal tissues, and examined the expression profile of circRNAs using microArray in this study. CircRNA UBAP2 (circUBAP2) was found to be the most markedly increased circRNA in osteosarcoma tissue as compared to that in matched adjacent control. Thus, we focused on the roles and underlying mechanisms of circUBAP2 in osteosarcoma development, including clinical stages, patient survival, and cancer biology properties, so as to suggest new mechanisms of osteosarcoma progression and potential targets for cancer treatment and prognosis prediction.

The expression of circRNA circUBAP2 was increased in osteosarcoma 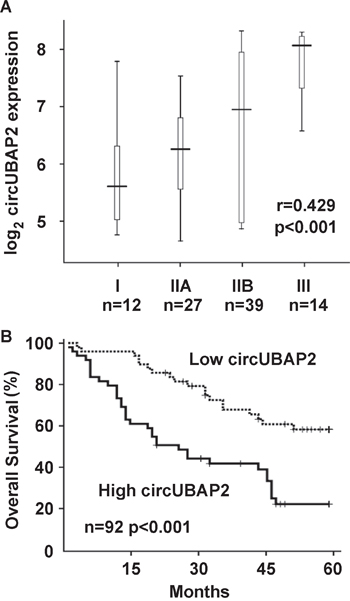 CircUBAP2 promotes osteosarcoma growth both in vitro and in vivo 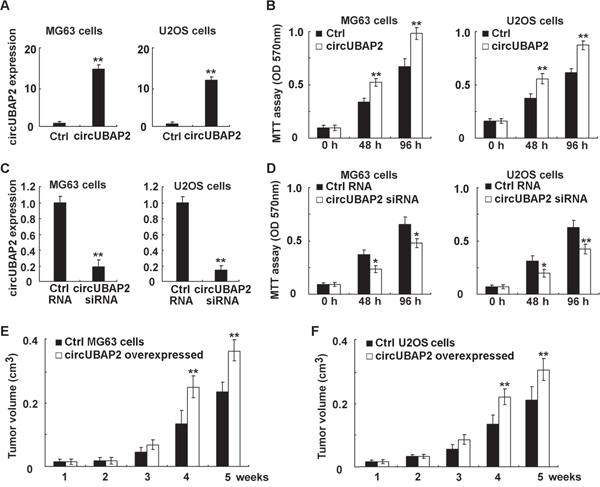 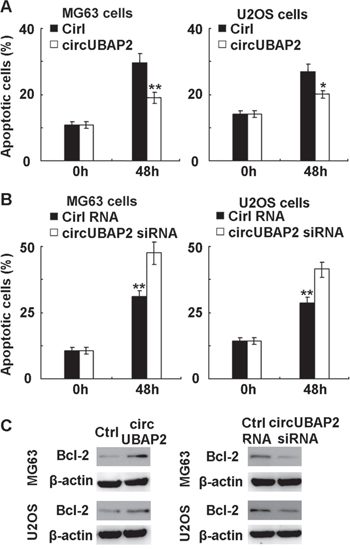 The underlying mechanism responsible for the inhibitory effect on cell apoptosis mediated by circUBAP2 was then studied. We screened the expression of intracellular molecules associated with cell apoptosis in circUBAP2 overexpressed MG63 and U2OS cells, including Bcl-2, Mcl-1, Bax, Bim, Bad, Ras, Bid, FADD, Bcl-xL, PTEN, XIAP, and phosphorylated ERK and Akt, and found that anti-apoptotic Bcl-2 expression was significantly increased by circUBAP2 overexpression (Figure 4C). Furthermore, knockdown of circUBAP2 inhibited the expression of Bcl-2 in MG63 and U2OS cells. As Bcl-2 is an important anti-apoptotic molecule well-accepted to protect osteosarcoma cells from apoptosis [30, 31], we conclude that circUBAP2 may inhibit osteosarcoma cell apoptosis by upregulating Bcl-2 expression.

CircRNAs may function as miRNA sponge to bind miRNAs and regulate expression of target genes. We then analyzed the association between circUBAP2 and miRNAs. Using MiRanda prediction algorithms (http://www.microrna.org/), a set of miRNAs were predicted to have potential interaction with circUBAP2, including miR-150, miR-135, miR-101, miR-181, miR-23, miR-149, miR-139, miR-491, miR-124, miR-301m miR-328, miR-122, miR-186, let-7, miR-132, miR-191, miR-425, miR-125, miR-149, miR-143, and miR-146a. To find the direct interacted miRNAs with circUBAP2 in osteosarcoma cells, circUBAP2 specific probe was used to perform RNA precipitation (RIP) as reported [32]. CircUBAP2-associated RNAs were precipitated by the specific probe, and the potential miRNAs predicted by miRanda were detected using qRT-PCR. Among them, we found a specific enrichment of miR-143 in the precipitates of circUBAP2 (Figure 5A and 5B), suggesting that miR-143 is the circUBAP2-associated miRNA in osteosarcoma cells. 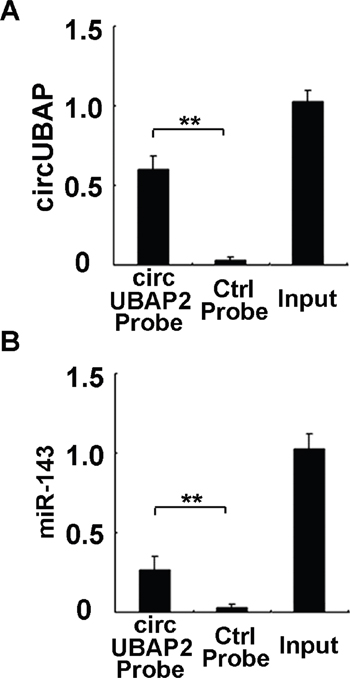 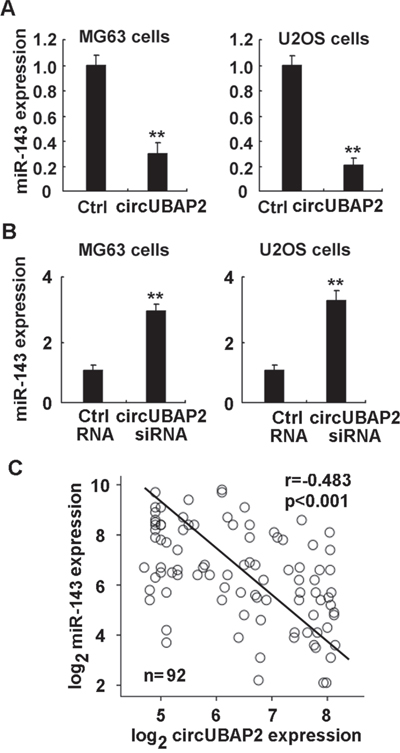 Figure 6: CircUBAP2 functions as the sponge of miR-143. (A, B) MG63 and U2OS cells were transfected with circUBAP2 expressing plasmids (A) or siRNA (B) as indicated, miR-143 expression was examined using qRT-PCR. (C) Correlation between miR-143 and circUBAP2 level in osteosarcoma tissues was statistically analyzed by Pearson’s correlation coefficient assay, and r and p values were shown as indicated. Data are shown as mean ± s.d. (n = 4). Similar results were obtained in three independent experiments. **, p<0.01.

Human osteosarcoma tumor tissues and matched adjacent normal tissues were surgically resected from 92 primary osteosarcoma patients during operation. The detailed clinical information of these patients was presented previously [11, 12]. These tissues were quickly frozen in liquid nitrogen after surgical resection. All these samples were collected with the informed consents of these patients, and were approved by the ethics committee of Second Military Medical University, Shanghai, China.

circRNA microArray of osteosarcoma tissue and matched control tissues were performed using circRNA chip provided by Arraystar containing the specific probes for human circRNA. Total RNA of tumor and control tissues was extracted using TRIZOL reagent (Invitrogen) and passed the quality control for RNA integrity. The samples were hybridized and washed in the circRNA microArray chips, and the signals were scanned and gathered as the standard protocol [35].

The in vitro cell proliferation assay of osteosarcoma MG63 and U2OS cells were presented as we reported previously [33, 35, 36]. In brief, cells were seeded into 96-well plates, transfected, and analyzed using MTT method in the indicated time periods. The absorbance was measured at 570 nm.

All animal experiments were performed according to the National Institute of Health Guide for the Care and Use of Laboratory Animals. Osteosarcoma MG63 and U2OS cells (1×106) were suspended in 0.1 ml PBS and injected subcutaneously into the posterior flank of BALB/c athymic nude mice. Tumor growth was measured as we described previously [33, 35, 36].

Osteosarcoma MG63 or U2OS cells were transfected as indicated. At 48 hours post transfection, spent cell culture medium was replaced with serum free DMEM and subjected to hypoxia. In the indicated time periods post serum deprivation and hypoxia, cells were harvested, washed, resuspended in the staining buffer, and examined with Vybrant Apoptosis Assay kit (Invitrogen). Stained cells were detected by FACSCalibur and data were analyzed with CellQuest software (both from Becton Dickinson). The Annexin V-positive cells were regarded as apoptotic cells [33].

In CircUBAP2-overexpresed MG63 cells, the cells were fixed, lysed and sonicated. After centrifugation, 50 ul of the supernatant was used as the input control and the rest was incubated with circUBAP2 specific probes-streptavidin beads (Invitrogen). Biotin-labeled circUBAP2 probe was synthesized by Sangon Biotech, and the sequence is 5’-AAT TCT TTT TCT TAC ACC CTA CAG-3’. Then, the beads-probe-circRNA precipitates was washed and incubated with proteinase K to reverse the formaldehyde crosslinking. And the precipitated RNA was finally extracted and examined by qRT-PCR.

Osteosarcoma MG63 and U2OS Cells were lysed with M-PER Protein Extraction Reagent (Pierce) supplemented with protease inhibitor cocktail (Calbiochem). Protein concentrations were measured with BCA assay (Pierce) and equalized with the extraction buffer. Equal amount of the extracts were loaded and subjected to SDS-PAGE, transferred onto nitrocellulose membranes, and then blotted. Antibodies specific to human Bcl-2 and β-actin, and horseradish peroxidase-coupled secondary antibodies were reported previously [33].

We thank Prof. Zhiwei Wang and Prof. Yue Wang for their helpful discussion, and Ms Jianfang Chen and Liqing Fu for their excellent technical assistance. This project was supported by grants from the National Natural Science Foundation of China (81572637, 81272942, 81202122, and 30973019).

The authors indicate no potential conflicts of interest.