Preoperative staging of gastric cancer with computed tomography alone exhibits poor diagnostic accuracy, which may lead to improper treatment decisions. We developed novel patient stratification criteria to select appropriate treatments for gastric cancer patients based on preoperative staging and clinicopathologic features. A total of 5352 consecutive patients who underwent gastrectomy for gastric cancer were evaluated. Preoperative stages were determined according to depth of invasion and nodal involvement on computed tomography. Logistic regression analysis was used to identify clinicopathological factors associated with the likelihood of proper patient stratification. The diagnostic accuracies of computed tomography scans for depth of invasion and nodal involvement were 67.1% and 74.1%, respectively. Among clinicopathologic factors, differentiated tumor histology, tumors smaller than 5 cm, and gross appearance of early gastric cancer on endoscopy were shown to be related to a more advanced stage of disease on preoperative computed tomography imaging than actual pathological stage. Additional consideration of undifferentiated histology, tumors larger than 5 cm, and grossly advanced gastric cancer on endoscopy increased the probability of selecting appropriate treatment from 75.5% to 94.4%. The addition of histology, tumor size, and endoscopic findings to preoperative staging improves patient stratification for more appropriate treatment of gastric cancer.

Major guidelines for gastric cancer treatment recommend that decisions are to be made based on clinical staging, primarily achieved with the use of computed tomography (CT) [6-8]. With advances in equipment, development of contrast materials, and applications of stomach cancer-specific protocols, the diagnostic accuracy of CT scans for gastric cancer has improved considerably. The overall diagnostic accuracies of CT scans in predicting tumor depth and nodal status range from 71.4% to 88.9% and 75.9% to 78%, respectively [9-12]. Nevertheless, such accuracies are insufficient for proper treatment decisions. Moreover, studies on preoperative, multimodal treatments have included patients with pathologically early stage gastric cancer who do not require any perioperative or preoperative chemotherapy.

Although many studies have evaluated the accuracy of clinical staging using CT scans for gastric cancer, most have analyzed its accuracy in regards to depth of invasion or nodal status separately. Few studies have focused on evaluating diagnostic accuracy in relation to overall clinical staging. Furthermore, no study has attempted to identify risk factors for inappropriate treatment decisions caused by inaccurate clinical staging, and no study has evaluated clinicopathologic features that may help improve patient stratification for proper decision making.

Patient demographics and clinicopathological characteristics are summarized in Table 1. There were 3491 men and 1861 women in the current study. The mean age was 57.9 ± 11.9 years. The mean tumor size was 3.6 ± 2.7cm. The tumors were located mainly in the lower third (58.8%) and lesser curvature (43.5%) of the stomach. Histologically, undifferentiated tumors were predominant (56.6%), compared to differentiated ones (43.4%). In preoperative clinical staging based on analysis of CT images, the majority of patients were classified as clinical T1 stage (52.3%) and clinical N- stage (69.4%). On pathological staging, T1 (56.3%) and N-(64.5%) tumors were most common.

Table 2: Correlation of clinical and pathologic stage for depth of invasion and nodal status. 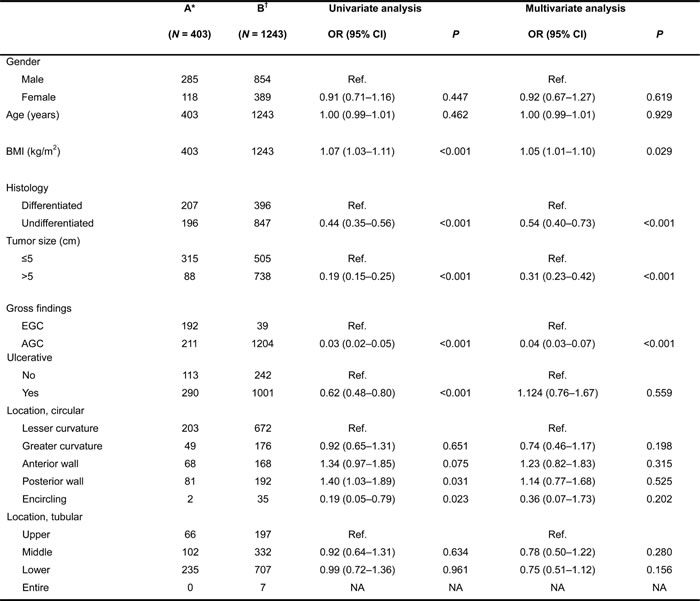 In the present study, the accuracies of estimating depth of invasion and nodal involvement on CT scans alone were 67.1% and 74.1%, respectively. The accuracy of overall staging was only 53.3%. More specifically, 35.5% and 34.3% of patients were overestimated for clinical T2-3 classification and node positivity, respectively. When we additionally considered the clinicopathologic features identified in our study to be associated with proper patient stratification, the probability thereof improved from 75.5% to 94.4%.

When deciding on a treatment modality before surgery, physicians must take into account the integrated clinical stage of each patient; however, preoperative staging based on CT scans alone can be inaccurate. Nevertheless, few studies have attempted to evaluate the accuracy of overall clinical staging using CT scans alone. In the current study, we found that the accuracy thereof in gastric cancer patients was only 53.3%.

Treatment modalities are commonly selected according to clinical stage. Japanese gastric cancer treatment guidelines state that there is no established benefit of neoadjuvant chemotherapy for gastric cancer patients. Meanwhile, Western guidelines recommend neoadjuvant chemotherapy or surgery for patients with stage II disease or higher (cT2-3N+ or cT4N-/+) [13]. The present study, however, found that the probability of delivering inappropriate treatment was 24.5% when relying on CT scans alone to conduct preoperative clinical staging. When we considered clinicopathologic features of histology, tumor size, and endoscopic findings, the probability of delivering an inappropriate treatment modality decreased to 5.6%.

Our results indicate that undifferentiated histology, tumors larger than 5 cm, and grossly AGC appearance on endoscopy are independently associated with a higher probability of reaching a proper treatment decision. To the best of our knowledge, this study is the first to evaluate clinicopathologic features that can improve stratification of patients with gastric cancer. When we applied the identified clinicopathologic features, the likelihood of proper patient stratification increased from 75.5% to 94.4%. Therefore, by considering these clinicopathologic features, physicians can spare patients with early staged tumors, who can be cured by surgery alone, from unnecessary pretreatment.

Neoadjuvant chemotherapy has been commonly used to treat resectable gastric cancer in Western countries. Its application is based on two large phase III clinical trials [13, 14], which demonstrated that perioperative chemotherapy facilitated significant improvements in resectability, disease-free survival, and overall survival, compared to surgery alone. However, despite these favorable results, the studies were critically limited in that no standard clinical staging method was applied at the time of randomization. As a result, patients in the surgery-only group with pT1 and pN- classification comprised 8.3% and 26.9%, respectively, of patients in the MAGIC trial [13]. Also, in the FNCLCC/FFCD trial [14], patients with a pN- classification accounted for 20% of the surgery-only group [13, 14]. This means that similar proportions of patients that did not need chemotherapy were included in the perioperative chemotherapy groups in those studies. Accordingly, physicians should caution against applying unnecessary neoadjuvant chemotherapy to early stage patients, as doing so introduces greater medical expense, causes suffering due to serious side effects, and postpones the timing of surgery. By applying the clinicopathologic risk factors shown to be significant for proper patient satisfaction in the current study, which are readily collected during routine patient evaluations, physicians can protect their patients from unnecessary neoadjuvant chemotherapy. In our study, the number of candidates receiving unnecessary neoadjuvant chemotherapy could have been decreased from 403 to 30 patients among 5352 patients.

This study is superior to previous studies for the following reasons: First, we utilized data from a large-scale database collected over a relatively short period. Additionally, CT scans and resected specimens were evaluated, respectively, by radiologists and pathologists specializing in upper gastroenterology at a single, high-volume center. As well, preoperative staging was evaluated using CT scans acquired following a stomach cancer-specific protocol. Therefore, the data were of similar quality and highly reliable.

Current practices for treating gastric cancer based on preoperative staging with CT scans alone are associated with a high probability of improper treatment decisions due to low diagnostic accuracy. By additionally considering clinicopathologic features of histology, tumor size, and endoscopic findings, more appropriate treatment strategies can be established.

A retrospective review of a prospectively maintained database for gastric cancer revealed a total of 6125 consecutive patients who underwent gastrectomy for primary gastric cancer from January 2005 to December 2010. We excluded patients from the analysis who fulfilled the following criteria: (1) received neoadjuvant therapy (n = 102); (2) received a preoperative or postoperative diagnosis of distant metastasis (n = 153); (3) did nothave adenocarcinoma (n = 101); and (4) were not examined with CT following a stomach cancer-specific protocol (n = 417). Finally, 5352 patients were included for analysis. (Figure 1) This study was reviewed and approved by the Institutional Review Board of Severance Hospital, Yonsei University Health System (4-2013-0510). 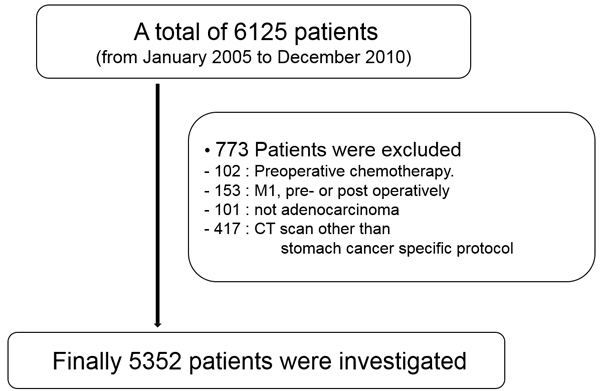 Preoperative staging was conducted based on CT scans taken in accordance with a stomach cancer-specific protocol. The equipment was a 16- or 64-detector row CT scan (Sensation 16 or 64; Siemens Medical Solutions, Germany). Each patient fasted for 4 hours before the CT examination. Before the CT scan, patients were injected with 10mg of butylscopolamine bromide (Buscopan; BoehringerIngelheim, Germany) to minimize bowel peristalsis and to induce hypotonia. Images were acquired from the level of the diaphragm to the symphysis pubis with detector collimations of 16×0.75mm or 64×0.6mm. Other scanning parameters were as follows: 160 mAs; 120 kVp; table speed of 24 mm per rotation; and gantry rotation time of 0.5 seconds. For gastric distention, we initially used water as an oral contrast agent (800-1000ml). Beginning in January 2007, we used two packs of effervescent granules for gastric distention. CT scans were obtained with the patient in the supine position irrelevant to the ingested oral contrast. All patients received 120-150ml of contrast medium intravenously using an automatic injector at a rate of 3-4ml/s. Images were acquired in the arterial and portal phases. Axial and coronal images were reconstructed with a 3-mm thickness section and a 3-mm interval.

The CT scans were evaluated by radiologists specialized in upper gastrointestinal imaging. Mural invasion of gastric cancer into the gastric wall was classified according to previously published criteria [19-22]. A cT1 lesion was defined as non-visualization of an abnormal mural lesion or mucosal thickening with enhancement (cT1a) or visualization of a low attenuation stripe at the base of the lesion, corresponding to the submucosal layer (cT1b). A cT2-3lesion was defined as a thickening of the gastric wall with a loss or disruption of a low attenuating stripe and a clear and smooth outer gastric surface around the lesion. Since CT criteria for cT3 (subserosal layer) lesions have not been established and the serosal layer of the gastric wall is not visible on CT images, differentiation of cT2 (proper muscle layer) from cT3 lesions on CT images is nearly impossible. Thus, we defined cT2 and cT3 lesions as cT2-3. All cT4a lesions demonstrated nodular or irregular outer borders of a thickened gastric wall or perigastric fat infiltration, and all cT4b lesions showed the changes described for cT4a lesions in addition to extension into adjacent organs. Positive lymph nodes were identified on the basis of a size larger than 8 mm along the short axis [23]. According to this criterion, nodal status on CT scans was classified as follows: cN-, no significant lymph node enlargement, or cN+, lymph node enlargement.

We would like to thank Anthony Milliken for his help with editing the manuscript. We acknowledge the assistance of BioScience Writers, LLC (Houston, TX, USA) in copyediting of the manuscript and corrections of English language usage.

This work was supported by a grant from the National R & D Program for Cancer Control, Ministry of Health & Welfare, Republic of Korea [grant number 1320270].