Endometrial cytology, biopsy, and curettage have been the mainstays for accurately diagnosing lesions in the endometrial cavity. As these procedures are commonly performed in a blind manner, however, they do not always provide a definitive diagnosis. In addition, they are difficult to perform in patients with vaginal or cervical stenosis [1–3]. Transvaginal sonography has been proposed as the first-line diagnostic tool for evaluating endometrial thickness, but operator experience, the position of the uterus, and vaginal anomalies limit its usefulness. Because of its excellent soft tissue contrast resolution, multi-planar imaging capability, and post-processing tools, magnetic resonance imaging (MRI) is increasingly being applied for diagnosing endometrial diseases and as a problem-solving tool when there is a diagnostic dilemma [4–6].

Clinically, however, using conventional MRI to differentiate endometrial carcinoma from benign mimickers, such as polyps and submucosal myomas, remains challenging [7]. In contrast, diffusion-weighted imaging (DWI) is based on diffused, random motion of water molecules and provides information about cell density of a given tissue and the integrity of cell membranes [8]. It can be quantified using an apparent diffusion coefficient (ADC) or qualitatively assessed in biological tissues [9, 10].

In this study, we first obtained an ADC cutoff value via a retrospective study at 3T MRI. The ADC value was then validated prospectively to differentiate stage I endometrial carcinoma and its benign mimickers. This study aimed to investigate the feasibility of using the ADC value to differentiate early-stage endometrial carcinomas from benign mimickers. 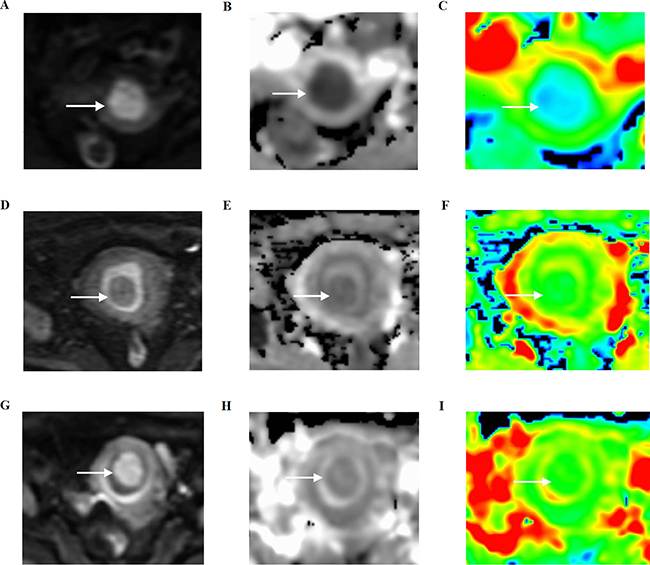 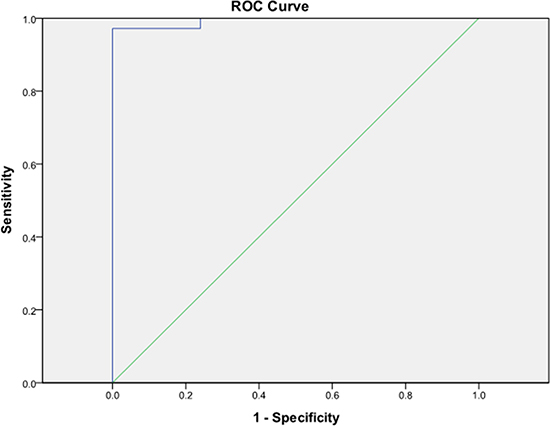 Table 1: ADC values from the literature and this study

Previous researchers [14, 15, 17, 19, 20] tried to find a simple, accurate way to differentiate between benign and malignant endometrial lesions. They used various cutoff ADC values as imaging biomarkers to achieve this goal. To our knowledge, however, few studies used 3T MRI, and few validated the effectiveness of these cutoff ADC values. The present study was performed in two stages to, first, obtain a cutoff ADC value at 3T MRI and, second, prospectively validate use of the ADC value.

Conventional MRI sequences, such as T1WI and T2WI, were generally use for evaluating endometrial lesions. Park et al. [7] reported that, on T2WI, intratumoral cystic changes and fibrous cores were seen less frequently in stage I endometrial carcinomas than in benign endometrial masses. In contrast, our study showed that fibrous cores and intratumoral cystic changes were seen more frequently in endometrial polyps than in endometrial cancer, in accord with Grasel et al.’s study [21]. Pedunculated lesions are usually considered benign. In the present study, only four benign lesions of the endometrium (4/35) were characterized as pedunculated. Hence, morphological features on T2WI might not be helpful in differentiating these lesions.

DWI is a functional imaging method based on the quantification of increased or restricted microscopic diffusion motions of tissue water molecules [14]. Increased tumor cellularity, which can restrict water diffusion, therefore decreases ADC values. Malignant lesions frequently have greater cellularity than benign lesions. Thus, ADC values can contribute to distinguishing between benign and malignant lesions [22–27]. Various cutoff ADC values have been used to differentiate malignant from benign uterine lesions [14, 15, 17, 19, 20]. These cutoff ADC values ranged from 0.908 × 10-3 mm2/s to 1.28 × 10-3 mm2/s. In this study, by applying the cutoff ADC value of 0.98 × 10-3 mm2/s, we achieved the greatest accuracy (98.3%).

There are some major differences between previous studies and the present one. First, the previously published cutoff values were obtained at 1.5T MRI in four studies [14, 15, 19, 20], and Takeuchi et al. [17] used both 1.5T and 3T systems. In this study, we performed 3.0T MRI in all patients to enhance the signal-to-noise ratio. A phantom study [28] confirmed that ADC values vary at 1.5T and 3T. Second, using different b values could affect the calculation of ADC values, causing variable results. Thus, it is difficult to establish a universal threshold for the ADC value. Third, because benign endometrial lesions and stage I endometrial carcinomas are similar, accurate diagnosis is difficult. Hence, all endometrial malignant lesions were known to be stage I endometrial carcinomas during the first stage of of this study. In contrast, previous studies included all endometrial carcinoma stages or carcinosarcomas. Lastly, the ADC value may relate to individual changes, such as age and body temperature, causing interpatient variation [29, 30].

In this study, we found that the ADC value for endometrial polyps was significantly higher than that for submucosal leiomyomas. Leiomyomas are composed of smooth muscle cells and collagen, which causes lower ADC values [31]. They are also associated with degeneration (e.g., hyalinization, edema), which occurs in more than 50% of leiomyomas [32]. Hyalinization leads to accumulation of homogeneous eosinophilic bands in the extracellular space, narrowing this space and thus decreasing ADC values [33]. In contrast, edema leads to increased ADC values because of widening of the extracellular space. The ADC value for leiomyoma is related to these histological findings and is thus complicated. Endometrial polyps contain endometrial glands and stroma or smooth muscle tissue. Cystic glandular hyperplasia generally develops in polyps. These changes can decrease cellularity and increase movement of water molecules, thus promoting increased ADC values [14, 34]. Further studies in larger samples are needed to investigate a cutoff ADC value for the differential diagnosis of endometrial polyps and submucosal leiomyomas.

The cutoff ADC value obtained during the first stage of the study was prospectively applied in the second stage to validate its effectiveness. The high kappa value for agreement regarding measured ADC values between two radiologists indicates that this ADC value could be used reliably to assess endometrial lesions. The sensitivity, specificity, and accuracy of differentiating malignant endometrial lesions from benign lesions were high. These results indicated that the ADC value acquired using DWI could be a potential quantitative and qualitative biomarker to differentiate benign and malignant endometrial lesions. ADC values, however, might not be measured accurately in some small endometrial masses. In this situation, DWI could enhance its diagnostic capability if it is combined with dynamic contrast enhancement.

Our study has some limitations. First, endometrial carcinomas, polyps, and submucosal myomas < 10 mm or thick endometrium were not included in this study to ensure relatively reliable results. Second, the sample size for the second (prospective) stage of the study was relatively small to validate the cutoff ADC value obtained from the first (retrospective) stage of the study. Nevertheless, a PubMed search revealed no other publications that prospectively validated the use of ADC as a biomarker in the endometrial cavity.

The study was designed into two stages. The first stage, a retrospective study, was performed to evaluate the diagnostic value of ADC and obtained a theoretical ADC cutoff value for differentiating benign and malignant endometrial lesions. The second stage, a prospective study, was performed to validate the ADC cutoff value obtained for differentiating between benign and malignant endometrial lesions.

MRI images were retrospectively and blindly evaluated by two radiologists during the first stage of the study, with discrepancies resolved by a consensus discussion. On DWI, high-, iso-, or low-signal lesions, compared with the normal endometrium signals, were identified. Myometrial invasion was diagnosed when the endometrial-myometrial junction was disrupted. We obtained a cutoff ADC value for differentiating malignant and benign lesions from ROC curve. Other cutoff ADC values were obtained from published studies [14, 15, 17, 19, 20], which along with our ADC, were used to calculate corresponding the sensitivity, specificity, and accuracy. During the second stage of the study, the cutoff ADC value obtained during the first stage was prospectively applied to the lesions to predict the diagnosis of either endometrial malignancy or a benign lesion.

ADC maps were generated from a built-in software package (GE Func Tool Version 4.5) using b = 0 and b = 1000 s/mm2 images. For each patient, a circular region of interest (ROI) (55 mm2) was created on central slices that contained the largest portion of the tumor. Each ROI was positioned on the solid area of the lesion while excluding any cystic and/or necrotic area and any endometrial tissue (Figure 4). The ADC values were then calculated automatically. The ROI was measured three times and the mean value recorded. 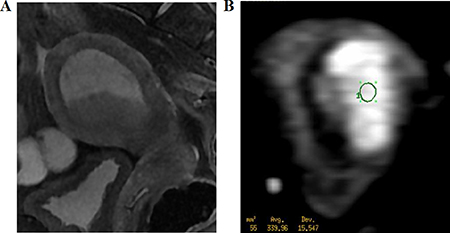 Figure 4: A 62-year-old woman with stage I endometrial carcinoma. (A) Sagittal T2WI shows the carcinoma with slightly high intensity (arrow). (B) Axial DWI shows a carcinoma with hyperintensity. The region of interest (55 mm2) was placed at the center of the lesion.

The Kolmogorov–Smirnov test was used to determine the normality of the data distributions of the ADC values for both stages of the study. For the first stage, Student’s t-test was applied to compare the ADC values of malignant and benign tumors and between endometrial polyps and submucosal leiomyomas. The ROC curve was used to obtain a cutoff ADC value for differentiating stage I endometrial carcinomas from benign lesions. The sensitivity, specificity, and accuracy were also calculated. For the second stage of the study, the cutoff ADC value attained during the first stage was prospectively applied to lesions to calculate its sensitivity, specificity, and accuracy to validate its diagnostic performance. The kappa test was used to assess the agreement between the two radiologists. SPSS software 18.0 (SPSS, Chicago, IL, USA) was used for the statistical analyses. P < 0.05 was considered to indicate statistical significance.

The paper was designed and described by Jinhong Wang and Zhihan Yan. It was written and analyzed by Xue Wang. Yu Zhao, Yumin Hu, Yongjin Zhou, Meimei Du and Anna Guo diagnosed the cases in this study and established the inclusion and exclusion criteria for the patients. Kun Liu, Guanghui Bai and Lezhen Jiang analyzed the data obtained and performed the statistical analyses.