Accumulating evidences indicated that tumor suppressor candidate 7 (TUSC7) is a putatively tumor suppressor gene in various tumors. We carried out current systematic review and meta-analysis to explore the decreased expression of TUSC7 associate with prognostic and clinicopathological characteristic in cancer patients. A literature collection search in the online electronic databases PubMed, Embase, Web of Science, and CNKI was conducted to obtain eligible studies (up to February 20, 2017). A total of nine studies comprise 757 patients were identified and included in present meta-analysis based on the selection and inclusion criteria. Overall, low expression of TUSC7 was associated with significantly unfavorable overall survival (OS) (HR = 2.90, 95% CI: 2.12–3.98, P < 0.001), disease free survival (DFS) (HR = 2.00, 95% CI: 1.49–2.68, P < 0.001) and disease-specific survival (DSS) (HR = 2.57, 95% CI: 1.23–5.39, P = 0.012) in tumors patients. Moreover, we also found that down-regulation of TUSC7 associated with distant metastasis (OR = 2.85, 95% CI: 1.46–5.55, P = 0.002) and larger tumor size (OR = 0.41, 95% CI: 0.23–0.72, P = 0.002). Our meta-analysis demonstrated that cancers patients detected with low TUSC7 expression were more prone to develop distant metastasis. TUSC7 might act as a potentially and promising common prognostic markers in some solid tumors.

Numerous studies have indicated that long noncoding RNAs (lncRNAs) are dysregulation in a variety of diseases, including cancer [1–5]. LncRNAs participate in regulating a wide range of biological processes at transcriptional and posttranscriptional levels [6], which play a key role in tumor genesis, progression and prognosis of cancers [2, 7–9]. Tumor suppressor candidate 7 (TUSC7), also called LSAMP antisense RNA3 (LSAMP-AS3) or lncRNA LOC285194, is a newly determined lncRNA, comprising 4 exons with length of about 2.1 kb and is situated at chromosome region of 3q13.31 [10]. It was first reported as a decreased expression gene in human osteosarcoma; depleting this lncRNA contributed to normal osteoblasts proliferation by regulating cell apoptotic and cell cycle transcripts as well as VEGF receptor 1 [10]. In addition, lncRNA TUSC7 serve as a p53-regulated tumor suppressor in gastric and colon cancer cells, in part by inhibiting miR-23b and miR-211 to inhibit cell growth, respectively [11–13]. Thence, TUSC7 is considered to be a tumor suppressor gene.

However, because of the limitations associated with the research design and sample size, single study may be inaccurate and inadequate. As such, it is necessary to systematically explore the potential clinical values of TUSC7 in cancers. Thus far, no meta-analysis has yet been conducted to assess the relation between TUSC7 expression and clinical outcomes in various tumors. Therefore, we collected all relevant publications and performed present systematic review and meta-analysis to detect the clinical values of TUSC7 expression level in various tumors. We mainly discussed the expression of TUSC7 associate with prognosis, metastasis and clinicopathological characteristics of cancer patients. It aimed to more precisely evaluate the association between TUSC7 expression and clinical consequence of human cancer.

As shown in the flowchart (Figure 1), a total of 77 reports were searched from Embase, Web of Science, PubMed, and CNKI. After the duplicates were excluded, 36 records were preserved. After reviewing the title and abstracts, 20 records were removed. After further inspection of the full text carefully, a total of 9 studies were ultimately identified according to the criteria [7, 12–19]. The 9 eligible studies comprise 757 patients and all came from China. Among these cancers included in this meta-analysis derived from eight different tumor types: pancreatic ductal adenocarcinoma [19], gastric cancer (GC) [12], esophageal squamous cell carcinoma (ESCC)[15], osteosarcoma (OSA) [16], hepatocellular carcinoma (HCC) [17], non-small-cell lung cancer (NSCLC) [7], colorectal cancer (CRC) [13, 14], and Glioma [18]. All of the TUSC7 expression level were detected by qRT-PCR and divided into high expression and low expression groups. All tumor patients were diagnosed based on pathology. The main characteristics of the include studies were summarized in Table 1. 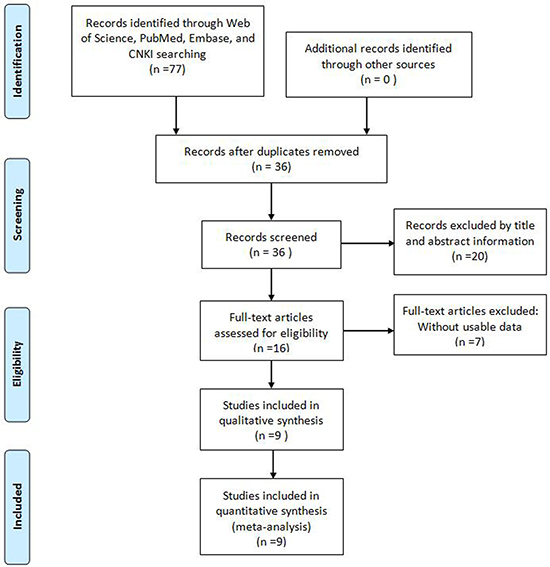 Figure 1: Flow diagram of the literature search and selection.

Table 1: Main characteristics of the include studies for prognostic

Association between TUSC7 and OS

The relationship between the expression level of TUSC7 and overall survival (OS) was detected in seven researches including 598 patients (Table 1). The fixed effects model was applied to calculate the overall hazard ratios (HRs) because of no heterogeneity among studies (I2 = 0.0%, P = 0.991). The pooled result (HR = 2.90, 95% CI: 2.12–3.98, P < 0.001) indicated that decreased TUSC7 expression exhibited a significantly shorter OS than those with high TUSC7 expression (Figure 2). Consequently, decreased TUSC7 expression associated with a worse survival in tumor patients. 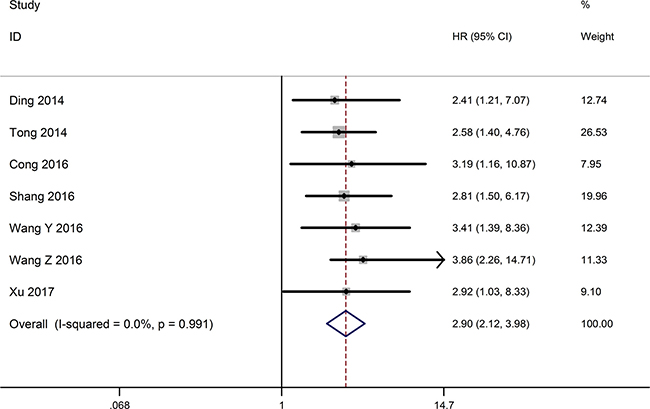 Figure 2: Forest plot for the relationships between decreased TUSC7 expression and OS.

Association between TUSC7 and DFS/DSS 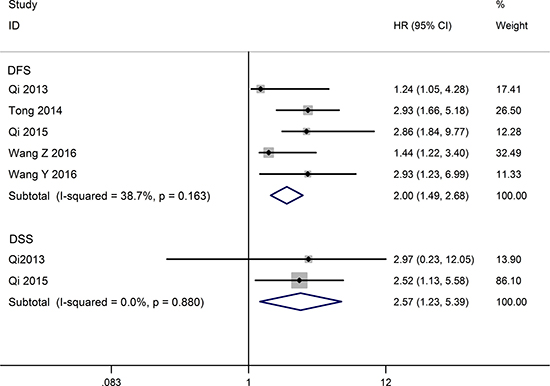 Figure 3: Forest plot for the relationships between decreased TUSC7 expression and DFS/DSS.

Associations between TUSC7 and clinicopathological parameters

From the pooled results showed in Table 2, it found that decreased TUSC7 expression was positively correlated with distant metastasis (OR = 2.85, 95% CI: 1.46–5.55, P = 0.002, fixed effects model) and tumor size (OR = 0.41, 95% CI: 0.23–0.72, P = 0.002, fixed effects model). However, no significant correlations were observed between the decreased TUSC7 expression and other clinicopathologic parameters involving lymph node metastasis, gender, clinical stage and invade depth (P > 0.05). Due to insufficient data, we were unable to detect the association between low TUSC7 expression and other clinicopathological factors.

Table 2: Odds ratio for the association between decreased TUSC7 expression and clinicopathological parameters

To evaluate the robustness of the summarized results in this study, a sensitivity analysis was conducted by successively excluding each individual study from the pooled analysis. The result of the relationship between TUSC7 expression and OS or DFS was not significantly influenced after excluding any study, suggesting that the results were robust (Figure 4). Considering that the small number of studies, sensitivity analysis of other groups has not been carried out. 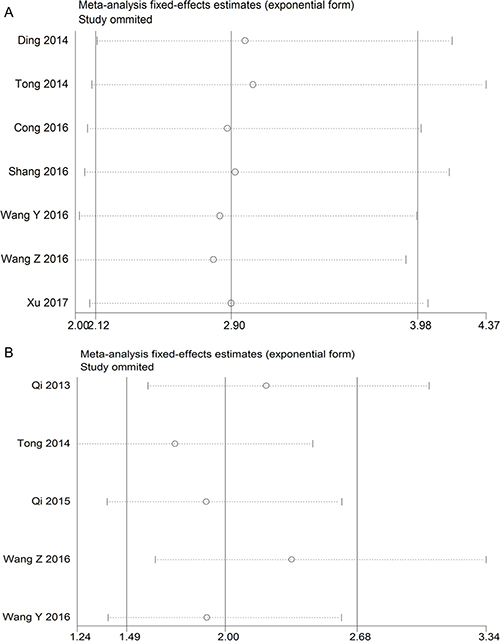 Figure 4: The sensitivity analysis for the meta-analysis of OS or DFS in tumor patients. (A) OS group; (B) DFS group. 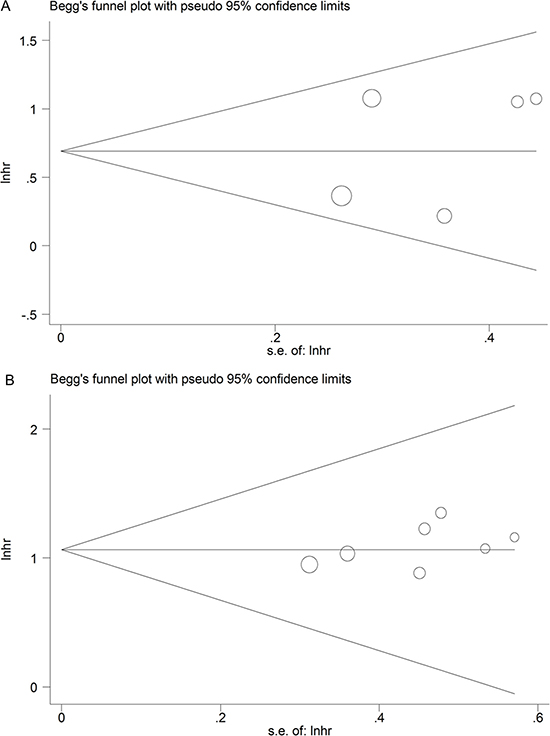 A lot of studies have proved that dysregulated expression of lncRNAs is closely related to tumorigenesis and cancer progression [21–24]. TUSC7 was a newly identified ncRNA gene, reported to be decreased expression in various cancer cells and tumor tissues as a tumor suppressor [7, 13, 16–19]. TUSC7 influences the proliferation, apoptosis, and cell cycle transcripts in normal osteoblasts [10]. Moreover, by repressing miR-23b transcription, TUSC7 inhibited cellular proliferation, migration and invasion and promoted cellular apoptosis in gastric cancer and glioma cells [12, 18]. Additionally, TUSC7 acts as a molecular sponge of miR-10a and suppresses EMT through decrease the expression of Eph tyrosine kinase receptor A4 in human hepatocellular carcinoma [17]. In addition, previous studies have reported that down-regulation of TUSC7 was associated with chemoresistance in ESCC [15]. Therefore, further explore the relationship between TUSC7 and cancer is absolutely necessary.

Although TUSC7 was found to be significantly correlated with the prognosis of cancer patients, some limitations should be concerned for explaining the results of this meta-analysis. For instance, only nine studies included in our meta-analysis and patients were all Asians from China, thence, our results may be suitable only to this Chinese population. Additionally, the cut-off values of decreased TUSC7 expression not consistent. Finally, there was significant heterogeneity in some clinicopathological parameters analysis. Thus, the results of this meta-analysis should be confirmed by future studies with well-designed and larger-size.

In conclusion, our meta-analysis offers evidence that low TUSC7 expression is a risk factor for distant metastasis in diverse cancers. TUSC7 could act as a potentially and promising prognostic markers in human some solid tumors.

Two investigators (Na Li and Wei Li) using the Newcastle-Ottawa Quality Assessment Scale (NOS) to assess the quality of all eligible studies independently, which were reported in previously studies [25, 26]. All included studies were considered to be of high quality based on NOS. The data from each eligible study were extracted and reviewed by two authors (Wei Li and Ke Shi) independently. Disagreements were discussed with third researcher (Na Li) to reach a consensus. The following information from every study was collected: first author’s name, publication date, study region, tumor type, detection method of TUSC7 expression, criteria of TUSC7 high expression, total patients amount, clinicopathological parameter, and survival analysis, follow-up period, HR and corresponding 95% CI. If the available survival data not shown in articles, corresponding authors were contacted to collect these data or extracted from graphical survival plots and HRs were estimated.

All statistical analysis of the present study was conducted by STATA SE 12.0 software (Stata, College Station, Texas). The heterogeneity of pooled HRs or ORs among included studies was detected using the Q-statistic test and chi-squared based. The fixed-effects model was used to pool the results when the included studies with small heterogeneity (I2 < 50%, P > 0.1). Otherwise, a random effects model was applied (I2 > 50%, P < 0.1). A sensitivity analysis was executed to evaluate the robustness of the overall results. The “Begg’s funnel plot” was used to assess potential publication bias. All the P-values less than 0.05 were regarded as statistical significance.

This work was supported by funding from the Key Program of Hunan province Science and Technology Hall (2015SK20662).

All authors declare that there is no conflict of interests.